I am a Luxury and Therefore a Necessity – Moonstone Review – Boardhammer 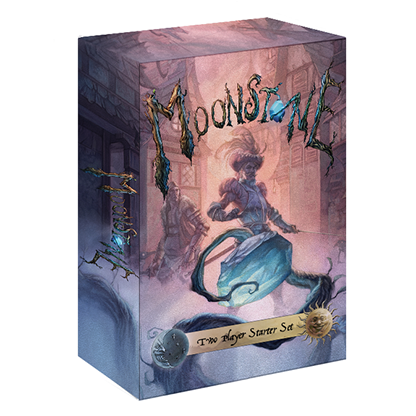 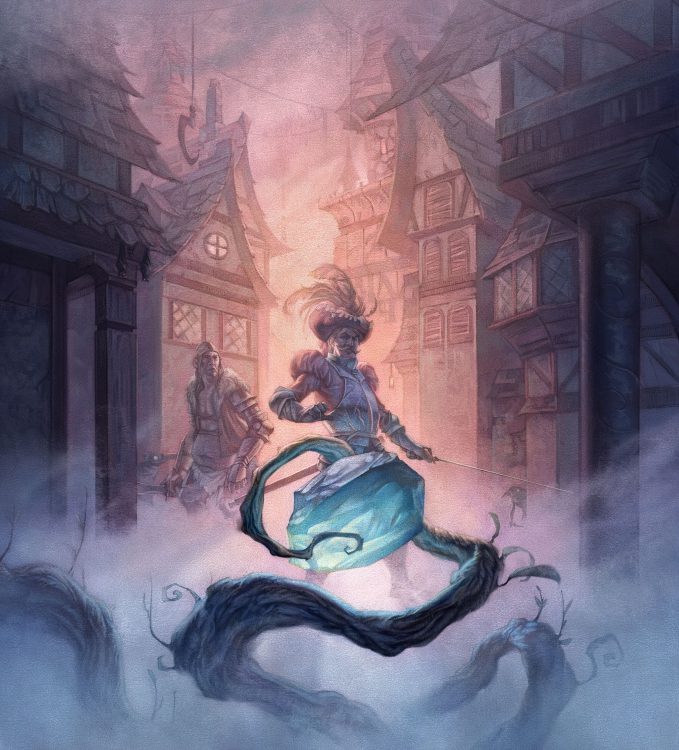 Ever since I was a kid, fairytales and fantasy stories were some of my favorites; my parents used to read them to me, and I grew up watching cartoon versions of them, before graduating to reading voraciously as a kid. At the same time I fell in love with Jim Henson’s muppets. Shows like Fraggle Rock captured my imagination along with the somewhat impenetrable comedy—for a kid my age—of the Muppet Show. Today, Jim Henson’s imagination is usually remembered in the frame of Sesame Street or the Muppets, but depending on when you grew up, Dark Crystal and the lesser known Storyteller might be kicking around in the back of your imagination. Storyteller was one of my first introductions to folklore and fairy tales that went outside of the usual child focused, Disney veneer of princes and princesses, and it remained a favorite of mine to this day. I remember seeing Moonstone on Kickstarter a few years ago, and one of my immediate reactions to it was “This reminds me of something…” but I couldn’t quite figure out what it was at the time. As time passed and I kept seeing Moonstone releases and battle reports on the internet, it suddenly clicked.

It reminded me of Storyteller and I knew I had to try it.

Before we get into the review, I do want to thank Tom from Goblin King Games for sending us a set of the game to review. We were provided with a 2 player starter set, 2 larger unit miniatures, and a full size copy of the rulebook. 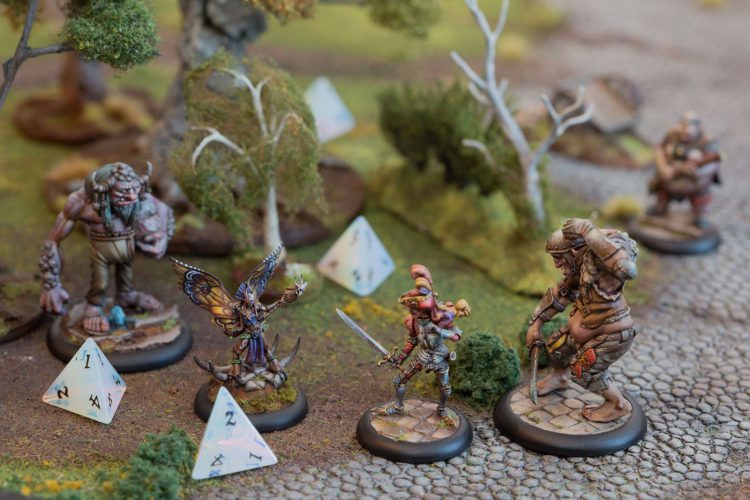 The world of skirmish, small sized miniature games is fairly crowded these days. While Warhammer dominates the larger scale battle market, there are many interesting and creative games out there taking fairly big risks to make names for themselves through complex game mechanics and interactions or flashy, detailed miniatures. Unfortunately, these games sometimems lack a certain spark that makes them interesting or necessary; many—especially miniature agnostic games—can struggle to stand out beyond the somewhat intriguing rule changes they make to the miniature wargaming hobby.

Something that Moonstone manages is that it builds an interesting, unique world. Far and beyond anything else this game accomplishes, the world that Moonstone builds feels lived in and unique, taking fairy tales, folklore, and European cultural cues to construct a world that is deeply fleshed out and personable. The rulebook is filled with lore, including character profiles, short stories, background, and even a map and timeline of the world of Tauber, where characters battle for control of the titular Moonstones out of a desire for profit more than anything else. Whimsical is an exceptionally good way to refer to Moonstone, as the character profiles list their hobbies as much as their stats. Nothing really “matters” in Moonstone, as Tauber is a world in which war is generally settled, and the squabbles over Moonstones are driven by personal desires and greed, rather than world ending dangers and challenges.

To that end, battles in Moonstone are generally fought over exactly that: Moonstones. At the beginning of a game, players drop a handful of d4s onto the table, and where they scatter to denote where moonstones will be for that match; the number on each die represents how “deep” the stones are. Various narrative missions feature slightly different victory conditions, but in general, games of Moonstone will be based on setting up a table, dropping the dice, and fighting over who can manage to collect the most by the end of 4 turns.  Perhaps the most unique mechanic in the game itself, it also feels thematically important to the overall world Moonstone builds, helping continue the strong impression it leaves after spending time with the game: a lot of thought went into this world, both in how it reads, and how it plays.

Playing in a New World 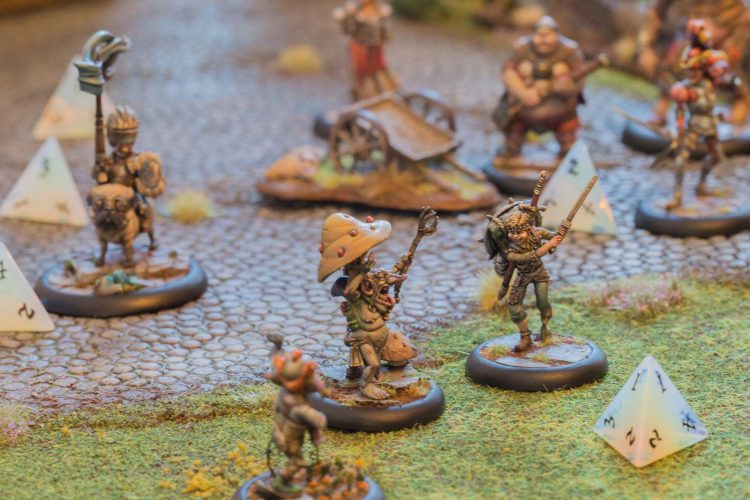 Fans of small skirmish games will probably find much of Moonstone’s systems fairly familiar. I saw a lot in common with Guild Ball, for example, such as allotting energy to various members of my party, having a varied but small band of about 5-6 models, and games taking place in fairly small scale–the default move action is a mere 4 inches–that usually devolves into various skirmishes over the moonstones on the board. The randomized drop of moonstones kept even repeat plays somewhat different, and we tried a few variants of dropping moonstones before and after placing terrain to see how things would change. There wasn’t much difference, frankly, and the game recommends not having terrain in the middle of your board, which seemed the most workable anyway. Combat is determined via a deck of cards that players share between them. Attackers and defenders draw a hand of cards determined by individual character stats; for example, a character with an attack of 6 would draw 6 cards, while a defender with defense 3 would draw 3.

Moonstone’s mechanics are fairly simple, but also fairly routine in this regard. If you’ve played many skirmish level games, you’ll likely find the game very easy to pick up and play, but that also means the game system itself doesn’t engender a lot of uniqueness; even the card mechanic feels somewhat similar to Malifaux,.While it uses a single, shared deck, the idea is somewhat similar. The biggest difference is that players do not know what cards they’ll actually draw ahead of time, which did sometimes lead to fairly inconclusive battle rounds, and even a few where the attacker got the raw end of the deal from a bad draw. Still, this kept things fun, and in some ways ensured that combat was not the biggest point of the game, but rather the procurement of—and then protection of—moonstones.

As a longtime Guildball player, I really took to Moonstone quickly, and in some ways it reminded me of that sort of planned set of actions. Do you send a character to get stuck in to combat, knowing they might get knocked out, solely so you can focus on an objective? Or do you try and decimate your opponent in combat so that the score, even as low as it might be, is still in your favor? That’s something to decide while playing. The various factions in Moonstone also help here, as players can select from various fantasy and folklore based troupes to play with that have their own playstyles. While each of them share a lot in common, there’s enough flavor and style in them to make them all different and unique, giving you lots of options.

And of course, there’s the miniatures themselves to talk about.

A Luxury Few Can Afford (to Miss) 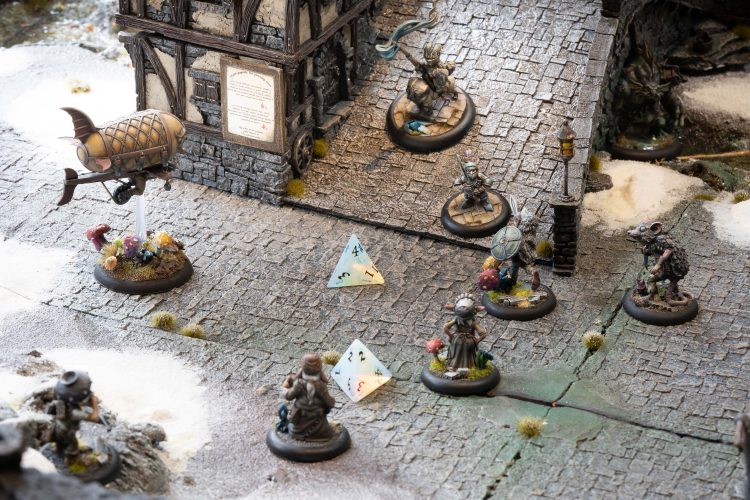 The D4s represent Moonstones, with the numbers denoting how deeply stuck in the ground they are. Credit: Goblin King Games

The thing that probably stands out to most first time viewers of Moonstone are the miniatures. In fact, if you like painting miniatures, this game may just be worth buying in to for that alone. The Henson-esque fantasy characters truly ooze charm, and the transition from sketches to sculpts is perhaps the closest I’ve ever seen in a miniature. Every character feels unique and charming, and almost every model has more detail than you’d imagine possible. Perhaps more than most other games I’ve seen, I actually felt like the art on the box was accurately represented in the miniatures I was building. Once assembled, their personalities really stood out.

Although this doesn’t reflect in the review, I did want to mention that Moonstone is currently changing printers for their miniatures, and some of the current line are out of stock. The ones I received were printed by the newer printer, although I do believe some older printings may still exist. However, from the ones I have, the quality was excellent, and the pieces fit together exceptionally well after a quick scrub with soap and water. Although there were a few fiddly pieces, I didn’t find any particular miniature hard to build, and frankly I saw little need to break out greenstuff for much gap filling. Iin fact, I believe I only used a small amount mostly for personal taste of filling a few connections between arms and shoulder pieces, but this is certainly a personal taste rather than quality of life issue.

The rulebook and two player set are similarly quality, coming with a bespoke measuring widget that players can share, acrylic tokens to represent energy, and dice for the moonstones. The full rulebook is a gorgeous hardcover filled with art to coincide with the rules and lore, and it’s perhaps one of my favorite books on my gaming shelf. 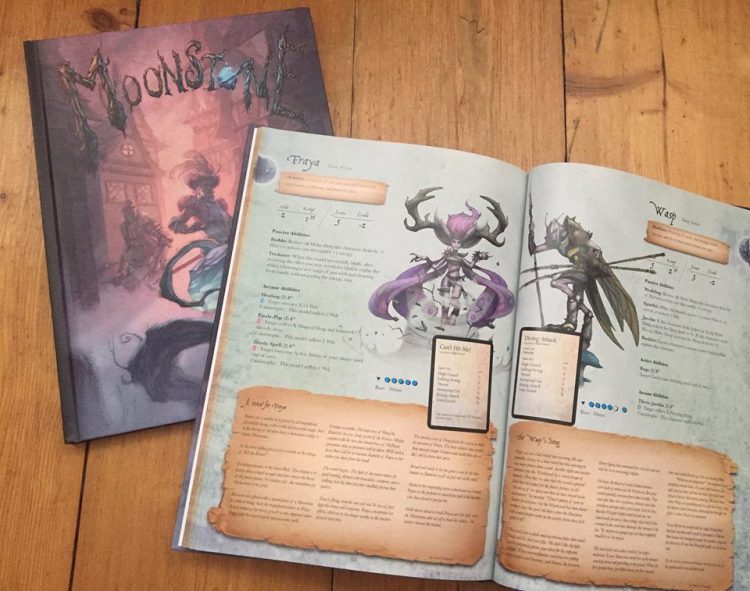 The Moonstone Rulebook is gorgeous and flavorful on it’s own. Credit: Goblin King Games

There is certainly no shortage of miniature games vying one’s attention, and the small skirmish game market in particular has seen exponential growth in the last few years. I think Moonstone is a possibly overlooked gem in this regard, a victim of a crowded market that doesn’t always cater to whimsy as much as it does “rule of cool”. I will say that most Moonstone miniatures don’t evoke a sense of “cool”, but they are gorgeous, and the character of every model stands out (Baron von Fancyhat’s extended pinky, for example, is a really great detail). If you’ve ever wanted a miniature game that doesn’t go for edgy, but rather for pure fantasy, Moonstone is a game I highly recommend checking out. While it may not be a big selling point for some, Moonstone is perhaps one of the first miniature games to win my mother’s seal of “oh how cute!” approval, and there’s something to be enjoyed in a game that is fairly approachable, yet tactical. Thanks to COVID, my ability to play most games out of my house is negated, but while testing the game, my mother wanted to know how to play, something that she’s never asked before with most other grimdark styled games or overly complex rules.

And, perhaps, that’s the best way to sell Moonstone. A tactical, fairytale fantasy themed game that is approachable and evocative. The rules are clear and well thought out, the game is drenched in theme, and the small footprint of the game makes it a fairly great contender for your kitchen table. It requires a 3×3 space and scant terrain; a few pieces of scatter, or even some DIY walls, trees, and barriers would do you well to play and enjoy Moonstone. The somewhat “all ages” aspect of the game is a nice touch as well, and the game would make a fantastic entry for younger players or non-wargamers to try. There’s just enough darkness to feel mature, thanks to the fairytale stylings, and the comedy and detail of some of the characters evokes a fairly wry smile without feeling too silly or childish.

Those looking for extensively deep gaming might not find it in Moonstone, but I found the game fun and challenging, and certainly falls into the easy to teach, difficult to master category. Where the game goes from here is also to be seen, as a rumored second book might be on the horizon that could introduce new mechanics, but there hasn’t been anything concrete yet. Personally, I’m looking forward to spending more time with Moonstone, and with holiday time off, to actually get to paint these minis with the time and attention they deserve. Until then, though, I’ll get a few more games in, and perhaps see if I continue to have that Henson-esque sense of wonder that the game first instilled in me. Like the Storyteller series, it’s sometimes dark, sometimes cheery, but always fun and memorable.