Necromunday: Houses of the Underhive – Goliath 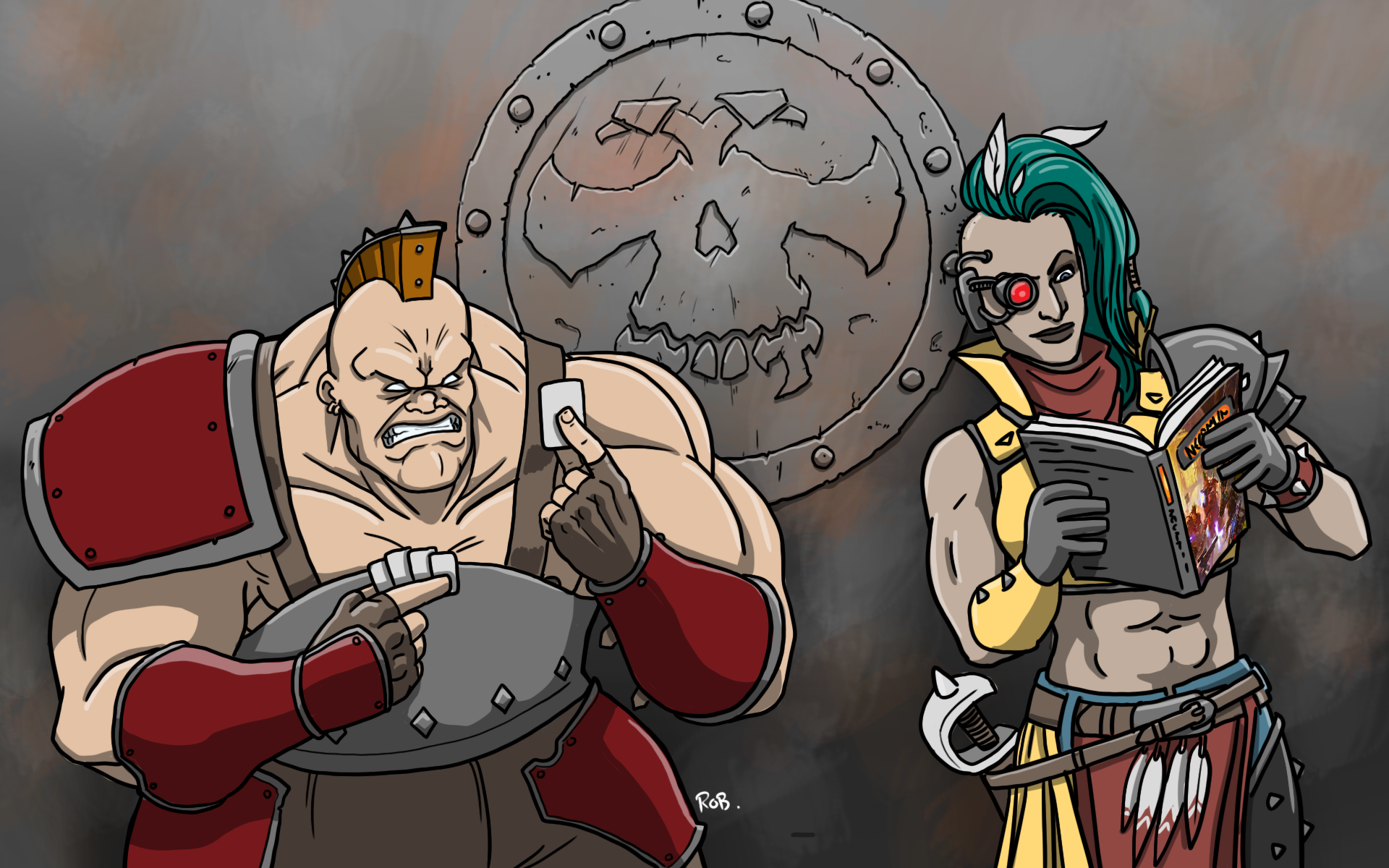 If you’re reading this, be aware that much of the information contained has been obsoleted by the House of Chains book.

Welcome back, Scummers! This week we’re covering one of the initial gangs released with the Necromunda reboot, and easily one of the deadliest. Now, as Dan and I realistically know very little about Goliaths beyond “Don’t let them charge you,” and “Oh no I got wrecked again,” we’re turning the column over to our resident expert SRM. Take it away, Campbell!

Lord Helmawr seeing a Goliath ganger for the first time.

Sorry to disappoint y’all, but this is my wheelhouse so you’re stuck with me this week!

I’ll be covering the basics while the ever-dutiful Merton will handle the tactics, strategies, and things I’m generally too dense to think about. Just pretend I’m roleplaying as a Goliath ganger.

Now sit back, get some bicep curls in, and have a shot of Sumpkroc, because we’re about to get into it with my favorite gang in Necromunda: the beefy bois of House Goliath.

Houses of the Underhive – Goliath 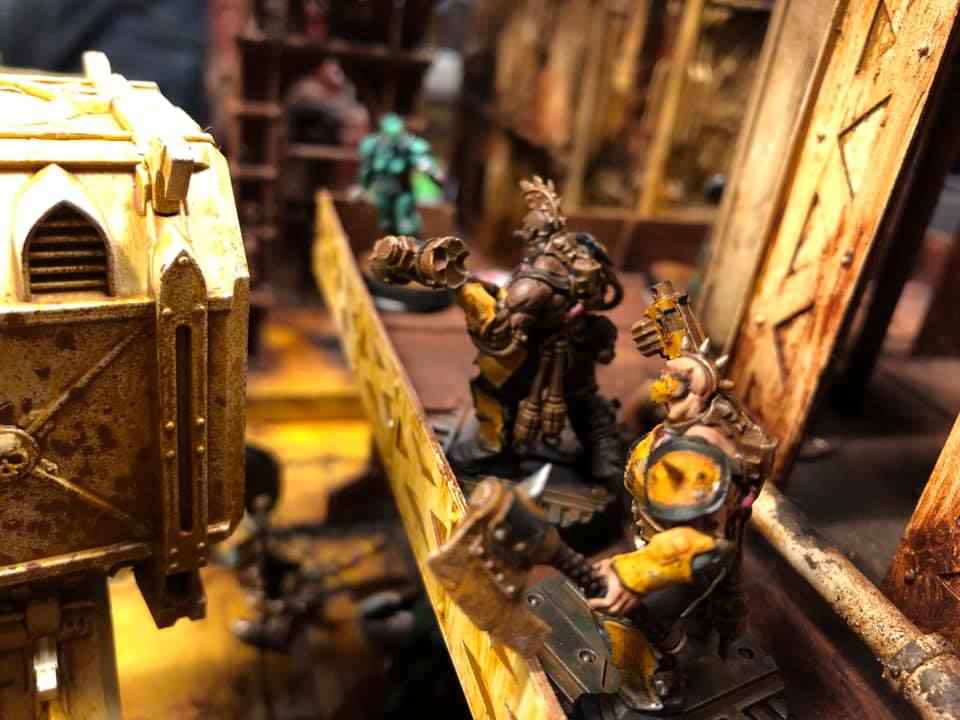 Van Saar Gangs collapse like a house of cards to a Goliath charge (Credit: SRM) 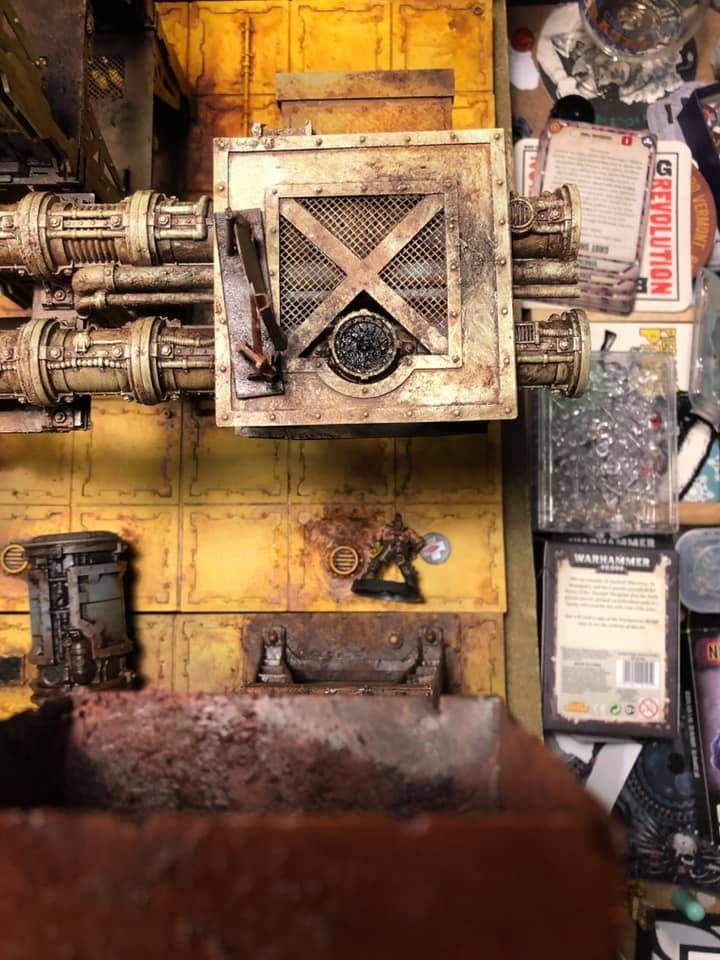 Goliaths are not known for agility skills (Credit: SRM)

Boltgun: Versatile, powerful, and readily available, a boltgun is a great weapon for any Goliath ganger. Goliaths want to be up close where its short range modifier really shines. The 6+ ammo roll stings, but by the time you run out you should be close enough to use a backup stub gun or bash some teeth in with your Strength 4 gangers. Rating: A+

Combat Shotgun: Combat shotguns are great at 70 credits and absolutely stellar at the 60 credits Goliaths pay for them. They can suppress or outright delete a group of fighters caught unawares with the shredder rounds, and solid slug can put the hurt on multi-wound models with ease. You want to be up close for bashin’ anyway so take two, every time. Rating: A+

Shotgun: “Shotgun” that isn’t preceded by “Combat” can get right out of my gang. It’s a versatile and cheap weapon, but if you can afford a combat shotgun you should generally go with that instead. Rating: C+

Stub Cannon: Goliaths don’t get lasguns or autoguns, but they do get these giant revolvers. Strength 5 and knockback make them pretty good at knocking other Goliaths off of gantries and into pits, but the lack of AP and any sort of hit modifiers make these pretty junky. They’re cheap, at least. Rating: C- 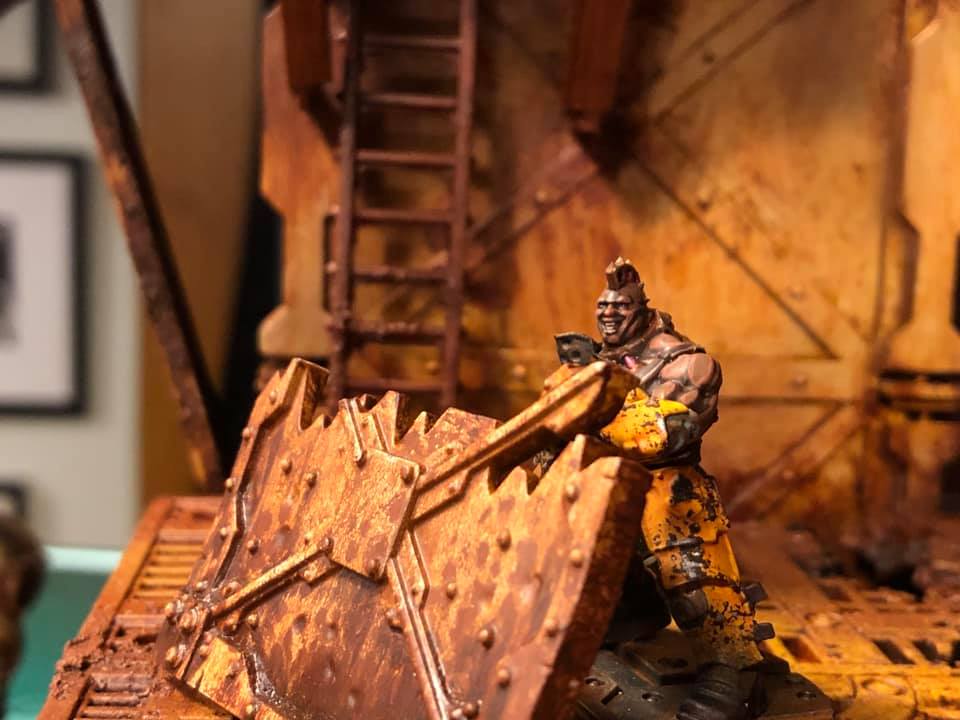 MFW I find out boltguns are available at gang creation (Credit: SRM)

Axe: Disarm is one of those “oh yeah that does a thing” abilities in Necromunda, and on a 10 point weapon that gives a strength bonus, that’s a nice surprise. Great choice for a juve or ganger you want to keep cheap. Rating: B

Brute Cleaver: The sharper cousin to the Axe that loses the strength bonus, and gains AP -1. If it was the same price I’d say it’s a toss-up, but at twice the cost it’s situational at best. Rating: C-

Chainsword: Low cost, a bonus to hit, parry, AP-1, and the opportunity to occasionally pop off some bonus damage on a 6+ make this a good weapon. Goliath base Strength 4 makes this a great weapon. Rating: A

Fighting Knife: Goliaths aren’t getting behind anybody for that backstab. The AP-1 is cute but this ain’t getting used anywhere. Rating: F

Maul: To my knowledge this is the only weapon that gives a positive modifier to your opponent’s save with its AP +1. For that reason alone, don’t take this. Rating: F

Power Axe: Will cleave through damn near anything, and only one handed to boot. Power weapons are fairly rare in Necromunda, so being able to load one of these up on your leader from the start is pretty cool. Rating: A-

Power Hammer: A slightly pricier alternative to the above that’s worse in most ways, but has Damage 2, giving it its own niche. Rating: B

‘Renderizer’ Serrated Axe: This weapon is overkill in just about every situation. Strength +2, Damage 2, Pulverize, and a cheeky -1 AP mean that this is going to stay effective long through a campaign. Rating: A+

Spud-Jacker: The +1 Strength and knockback abilities are nice, and it’s not too pricey as far as melee weapons go. It also jacks spuds, which I’m sure is worth something. Rating: B-

Two-Handed Axe: A poor ham’s version of a renderizer. Worse in most ways before its -1 to hit modifier, making it a firm “avoid” choice. Rating: D-

Two-Handed Hammer: Damage 3 is generally going to be overkill, and the -1 to hit means you’re going to be hitting on 3+ at the absolute best. A renderizer is 5 credits more and better in every way that matters. Rating: F

Combi-Pistol (stub gun/plasma pistol): A weird one for sure, and one that will always run out of ammo. However, it’s accurate, hard hitting, and paired with a Stub Gun, making it a great choice on a leader with a power axe or hammer. Rating: A

Bolt Pistol: A good alternative to the combi-pistol above, and one you should have an easier time converting if you need it. The ammo roll is again the weak point here, but it’s a mini Boltgun which is always appreciated. Rating: A

Hand Flamer: Combat shotguns do the flame template thing better for cheaper. In Dan’s previous article about House Orlock, he laid out the house rule that lets them be used in melee though, and I’ll copy his homework here and regurgitate his scores while I’m at it: Rating: D in standard play, B+ with the house rule.

Stub Gun: Reliable, cheap, and worth it for the bonus die in melee alone. You’ll want it on your bolter guys for sure. Rating: B+

Heavy Bolter: Become the envy/target/pariah of your gaming group by putting this stupidly effective gun on a leader. With its high rate of fire and respectable damage and AP values, it will stay useful even late in a campaign. It will run out of ammo every game though, so bring a backup. Rating: A+

Heavy Flamer: Even in the hands of a Goliath gang, you’ll never get to use this garbo gun. Combat shotguns do what these are supposed to do for cheaper. Rating: F-

Heavy Stubber: Objectively, on its own, its okay. At just 30 credits less than a heavy bolter though, you’re never going to take this. Rating: D

‘Krumper’ Rivet Cannon: This gun has seen a rise and fall with changes in rulings to Bulging Biceps, Suspensors, and so on, but now it’s not Unwieldy so you can actually use it! You’ll almost never get into its 3” short range for the hit modifier, but it can cause Blaze which is always hilarious, and it’s fairly versatile for how short ranged it is. It’s a fun but probably only okay choice. Rating: C 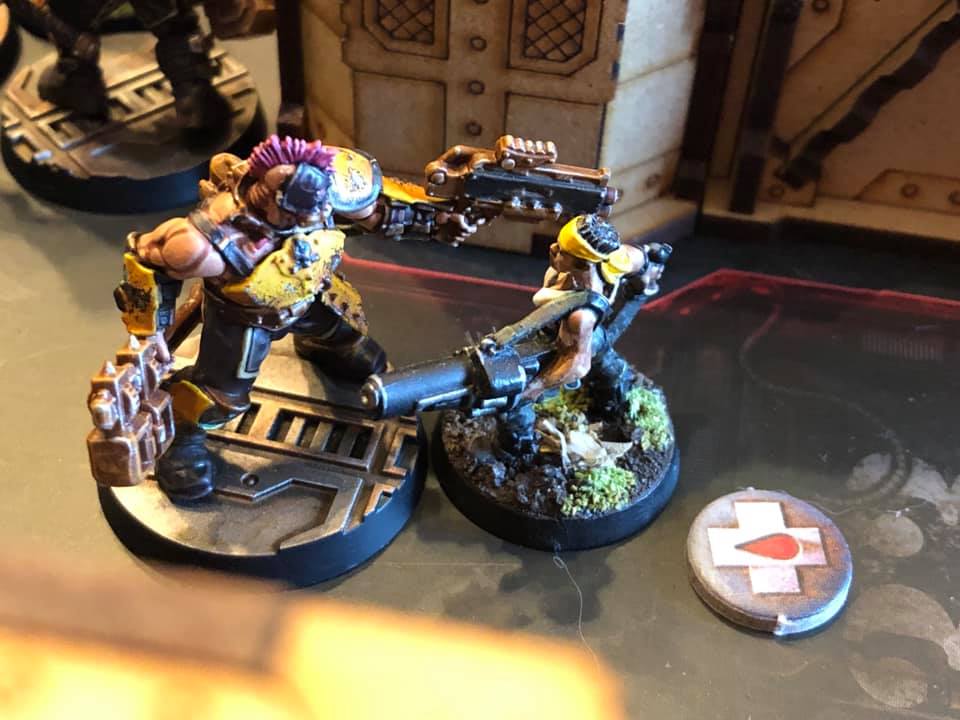 Even your shooty Goliaths are adept at cracking skulls (Credit: SRM)

Combi-Weapon (Bolter/Flamer): At 175 credits, this thing could kill The Emperor and I still wouldn’t take it. Rating: F

Flamer: You already have Combat Shotguns that pretty much do the same thing and then some. Blaze is hilarious though, and that’s worth something. Rating: C

Grenade Launcher: One of the few pieces of affordable longer-ranged wargear available to a starting gang, the Grenade Launcher has a place in every list. Pinning groups of enemy gangers, punking champions with Krak Grenades, and eventually popping smoke to cover your advances makes a Grenade Launcher a reliable and versatile pick in every gang. Rating: A

Meltagun: Whatever you hit with this thing is all but guaranteed to become a distant memory, but it’s extremely expensive and doesn’t have the range to come into its own. Rating: C-


Stimm-Slug Stash: There comes a time every game when the perfect target is ripe for smashin’, except they’re just out of charge range, or too tough, or they’re nasty enough to be scary in retaliation. Stimm-Slugs even the odds by rigging the game in your favor, shrugging off flesh wounds and boosting your Movement, Strength, and Toughness by 2 for the rest of the turn. Even with a once-per-game restriction and the chance of a self-inflicted injury, the amount of hurt you can dish out while juiced up on these things is worth the risk.

Smoke Grenades: Goliaths aren’t the greatest at shooting. Goliaths also hate getting shot. Blocking line of sight as you stomp across the field is the perfect solution, especially since with Strength 4 you’ll be able to lob your grenades a full 12″ awaye!

Suspensor: A high-priority buy at the Trading Post once you’ve invested in an unwieldy firearm, with one of these babies your champions can reclaim their ponderous 4″ movement and fearlessly waddle into the fray.

Suspensor Harness: Kinda like a Suspensor, but for unwieldy close-combat weapons. Granting a fourth weapon slot, with this and the oft-maligned Bulging Biceps skill you could totally buy a second Renderizer and swing with both of them simultaneously in melee. This investment would buy you, ah, one extra attack. 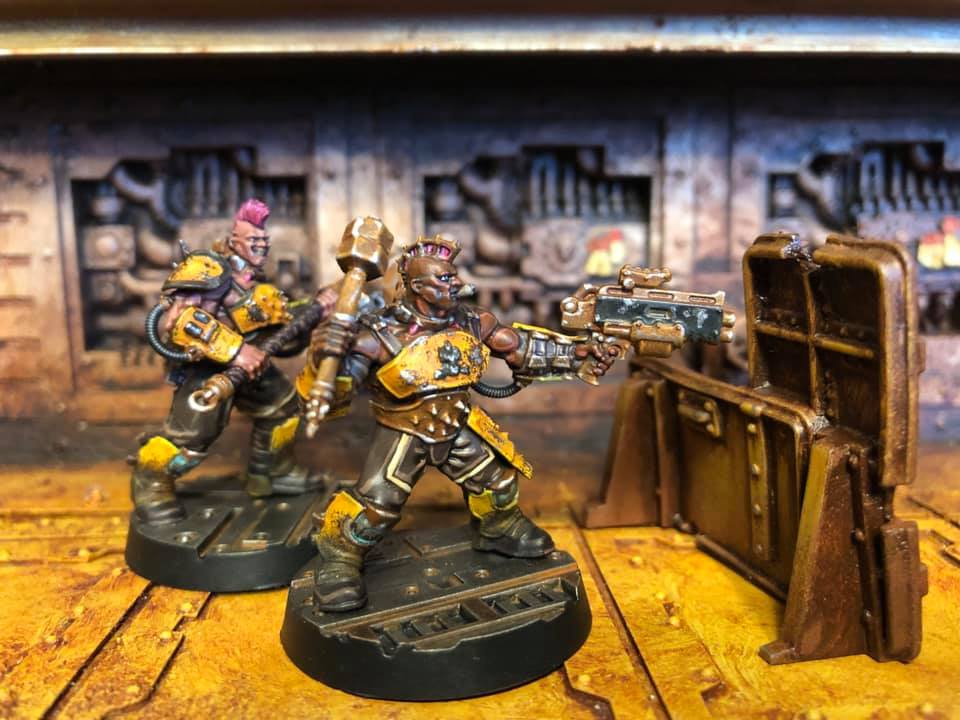 Goliaths stick together to make the most of their group activations (Credit: SRM)


We’re not even scratching the surface with the many nasty tricks up the Goliath sleeve here (or tucked into their armor, rather, since they don’t wear shirts). Check out these and more at our previous run-down of all tactics cards for all gangs.

Sumpkroc: This cute little fella can protect its owner by counter charging and making an immediate attack action against whoever charged them. This might not seem all that useful as it’s a defensive ability and Goliaths are usually on the attack, but on a shooty leader this could be extremely handy.

Goliath ‘Zerker:  When you thought Goliaths weren’t beefy enough, here’s one that has become more beef than man. Furnace Plates and a Stimm-Slug Stash are just about mandatory on this large lad, and Mutated Fists & Bone Spurs help him hit even harder while adding the only instance of actual Versatile to the Goliath gang. He also has a Combat Drug Stash, which can make him attack even more, when it doesn’t send him on a bad trip and crater his attacks characteristic. The problem is, without Nerves of Steel, ol’ Mungo Meatfist is gonna get knocked down and left in the breeze, making him a questionable choice. Goliaths already do everything he does, so he doesn’t really fill any gaps that needed filling. 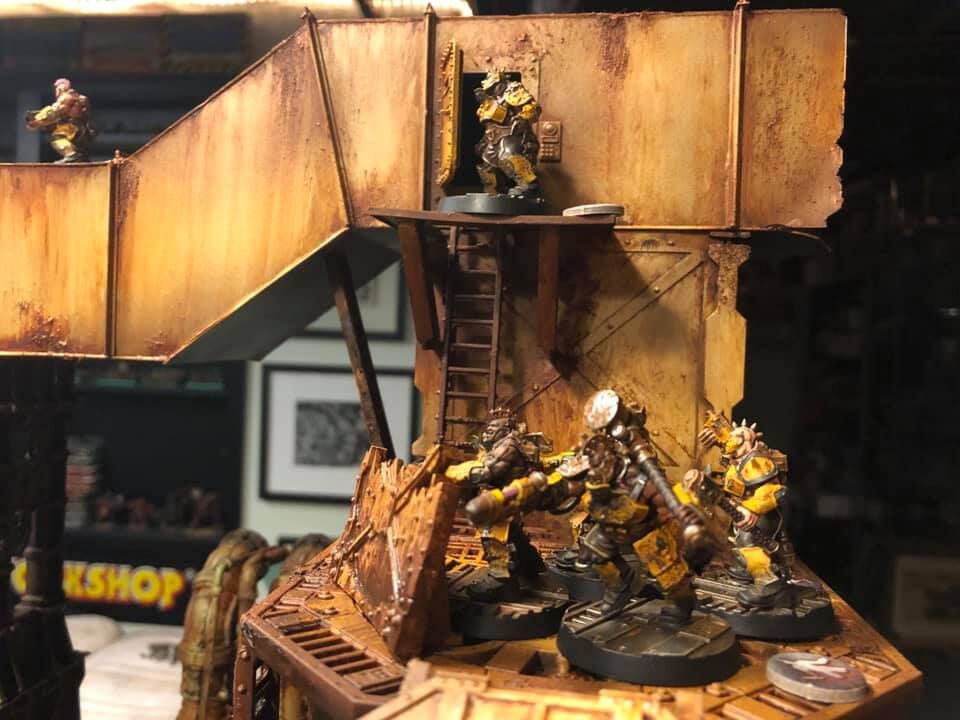 Big Chungus and the Chungaboys 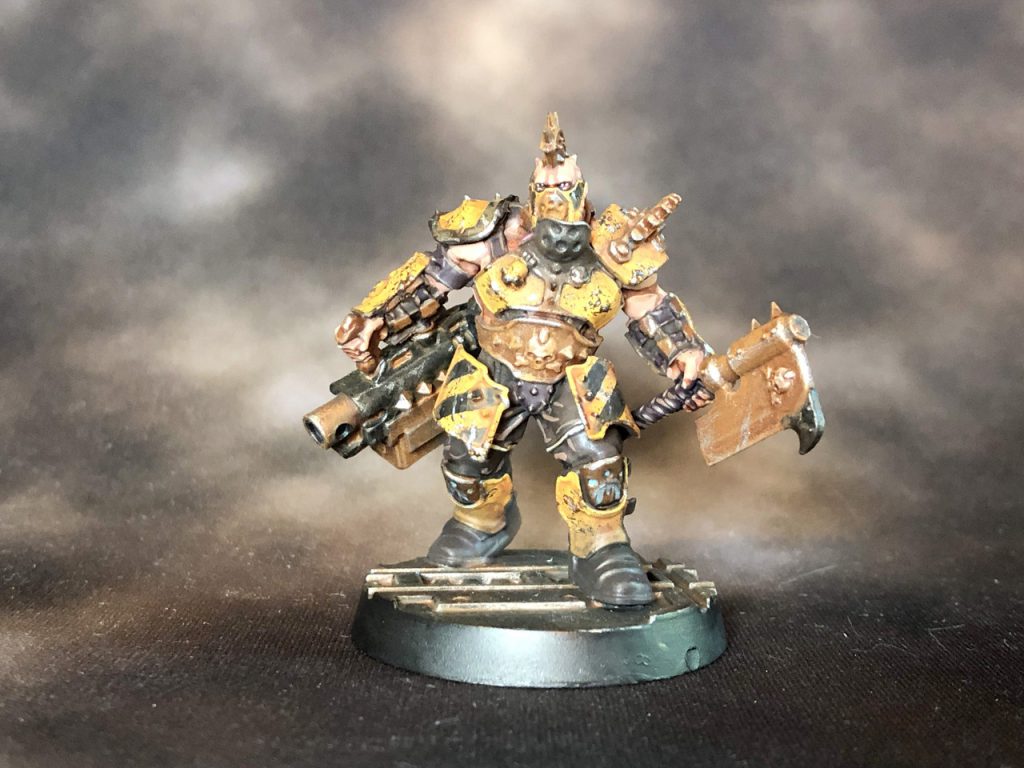 Goliaths are going to often be out-numbered, but almost never out-muscled. You’ll want to focus on closing with your opponents with creative use of cover and smoke grenades, then beating the daylights out of them. As campaigns go on, you’ll want to pick up stimm-slug stashes for your heavy hitters, as shrugging off flesh wounds and getting a bunch more attacks is always a plus. Tricksy gangs like Delaque will give you trouble, and Van Saar can shoot you off the table if you can’t close with them. However, once you hit an opposing gang they’ll be crushed beneath your Goliath’s size 18 boots.

That was a hoot! A thousand thanks again to Campbell (SRM) for taking a few minutes away from THE 40K BADCAST (co-hosted by Dan, the inexorable human hype machine), to fill us in on the nuances of his nasty muscle friends. If you have something you want to share with us, feel free to drop a comment for us below or email us at contact@goonhammer.com!