Although we love Warhammer 40,000, the game’s complexity can be daunting, particularly for newer players. In Ruleshammer, we look at the nuances of the game’s rules and how they affect gameplay, clearing up potential issues and helping make sense of some of the game’s less common interactions. In today’s Ruleshammer, Rob “Vre’kais” Chilton covers awkward wording around the word “wound” and how these stages interact with Bodyguards and Ignore Wound abilities.

What’s the difference between “to Wound,” “is Wounded” and “lost a wound?”

This piece is probably going over well known stuff for any players with a few games in, but for a new player this is perhaps the second most confusing wording after GW’s use of the word “within”. So I’m going to cover how there are several almost hidden stages to wounding your opponent, as well as a few different attack sequence quirks I haven’t covered yet. There will be flow charts, they won’t be like the fight phase ones, they’ll far tamer I promise.

Essentially these states take place one after the other. You roll to Wound, you allocate the successful roll to a model which “is wounded” and then for a 1 damage attack the model “loses a wound”.

I’ve not covered all the in’s and outs of saves here, but if you’re facing an attack with AP high enough to make a fail automatic, then it’s still a fail even if you don’t actually bother rolling the dice. If the attack does more than 1 damage, you actually “lose a wound” several times, not all at once.

What about Ignore Wounds abilities?

This is important because there are plenty of abilities that trigger at different points in this series of events. Perhaps the most common amongst these are “ignore wounds” abilities, plenty of players still refer to theses Feel No Pain (FNP) and you’ll often see them talked about as a “X+++”. These rules generally have wording like this;

Disgustingly Resilient: Each time a model with this ability loses a wound, roll a dice; on a 5+, the model does not lose that wound.

and that causes them to trigger each time a wound is lost. Note as well that this ability is just triggered by losing a wound, there’s no mention of the cause such as “as a result of attack”. So this ability works all the time, it lets you ignore wounds lost against: psychic powers, other “none attack” abilities like bombs, or vehicles exploding.

Where do Body Guard units come into this, how can they differ?

Command Squad Bodyguard: When a friendly <CHAPTER> CHARACTER model within 3″ of this unit would lose any wounds as a result of an attack made against that model, this unit can attempt to intercept that attack. Roll one D6; on a 2+ that model does not lose those wounds and this unit suffers 1 mortal wound for each of those wounds. Only one attempt can be made to intercept each attack.

So this ability steps in when a model is about to lose one or more wounds from an enemy attack (so just ranged or melee weapons, and not psychic powers, bombs, explosions, etc) this happens after the model has failed their save. It can only be more than one wound if the attack did more than one damage.

If your Space Marine Character was hit by a 3 Damage attack then the Company Veterans would take 3 mortal wounds, and lose 3 models as mortal wounds carry over unlike damage.

There are abilities that interrupt this process at earlier points, one such example is the Tau Drones Saviour Protocol ability.

Saviour Protocols: When resolving an attack made against a <SEPT> INFANTRY or <SEPT> BATTLESUIT unit whilst that unit is within 3″ of a friendly <SEPT> DRONES unit, if the wound roll is successful, you can roll one D6; on a 2+ that DRONES unit suffers 1 mortal wound and the attack sequence ends.

It gets even more complicated because one variant of the Tau Drone has a shield that allows it to ignore wounds it has lost on a roll of 5+. Also note that the Saviour Protocol ability reduces income damage to a single mortal wound so they only need to roll once.

Remember that this chart only covers using the Shield Drone to intercept attacks! If shot at directly then Shield Drones take damage as normal, they don’t convert it to a mortal wound and we need to make multiple 5+ rolls to ignore wounds against multi-damage attacks, like Disgustingly Resilient does above. Strategically, knowing when it’s best to shoot at the drones first or not is beyond Rules-hammer but Hammer of Math has gone over the maths of it.

So we’ve covered another confusing section of the rules, especially for new players. Personally I’d prefer some wording distinction between these steps maybe: “to wound, takes damage, loses a Hit Point” would be clearer. Below I’ve summarised an example covering most of the abilities discussed above, can’t have all of these article be all flow charts! 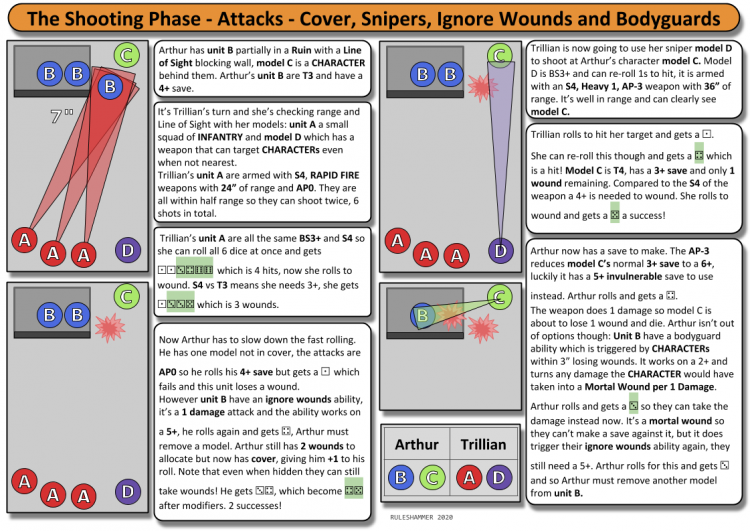 I really hope that has helped to clear up the confusing over use of the word “wound” and to identify where these abilities trigger. As ever If you want your rules debate answered you can submit questions both on reddit, or via this form. Or drop us a note in the comments below or email us at contact@goonhammer.com.