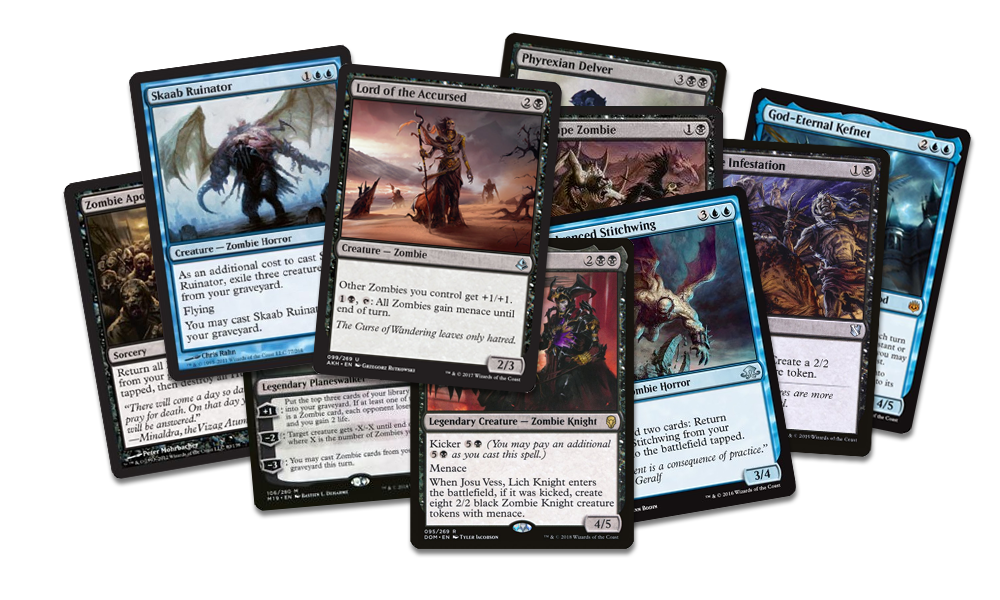 Halloween is past us but that doesn’t mean we can’t still talk about the walking dead. So it’s time to raise some moldering old corpses from the grave with a Zombie tribal deck! Are you picturing a sweet mono black recursion deck helmed by Geth, Lord of the Vault or Mikaeus, the Unhallowed? Not even close. Think more colorful and older. Ahhhh, so a classic Grimgrin, Corpse-Born or Jarad, Golgari Lich Lord, sweet. You’re still a color short. Ohhhh, you threw me a little with the old thing. So are we talking about Thraximundar? If you’re going 3 color I’d kind of like to see Varina, Lich Queen because Esper Zombies is a neat concept and she’s very powerful but she’s not old so it has to be Thrax, right?  Well, you got the Grixis part right at least. No my friend, we’re going old, old, incredibly old school, to the time of the reserved list and “Summon Legend” type lines to bring forth Lord of Tresserhorn! 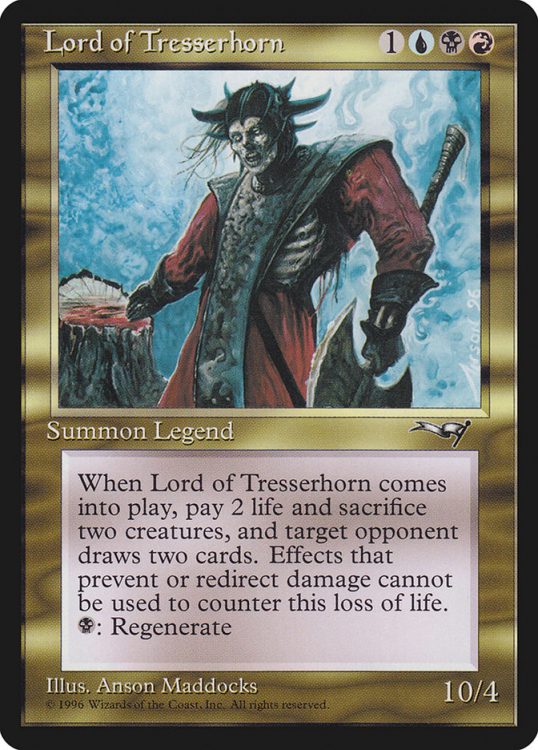 Long ago, a 10-power creature for 4 mana required not one, not two, but THREE downsides. We lose two life? That’s nothing, we’re playing with 40 life now folks. An opponent draws two cards? Well that’s not ideal but uhhhhh hey, we can use it as a political tool, so really it’s a hidden upside, right? We have to sacrifice two creatures when our Commander enters the battlefield, meaning if we don’t already have two on board we just sacrifice our own general? Yeahhhhhh, look, the whole point is to be an extremely flavorful tribal deck, I got nothing.

With that in mind, how can we deal with the downsides and get our general in play and eating brains as fast as possible? Without creatures on board we can’t even effectively cast him, so the first priority is getting cheap sacrifice fodder in play. There are 25 creatures that are 3 CMC or under in the deck to ensure we can cast them early and then play our commander on turn 4. Our best options for this are creatures like Lazotep Reaver and Gleaming Overseer who bring two bodies on a single card. Undead Augur and Midnight Reaper draw us cards when we sacrifice our creatures to the Lord, and with a deck this heavy on flavor and light on cards you would usually play because they’re good, you need all the card draw you can find. The other option available to us is to sneak our way around the ETB trigger by either playing Torpor Orb which not only lets us get our commander in to play easily but also has the upside of hampering an absolute ton of decks that lean on creatures with ETB effects, or using Sundial of the Infinite to end our turn with the Lord’s trigger on the stack.

Once the Lord is in play, we want to protect him from removal and give him haste with commander staples Lightning Greaves and Swiftfoot Boots and get the beats started. If we’re extremely lucky we can flash in an Embercleave for a one hit knockout! We have a number of options to give him evasion, from giving menace with Lord of the Accursed, swampwalk with Zombie Master, or straight unblockable with Rogue’s Passage. Alternatively, we can go wide with Ghoulcaller Gisa and use Dragon Throne of Tarkir to give our army +10/+10 and trample. It’s objectively worse than Coat of Arms, but a Lord deserves a proper throne!

The deck has a number of pump effects to get our commander to a 2 hit kill (commonly called ‘Lords’ but that’s just confusing given our commander) including Cemetary Reaper and Lord of the Undead, a few good utility cards like Stronghold Assassin for removal and Withered Wretch for graveyard hate, and bad but fun cards like Liliana’s Mastery and Rooftop Storm.

Finally, we have a range of reanimation and graveyard synergies for when the game goes long. We can start filling our graveyard early with Stitcher’s Supplier and Gisa and Geralf. In the mid game we have a few thematic wrath effects, including the odd choice of Damnation. Normally we wouldn’t include this as it prevents us from regenerating our commander, but we’re making sure to use SPECIFICALLY the Player Rewards art. Later Altar of Dementia lets us fill the yard in big chunks to power up Living Death, Rise of the Dark Realms, and Zombie Apocalypse into game ending bombs.

As a closing side note, this deck is uhhhhh, not exactly the most competitive. Any of the commanders mentioned in the intro would be upgrades for the deck, and none of them let your opponents blow you out with literally any piece of removal for one of the creatures you were planning on sacrificing to Lord of Tresserhorn. If you do decide to build around him, there are also a number of tweaks that can be made to make the deck more functional and less tribal focused. The deck could utilize red better with haste enablers like Fervor, double strike effects such as Temur Battle Rage, and even take advantage of looting effects like Faithless Looting in order to both get more draw effects and fuel the graveyard. Blue gives unblockability with cards like Slip Through Space, card advantage engines like Rhystic Study, and protection in the form of good old Counterspell. There are even other useful artifacts like Whispersilk Cloak for a deck that really, really wants to connect with its commander. All that being said, if your playgroup is big on beer and pretzels type games where other tribes and similarly powered decks make frequent appearances, this build is a ton of fun.