If you thought GW was done with Adeptus Titanicus, think again: Tuesday morning, with basically no warning whatsoever, the AT design team dropped a new FAQ document on us. Here’s what’s in it:

Most of the changes from the last version of this document are updates to the various supplement books to make the Traitor rules contained in them match the rules in the Traitor Legios supplement. The only surprise here is that it took this long for us to get this document – the equivalent errata sheet for Loyalist Legios was a day-0 release. In any event, if you’re a Traitor player and for some reason still haven’t bought Traitor Legios, now you’ve got the rules for your chosen legion available and updated.

That’s not all, though: there are a couple of small but meaningful changes to the actual rules of the game contained here as well. First up, the Blast trait now has rules for what happens if a Warbringer fires its carapace-mounted quake cannon at something closer than 9”, and it’s exactly what we expected: the attack misses, and it scatters from the minimum range. This rule will also impact the Dire Wolf’s volcano cannon, though only coming into effect at 6” minimum range.

Next, the Ferrox light maniple’s Knife Fighters trait has been clarified: the range of the ability is determined by the attacking Titan, not the target. This means your Warhounds need to get within 6” of their target to make use of this maniple ability, regardless of how big the target is. It also serves as a wicked buff to forces that can swap a Warlord into this maniple. Legio Fortidus Brawler Warlords are better than ever with this trick. 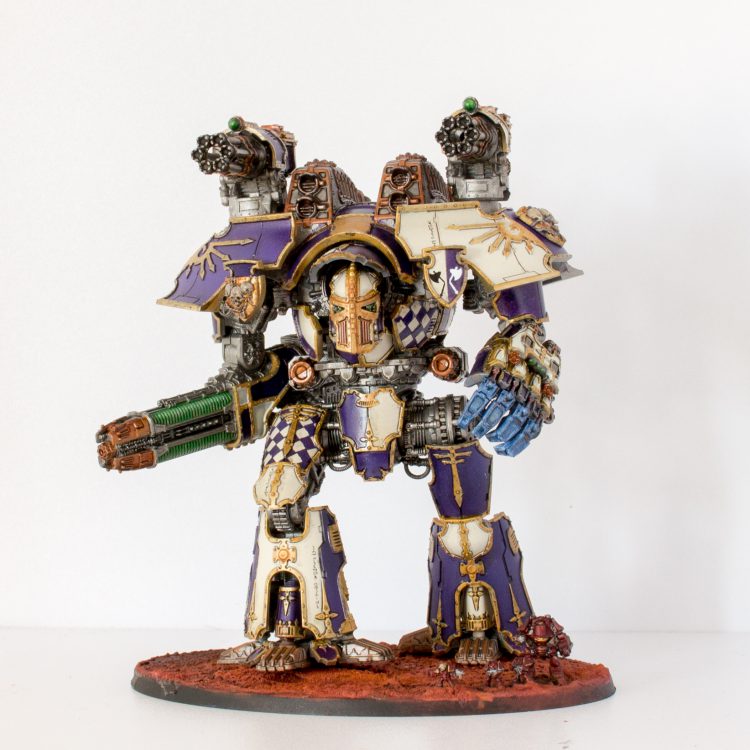 Third, we’ve got a ruling on what stratagems you can use in a Loyalist or Traitor force. If a stratagem is included in that supplement, you use the wording from that book. If it’s not, you can still use it so long as it’s available to all legions or to a legion of your chosen allegiance. This last bit is mostly relevant for the White Dwarf stratagems that come out occasionally – if you want to bring a Titan with a Venerable Machine Spirit, this makes clear that you still can even though it doesn’t appear in either allegiance’s supplement.

Other than that, there are meaningful changes to two more things: the Loyalist Vortex Payload wargear upgrade, and the Reaver and Warhound volkite eradicators.

Vortex Payload gets reined in

Additionally, there are two changes to the Loyalists’ Vortex Payload upgrade: first, Vortex is now less overwhelmingly powerful but more consistent, dropping the number of automatic hits from d6 to d3+1. This is a great change, leaving you with a weapon upgrade that is always powerful but significantly less likely to result in a round 1 engine kill just for showing up in your list.

The other change is that you now only get one Vortex Payload upgrade per maniple in your force. Interestingly, the only thing the rules care about is the number of upgrades and the number of maniples: if you bring a three-Reaver Corsair and a three-Warhound Lupercal, you’ll be able to take two vortex missiles.

Taken together, these two changes bring the power of Vortex Payload down a bit without completely neutering it. You’re no longer going to see entire Corsairs running around chucking these things downrange turn 1, and while it’s certainly still scary, dropping the number of hits to a more manageable number is a great fix.

Volkite weapons get a much-needed boost

The other major change here is the addition of the Beam (2) (Draining) trait to the volkite eradicator, which can be mounted on a Warhound’s arm or a Reaver’s carapace. Prior to this change, there wasn’t really a use-case for this weapon. Adding this in makes things a bit more interesting, though: combined with Voidbreaker (2), the Beam trait lets you guarantee 5 void saves against a target of your choice, or will allow you to put 3 strength 5 hits into the structure track of your choice without having to roll to hit.

All in all, these changes help create a bit of a niche for the volkite eradicator. It’s now roughly at parity with the vulcan megabolter as far as expected void saves go, but its new Beam trait allows you to put consistent fire into a damaged location that’s slightly more effective than the megabolter making called shots. This advantage only grows as you move further away from your target, since Beam will completely sidestep the -1 accuracy penalty at long range.

The weapon will still be a bit of a tough sell to more risk-averse players on a Warhound due to the scout Titan’s smaller reactor track, but we think it really has a chance to shine on a Reaver carapace at mid-range. On Warhounds, consider pairing it with a turbo-laser destructor for a skirmishing Titan that can harass the foe from longer range, then move into a flank to secure a kill with guaranteed hits to a heavily-damaged location. For a Reaver, consider matching it with the tried-and-true arms loadout of a gatling blaster and melta cannon. If you’ve got some volkite eradicators sitting somewhere in your pile of shame, it might finally be worth breaking them out and painting them.

There’s a lot of magenta text in this FAQ, but, if we’re honest, the majority of it was expected. What wasn’t such a sure bet was the changes to Vortex and the volkite eradicator, but they’re very welcome. Both changes do a great job of bringing the weapons into line with the rest of the options you’ll have available to you.