The Painter: RichyP
The Game: Age of Sigmar
Points: About 1500
The Faction: Hedonites of Slaanesh and some Beasts of Chaos
Collecting Since: Start of the Month (August 1st 2021)

Introducing the “Herdonites of Slaanesh”

I put out a poll on a Discord as to what I should paint over that upcoming weekend and Beasts won by 1 vote. Shockingly I don’t have any predominantly blue coloured armies so I set about coming up with a test scheme on a Gor to see if I could make them blue. This is what I came up with: 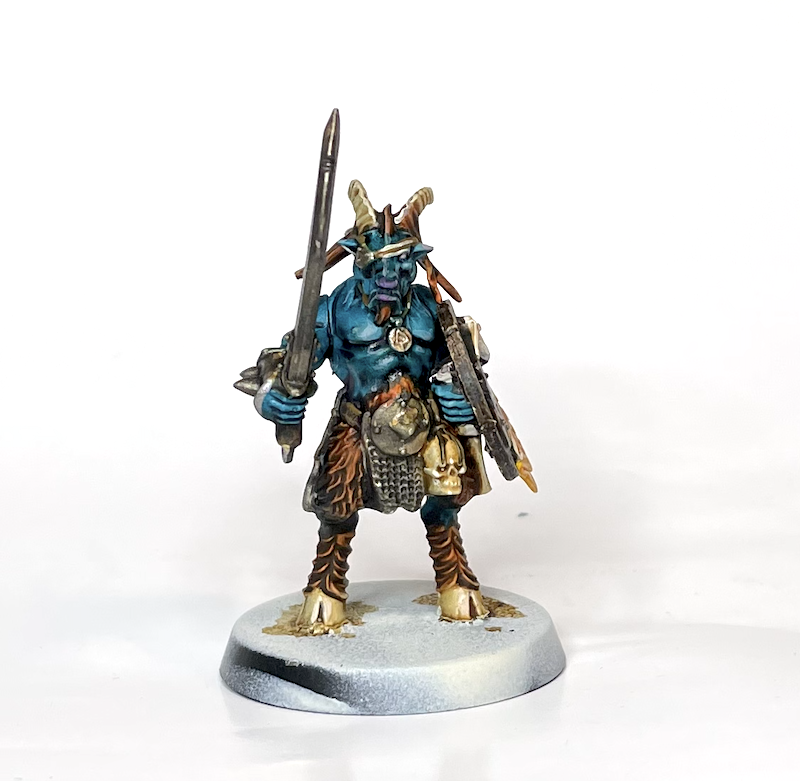 Orangey/Brown fur and Yellow fabric (it’s not very visible on this guy but it’s on the shield) complimented the blue skin quite nicely and I’d finally found a really easy way to paint Orangey Yellow (Yellow ink with a Fuegan Orange wash, thank me later). I didn’t just paint one Gor though I painted his friends too.

I also painted up some Ungors using the same scheme the next day, I bought the BoC Start Collecting box so I might as well, right?

The Orangey Yellow (henceforth just yellow) worked pretty well on the banner too after a drybrush of VGC Scrufulus Brown to tidy up the streaks of Fuegan orange. If it worked well on a larger area I wondered if it would work as the main colour but I didn’t want to change the colour scheme of the Gors so I decided to look for another Chaos model that had horns and lots of fabric. Introducing the “Herdspeaker”, or Shard Speaker as GW calls them: 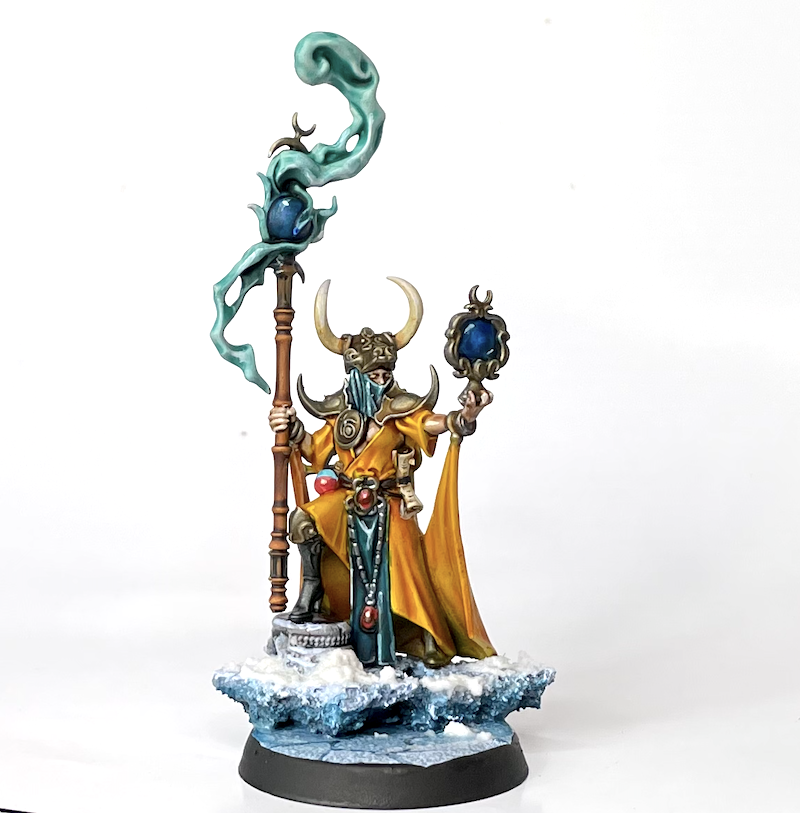 The day I was painting the Shardspeaker, the Beast Lord I ordered also arrived, which meant two primarily yellow characters to try the scheme out on: 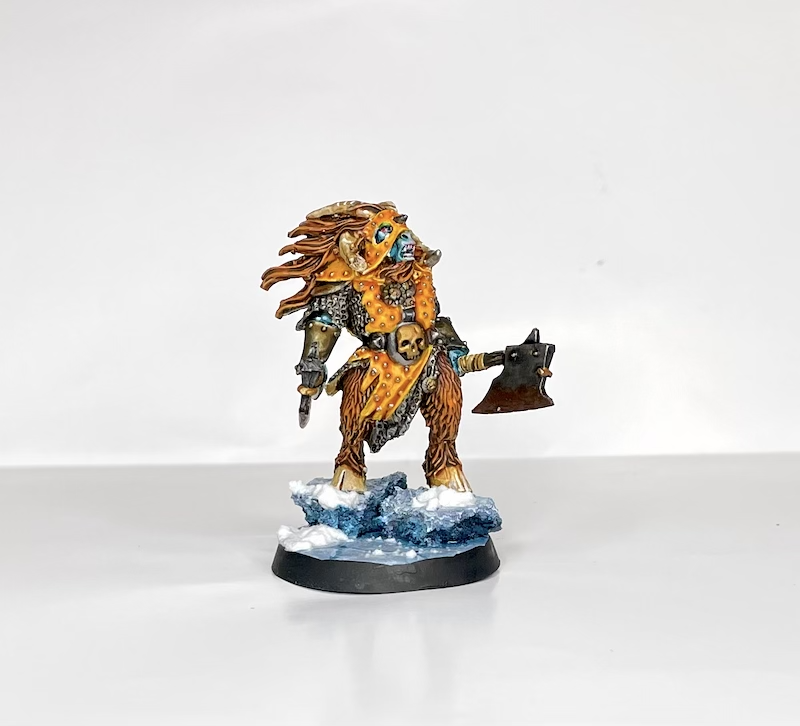 I was really happy with how they turned out and new that I’d want to be adding more Hedonites into the mix so I had a flick through the latest FAQ’s for Age of Sigmar to find out that you can take 1 unit of Beasts of Chaos for every 4 units in your Slaanesh army (so every 4th unit in other words, not 4 Slaanesh then 1 BoC as I initially read it). This meant flipping the army so it was Slaanesh with Beast of Chaos Coalition and not Beasts of Chaos with some Slaanesh units, which is fine except I bought and painted this before reading: 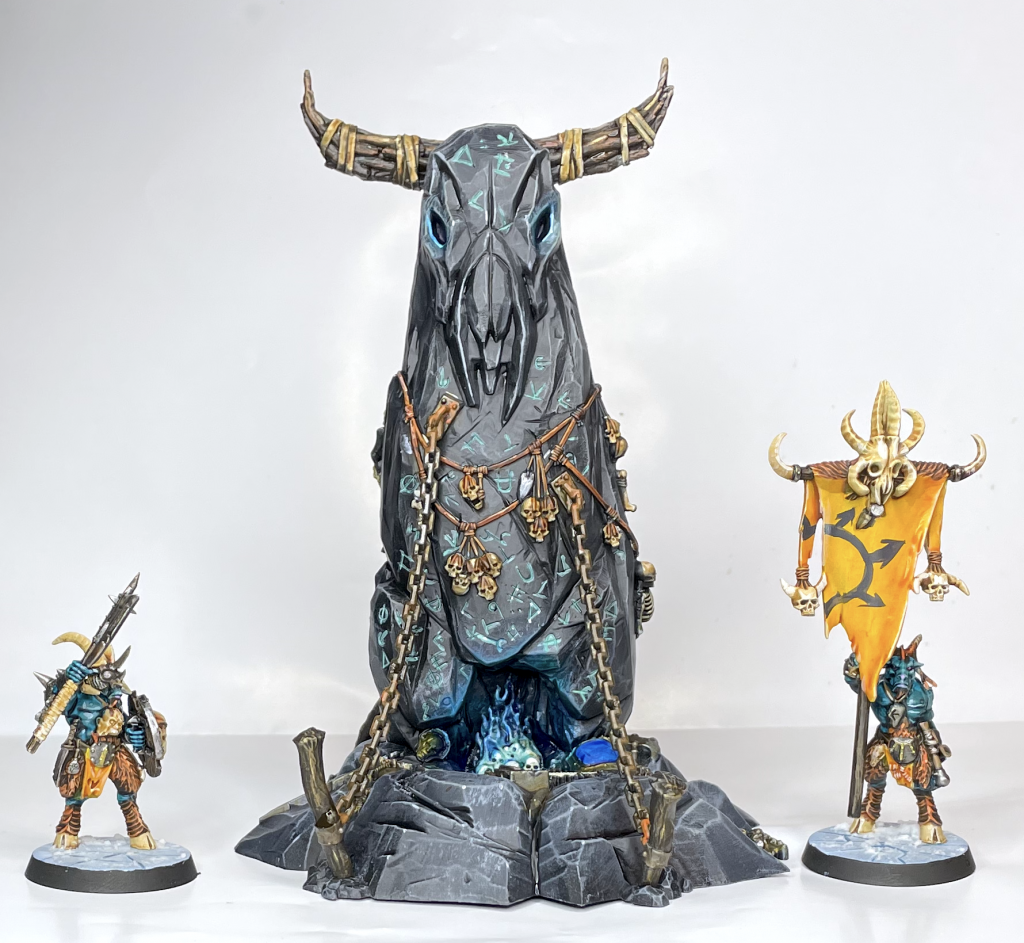 I bought a Herdstone and painted it before reading the rules, oh well it can at least be used as scenery or I could make a pure Beasts force in the future I guess.

After reading the coalition rules I found out you could give heroes access to artefacts from the parent allegiance, so I made another Beast Lord, this one using the Hedonite Godseekers “Lash of Despair” artefact: 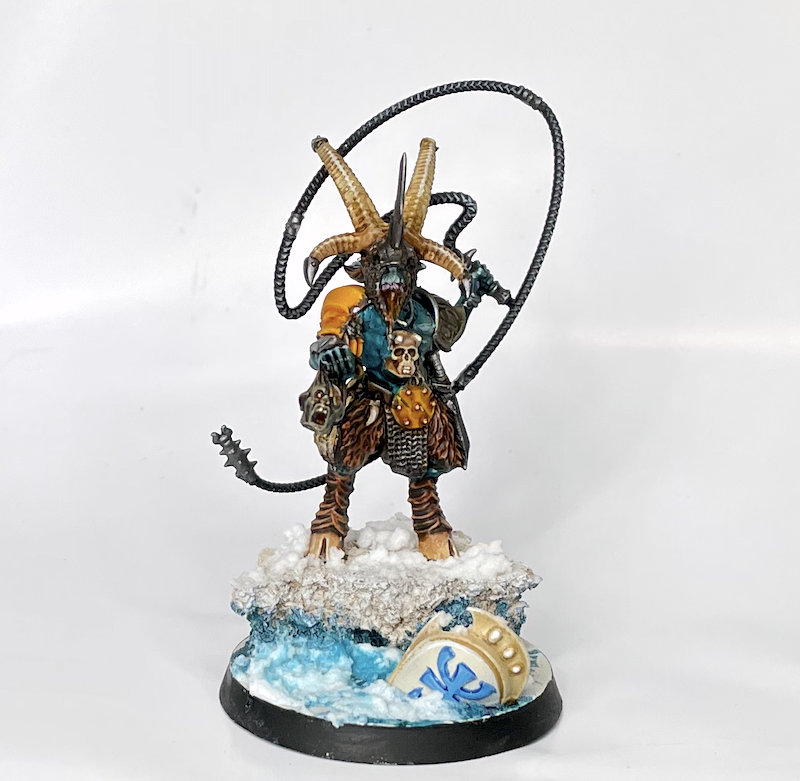 But where did the whip come from? Oh yeah, I bought the Start Collecting: Daemons of Slaanesh and Painbringers kits too, so I could add more bits to the mix. Using these kits, my next task was to find out how to introduce the Daemons into the mix without blowing the colour palette up even more. I started out with the Seekers and painted them in the Beasts of Chaos colours:

So far I’d kept the palette the same throughout: Mortal and Seeker Flesh, Gor and Seeker scales, Fur and cloth were consistent, but I wanted the Daemonettes to have that classic pale purple and while I’m not super happy with how they turned out I think they just about get away with it and I made their leather clothing the same Gor blue colour to key them in a bit: 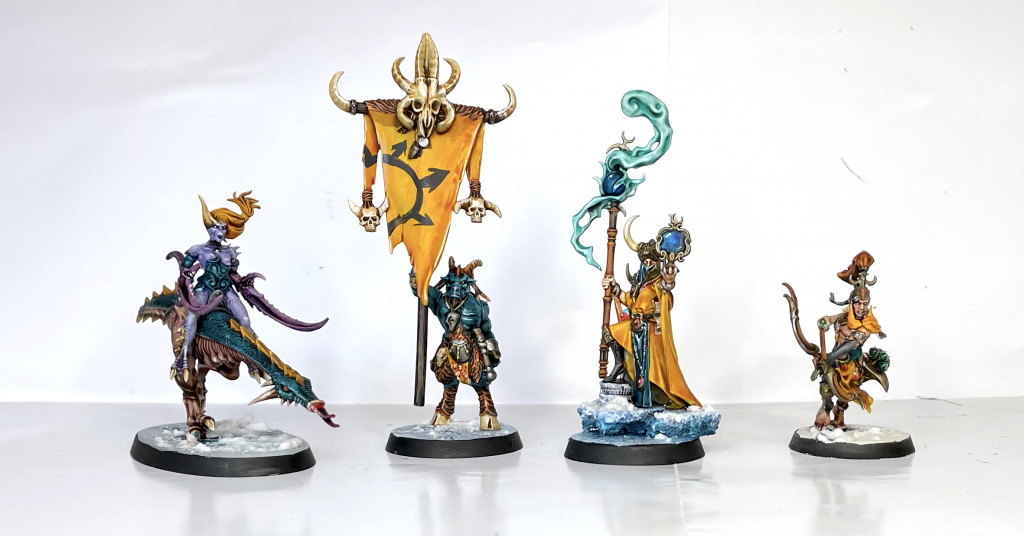 The model on the right? They’re one of the Blissbarb Archers from the Hedonites of Slaanesh faction and I painted those up too:

I made a couple of tiny changes to them by adding an Ungor head to the guy with with the poison pot, and a daemonette head and claw on one of them (because they’re spindly and I broke the original).

After switching to Hedonites as the primary they’re now my only Battleline unit as the Gors/Ungors don’t count towards Battleline in a coalition, turns out a Lord of Pain makes Painbringers into a Battleline unit, and fortunately I had the Dread Pageant in the Dire Chasm box I bought a while ago kicking around in my backlog: 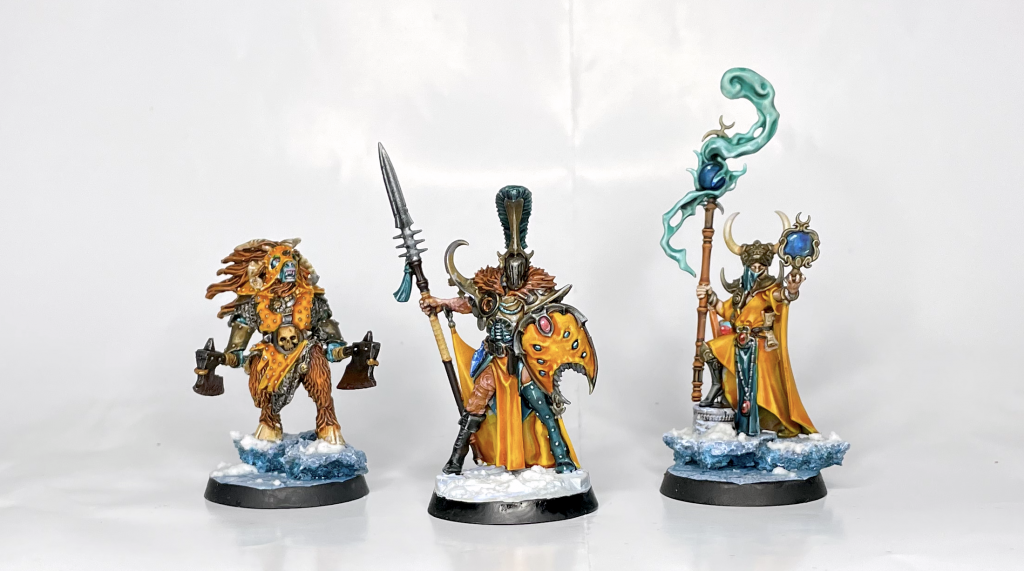 Now I can add the Painbringers right? Well yeah I can in a minute, but the thing about that kit is it has a few other spares that were begging to be used, namely the helmets and now thanks to not being able to use the Herdstone I wanted a centrepiece model that was keeping in with the theme of the rest of the army. Someone posted a picture of Yndrasta and she just screamed Slaanesh to me, so I got my hobby knife out and got to work on Slaandrasta / Sigvald / Daemon Prince? Whatever she will be this is what she looks like: 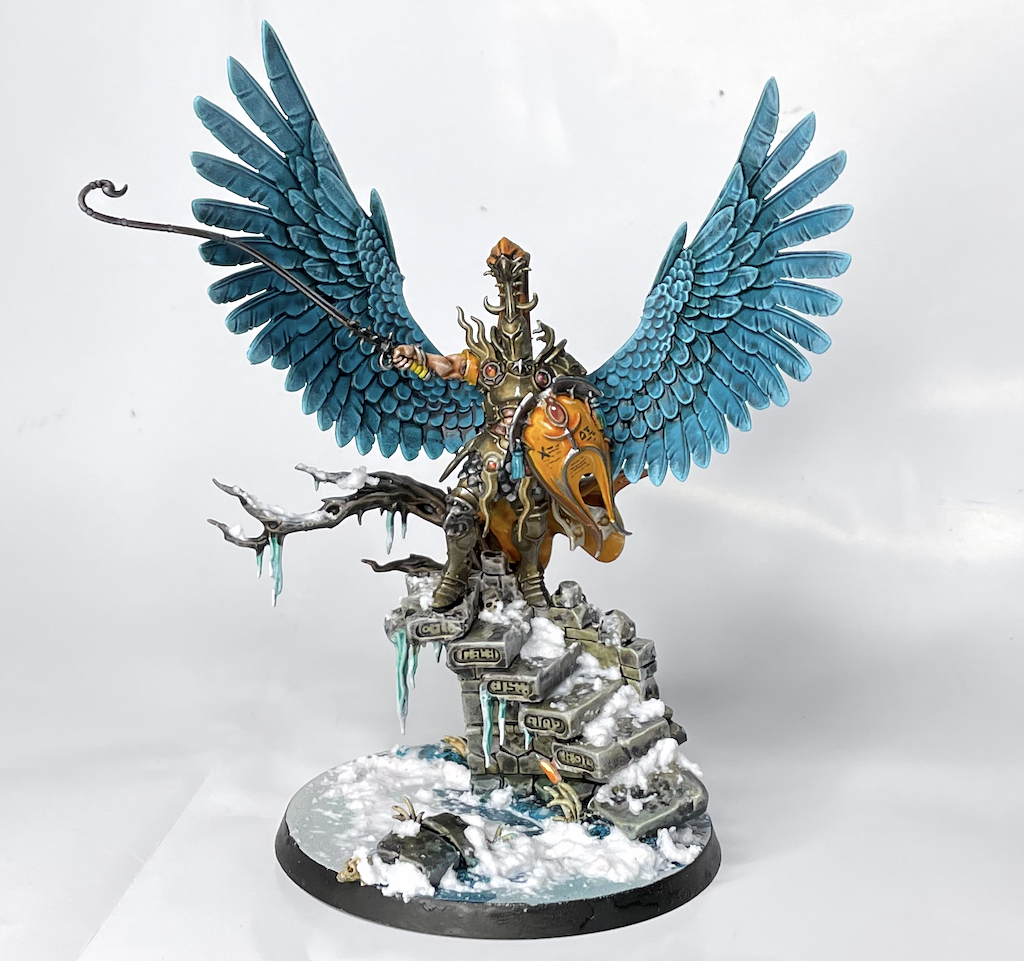 And finally the Painbringers to go with her: 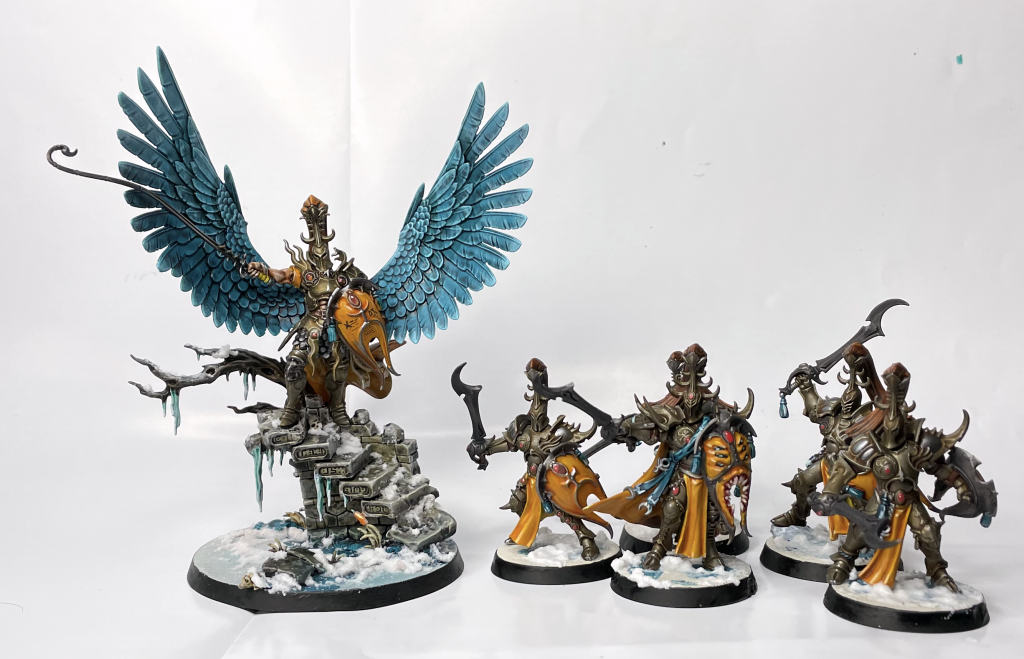 So he we are at the middle of August 2021 with about 1000pts of Hedonites and 500pts of Beasts of Chaos. I’ve got some more ideas about what to add to them next but in reality I’ll more than likely move onto something else for a bit and come back to these as an ongoing fun project, in the meantime here’s a parting family shot minus the Painbringers because I ran out of space: 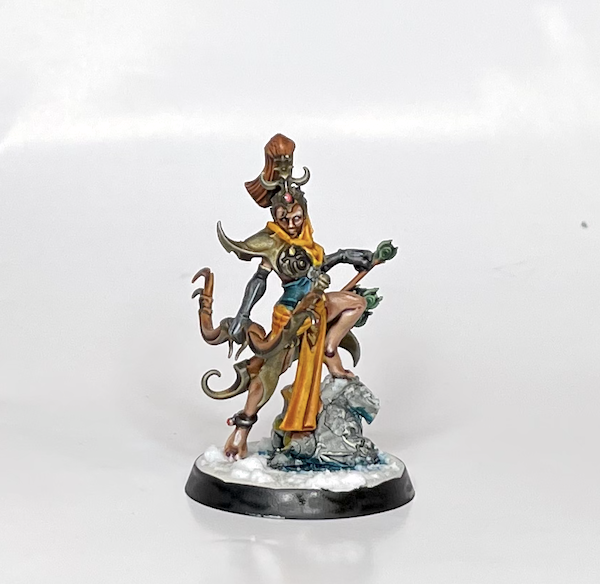