Welcome back to Catching Snowflakes, our series of tactics articles covering the less popular or prolific factions of Infinity. In this week’s article we’re talking about Spiral Corps.

Hello Goonhammer! I’m Micro, and I’m the resident long time Spiral Corps player in the Canberra meta, which I share with the likes of Thanqol, Musterkrux, and Robert Shepard.

So don’t worry, Musterkrux will be back writing about Infinity for Goonhammer soon enough. But first, this snowflake is mine.

Who are Spiral Corps?

Spiral Corps are a Mixed Mercenary Company that was saved from the brink of bankruptcy by Luubna Kaaran, a Tohaa woman with deep pockets and connections within the Human Sphere. She desired a path out of the Tohaa Trident Military after the Combined Army destroyed the Daedalus wormhole gate.* Since gaining its new owners, Spiral Corps has specialised in anti-Shasvastii operations and can be found throughout the human sphere, keeping things safe from Shasvastii incursion, for a price.

But really, Who are Spiral Corps?

** Tohaa’s equivalent to The Illuminati 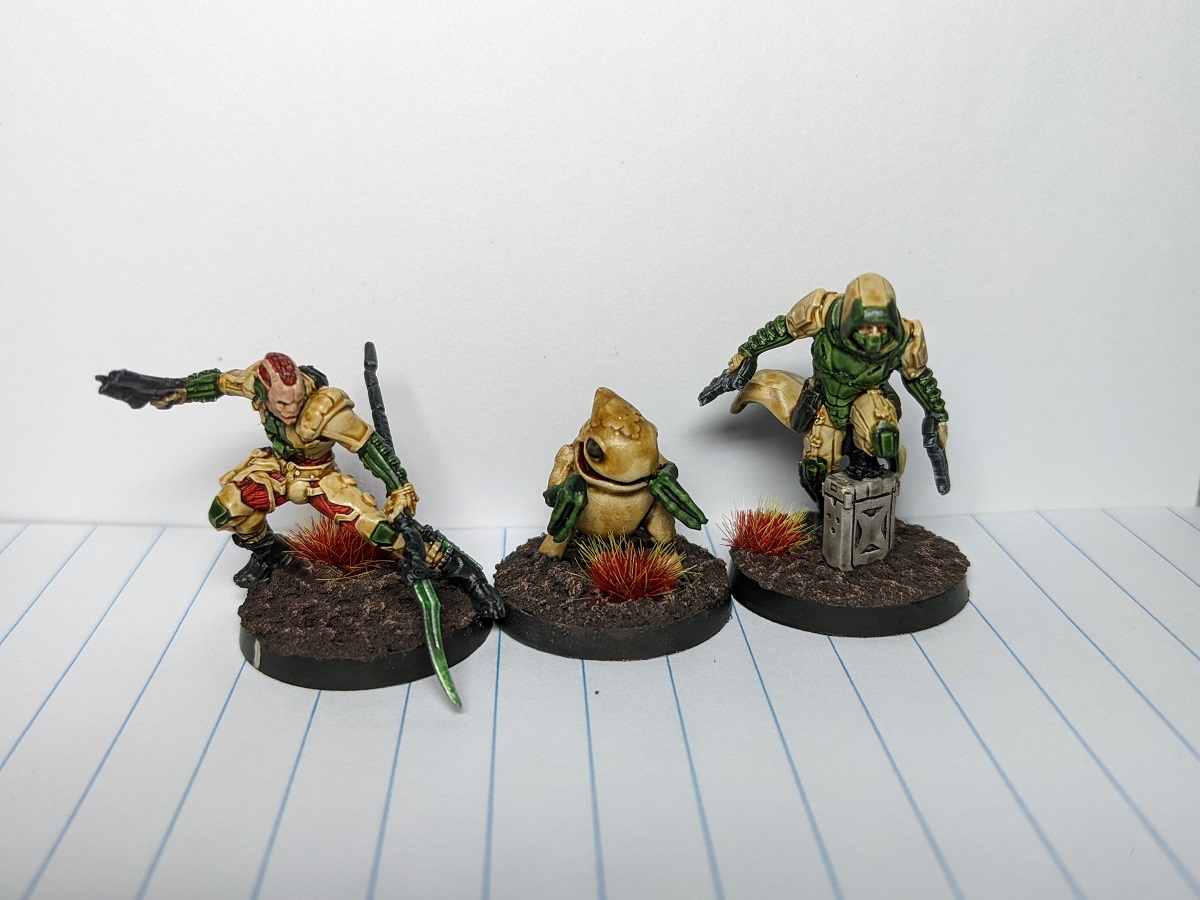 Spiral Corps are THE bullshit defensive sectorial in Infinity. If you’re doing it right your opponent should be off balance and unsure as to the best way to defeat you. This ties in nicely with how strong Spiral’s defensive game can be, particularly if you layer your defences and use your Helots wisely.

On Helots, make sure they only have line of sight within their good range band (typically 24 inches) and try not to reveal them unless your opponent declares a discover-shoot order. I typically bring 2 helots, as the level of terrain that I usually play with means that a 3rd helot can’t really deploy in a good place, and might as well be a regular Chaksa.

But that doesn’t mean that Spiral is weak on attack. Tricore allows one triad to punch well above its weight, and Spiral Corp’s impersonating troops are some of the best in the game. While a well piloted Jaan Staar can be an existential threat to your opponent, I’m quite fond of the Greif Operator myself. If you can identify your opponent’s lieutenant, there is nothing quite like reserve dropping a Greif nearby, and putting your opponent in loss of lieutenant on the first order of the game. And if the Greif doesn’t succeed on his WIP13 forward deployment roll, 20 points is not the biggest loss.

Spiral Corps can be very brittle. If your opponent plays into your strengths, you’ll feel indestructible. But if they manage to scalpel off a few key pieces (e.g. the tricore Taagma, or your Draal), Spiral can collapse like a house of cards. This brittleness can be exacerbated by the lack of big guns Spiral can bring. Spiral’s most powerful attack pieces lack in either high burst or high damage, (Neema Saatar with her Spitfire, the Draal with AP Marksman rifle and the Taagma Sniper) and none of them are perfect against everything you’ll face against. In particular, TAGs can be a real problem for Spiral Corps, as they are immune to many of Spiral’s tricks and can brute force their way through your defensive layers.

Specialist variety can be problematic for Spiral Corps as well. With only one forward observer option and poor hacking options, scenarios like Highly Classified and Countermeasures can be a real challenge.

How does Spiral Corps compare to Tohaa? 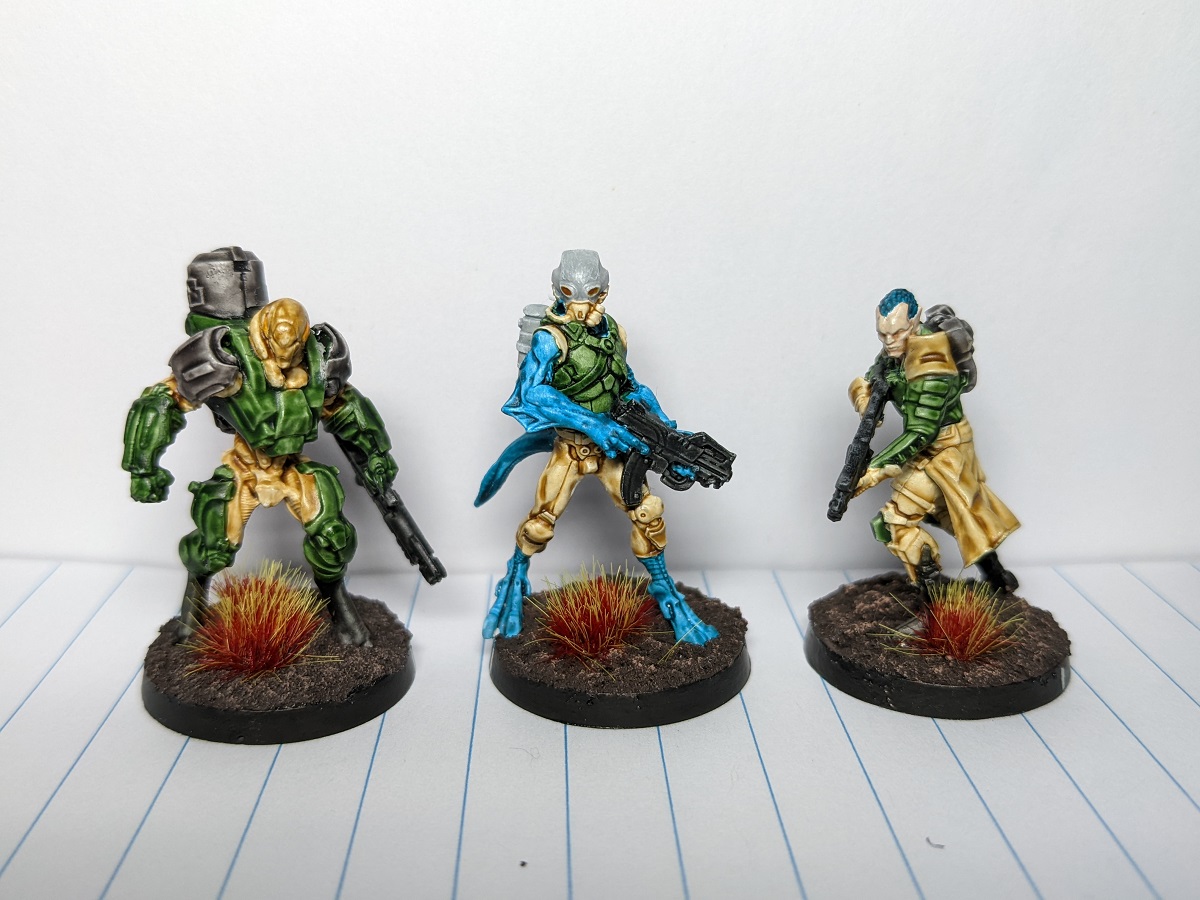 Well firstly, you can actually purchase Spiral’s whole range at your FLGS, which is a plus if you hate proxying like I do.

Broadly speaking Spiral are less durable than Tohaa (as there are fewer symbio-armoured troops), and don’t have access to Tohaa’s big guns like K1 snipers and HMGs. The loss of Makaul, both as triad fillers and as eclipse smoke really hurts. Additionally, as Tohaa is a vanilla faction they have access to cool toys such as the Libertos and the motorised bounty hunter.

What Spiral does have is an exceptional defensive game. Smoke Kriigel, holomask shenanigans and especially helots make Spiral a tough army to attack. Spiral’s smoke shooting is far more reliable and more lethal than Tohaa’s, and the addition of tricore makes Spiral’s primary attack pieces that much more deadly.

Spiral Corps has access to a unique special rule called Tricore . It exists on one profile in the game on the Taagma Schemer, and there can be a maximum of one tricore model in a given list. This lowly Taagma Schemer allows a three member triad it’s a part of gain the bonuses of being a 5 member core link. So while Spiral may lack the big guns of Tohaa, Spiral can be better at using the guns it has.

When writing your Spiral Corps lists, you need to have a plan for what your tricore should be during most of the game. However do keep in mind that you can reform your triads and tricore during the game to fit the situation. For example, a full stealth triad/tricore can be useful to sneak past a hacking network.

Nevertheless, there are three good general use tricore configurations that you should build your lists around: 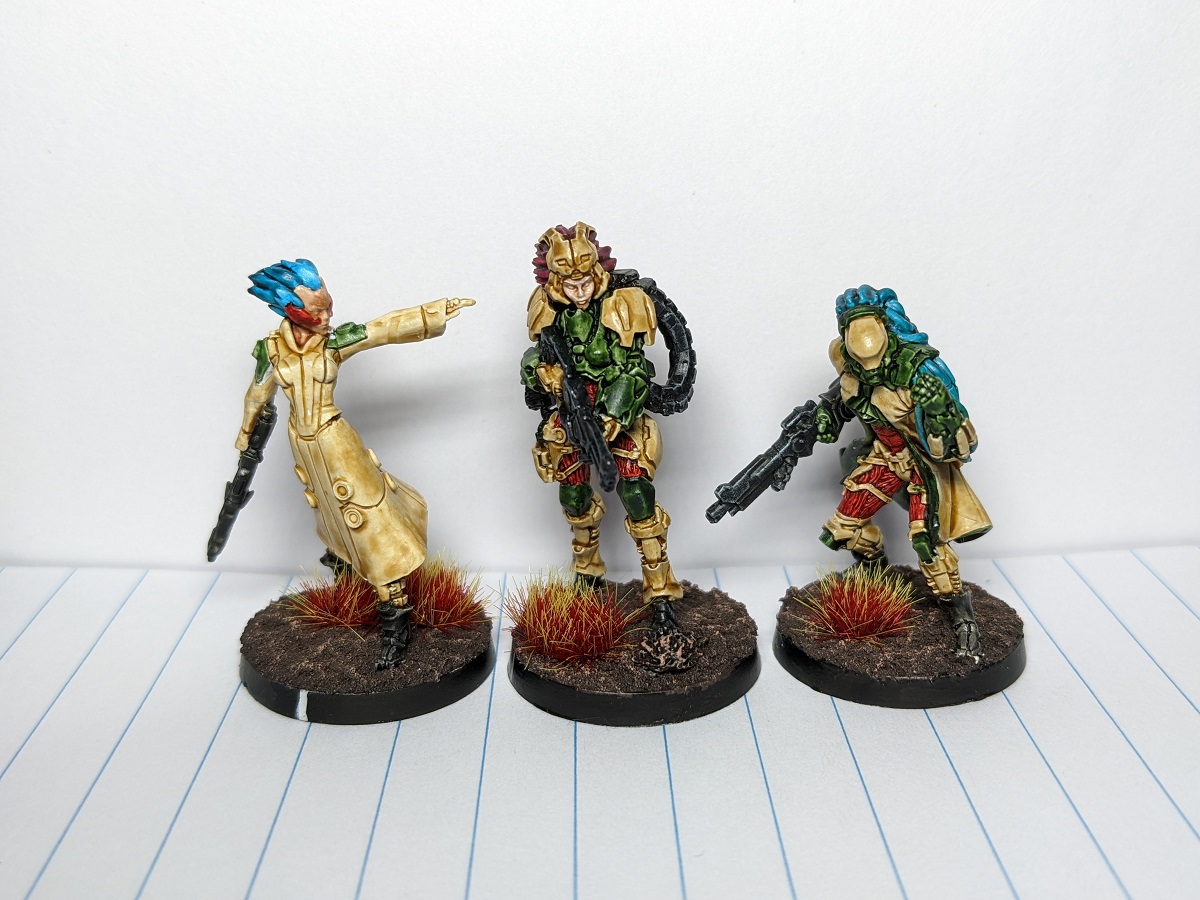 This is my go-to Tricore for the overwhelming majority of my lists.

Neema is your main gunfighter, and with an effective BS16 burst 5 spitfire, she will murder anything within 24 inches that isn’t wearing a ton of armour. She’s very durable with her 3 wounds (and potentially a symbiomate) and her WIP15 should make enemy camo markers consider their choices very carefully. While she can stab a fool well enough, she isn’t quite good enough as stabbing for it to be the best choice most of the time. You do however have to remember that she is a heavy infantry (so enemy hackers can make her sad), and she can have difficulties against heavier armour, but that’s why you bring the Kosuil.

The Kosuil is your backup gunfighter and the specialist of the triad, and he’s quite good at both jobs. K1 ammo is amazing against the TAGs that everyone seems to love to bring. Meanwhile being an engineer can be a life saver by removing the various debuffs that enemy hackers can apply, plus pressing buttons is important for various scenarios. 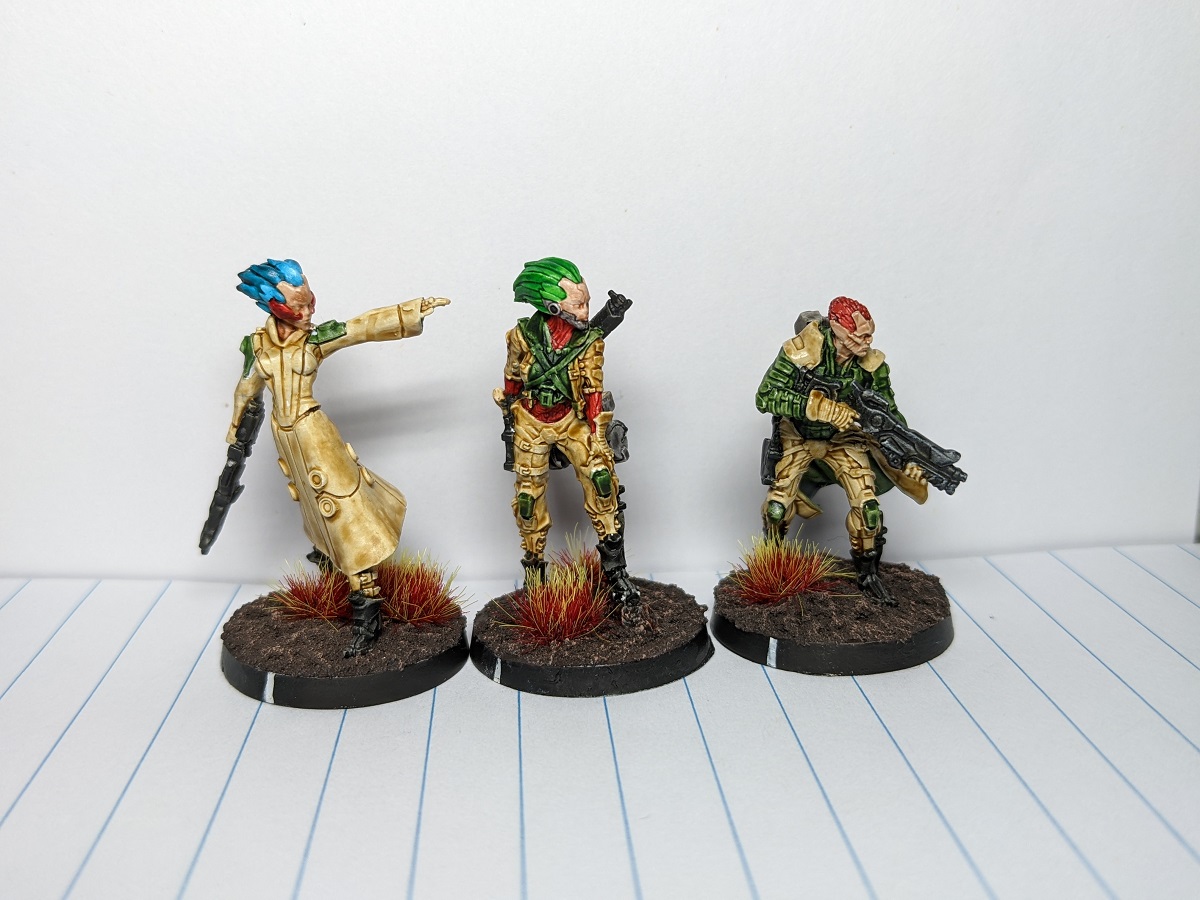 This used to be my go to tricore in N3 and early N4.

Unfortunately the changes to Draal from N3 to N4 have made this tricore no longer optimal. Your N4 Draal will feel indestructible with its Mimetism -6 right until you have to deal with a chain rifle. There is nothing more depressing than failing an armour save from a chain rifle through a symbiomate, and seeing your godly BS13 Mimetism -6 attack piece become a glorified fusilier. This lack of durability is the main reason why I’ve shied away from this configuration. However if your meta is light on warbands, running a tricored Draal will punish them.

Additionally, the AP Marksman Rifle doesn’t quite hit hard enough to get through heavily armoured foes while they have cover. But that’s part of why the Kriigel is there!

The Kriigel is key to making the tricored Draal shine. His smoke and mirrorball helps the Draal get to unexpected angles, and Eraser (plus the Draal’s mines) helps protect the Draal from retaliation. While normally the Kriigel’s lack of specialist skill would let it down in a tricore role, fortunately the Draal has that problem covered.

This tricore is particularly good to form during turn one. An effective BS15 MSV2 viral sniper can potentially make your game very easy by picking off your opponent’s overwatch and/or giving your opponent a big gun that can be difficult to deal with. Don’t expect your sniper to live very long, but it should take a heavy toll of your opponent’s orders and/or models before it inevitably loses a fight. But that’s when you reform your tricore into one of the above configurations and start bringing the real pain.

Forming Triads, Holomask, and you 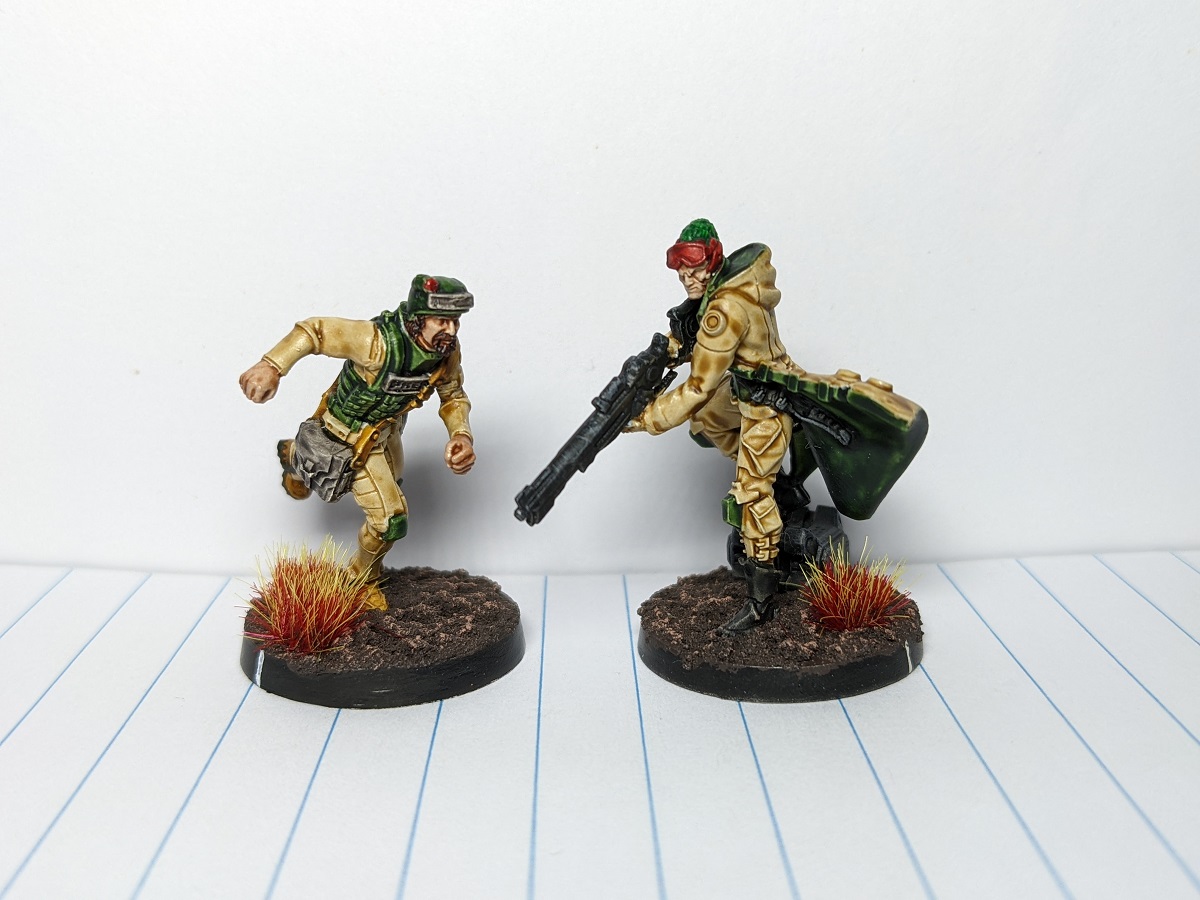 Corporate wants you to identify the difference between these two pictures.

Holomask on the Taagma Schemer is part of what makes Spiral so frustrating to play against. The deployment advantages you can gain thanks to Holomask are not obvious when just looking at a list. This is partially possible because you only have to form your triads when you deploy your reserve model. This can open up more tricks with Holomask than you’d think were possible.

As for other holomask shenanigans you can use:

Hopefully now you can see some of the power of holomask.

Le’s build some lists around these concepts. 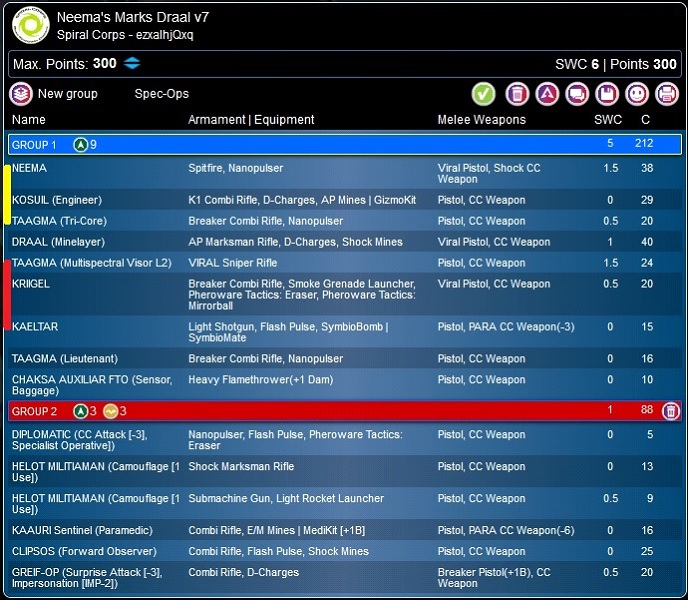 This is my current all comers, scenario-agnostic list. It’s running my gold standard tricore as its main attack piece, and a standard support triad for smoke and MSV2 viral goodness. While the Draal (who should have the symbiomate) can be in a triad, I’ve found it best a solo piece here, so that it can use his forward deployment to the fullest.

The Greif should be using the early turn’s orders in Group 2, to pick off vulnerable lieutenants, guided missile bots and/or support pieces. It shouldn’t be trying to dismantle your opponent’s core link. The Clipsos is in group 2 mostly as a plan B for if the Greif fails its roll or dies early. It could quite easily be moved into group 1 during the latter turns to press some buttons or to be a pest. 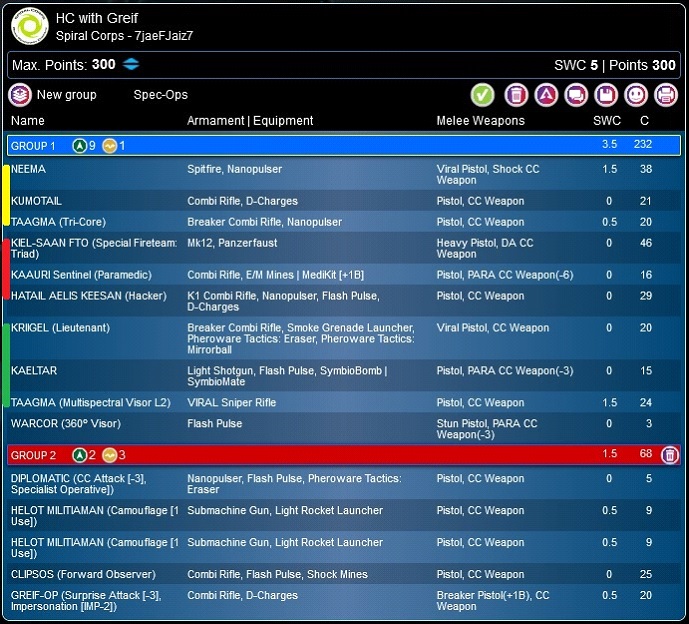 Inevitably there is the question of “But how do I run the Kiel-saan?” Now I don’t think the Kiel-saan is particularly good. However, the one place I consider it viable is for classified heavy scenarios (e.g. Highly Classified or Countermeasures). The triad of a Kiel-saan, a Kaauri and Aelis can do a lot of classifieds, and has enough punch to get into position to do so. Neema’s tricore is running a Kumotail mostly to save points, but sometimes being a doctor can be clutch.

The rest of the list is relatively self-explanatory. Keep in mind that the Greif can do a surprising number of classifieds if you can’t get at key pieces. The Warcor should be deployed as if it could triad with the Tohaa models to keep your opponent honest, and as always don’t be afraid to put the tagma sniper into the tricore on overwatch (impersonating as a 2nd Warcor) if you’re going second. It may die, but that is a sacrifice you should be willing to make.

So if you want to play as the real bad guys, and want a suite of shenanigans large enough to make a Shasvastii cry and Tzeentch smile, give Spiral Corps a call. Just as planned…

Thanks, Micro! And as always, if you have any questions or feedback, drop us a note in the comments below or email us at contact@goonhammer.com.