Upgrades unleased is the second of two preconstructed Commander decks from Kamigawa: Neon Dynasty. If you’re wondering, you can expect a bevy of these articles over the weeks to come; Streets of Capenna, Magic’s next expansion (and coming out soon) will feature Five commander decks, and fast on its heels was the next Un-set (I’m excited about Saw in Half… that card is gonna be crazy) – but that set has been delayed due to supply chain issues. What may be even more pertinent to this website, Commander: Warhammer 40k, is slated now to release late in 2022. So that means this year there will be:

So that’s at least 15, but probably more like 20 commander decks in 2022 alone, and that’s if they don’t release even more through Secret Lair. 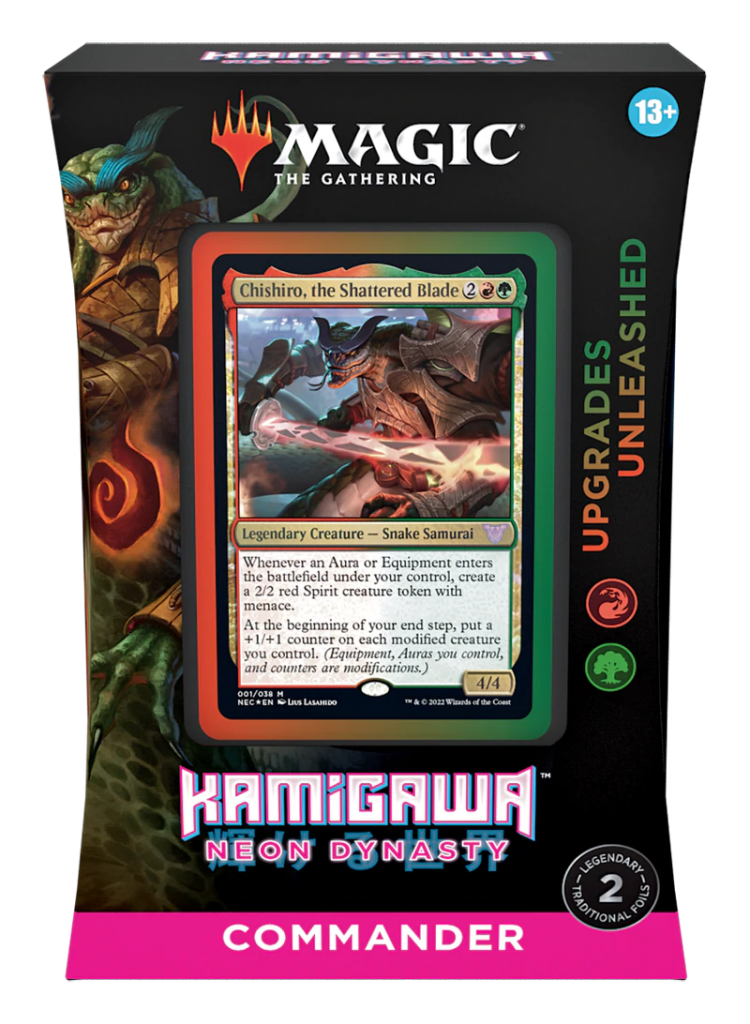 But our focus today is on Upgrades Unleashed, helmed by a red-green go wide and tall stompy kind of Gruul deck – with a mechanically interesting commander, Chishiro, the Shattered Blade.  Okay so, right off the bat, I want to say, that this is a weird ability but really pretty powerful. Gruul has some strong commanders, and this is another one.  It’s really disappointing that there’s no crossover here in terms of color identity with Jeskai, you’d really have an engine if you could combine this with Kykar, Wind’s fury, (bird wizard his bird brain is too small to do magic, it constantly puzzles me, look at that art. How). 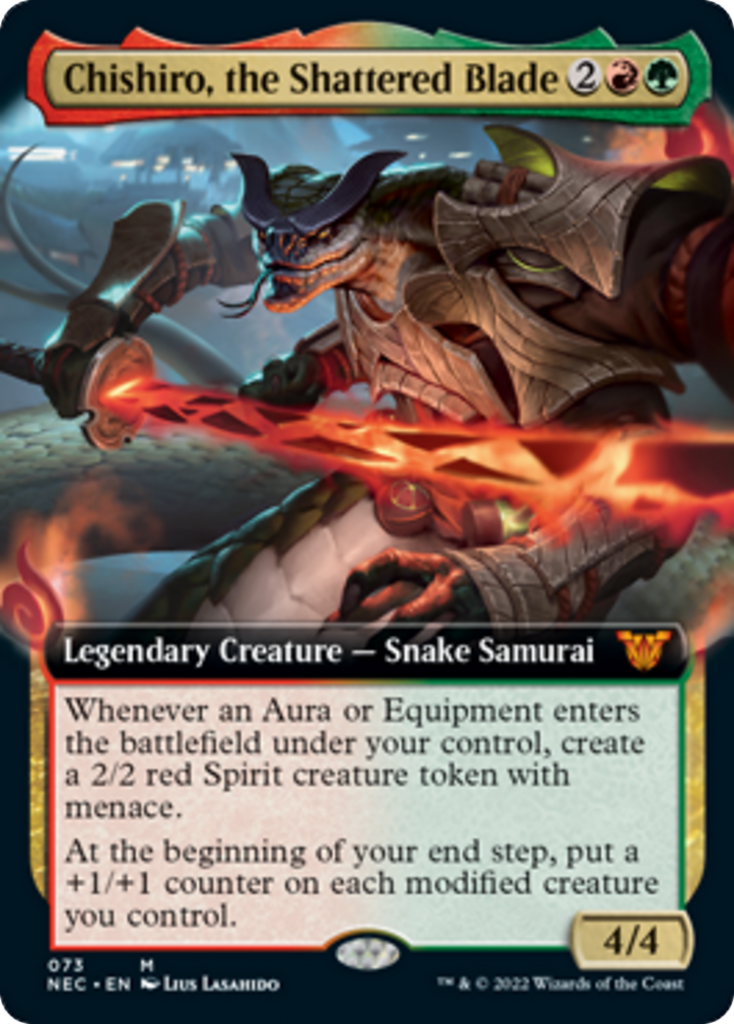 I’m not entirely sure why, thematically, it’s red spirits, but so is Kykar, so whatever.  A lot of the strongest spirit-related cards are blue and white, and that’s too bad.  Spirit tribal in various forms is becoming increasingly powerful, with the variety of ways to generate and gain value from spirits, as well as power them up or leverage their coming into play repeatedly with effects like Purphoros, God of the Forge.  You can set up a combo with cards like that as well, something that will keep resolving, like Locust God and Skullclamp or other such repeated effects, Kykar, Wind’s Fury has the ability to sacrifice spirits, including token ones, including token ones he didn’t create, for mana.

It seems a bit obtuse to take a commander like Chishiro, the Shattered Blade, which is focused on auras and modified creatures.  The nice thing about the way Chishiro works is it can snowball pretty badly, once create gets a +1/+1 counter from him it’ll always be modified, so equipment can be re-equipped to other creatures in order to make sure they are modified also.

Out of the box, the deck looks like this:

There’s a fair amount of actually contributing to the game plan with this deck.  To my eye, 29 creatures are quite a lot for a commander who makes tokens.  There is a fair amount of creatures that play into the game plan of the deck – putting +1/+1 counters on your other creatures, but also things like Kaima, the Fractured Calm yet not too many auras to place on opponents’ creatures (aside from Smoke Spirit’s Aid [which is a rather neat spell, nonetheless]).  There’s not a significant source of ramp for the deck, nor any searching or deck thinning, which is pretty standard for pre-cons, there’s also not a card draw, virtually none.  So this is a deck that, if you play it out the box, is going to have a lot of frustrating games, where you don’t have enough lands to really cast all your creatures, you can’t ramp into mid-game effectively if you miss land drops your hand and board presence will stagnate, and there’s very little interaction or control, or even defense for your creatures, and your game plan is basically “get lucky on a slow burn and generate so many +1/+1 counters your creatures overwhelm you, opponents”.  Oh and absolutely nothing to be done about board wipes, not really much defense vs fliers.

To rebuild the deck we want to include the standard package of green, 2-cost, sorcery fetch forests and lands spell to ramp out some.  Cut most of the creatures, we can get our creatures by casting auras.  Honestly, 2/2 spirits with menace is pretty decent.  We can also use the cheapest of the land auras to ramp, if we get them really early drop them to get Chishiro out faster, he’s our key.

Once Chishiro hit’s the board, we can be generating tokens off every aura and equipment we drop.  We want “good” equipment, the bog-standard ones, like Sword of the Animist and Sword of Hearth and Home, Bonesplitter will make copies of itself, to keep generating and equipping spirits, that’s amazing for us, skullclamp is just flat out amazing, pretty much always, though this is one of the few times where the fact our spirits are 2/2 works against us, we can’t just eat them with skullclamp.  Nonetheless the card generally generates good value, you can frequently convince players to block a 3/1, swing it at a planeswalker, or something like that.  However if it underperforms it could certainly be cut.

Since reconfigure is in this set it seems worth including some of those equipment/creatures, they work fabulously with Chishio, they come into play and generate a spirit, then you can equip them to the spirit to get the +1/+1 counters flowing.  There’s also a neat trick you can use these for, since they are equipment and creatures, you can use them as your target for a creature to exile and return with Sword of Hearth and Home in order to generate another spirit.  Other than that the deck doesn’t have a lot of great targets for that equipment, but even so fetching lands is very useful.

To get some card draw there is Ohran Frostfang and Toski, Bearer of Secrets.  Other than that the deck should mostly play out in a fairly linear fashion.  Okay card draw combined with a lot of land fetching will thin your deck to make it likely you’ll keep drawing auras and equipment, which generate your tokens, you can equip them and swing or not as you need, get your +1/+1 counters and eventually go both wide and tall, attacking players with a small group of relatively large creatures, many of which will have menace.

It’s notable that curses are also auras, so running Curse of Opulence should pay off pretty handsomely.  If you have the opportunity to trade spirits to kill cards you should definitely take advantage early, forcing bad blocks or getting players to throw away utility creatures or dorks.  Otherwise, early swings for 2 and 3 should add up in a couple of turns as your creatures grow.

Next week – A real voltron deck.  Like really real.  Also another edition of Commander lessons, and how to set up, and draft, a commander cube.