Crisis Protocol Tournament Report: Journey to the (Even More) North

This week Tony Moore joins the Goonhammer team to talk about his recent trip to the north for a Marvel Crisis Protocol tournament and playing with Weapon X.

For those of you who are not so familiar with UK geography, Stockport – which is just southtony of Manchester – is about in the middle of the UK, though we call the area “the North West.” About two hours’ drive north of us is the border with Scotland; however, we were going to the North East which is about 50 minutes East and then about an hour and a half north from there. In Game of Thrones terms that means I’m somewhere near Riverrun and drove to Whiteharbor for the event.

Rather than do the trip in one go we did some sight seeing on the Saturday and after a lovely cooked breakfast made our way over to the venue – ProTech Games. This was my first time at the store and I was very impressed by the venue. Plenty of well stocked shelves full of stock surrounded the gaming area where tables were set up ready to go.  The staff were all super helpful and available to serve snacks as well as hot and cold drinks all day. The toilet facilities were very clean and maintained all day which is also a bonus.

The other thing waiting for me was the Weapon X Rival Panels box which I’d ordered on the Friday for collection as I wanted to run the new affiliation on the day.  True enough I was handed the box almost as soon as I’d stepped through the door.  Note that I had printed models for both Logan and Alpha predator ready as I always play fully painted.

These were the updated mission cards, as seen below. The only real change to these Secures was that Intrusions no longer does damage when you use the portals.

All three of my chosen Extractions had some changes with Researcher now only giving one bonus point at your station and not two, Montesi becoming a mystic rather than energy attack (useful for my physical heavy list) and Legacy Virus having a bit of an overhaul as it no longer removed conditions and only grants 6 points when collected together on one character during the cleanup phase.

I was hoping to play higher threat levels to try out more characters in the affiliation and (spoilers) ended up playing 19 threat in all four games. This meant that my character line-up remained unchanged. I wasn’t tempted to run the Sentinels really but it was nice to have a more control minded answer in the list and they didn’t take up much in terms of characters or tactics cards anyway.

Dossier
Are You Sure You Want to Remember?
Jonathan the Unstoppable (games one and two)
X-Ceptional Healing
Patch Up R
Happy Birthday, Runt! (games three and four)

Will is a great player and really friendly. His X-Men took the best painting spot at the event. He was running X-Men Gold with Storm, Beast, X-23, Honey Badger, Magik, and Jean Grey.

With Logan holding the leadership card and Creed chasing the dossier from Storm we were set up.  The score went 1-5 to Will then 2-10 to Will as I concentrated on beating stuff up a little too much and I think I made a bit of a mistake here with them and should have hoovered up a few more early points – I don’t mind going behind on Demons but with 6 points for Extremists I left myself too much work to do mid game.

There were also some positional errors on my part with trying to keep Logan out of three for the re-rolls but then using out of activation movement from X-23 to put her within three the nest activation. The game finished 13-15 with Will taking the win.

In hindsight I would have used Logan to chase down the Dossier so he had the room to fly solo and let Creed take the helm in this scenario with it being so compact.

Special mention to Honey Badger and Jonathan too – the little furry fella scored 3 of those 13 points over the game on the back point as no one came close enough to send him packing. 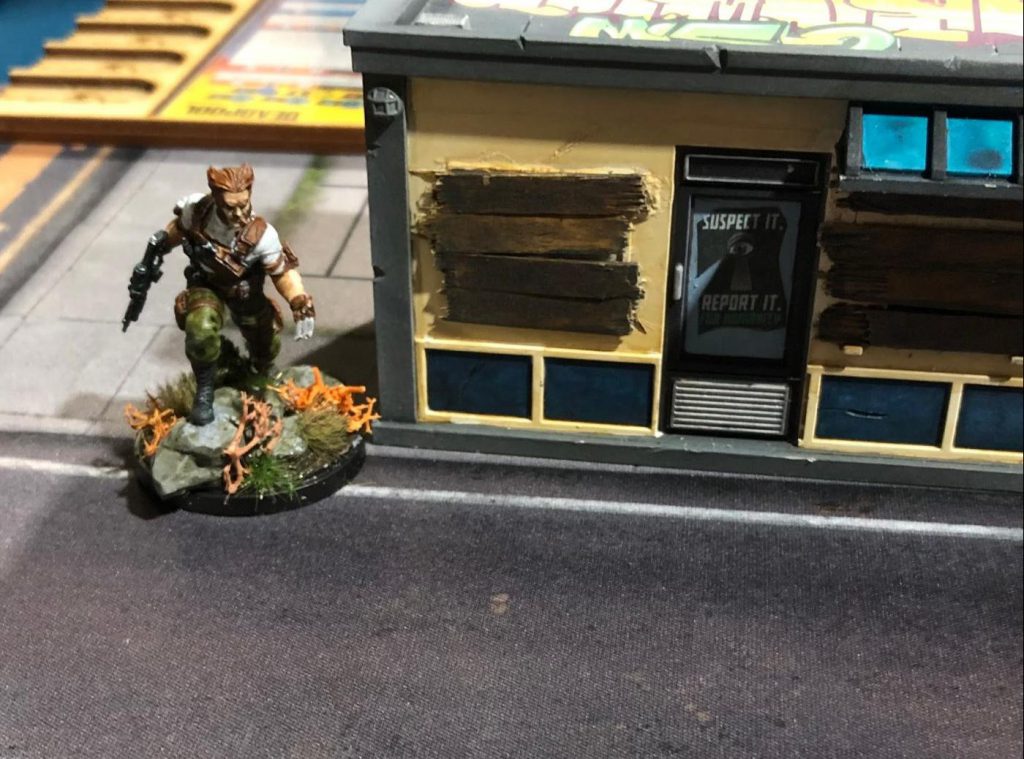 A note here: the score was entered incorrectly in round one and so I was playing top table (so many events use random tables I didn’t even think about it), but this was corrected in time for the final standings.

Michael was running Hydra, led by Mr Skull himself and backed up by Zemo, Mister Sinister, Bob and Ghost Rider.

Now I felt this set-up suited me better as the different scoring points were spread out allowing me to split my forces.  Again Logan was the leader and Creed chasing the Dossier off Ghost Rider.  Logan went to my right against both Zemo and Sinister, Deadpool central opposite Ghost Rider and the rest on my left against Skull and Bob with Creed left off centre.

I won’t give a blow by blow account but I have to give special mention to Logan, who one-shotted Zemo turn one (thanks to the rerolls for having no friends around), placed in range to pick up the virus and then contested the secure turn one – indeed Mr Howlett what you do isn’t very nice!

The rest of the game was fairly even despite the end score of 19-12 to me but my greater numbers eventually won the day and with a combination of Domino giving incinerate and Honey Badger’s ‘Ankle Biter’ rule Red Skull was quick to fall.

James was a newer (though confident) player running an Avengers team with plenty of core box characters so we were up against Captain Steve Rogers America, Captain Marvel, Ms Marvel (Dossier holder), Ironman, Winter Soldier and Widow.

At the start of the round it was announced that the spot prize would be the first player to use all five tactics cards – I felt I had a pretty good shot at this one as 2 cards are used before the game starts so I switch out Jonathon who is less useful on portals for Happy Birthday, Runt! which can be used a little easier and so by the end of turn one I’d burned all my tactics cards for a bag of swizzels sweets which my daughter quickly claimed. I feel that was the right call!

The game was fairly standard on this kind of map with separate fights across the table though very little teleporting. I prioritised Winter Soldier on my left and Ms Marvel initially to get the Dossier back.  Deadpool also had one of those games where he double dance partied and decimated the area around the central point in what was basically the only real contribution.  The game finished 18-7 to me with Cpt America, Ms Marvel and Cpt Marvel making for a very confusing end of game   going to hit Cap (which?) or pounce into Marvel (which?).

Game 4: James Doxey – Struggle for the Cube and Intrusions Open

James is a top player who heads up events at Leodis in Leeds and a regular player at events.  Very clean player and great chap to boot.

Intrusions again so stuck with Happy Birthday, Runt! over Jonathon due to how easy it is to move around the objective points on this Crisis.

James played this really well and forced mistakes on my part, with Widow hoovering up cubes and She Hulk tanking the hits into her – there was a play with Creed doing a happy birthday that I missed the turn before Widow did a runner (no reactive powers so no bodyguard).  The only other point of note was a bit of bad luck on Logans part failing to take out Venom on 2 health with 7 dice and then getting taken out on the reverse with 5 which could have forced another round but can’t complain too much as I would have still be up against it in that final round. So the final score finished 17-5 to James.

Overall an excellent weekend and event.  My thanks to Anth for running and ProTech for hosting. Top To marks to Anth who remembered that my daughter and I are caoliac and picked us up some gluten free alternatives to the mince pies.

I finished fifth, which I was more than happy with for a first time out with the Weapon X team.

Weapon X are fun.  They can score and they can kill so you have both angles covered.  Their leadership keeps things alive and moving and I found I was burning through memories like a speed read of the X lives of Wolverine itself.  The other think I really like is when characters inevitably get dazed or KOed (as you tend to over extend) it feels that you get something in return so ever your team being decimated has a plus side.

New Logan is definitely the Wolverine we all wanted.