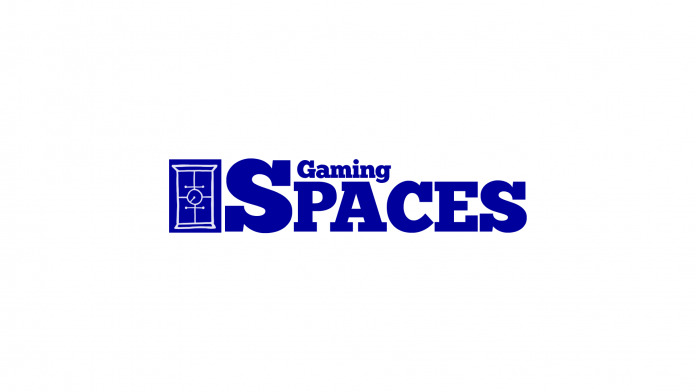 In Gaming Spaces, we look at the spaces we’ve built to game in, talking about how they were built and how we’re improving them. In today’s article, we’re looking at Charlie Brassley’s space, referred to by his wife as the Barton Museum of Tiny Menz.

In 1979, some cheap council houses were built on the outskirts of Oxford. The main materials: wood, hope, and tin cladding. Thirty years later, when I was in the extremely privileged position of looking for houses to buy, Oxford’s cheapest housing was at the upper limits of my reach. I became the semi-proud owner of stained carpets, dodgy electrics, a crazed patchwork of woodchip wallpaper, a garage roof that closely resembled a colander, a crapper that wasn’t even attached to the floor, and other, leakier problems. The house was technically livable, but it had strong student dive energy.

The biggest problem: I lacked the money to fix it.

Skip forward a decade and the house is starting to resemble the Ship of Theseus. At this point everything barring the bedrooms has been replaced pretty much entirely. For the most part I no longer live in a fire hazard, so that’s nice. (He said, dooming himself to a crispy death.)

Most recent among these eye-wateringly expensive renovations (recent as in, finished a week ago at time of writing) is the downstairs… room. I say “room” because it’s the “everything except sleeping and cooking” room, and for me, that includes gaming.

Since this is a shared space, it needs to be pleasant for non-nerds while also being quick and easy to transform so I can get a game on a 6×4 table. With this in mind, when we did the renovation, we replaced the hilariously structural stud wall bisecting the room and replaced it with a steel girder. All of a sudden there’s enough room in here to swing a badger. And, crucially, two 6×4 tables when there’s extra nerds and/or a desire to play Apocalypse games. We also removed what we referred to as the Swedish Porn Chalet feature wall installed by our predecessors:

With the sins of the previous occupants banished, this is what we ended up with:

Yes, yes it is. We got a nice man in Edinburgh to make it specially. The top is made from reclaimed wood, and while normally this makes Dom’s tables charmingly characterful, it can also make them a little bumpy, which would prevent terrain lying flat. He agreed to plane it flat for us, and victory was achieved. I should also note that this table is sturdy AF. Probably the kind of table they were thinking of when they made those hilarious infomercials about taking cover during a nuclear war. 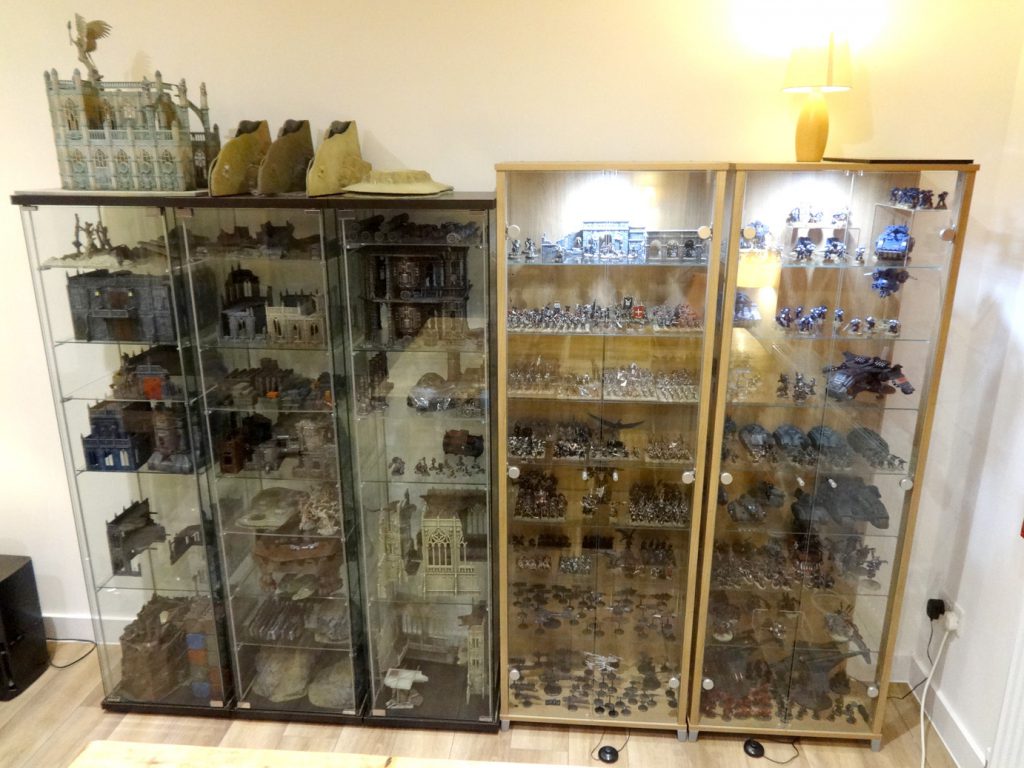 I’ve got 5 glass cabinets, which is a number of cabinets that says “yes, new friend, I am a massive nerd, what of it?”

Three of them are the ubiquitous IKEA Detolf lads (with extra shelves from eBay). The other two are from displaycabinetsuk.co.uk which, having been purchased with the extra shelves, are a really REALLY good size for displaying 28mm armies, and come with a light fitted. The downside? The build quality is not as sturdy as the Detolfs, so I honestly don’t think I’d buy these again. But they’re here, so I’ll use them.

Like some of my fellow Goons I’ve added acrylic display stands to further improve the cabinets’ efficiency.

The current chairs are hand-me-downs from work; they were chucking out a bunch of office chairs. These things are ugly as hell but extremely comfortable. This didn’t matter when the whole room was ugly, but now we’ve upgraded, they’re getting replaced. In a hilarious example of where UK logistics are at right now, the seller gave us an impressively vague delivery time of “2-14 weeks.”

I also need to dustproof the cabinets, because dusting miniatures suuuuuucks, and also maybe add more lighting to them. Oh, and put some sort of decorations on the wall. Not Warhammer art, though, that’d be a bit much for a shared space. Which I appreciate sounds rich, given all the cabinets.

What about actual terrain though?

One’s gaming space is only as good as one’s terrain collection. If you have a nice room but fill it with unpainted polystyrene hills and a few bean tins, no-one’s going to be stoked to come round. Don’t get me wrong, I’m not saying one has to spend £££/$$$ on plastic GW kits; outdoorsy terrain like rocky outcrops and foam buildings can be produced quite inexpensively with a little time and enthusiasm, and there’s a bunch of Youtube channels (like Geek Gaming Scenics) dedicated to showing you how. Plus you can get a lot of buildings done with plasticard and foam. I’m just lazy, so instead I’ve been slowly buying terrain kits since I moved to Oxford in the early 2000s.

Gaming mats are quick, zero effort, easy to store, price efficient, and nice to roll dice on. Unfortunately they also leave me cold; something about 3D terrain on a 2D printed surface feels un-immersive compared to a physical board. I’ll genuinely take a medium-tier physical board over a top-tier mat. I appreciate this makes me A Bit Weird.

I have at least committed to this weirdness, and have four of the old Realm of Battle boards stuffed under the stairs: two grassy, one desert, and one snow. Why two grass boards? Well, one’s a hand-me-down from a late friend, and having two is useful for multiple Fantasy tables and/or Apoc games.

I’m also working, piecemeal, on carving a 40K city board out of foamex sheets. Eventually I’ll have carved enough for a full 6×4 but for now, I’ve got the plain textured grey MDF tiles I made way back when I first moved here.

There’s stuff suitable for the desert/grass/snow/urban biomes provided by the boards, from gothic ruins to Ork shanties, medieval cottages and snowy alpine trees. It’s probably enough scenery to fill 5 or more tables, and is variously stored in the Detolfs and under the stairs. A cupboard would be prettier, though, since stacked terrain can be a bit of an eyesore.

The current mission is to improve my 40K/Necromunda urban stuff. I already have a bunch of urban terrain, but ruins without rubble always look weird, so it’s time to take things to the next level. I’ve made a start on that, though:

When all that urban stuff’s done (in about a decade) expect a tutorial right here on Goonhammer. For now, though, that’s it from the Barton Museum of Tiny Menz. The new room’s already seen its first few battles, and it’s already made the months of dust and house-juddering noise feel worth it.

That wraps up our look at Charlie’s space but keep an eye out for more Gaming Spaces articles in the future. And if you have any questions, shoot us an email at contact@goonhammer.com.