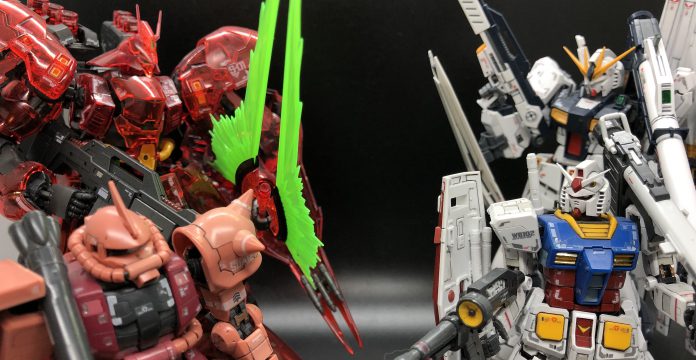 In the latest installment of a new Bit here, we’re reviewing Bandai’s gunpla, a model kit of a robot from the Gundam universe. It’s a little outside our usual coverage, and there might be some light spoilers for the anime. This week: Bandai’s No Grade 1/60 EC 160 Injection Machine

This is, uh, not actually from a show. It’s from real life. This is a scale model of the machines that Bandai uses in their factory to make Gunpla.  The model itself says Bandai Hobby Center 2006, but it’s unclear whether that’s the date of the kit’s release, or the machine it’s based on. I bought it online, during the GunPla Expo in the summer of 2020.

Normally, the Expo is a big to-do at the Gundam Base in Tokyo, with a host of new and exclusive kits that you can only buy in person, some of them re-releases and some of them never-before-seen. Highlights that year were a two hundred dollar metal candy-coated Sazabi VerKa, a clear version of the Master Grade Barbatos (which I’ll be reviewing soon), and the usual limited-run marketing crossover RX-78 color variations. 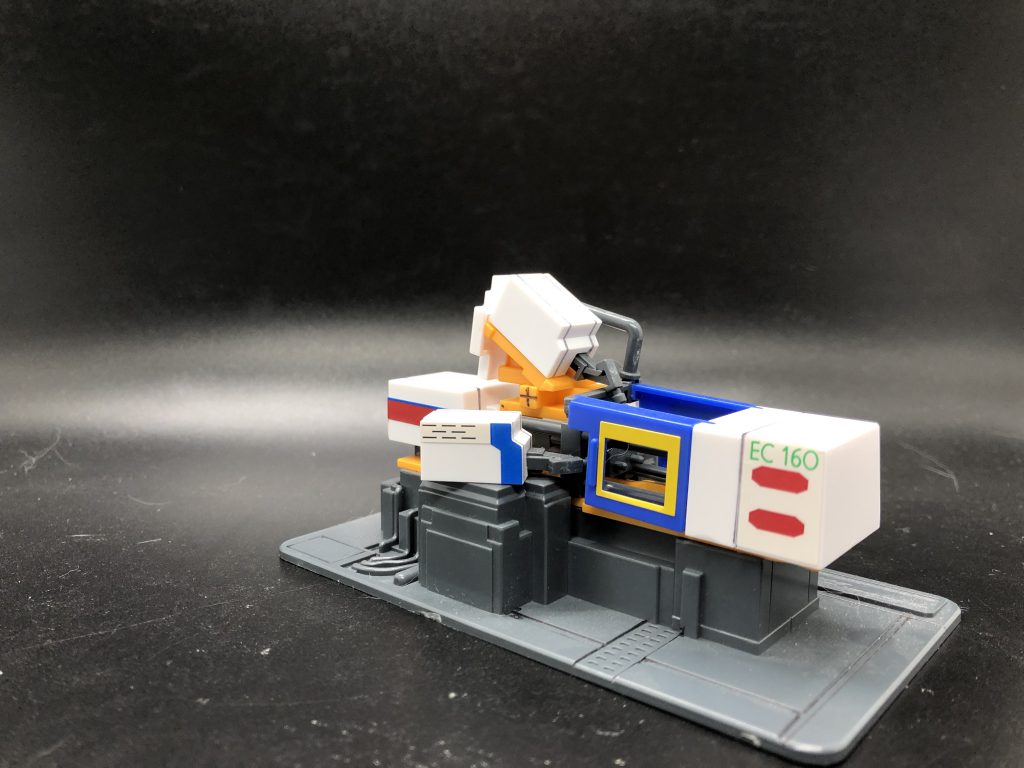 2k20 being the Summer Of Nobody Goes Anywhere, the absolute peak of (to date) the Bad Times, Bandai did the smart thing and moved the whole enterprise online. It made business sense – no sensible person was going to raw-dog the pandemmy over this, and anyway Japanese passport control wouldn’t have let them in the country if they’d tried, so there was no way to move all that plastic otherwise – and was marketed as a way for the Gunpla community to come together to the greatest means possible. I remember the marketing coming off a little sad and sweet, and it was also a good way to re-up the backlog that, with lockdown giving me far too much free time at home, I’d been mercilessly plowing through.

It ended up being a bright spot in an otherwise harrowing year. This was before vaccines, before we’d “learned to live with the virus”. I put that in scare quotes because I think it’s a cop-out when used by authority figures who had the ability to do something to prevent the current state of affairs, but it’s also not inaccurate, factually speaking: we have, the ones of us lucky enough to be given the opportunity at least, been forced to figure out how to live with it, because it sure isn’t going away any time soon. But this was a time when no one knew that was going to happen. We had armchair epidemiologists in every home, and daily briefings from the CDC on TV, but we didn’t really know how it spread yet. Life hadn’t gotten stupid enough that people were mainlining horse paste yet, and I was still disinfecting my Amazon packages. It was a different world, and it felt like an inflection point in the arc of history. I’m not naive enough to think that Bandai meant to create a “global Gunpla community” in that environment as anything other than a way to make a few bucks, but I did at least appreciate them taking the effort to dress it up as something greater. A lot of companies these days don’t even put in the effort to lie to you anymore. 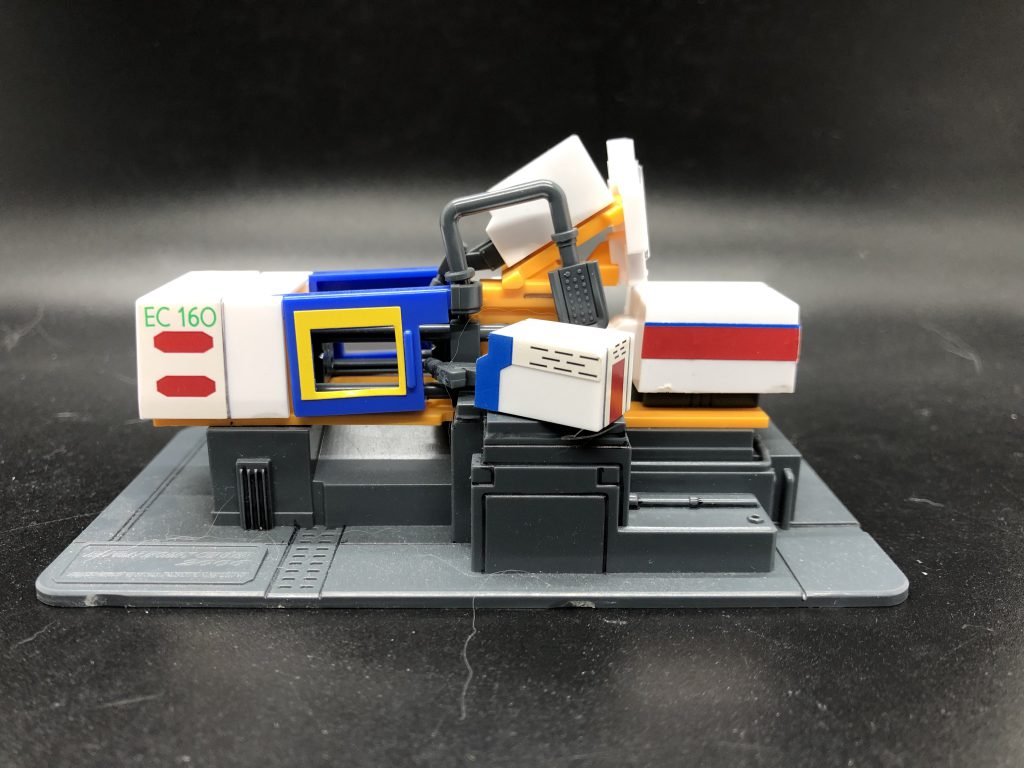 I’d actually been to Gundam Base in person the year before, on what remains one of the last trips I’d ever go on (we snuck a honeymoon in about two weeks before everything shut down, legitimately perfect luck with our timing there). It’s where I bought the clear Sazabi I talked about last time, and a number of other kits that I haven’t looked at yet. I saw the EC 160 Injection Machine then, but I didn’t buy it, for multiple reasons (ie, my wife was becoming visibly bored at this point, and I only had so many suitcases anyway). This, in the midst of global turmoil, was my second chance, and I took it. It’s not the same as if I’d picked it up off the shelf in person, walked over to the counter, and attempted in halting Google-translated Japanese to complete the transaction, but it’s close enough. It’s as close as I’m liable to get, at any rate.

I’ve been thinking about that a lot lately, the slow contraction of my ability to move around in the world. At first it was just (“just”, he says) the pandemmy, but it turns out there’s an even more restrictive set of circumstances: becoming a parent. I can’t leave the house – I don’t want to leave the house – because there’s a tiny human in here that needs constant attention. The version of me that went to Japan in 2019 and went hog wild at the Gundam store is gone, for a while, until the kid is old enough to fly that long and I can afford an extra plane ticket. Hell, the version that ordered this thing online in 2020 and had time to build it has gone missing, until I can sleep more than four hours a night. Priorities have shifted in a major way, and while I don’t regret it, and wouldn’t change it, I think it’s fine to be a little wistful, sometimes, when you see a photo you took of yourself next to a life-sized Gundam in Tokyo, and you remember how it felt, standing in a new place and breathing strange air, doing something and being somewhere you’d never done before and realistically won’t do again. Then I look at this dopey little model kit of a piece of factory equipment, and I feel a little less cut-off.

This is an out-of-box build, stickered and partially panel-lined.

Articulation is literally non-existent. There are no moving parts. Color accuracy is also not great, and the sticker sheet is almost as big as the two runners of parts – though to be fair they’re mostly warning labels and text, with only a few color-corrections. Surface detail actually isn’t bad: there’s a good amount of mechanical detail, and the molding is crisp and detailed. It would have been nice to have clear parts for the windows, but for all I know that’s accurate to the real thing and the molding chamber really is open to the air. 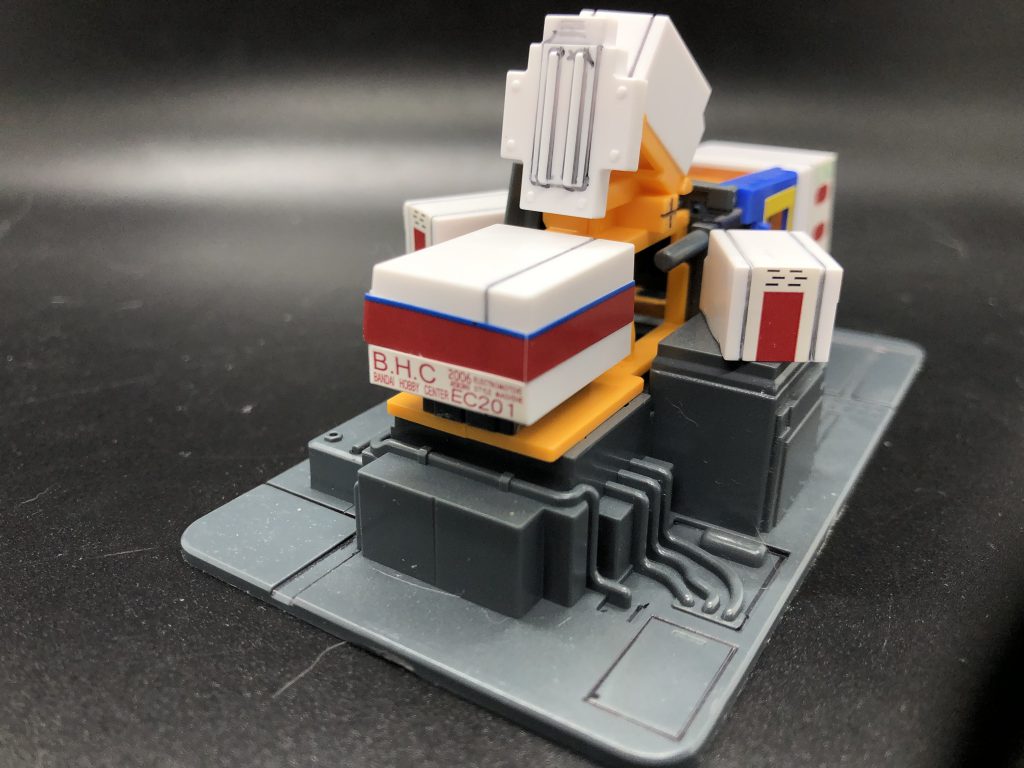 That said, I love this thing. It’s goofy and weird and utterly unique. The meta-appeal of this isn’t lost on me – a scale model of a machine that makes scale models – but it’s also a legitimate Gunpla-style kit, molded in color and snapped together without paint or glue, with the normal level of fit and finish you’d expect from Bandai. This extends down to a part buried deep inside the mechanism, that you can barely see, but is a model of the injection molds. So what it is, is a 1/60 scale model representation of the two sides of a mold of a 1/144 scale model of a Gundam (I think, but am not sure, that it’s the High Grade RX-78-2). It is shockingly tiny, and almost invisible to the naked eye at very nearly 1/8700 scale, but also just as crisp as any normal Gundam part. The only time in all of scale modeling that I’ve seen someone go this hard on something so inane is model trains.

This being 1/60 also makes for fun size comparisons with Perfect Grades. I assume, to a Gundam, the injection machine is somewhere between a parent and a God, but it’s absolutely miniscule. It probably would feel very rewarding to smash.

Hard to say, but also easy to say. The hard answer is “maybe”, because while this kit has minimal parts, zero articulation, and poor color accuracy corrected by a huge sheet of stickers, but it’s also charming and costs ten bucks, which may or may not forgive a lot of those problems, so I don’t have a clear answer. It’s easier to say “no”, though: this is, technically, a Premium Bandai kit, and it’s not currently available, so whether you want to buy it or not, you can’t. Sorry.