Mysterium: A Game of Murder and Seances 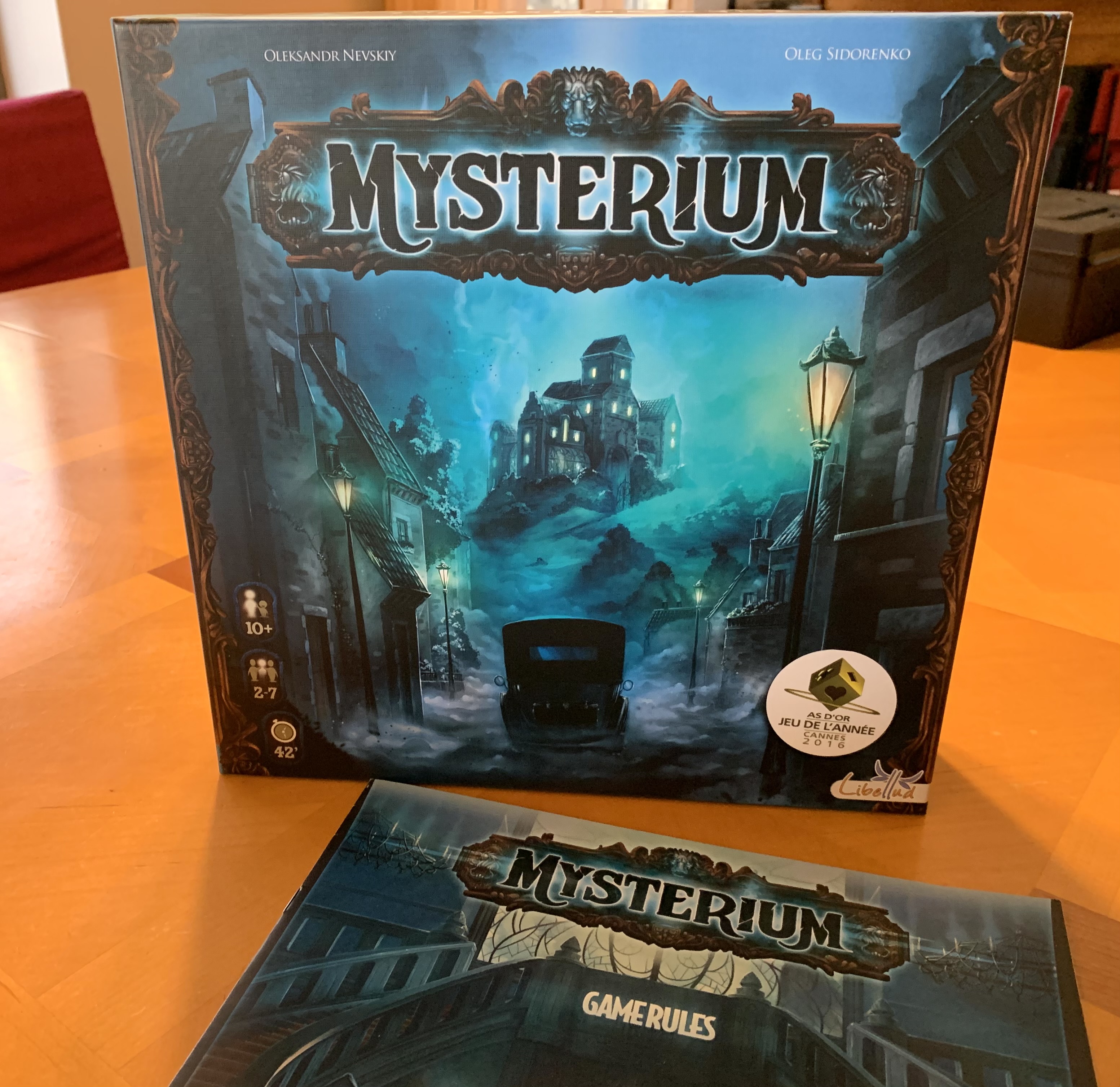 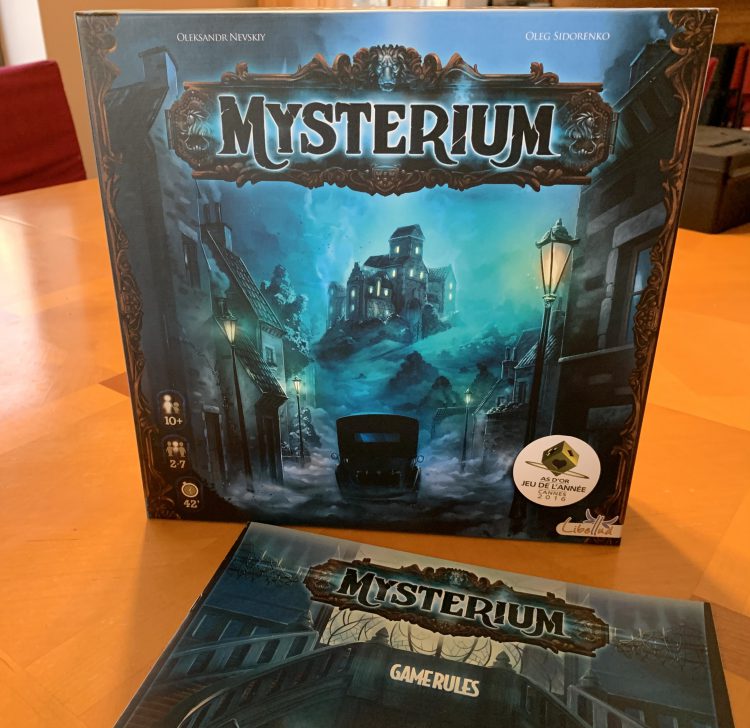 I refuse to acknowledge that spoopy season is over, because that means no more Pumpkin Spice everything. So we still have a chance to break out some seasonally appropriate board games. Since my wife has a catastrophic irrational fear of all things zombies, in our house that usually means playing Mysterium.

Ah, Mysterium. To quote the Roman poet and shitposter par excellence Catullus, I love and I hate.  This is possibly the most frustrating game I have ever played, but it’s very simple and the art is beautiful and there’s something about it that keeps drawing me back.

The long and the short of the game is this: it’s a collaborative game where everyone wins or everyone loses. One player is the ghost and is handing “vision cards” of abstract art to the players, who are psychics trying to solve the ghost’s murder. The meta story of the game itself doesn’t hold up very well but it’s not that important. The psychics have 7 rounds to try to identify a person (the suspect), location, and a murder weapon. There’s also a fairly gamey bit where players bet on whether the other players guessed correctly or not, which is weird in a collaborative game, but the real meat of it is guessing the suspect/location/weapon. If the psychics fail to successfully identify all three elements everybody loses. Otherwise you pass on (pun intended!) to the Big Final Round where the ghost gives clues as to which combination of suspect/location/weapon is the correct one and all the players vote on which is right.  In my house at least, if everyone at the table is still speaking to each other by the end of the game then everybody wins.

I’ve played Mysterium dozens of times with people all over the gaming experience spectrum and it’s almost always a hit. The fundamental bit of the game – trying to match up a card to what the ghost wants you to pick – isn’t intimidating for folks who aren’t hardcore into board games, and the interpretation part is interesting enough for the more experienced crowd. At the root of it the “board game” part of Mysterium doesn’t really matter. You could play it with a bunch of any impressionist paintings, or stills from movies, or even sonnets. The game is really about trying to read the ghost and suss out what the heck they mean by giving you this specific card.

One bit of advice if you’re bringing Mysterium out to a group that’s never played it before:  Don’t say “It’s like Clue.” It’s not, shut up. Sure, there’s a murderer, a location, and a murder weapon but that’s about it. The play isn’t similar at all, and it may get folks thinking down the wrong path about what to expect. You wouldn’t introduce poker to someone by saying it’s like chess because they both have kings and queens, It’s not a helpful comparison.

Let me break down the whole psychics and vision cards thing a little more so you can maybe see why this game drives me to a murderous rage. At the start of the game the Ghost selects a person, location, and weapon card for each other player in the game.  All of these cards are then laid out on the table for all players to see, along with a couple extra in each category to provide some uncertainty. [Editor: This represents the suspect/weapon/location theory each player is advancing, not the actual murder]

First up is identifying the suspects. The Ghost draws a hand of these vision cards featuring gorgeous, elaborate, abstract art and has to select one to give to each psychic hoping that something in the card will make a connection to the correct suspect for each player.  It’s like Pictionary, if the drawing player is on a massive amount of drugs and also insanely talented. The ghost isn’t supposed to speak (maybe this is why my wife often asks me to be the ghost…) or give non-verbal clues in any way, they just get to sit there and watch as the players completely misinterpret the art on the cards and select the wrong suspect.

To be clear though, I’m not saying the psychics are dumb or doing something wrong (well, not always). Reading these cards and trying to figure what the hell the ghost was trying to tell you is really tough. There’s a lot going on in these cards, both the vision cards and the suspect/location/weapon cards themselves – is the ghost trying to make a connection based on the dominant color pallet of the card? Or some minor element like a pierce of string? Or maybe there’s something on the card that kind of sort of looks like something on the suspect card. The one consolation is that since it is a collaborative game the psychics can all compare and share suggestions. The specific psychic you gave a card to might not make the connection between the white bear on the card and the white bearskin rug in one of the locations, but hopefully someone else at the table will pick up on it.

And on the ghost’s end, selecting which card to give is torture as well. You only have seven cards to choose from, and more often than not all your choices are terrible but you have to find some connection to the suspect, however tenuous, and pray the players can actually read your mind. [Editor: If you’re luck, you can pick up on what the players are keying into and guide clues accordingly. More likely they’ll stop paying attention to color and move in a different direction but when it works you legitimately feel psychic.]

So the first round goes by. Maybe some players managed to guess correctly – they get to move on and try to do the same thing all over again with locations. The players that didn’t guess correctly will have to try to guess the suspect again. This time they’ll have the vision cards from both rounds to look at, and fewer choices in the pool of suspects, so if the ghost is lucky maybe they can double down on some element (water, flying things, the color green) that will make it easier for the psychic to figure it out. More frequently though the ghost’s cards will be shit but they can’t say anything about it, so the psychic will try to piece connections together between the multiple vision cards while the ghost weeps silently and prays for soul-death.

And this is where we get to why this game drives me nuts: for some people it’s super easy. They have some kind of intuitive sense or maybe a deep connection with the ghost player or a pact with the devil, I don’t know. They can look at a card with a bunch of giraffes in a hot air balloon flying over some minarets while dark clouds overhead rain down springs and gears and say “oh, you mean the nun!” It’s uncanny, and there’s usually one of them at every Mysterium table. I hate these people. I want to beat them to death with a ouija board. Because, as you may have gathered from my tone, I am rubbish at this game. Both at being the ghost and being a psychic. If the ghost wants me to guess the nun, they need to hand me a goddamn picture of a nun. That is the extent of my intuitive prowess. It’s not you, Mysterium, it’s me.  I’m not an artsy person. Like, at all.

Having said all that, why do I keep coming back to it? It’s fairly quick, it doesn’t have a ton of detailed rules and mechanics to remember, and most of all it’s freaking gorgeous. And despite the self-imposed pressure and anxiety involved it’s really a lot of fun. At the end of the day, for me at least, that’s the most important part. If I only played games I was good at I damn sure wouldn’t be pushing little plastic spacemans around a table for hours at a time. It’s also one of those games that you can bring out for people who, for some reason, don’t want to commit to a 3d6 hour long game of Republic of Rome and keeps you from having to endure Cards Against Fucking Humanity or suchlike.

There are two expansions to the core game which add more of all variety of the cards, but unless you’re playing this enough that you’re getting a lot of repeats they don’t add a ton. There’s also a new standalone game called Mysterium Park which appears to be a streamlined version of the same mechanics, but it is set at a fairground in the 1950s rather than having the gothic Victorian feel of the original so less appealing to me personally (he says, putting in a Bauhaus CD and staring moodily into the night. Kids, ask your parents about Bauhaus). There are digital versions as well (iOS, Google Play and Steam) that support solo or multiplayer so you can get your spiritualism on, even in our plague-ridden social isolation hellworld. No shortage of ways to keep the spoopy season going! Woooooo-ooooo-oooo!