What up, Scummers. Following on from the release of Goonhammer’s own lovingly crafted Lost Zone supplement for Necromunda, today we have a showcase of low-rent idiots who fit right in to the Lost Zone’s “I can barely afford lasgun ammo” vibe.

Hey, you’re not one of the regular Necromunday guys!

Very true. I also have nowhere near the same level of expertise in the game as they do, but for the purposes of this post that doesn’t matter. I’m just here to show off tiny people on bases.

Why’d you start this project?

This is a ragtag bunch of individual underhivers banding together and trying to stay alive. Think Necromunda via Fallout 4. That meant avoiding the homogenous look of a House gang, and going for mostly earthy tones with bright pops of colour here and there. I really liked the vibe of the original Necromunda, with motley crews scraping out a living, rather than a uniformed militia, so that’s what I was trying to evoke.

How’d you go about doing this project?

I tried to convey the whole ragtag theme by combining some of the OG Necromunda minis with some sculpts from Hasslefree Miniatures. I fully appreciate that I have thus deprived myself of the gut-spasming hilarity of Eschers running through urban rubble in heels, but it’s for the good of the mission. 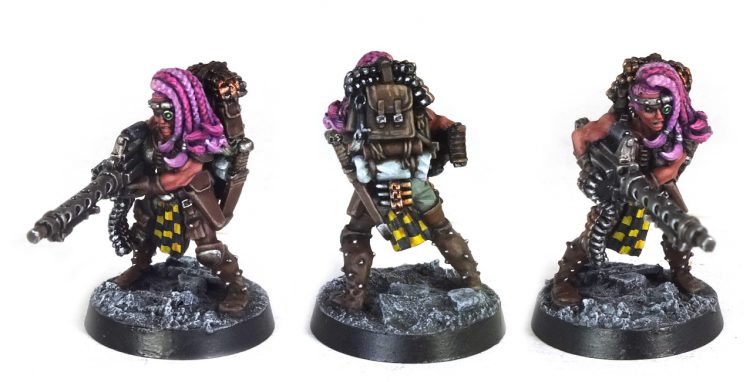 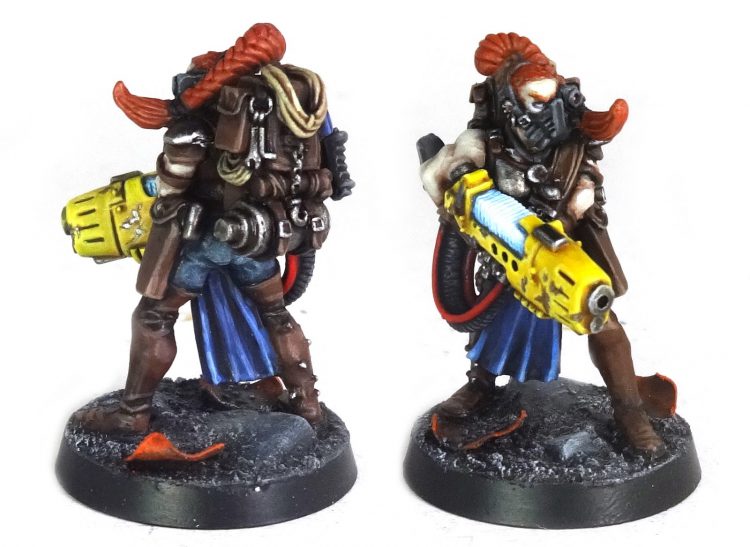 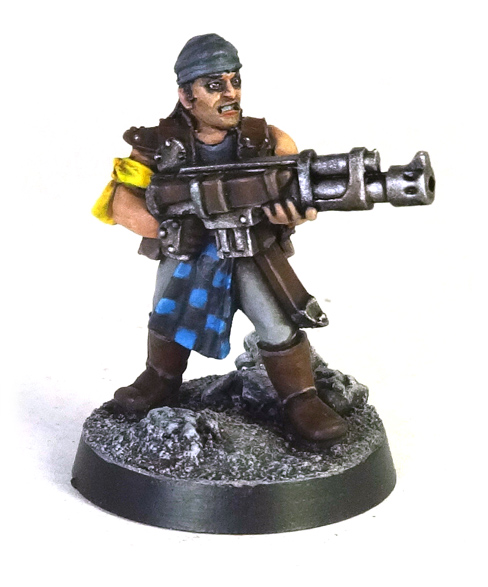 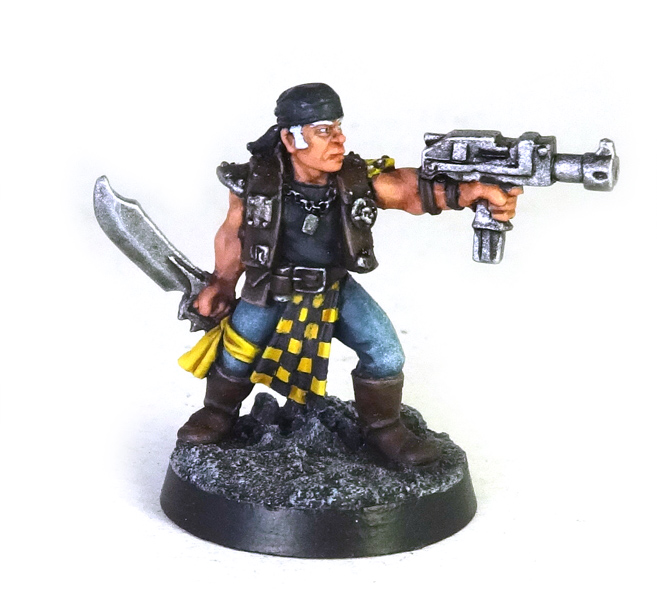 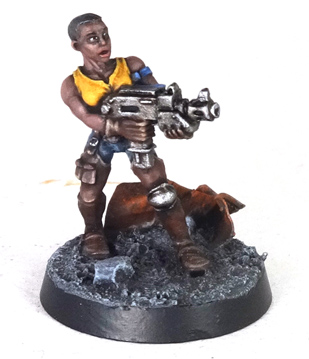 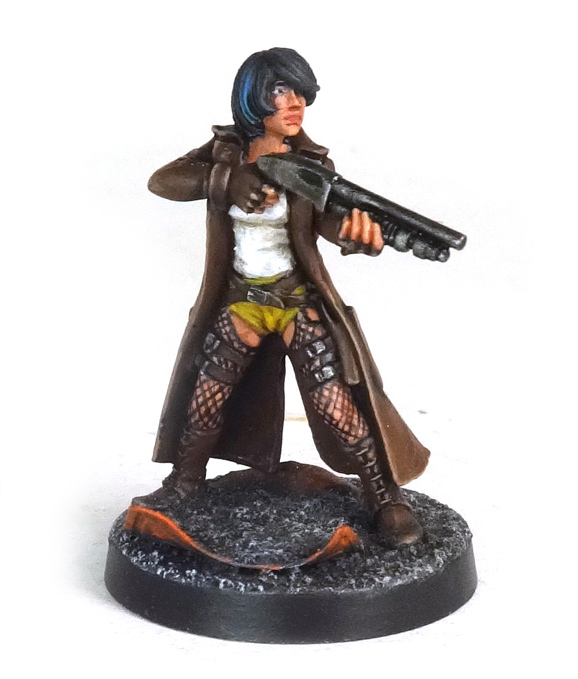 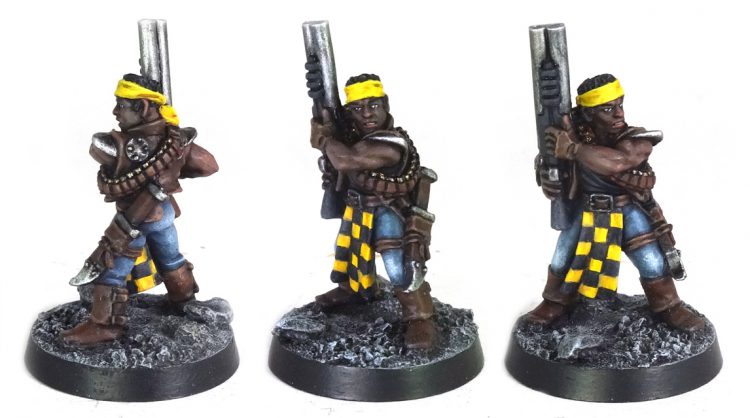 Can we get a little bit of backstory for the Stitchers?

The short version is that they were a bunch of indentured workers in a textile factory. A life of grinding 12-hour shifts, zero rest days, and a non-existent retirement policy resulted in employee retention issues. They started plotting exploring alternate employment. Waiting until a shift change so they could bring maximum numbers to bear, they swamped the guards, stole their guns, and fled to the Underhive.

They built a hideout, lost it to the hazardous environment, built it again, then started playing the local gangs off against each other before moving in once both sides were weak. Keen to impress their significantly tougher neighbours, they mark their territory with the severed heads of their defeated foes… after stitching the cadavers’ eyes and mouths shut. A quaint wee nod to their origins, innit. This was their rustically charming way of announcing they had become powerful enough to defend their newly-gained territory. Thus, the stage was set for the first proper gang war.

If like me you can’t get enough narrative into your wargames, this post over on the Beard Bunker goes through the gang’s complete story, as well as its members. 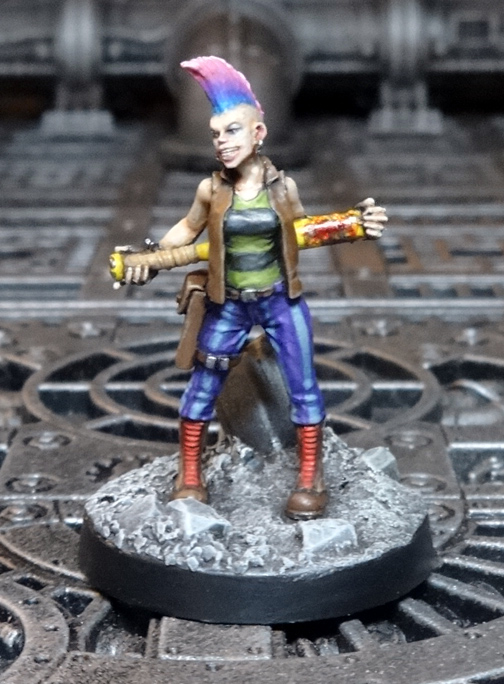 If they don’t belong to any one House, how does that work in the rules?

Vibe-wise I would’ve said they count as Orlocks, but unlike the oldhammer Orlocks, modern ones don’t get lasguns in their gang list. To keep things WYSIWYG I’ve had to count the gang as House Escher. Square peg, meet round hole. It isn’t ideal, particularly since all the toxin stuff isn’t hugely thematic for them, but we’ll see if my campaign arbitrator goes easy on me in the next campaign and lets me be less strict with the equipment list. Time will tell.

Have you had a chance to use these idiots in battle yet?

Yes! In the Before Times we had a few solid campaign weekends, and they just about held their own. Admittedly things were getting tricky as the other gangs started unlocking seriously swank guns, but I had plans on an Ambot to help even the odds some. Hopefully, in the After Times (i.e. when our group have finally got their second vaccinations) we’ll cast campaign resurrect. And this time, maybe I won’t roll an ammo check every time Tinker’s plasma gun fires.

What I’m particularly excited for is that our arbitrator’s checked out the Lost Zone supplement and intends to use that for our next campaign, and I’m hugely stoked to use these guys in what is, let’s be honest, their natural milieu: being under-equipped murder hobos.