So Close to Something Great: Using Dark Souls Miniatures in Your 5e RPG! 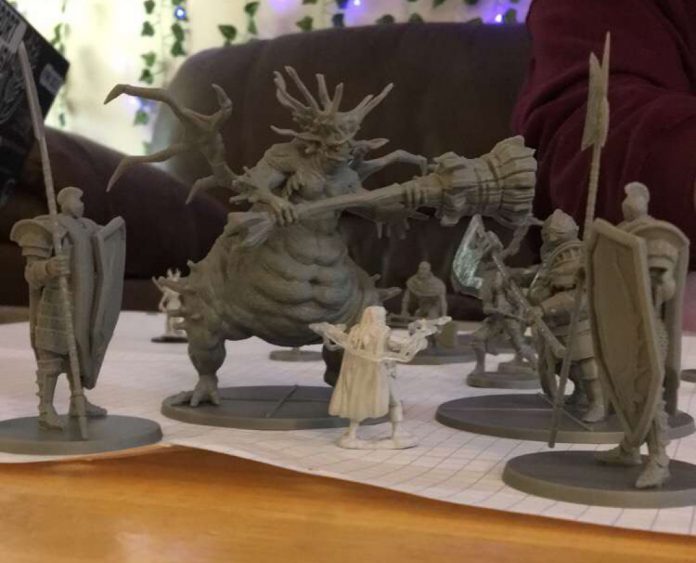 We have previously covered the Dark Souls RPG and showed off some painting guides for the Dark Souls Miniatures. As the minis are advertised as “5e Compatible”, Luke is here to share his experiences incorporating them into a game of Dungeons & Dragons.

As someone who narrowly missed being the RPG equivalent of a pandemic baby, I admit to having little experience with physical miniatures as virtual tabletops have become necessary.

Still, after staring longingly at enough displays in various game stores (before inevitably choosing another dice set instead), I can confidently say the new miniatures from Steamforged Games for the Dark Souls RPG have a distinct charm to them.

The Sentinel figures are a great example of the strengths of these miniatures.

With massive shoulders and tiny little heads, the Sentinels look like Kingpin from Into the Spider-verse. At the same time, you can see the texture of their chainmail and even the filigree on certain bits of armor. This juxtaposition of style and detail makes the minis very fun to look at even in their original grey form; I’m very excited to make a project out of painting all of them soon.

Another visual standout is the Asylum Demon. It strikes an imposing figure with its chunky build, spiky tail and weird head antennae things. The players who helped me test these guys out kept running from him despite other monsters being more dangerous.

However, I did identify a major concern with the figures when looking past aesthetics.

The boxes for both of these figures list them as having 25 millimeter bases, which is the current standard for D&D miniatures. I simply have to disagree with this measurement. These two pieces of plastic are not the same size.

Both the Alonne Knights and the Hollow Soldiers are labeled as Medium on their stat cards, but the Soldiers are notably larger than the Knights. This doesn’t matter much for the character itself, but the base needs to be sized correctly for gameplay since this affects movement, anything with an area of effect or even simply understanding where characters are in relation to each other.

At first I wondered if the Hollow Soldiers were intended to be Large creatures and a series of editing mistakes caused the confusion, but after measuring it out, the base isn’t quite big enough for what I’d expect from a Large creature (approximately four times the base size of a Medium creature).

Another problem, likely less widespread, was that the Boreal Outrider Knight I received was missing its right arm. To be fair, I initially assumed it just didn’t have one because that crouched pose is somehow more impressive without an arm supporting it.

If I had purchased these figures, I probably would’ve reached out for some kind of replacement or something but considering this was a review copy I decided it wasn’t that big of a deal.

Overall, I could stare at the droopy, strangely happy looking helmet of the Winged Knight forever and these are aesthetically fantastic, but the miniatures will suffer during physical gameplay.

While I don’t have a copy of the RPG, Dark Souls uses a D&D 5e based system. This is my “area of expertise” when it comes to RPGs (despite my love for so many other systems). Perhaps my favorite thing about the figures is the fact that they come with stat blocks so they’re ready to be included in a game even if you don’t have a Dark Souls source book.

In order to get a feeling of how good these stat blocks were, we used standard 5th edition rules. This meant I decided to ignore the Boreal Outrider Knight’s ability to spend “Position” (Hit Points) in order to increase damage or movement. It was giving the players enough trouble with no additional abilities so this made little difference in the end.

It also appears that Dark Souls uses the “Bloodied” condition. This rule was removed from 5th edition but is easy to work back in since it basically means “a creature has fewer than half of its HP”, sometimes unlocking new abilities.

The other big adjustment I had to make was that we ended up not using actual measurement or movement since the scale of the miniatures was such an issue. Rather, we moved figures around enough to know who was dealing with who and approximately how many creatures could be affected in an area but with some fudged movement and dips into “theater of the mind” style play.

In the interest of trying out every single monster in one swoop, I had three friends make level 20 characters to fight the whole hoard. The Player Character lineup featured a halfling rogue, an aarakocra paladin and a wood elf monk.

Perhaps this was not a well-balanced fight, but the players did prevail, likely due to my infamously bad rolls.

I’ll start with everything I liked about these stats with just a few things each creature can do.

They’re pretty diverse with different attacks and saves to test players with. They also have good diversity in immunities, resistances and even vulnerabilities, creating sort of a puzzle for the players to figure out the most ideal fighting tactics.

The Alonne Knights/Captain are all mostly the same but that’s what I want from a creature that’s meant to be used in large groups of duplicates. They also get bonuses from proximity to other Alonne Knights and a fun “Lunge” ability which is like the barbarian’s Reckless Attack feature.

The Sentinels are also pretty straightforward in combat but their ability to appear as lifeless statues opens up possibilities in campaign or dungeon style play.

Again, I’m enamored with the Asylum Demon. The “Ground Pound” conical attack followed by an absolutely devastating “Hammer Drive” which causes a long-term HP bleed is just perfect to unnerve the party despite having very low HP itself at a Challenge Rating 5.

The Hollow Soldiers have a few options for relatively boring hits on PCs, but the “Keeps Crawling On” ability to pop back up after being downed is perfect for that good zombie energy.

The Ironclad Soldier is also somewhat basic at first glance, but the ability to do decent damage at range and boosted magical damage after being Bloodied make it good company alongside any of the other creatures.

The Winged Knight does not have proper wings and does not fly, just to clear that up. It can make opportunity attacks when creatures enter its radius, though, so that makes up for it, I suppose.

That Boreal Outrider Knight… wow. It has fully earned the CR 20 rating and was the sole reason my players nearly didn’t survive the fight despite their high level.

Even somewhat nerfed by the conversion to standard 5e rules, this is an absolute beast. Advantage on saves against magic, truesight to 120 ft, four separate powerful attacks (up to seven once bloodied), a walking and flying speed of 60 ft… Do I need to go on? It’s kind of terrifying.

My big critique is probably the sheer number of attacks it gets. When you follow a 12d8 fire damage “Flame Thrust” with a 4d6+8 and 6d8 damage “Twirl” and still have two more attacks to burn through, it starts to get questionable for balance.

So, overall: great! Lots of great stuff to work into future campaigns, though perhaps the Boreal Outrider should be reserved for the Big Bad.

One pervasive issue could easily be solved with the help of a copyeditor: throughout the cards, things were plural where they should’ve been singular, punctuation and capitalization weren’t quite right and some phrasing was a bit confusing.

Probably the most notable example is on the Alonne Bow Knight sheet. There’s a listed “Multiple attack” option with text that reads: “The Alonne knight makes one ranged attack with its Alonne Greatbow.. [sic]”

So… that’s not multiple attacks. This line should not be there at all.

None of this is major enough to create any issues during play, so I won’t harp on it too much, but I wish some more care was taken in looking over the final drafts.

In the end, these made for a great evening of D&D and will fit right in for future campaigns. I may check out the Dark Souls system, too, for some more dark fantasy adventures.

If you played the video games, I absolutely think you’ll enjoy bringing these monsters to your tabletop.