I recently finished a piece of deathworld forest terrain and felt it would be cool to show off the project. I built this using a tutorial that noted goon savant BuffaloChicken put together for the SomethingAwful forums a short while ago. A lot of people have shit on the deathworld forest terrain, but I think it’s actually very workable, it just needs some basing work.

As a base for this project, I got some 12″x12″ self-adhesive vinyl floor tiles from BC that he had left over from his project. These are a little thinner than what he used, but that worked well for me because it made them easy to cut with a big pair of kitchen scissors. I live in an apartment in the city, so sanding the edges was also going to be a no-go for me. The underside of these bad boys is really sticky when you peel off the tape, and that makes it easy to adhere things like plasticard and flock/grit to it, especially if you plan to seal it later. 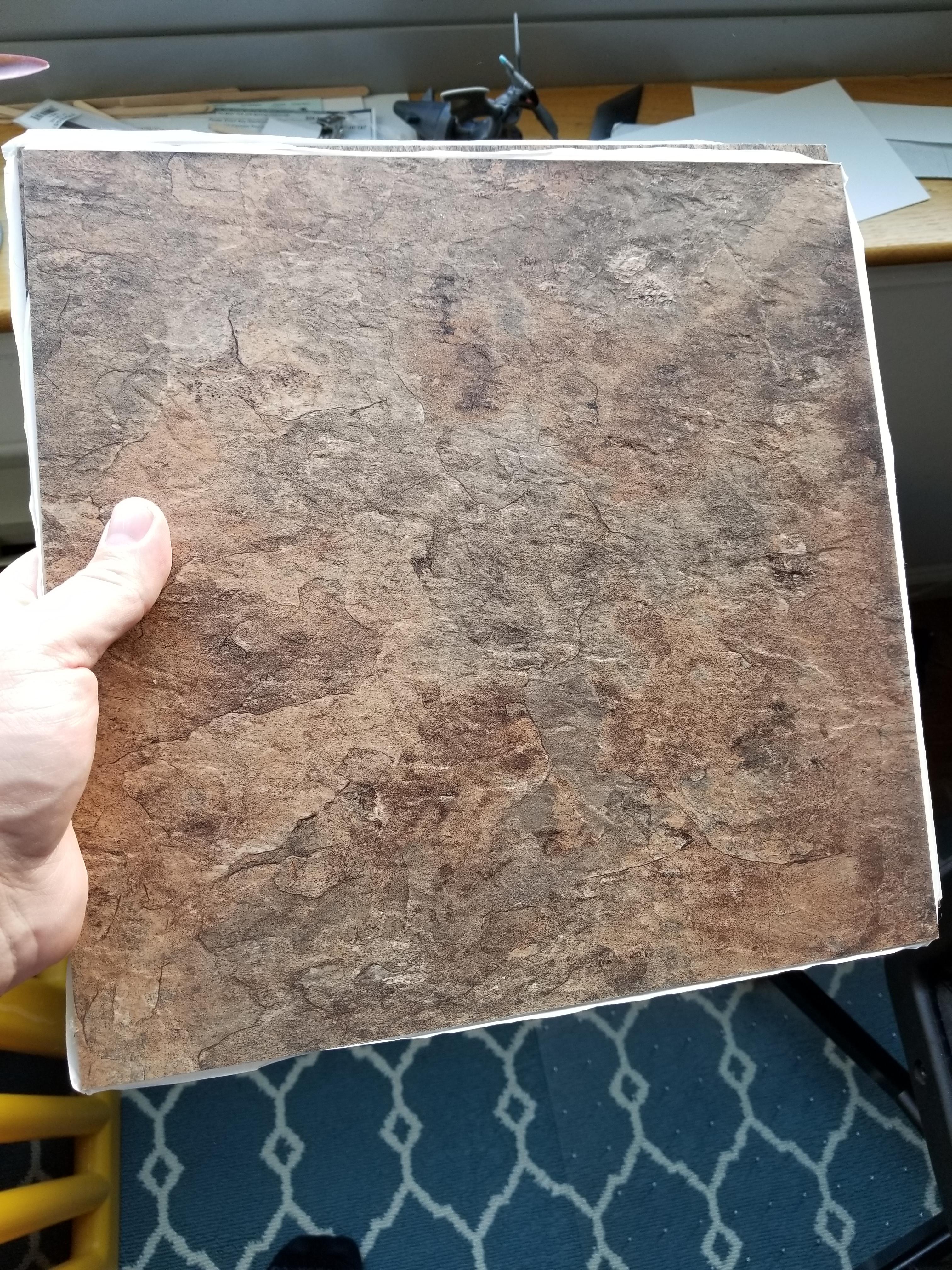 Whew, that’s quite the list. The good news is that almost all of it is multi-use, so I ended up using the cement and plants on other projects (more on those soon).

Anyways, the first step was principal construction. I started by cutting out a loose shape I needed from the tile and rounding it off as best I could. Here’s where I would absolutely recommend sanding the edges if you can, but if you can’t, it’s not the end of the world. Once that was done I plopped down the major tree/ruins structure, and surrounded it with skulls, bracken, and heavy basing grit. I wove a vine up through it as well to give it more depth. In a move I learned from BC, I also added some foil mounds. This both helps keep the shape looking less flat and more organic, and is a great way to provide a way to stick other plants on later. 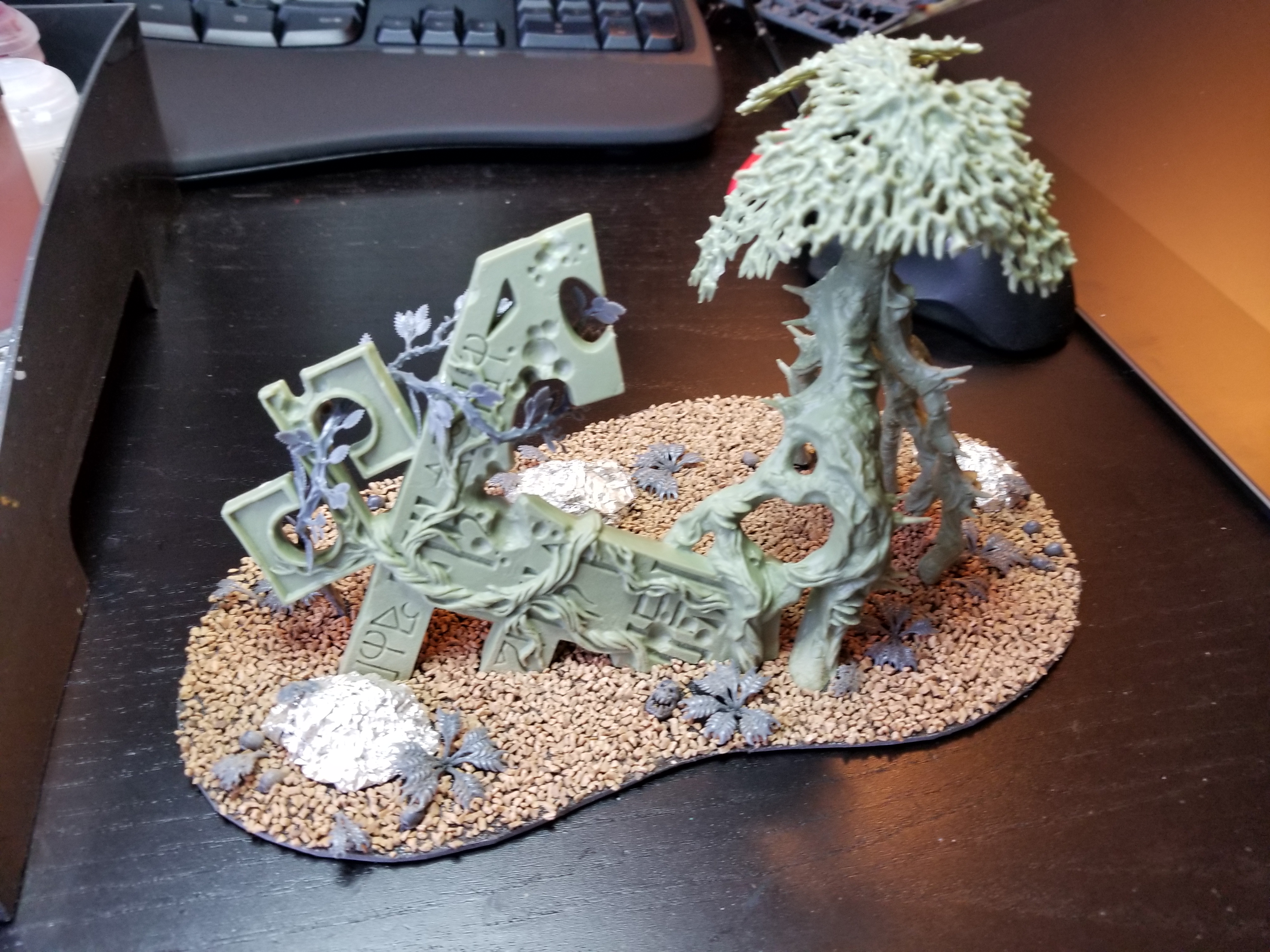 At this point I hadn’t used much glue yet (I superglued the ruins, bracken, and tree to the base to make sure they were on good), but I wanted to add a second layer of finer grit to give things a more natural feel, so I coated the foil with elmer’s glue, hit some key spots around the base, and added a pass of finer basing grit to the thing. Once that was dry, I hit the whole base with scenic cement to make sure it would all hold–primer is OK for this, but you don’t want pieces of grit chipping off every time you handle the piece.

Once that was dry, it was time to prime. Black, obviously. Then came painting. I started by covering the tree and base with a layer of Rhinox hide, then highlighted with Mournfang Brown. The ruins got Karak Stone -> Rakarth Flesh -> Reaper Polished Bone, and the vines/plants got Castellan Green -> Death World Forest -> Straken Green. I used a mix of browns and greens on the basing. The goal there was just to get a good mix of color. For the treetops, I did an extra layer of Ogryn Camo. 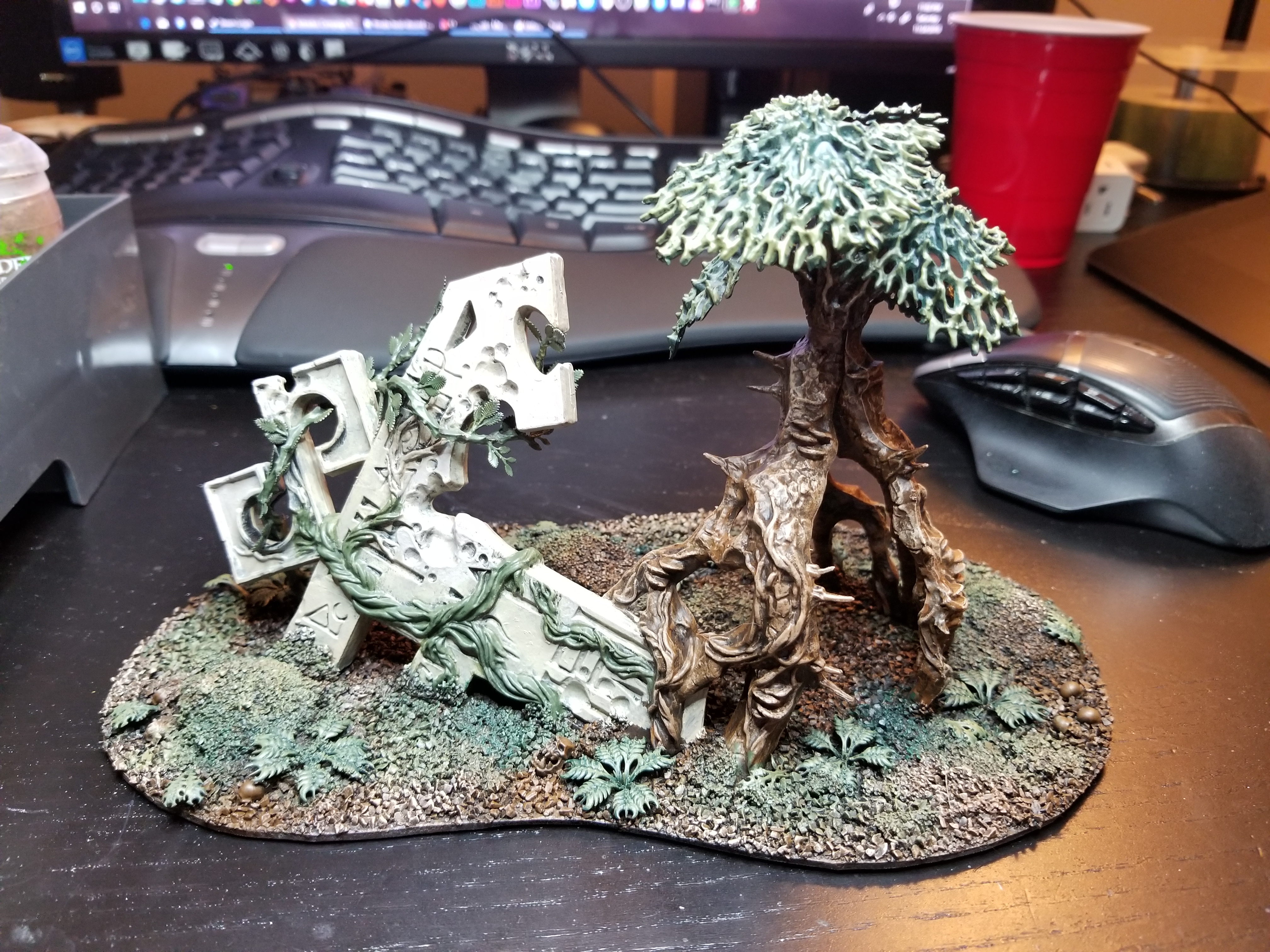 For final touches, I picked out the skulls, painted the tree barbs red, and painted the little mushrooms. For those I did Rakarth flesh on the undersides with Xereus Purple on top and white dots. Following another BC classic, I then punched holes in the foil (I used a pin vise for this), then cut off sections of the aquarium plants, covered the ends in glue, and inserted them into the holes. This gave the final piece a bit more fleshing out and some interesting fauna diversity, and really makes the piece pop. 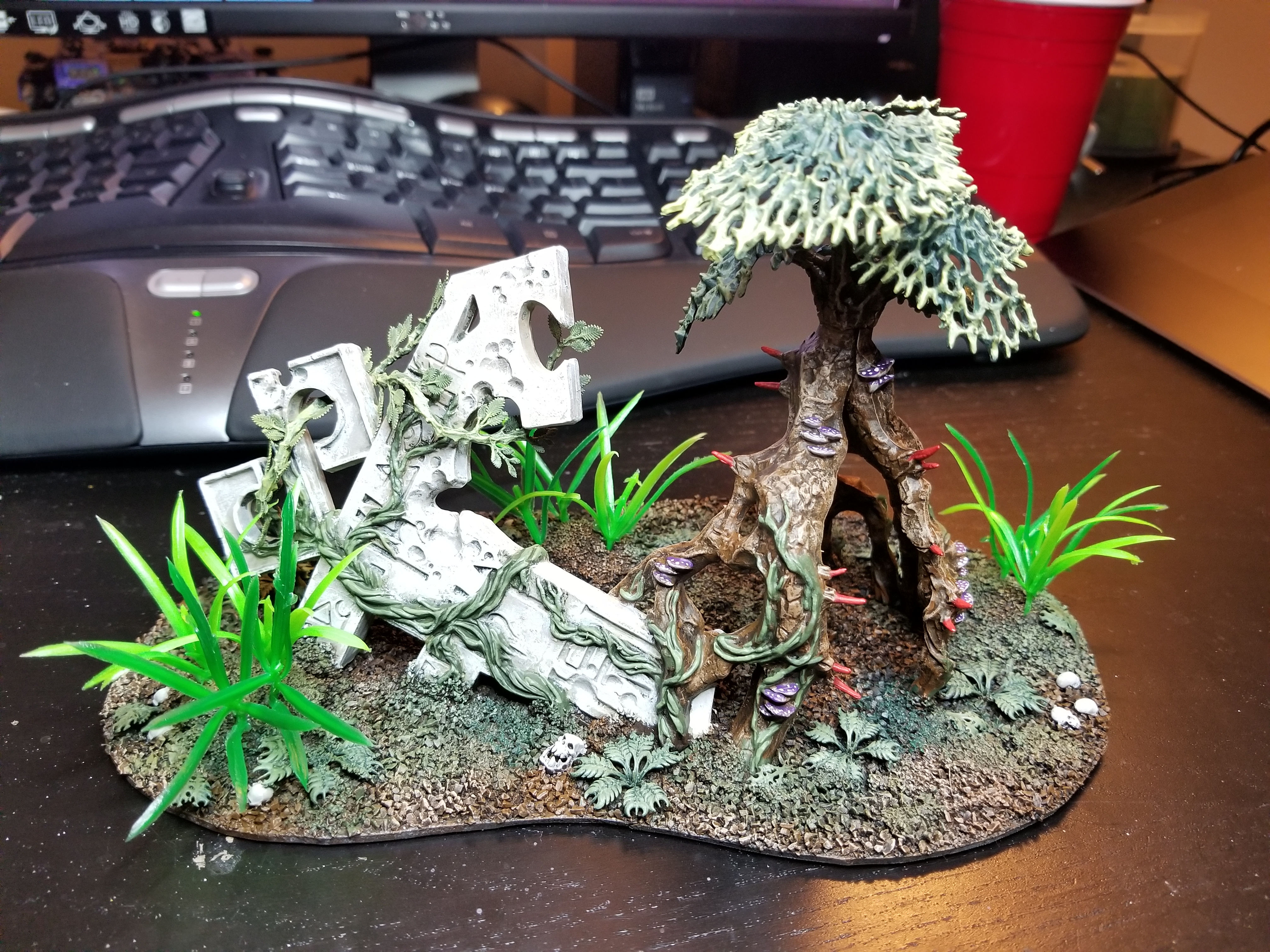 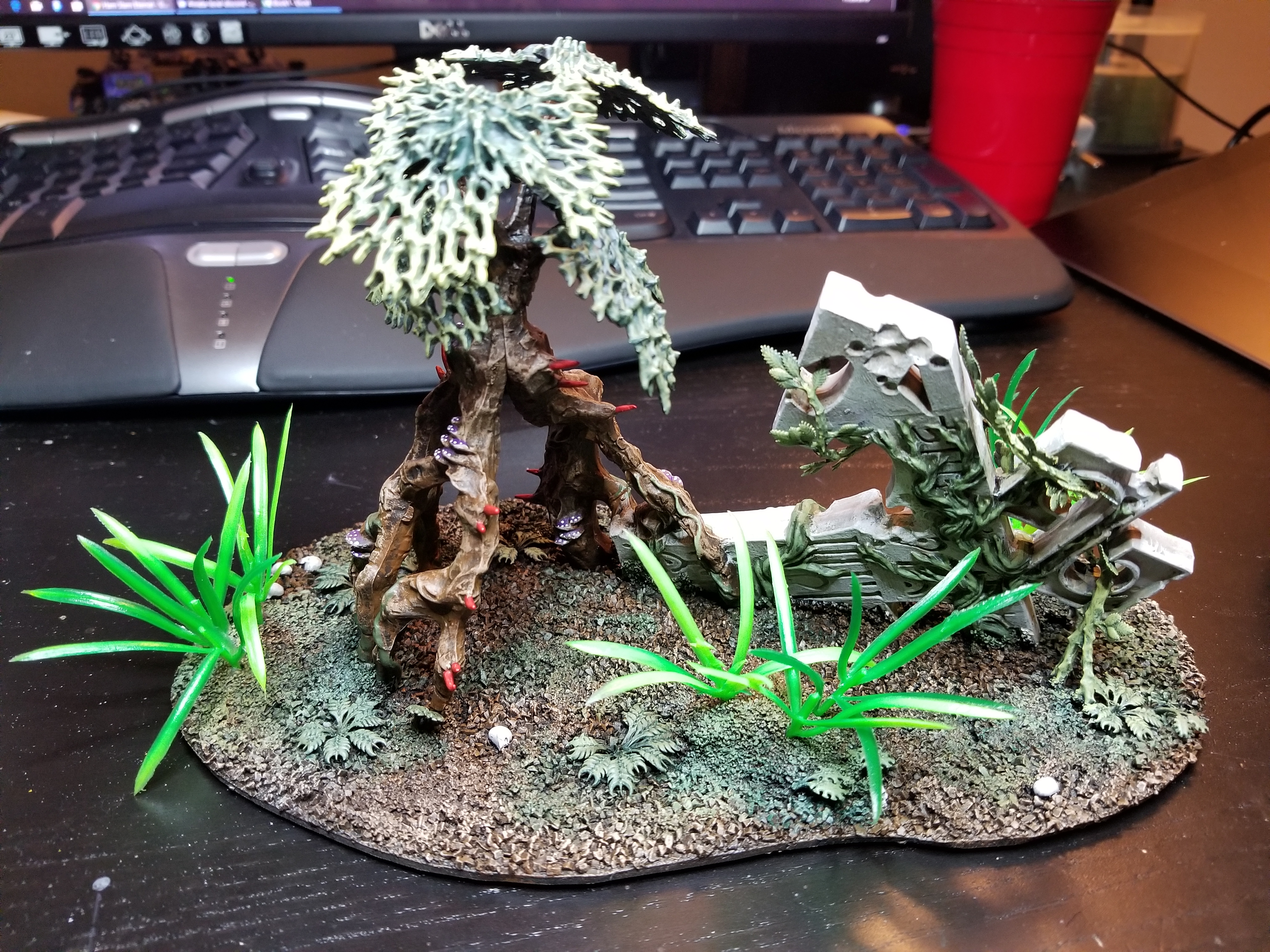 Hopefully you’ll find this helpful for building your own pieces. I’d also strongly recommend BC’s guide, and major props to him for his help on this!