Welcome, Sports Fans and burgeoning coaches, to the Goonhammer Blood Bowl Combine! For those of you who are new to Blood Bowl, or maybe those returning after a long hiatus, we’ve assembled a playbook here that will hopefully get you onto the field and winning, drawing, or at least losing in style! Although Blood Bowl is technically about literal fantasy football, the game itself is fairly strategic and is best thought of as a style of skirmish game with a sports theme. Passing, blocking, scoring, stalling and fouling are all part of your toolkits, but how, when, and where you should do these things can be the difference between great success and spectacular failure. Let’s begin with the most important topic: Risk Management.

Blood Bowl is a game of risk management. If there’s one takeaway you get from this article, let it be that if you’re going to win Blood Bowl games, you need to understand risk. If an action involves a dice roll, then it can fail, and if it fails, it means a Turnover (there are rolls that are risk-free, but they’re relatively rare). Turnovers immediately end your turn, and allow your opponent to start theirs, with your players probably out of position.

One of the most common mistakes rookie coaches make is trying to pick up the ball, dodge a tackle zone, or even throw a block with their first action on a turn. Then they roll a 1 or a skull, fail the action, watch their favorite player eat dirt, and stand there scratching their head wondering why their opponent gets to do so much while they’re not accomplishing anything. Meanwhile, the rest of their team is out of position and not helping with the play. This doesn’t have to be you.

Nearly every time you roll a die, you are potentially throwing away your turn. Even with a re-roll, a single d6 looking for a 2+ has a 1-in-36 chance – about 2.8% – of causing a turnover. That may not sound like much, but you’re going to roll a lot of dice. Over the course of 16 turns, the chance that you’ll fail at least a handful of rolls will quickly change from a mere possibility to a near certainty.

Not only can this result in a turnover, but a solid number of the actions you’ll have to roll for – like blocks, dodges, and rushes – have the potential of causing injury to your player on a bad roll. And while you can’t remove the risk that you’ll re-roll a skull into a skull and lose your turn, you can play in a way that minimizes the potential for things to go south when you do.

Start your turn with actions that don’t require any rolling. If you’re on offense, set up a cage, or move some players into position to mark defenders and block them aside or just keep them out of the play. Set up a screen to stop your opponent from walking to where the ball is, then save picking it up for later in the turn. On defense, move to plug holes in your formation and mark players with poor Agility scores so they have a hard time getting away from you. Avoid one-die blocks unless you have Block and a reliable source of re-rolls, and even then think twice.

A good way to think about block dice facings is relating them to the facings on a d6:

Learn to spot situations where you don’t need to roll dice, and act accordingly. Sure, you might be able to make a really sick dodge into a double rush that might win you the game, but that’s also more points of failure that you may not even need to risk, especially if you’ve got a couple linemen you can throw in between your ball carrier and the other team to keep them safe.

We’ve put together a helpful sequential list for coaches to use when planning their turns: 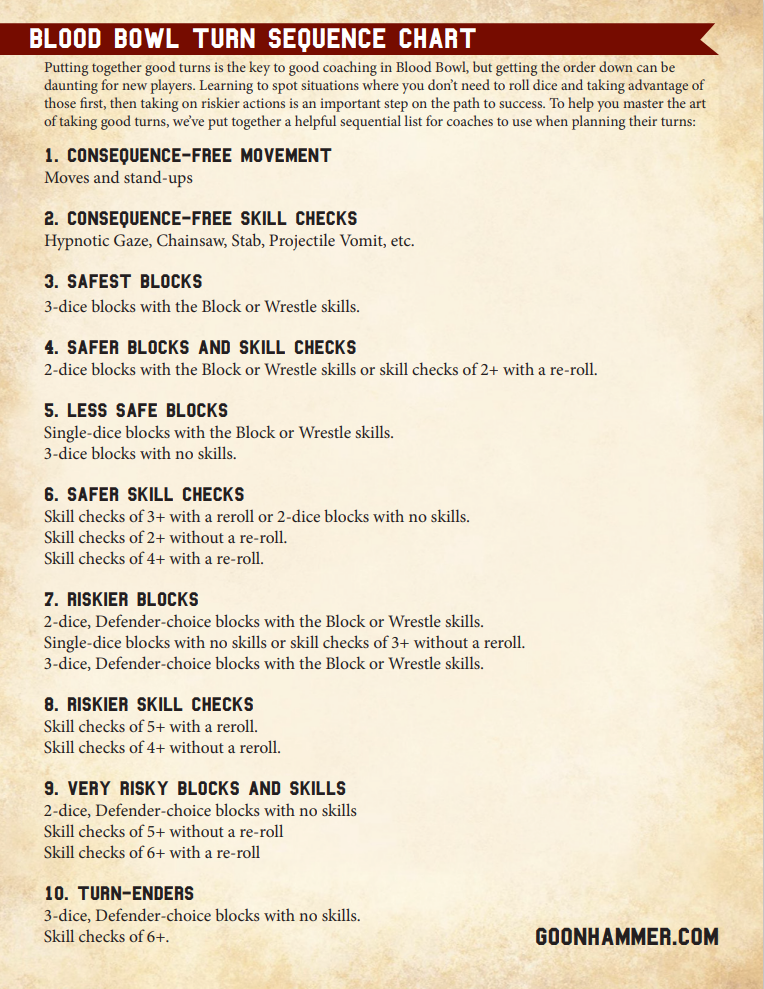 Want to download the chart? You can find it here:

Also I’d like to give a quick shoutout to Primaris Kevin for helping me put together this chart. He’s also done a really good article about probability in Blood Bowl, and you all should go check it out after reading this one. One quick note: When I say “consequence-free skill checks” in #2 up there, the consequence I’m referring to is a Turnover. I realize that some of the listed skills can hurt the player attempting them, but they won’t prematurely end your turn.

Using this list in your games will not guarantee that you do not suffer any turnovers. After Numbers 1 & 2, each action involves some bit of risk. However, going down the list will set you up for the best turn possible. Some of this stuff was honestly a little surprising to me. Like, I didn’t know that a 5+ skill check with a reroll is (slightly) more likely to be successful than a 4+ without a reroll. Thinking about it, it’s obvious, sure, but if you were to ask me which one to go for first before I started writing this piece, I would have gone with the 4+! It’s also surprising to see how impactful Block and Wrestle are. With either of those skills, you’re still more likely to come out of a block okay than end up with your player on their ass.

Thanks for reading, Sports Fans! Next time on the Goonhammer Blood Bowl Combine: What team to pick, and how to build your roster! We’re excited to bring you more Blood Bowl coverage, and we’ll see you on the pitch!