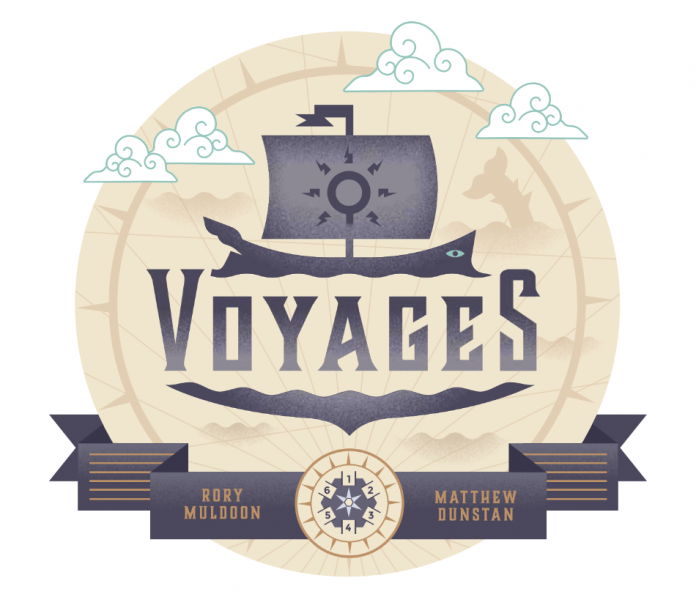 “Some years ago—never mind how long precisely—having little or no money in my purse, and nothing particular to interest me on shore, I thought I would sail about a little and see the watery part of the world.”
– Herman Melville, “Moby-Dick or, the Whale”

Even the grandest voyages have modest beginnings. In the case of designers Matthew Dunstan and Rory Muldoon, it was the roll-and-write game Voyages for their new print-and-play company, Postmark Games. The pitch: “A single sheet, print-at-home board game.” The price: five dollars. Twelve days later Voyages raised 1317040% times what one copy of the game would cost. What a voyage, indeed.

And what a game. The little single sheet-that-could benefitted from a perfect storm of savvy and circumstance. Voyages was ready to ship because it wasn’t being shipped—game files were shared on Dropbox a fortnight after it funded, well before Christmas. It’s not nothing to find something ready to go so fast and fun right out of the box (because there was no box).

Market forces were a factor too. It was clear during Pandemic Year Two that remote boardgaming was a permanent feature, not a hiccuping bug. So demand for good remote-play games remained high. And with Voyages, the level-of-entry is lower than the low tide amid the sandiest shoals. The game is the same cost as a Salted Caramel Mocha. It’s a print-and-play in its purest form – no arts and crafts and scissors and paste-ups that make you feel like you’re prototyping. Player counts are 1-100. The solo rules play exactly like multiplayer, with no substitutions (a white whale of sorts).

It’s difficult to justify not hosting a Voyages game night. The game covers every angle of how someone might want to play it: paper or plastic. Low-to-no budget. Solo, multiplayer, maxi-player. Digital or analog. And fifty shades of remote.

This warm fuzzy print-and-play phenom story would be a tempest in a teapot if the game itself wasn’t worth its salt. But as it happens Voyages is revelatory; a simple, shipshape design that is oceans of invention, variety, and “just one more game” addictive fun.

In Voyages you navigate the ocean map in order to collect the most gold. There is a fleet of different ways to acquire it. Plotting a course to rich islands is the most straightforward option. Maybe you prefer wanderlust: scour the four edges of the map and hit seven different checkpoints to earn your gold exponentially. Or excel at sea trade by collecting and selling the most valuable cargo. Perhaps you’ll recruit sailors brave enough to help you defeat the fearsome, monstrous sea boss for fortune and glory. While there’s no way to pursue all these gold quests in one game, you still want to dip into as many different scoring opportunities as you can for a competitive score.

As the captain of the ship, you are the captain of your own fate. You decide which adventures to go on, which chances to take, and when to cut bait. And while you are the main character in this story, you’re still at the whims of the fickle ocean – in the form of dice rolls.

“Ah! how they still strove through that infinite blueness to seek out the thing that might destroy them!”
– Herman Melville, “Moby-Dick or, the Whale”

Three six-sided dice are rolled each round, and the results are used by all players. Turns are taken simultaneously as you chart your course and tick off boxes all over your player sheet. Each round you choose two dice for navigating the map and one for your ship. One die determines direction (based on the D6 compass rose).

A second die determines your movement; ships must move (based on your chosen directional die) the die’s full amount in a straight line, which you track on your map. Spend the remaining unused die on Duties, a mini-bingo card of 1-6 die values you cross off that trigger bonuses when X’ing out entire rows or columns.

Just as no man is an island, no ship is seaworthy without an able crew. You start with six Sailors, which mitigate dice rolls by letting you pip a die up or down in value. Recruit more Sailors by landing on map spaces with the anchor symbol. Relics symbols (gold chalices) you reach on the map allow you to upgrade one of your existing Sailors to Heroic. Heroic Sailors are more powerful than a pip; they let you make a die wild (any value 1-6).

Voyages is a pleasure to play but isn’t a pleasure cruise; you work for a living. When you land on any one of four different goods symbols on the map, you store that good in its corresponding Cargo space. A fifth good (barrels) is wild and can be stored as any type. Goods by themselves have some value but are far more valuable if you collect them in bulk and in sets, then travel to designated islands to sell them.

These seafaring, gold-making quests introduce another scoring possibility in the form of Legendary Stars. There are multiple ways to gain stars: sell at least three of the same good; fill the longest numbered row on your Duties chart; recruit six more sailors above the six you start with; defeat the Dread monster; travel to the edge of the world on the map to the star-labeled ocean space.

Legendary Stars also trigger the endgame. When a player acquires their third star, one more round is played (aka one last dice roll to navigate and allocate). Then final scores are tallied based the six different scoring conditions.

“There is, one knows not what sweet mystery about this sea, whose gently awful stirrings seem to speak of some hidden soul beneath…” – Herman Melville, “Moby-Dick or, the Whale”

Voyages is terrific. It’s simple but not simplistic. For a one-page, three dice roll-and-write, Voyages contains multitudes under the surface as befits its ocean setting.

One of many reasons why Voyages works so well is that it not only delivers winningly on the promise of its premise, but it’s so strongly thematic while doing it. So few roll and writes feel like the thing they say they are doing. Instead many are glorified bingo cards or soulless spread sheets dressed up with throw pillows to seem like something else. Most don’t even try, just showing you where and how to draw the X’s and O’s with varying degrees of complexity (or fiddliness).

But in Voyages, you voyage. You’re carried on the strong current of the game’s narrative, thematic flow and you are immersed. Like an ornate figurehead on the prow of a galleon, the map makes an outstanding first impression on the table and everything unspools intuitively from it. Including a willing suspension of disbelief and your fired-up imagination. You’re on a journey. A race. Chart your course. Make unexpected stops and have unexpected encounters. When you go off course sailors can steer you back. When you don’t have enough sailors, you’re a ghost ship relying on dead reckoning and may be dead in the water. And at game’s end you have an archival record of your journey, no matter how successful or harrowing it was.

A magic trick that Voyages flawlessly pulls off is granting players full agency and free will – in a dice game. You’re still the captain. You choose. Go where you want and do what you want and live or die with the consequences of your actions and decisions (or inaction and indecision).

Another envious characteristic is that Postmark Games is playing the long game. The Voyages map you get upon purchase isn’t merely a map – it’s a template. Because Voyages is introducing a new game system. With the one-time purchase price you gain access to Map #1 and all future Voyages content that will ever be released. It’s a lifetime subscription.

Already there are two new maps that rework the base game and mod and tweak and remix “modules” on the debut Voyages map. Such as impassable reefs and ice floes. Or enemy ships that introduce line of sight and combat rules. Or swapping the cargo set collection with sea creatures (which can deal mega damage to your ship).

In addition, while three official Voyages maps have been released by Postmark Games in just under two months, there are already twice as many community maps created by users with plot twists like whirlpool currents, treasure chests, and even dragons. Postmark Games has a robust and spirited Discord community where members champion and celebrate new ideas for maps and features. Essentially, Postmark views Voyages as open source software that anyone can use, share, hack, and fanfic.

Voyages is a game where you take a unique journey. It’s also a game system where a celebratory community of print-and-players and roll-and-writers (and you too) can choose to embark on another journey. Into a sea of new possibilities and to the edges of an ever-expanding Voyages universe – one that may not necessarily be relegated to oceans. With a single sheet of paper, (your) three dice, and a revolutionary way of doing things, Voyages has seemingly created an infinity of new worlds to discover.

“The untold want by life and land ne’er granted,
Now voyager sail thou forth to seek and find.”
– Walt Whitman, “The Untold Want”