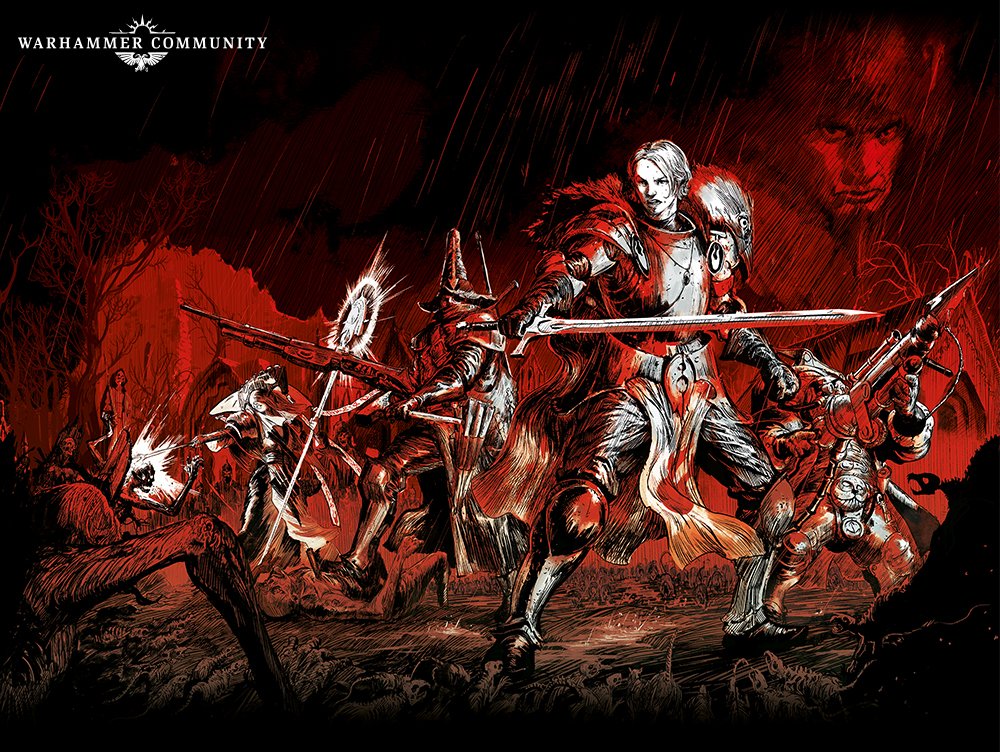 It’s Saturday, which means it’s pre-order day – and this week it’s a very special one as Warhammer Quest: Cursed City is released! Here at Goonhammer we were lucky enough to get a review copy of the game sent our way, and over the next half-hour or so we’ll be rolling out a few different articles. Today we have this unboxing and a first look at the rules (including the AoS warscrolls packed in with the box). We’ll follow up in a few days’ time with a deeper look at the rules once our authors have had a chance for a full run through of the game, a roundtable that mostly consists of our authors raving about how awesome all the models in here are, and a little later on some painting articles for the heroes and hostiles in the box.

Speaking of those, let’s dive into the box and see what’s inside!

If you’ve been following Warhammer Community over the last few weeks, you’ll have seen the amazing models included in this box. It’s absolutely jammed full of characterful sculpts for both the heroes and hostiles, including a bunch of great indicators for what the new Soulblight Gravelords are going to look like. There’s 6 sprues overall in the box; two large identical ones for the rank and file hostiles and objective markers, another large one for the more unusual hostiles, an individual sprue for Radukar the Wolf (the definitely-not-a-vampire-ogre big boss) and then two sprues of the player heroes. As will be no surprise for modern Games Workshop plastics these are absolutely packed with models, and being in the “board game” rather than “wargame” bucket means that there’s a minimum of optional bitz and a maximum of stuff you’re gonna get to build. They’re also all designed to push-fit, meaning no glue required; while many veteran gamers will be wanting to build and paint these to a high standard regardless, it’s nice for the more board game-oriented crowd to have the option to just get them constructed and on the table with a minimum of fuss. 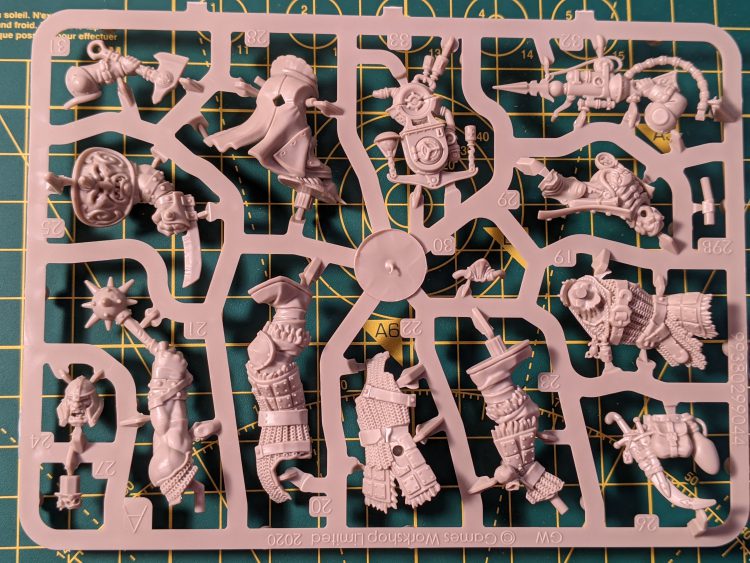 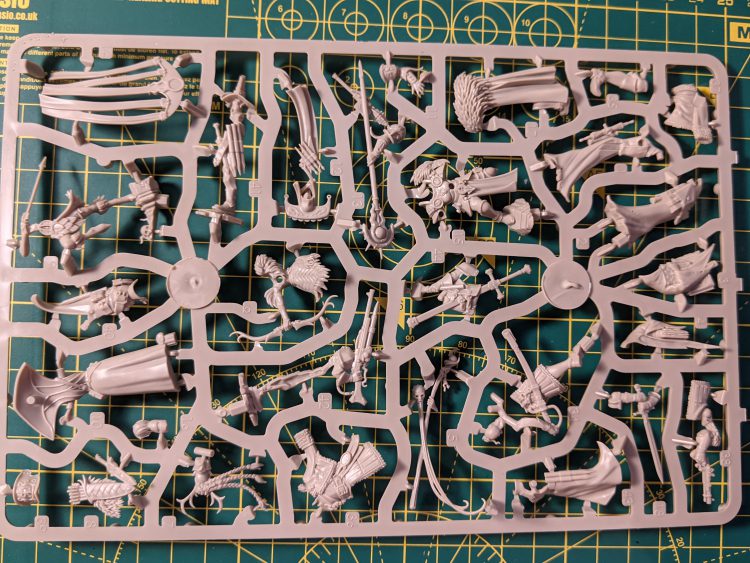 There is one slightly weird choice here, which is that the plastic is pretty boring colour-wise. The heroes are in off-white, and the hostiles are in a standard grey. It’s fine for me, guy who mostly wanted this box in the first place because of how cool all the toys are going to be to paint, but with GW’s recent history of experimenting with coloured sprues for Underworlds and such it’s odd to see it not really be utilised for this box.

The sprues are also instructive as to what is and isn’t likely to see separate release, which is to say that it seems highly likely Radukar is going to show up elsewhere a la Obsidius Mallex, and everything else is going to be in this box only. 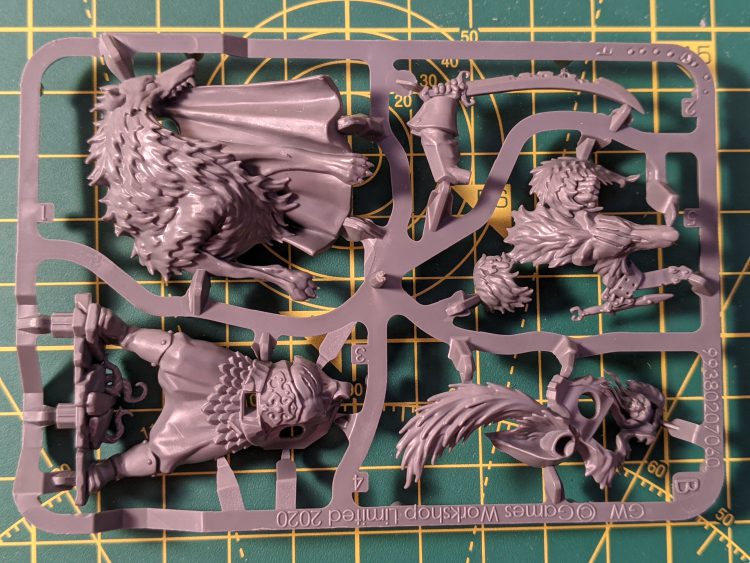 Radukar the Wolf, sitting pretty on his own sprue. Credit: Thundercloud

Naturally there’s also a set of instructions for assembling al these, and well, they’re modern GW instructions. Nothing quite as hilarious as the Pariah Nexus terrain instructions in here, though there is the amusing inclusion of an errata for Dagnai Holdenstock, the Kharadron hero; the original instructions forgot that you need to attach a little nub to his back to hold on his steampunk accoutrements.

Lots of lovely card in here, firstly with the map itself, with four full sheets of double-sided card tiles to represent the doomed city of Ulfenkarn. It’s all thick, glossy cardstock which looks and feels great, and you get a surprising diversity of possible maps. There’s another sheet of tokens and bits and pieces in the same material (with a few other tokens printed around the edges of the sheets with the maps on), and some handy bags to pack them all away in.

Besides those, there’s also the character cards – big and well-presented, and again double-sided for your normal and “inspired” versions – and a variety of artefacts and abilities in a couple of different decks. As a Board Game Idiot I appreciate having this kind of easy visual aid to use (and we’ll talk more about what all these things actually do in the rules article to come shortly). 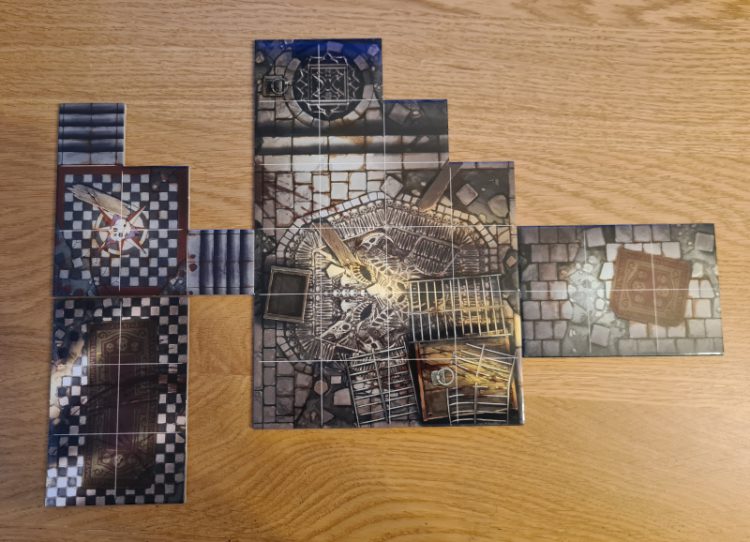 At its core Cursed City is made up of two rulebooks – the basic one labelled, naturally enough, “The Rulebook”, and then the Quest Book which gives you a full campaign to play through as your heroes battle through Ulfenkarn. These are nicely presented, with a tutorial section followed by more advanced rules, and then the quests presented separately to let you get into playing scenarios – though of course you could also just make up your own. This also leaves room for expansion content with additional quests in the same mode as Blackstone Fortress, though Games Workshop haven’t announced any plans for these yet, and unlike the BSF box there’s no mention made of any in the box itself – just a vague description of this as the “first” quest. Fingers crossed for expansions to come over the next year or two.

Additionally, there’s a full set of warscrolls for Age of Sigmar, allowing you to use these guys in that system as well. Alice has Opinions about these and I’ll let her take the lead in the rules hot take, but suffice to say they’re not great. Finally there’s another mysterious envelope not to be opened until the ‘Final Assault Decapitation Journey’ has been completed. I’m sure someone on YouTube will have a poorly-focused video of it available by the time anyone reads this, but I for one am not opening it or seeking out what’s inside until I’ve actually had a chance to play through the game.

Dice are the last thing of note in here; there’s a whole bunch of ordinary D6s and D12s, and then a few other dice of various shapes with a mix of blank and marked faces, used for some of the interactions in the game.

Overall it’s a nice package – the box itself is gorgeous with the key Cursed City art piece on the cover, and everything inside feels nicely substantial. The only real strike against it at time of writing is the uncertainty of what will happen with it going forwards; as the anchor for a line of releases over the next couple of years this is a great box stuffed with beautiful models and a reasonable amount of game, but if it does in fact prove to be a one and done as has been rumoured, it’s a little hard to know what its life looks like, and there’s every chance that anyone reading an unboxing of it will already have made up their mind – and either had or missed their chance – to buy it or not. Let’s hope that it does indeed stay in production, and that we see more expansions in the range in future.

That’s it for this first look at Cursed City; we’ll be back in a few minutes with a full look at the rules.

Update: While working on the rules review our team did find explicit reference to expansions – which suggests it’s not going away. Good news!