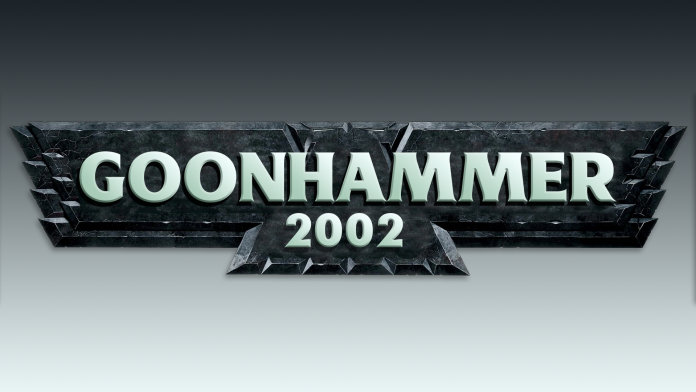 Every year April 1st rolls around and every year the internet rushes to embarrass itself with a bunch of bad hoaxes and jokes that mostly make us groan. It’s not that we don’t like japes and ruses – we’re quite the fans here at Goonhammer, we love us a good jape – it’s just that most of them aren’t funny and tend to just ruin your site experience for a day.

So instead we’re doing the same thing we did last year – we’re doing a themed week. While last year we looked back 25 years at the games we loved and played in 1996, this year we’re looking back 20 years to 2002. It was an interesting time for games and a hell of a time for classic geek culture – Warhammer 40,000’s third edition was in full swing, and looking at its second round of codex releases for many armies, while Warhammer Fantasy Battles was starting things out with its sixth edition. The Gamecube had just released the fall prior, and the sixth generation of game consoles was heating up, leading into what would be an incredible year for games. Peter Jackson was doing the impossible by giving us an incredible Lord of the Rings movie trilogy, with Fellowship coming out Christmas prior and Two Towers releasing in December, and Attack of the Clones proved just how dire things could get for the Star Wars franchise. Magic: the Gathering was finally available in digital format and the latter two sets of Odyssey block would help keep the momentum that the Invasion block had generated a year prior.

So join us over the next seven days as we look back on some of our favorite games, moments, and media from 2002 and pretend like we’re kids again. Except for those of us who weren’t born yet. You make me feel like I’m going to crumble to dust and die.