Finishing your own army is core to the Warhammer 40,000 hobby. In our Army Showcase series, Goonhammer contributors take a look at the armies we’ve been collecting for years, and the new ones we’ve just finished – what drew us to them, why we keep building and painting, and how they play on the table. For this week’s installment, here’s Greg “ANAmal.net” Chiasson with his Booley’s Tau.

I first started collecting Tau last month. I’d been looking at getting rid of my incredibly bad Dark Angels for a while, coincidentally right when Goonhammer author Jack “Booley” Hunter was trying to get rid of his Tau. I didn’t exactly make him an offer here. It’s more that I was cyber-bullied into taking them, and other than lying about my shipping address, there was pretty much no way this army wasn’t going to be inflicted on me. In a way, it’s a microcosm of my Goonhammer career: a thankless task pretty much tailor-made to dunk on me, but also something I opted into for some reason, and continue to participate in due to Having Problems.

At any rate, I was out of the country when this was all going down, but when I got back, three giant smashed-up boxes were waiting for me at the office. I get roasted constantly at work, because I typically get multiple Amazon deliveries 3-5 days a week. Most of them are Cat Accessories, but a non-zero number are cases of delicious Pocari Sweat. These had been sitting for a few days, and apparently the rest of the company had been amusing themselves by stacking them in ever more precarious arrangements. As soon as I sat down I started digging in, and there was a ridiculous amount of stuff in there. A box of Apocalypse movement trays, once opened, practically exploded, and about 30 Fire Warriors fell out of it.

The army led to this post about adding capacity to my shelving, and so far very little other progress, but since I’ve now mustered a full army, it’s worth showcasing.

In true Booley fashion, and to do justice to his painting and photography standards, I set up my light box and got to work: 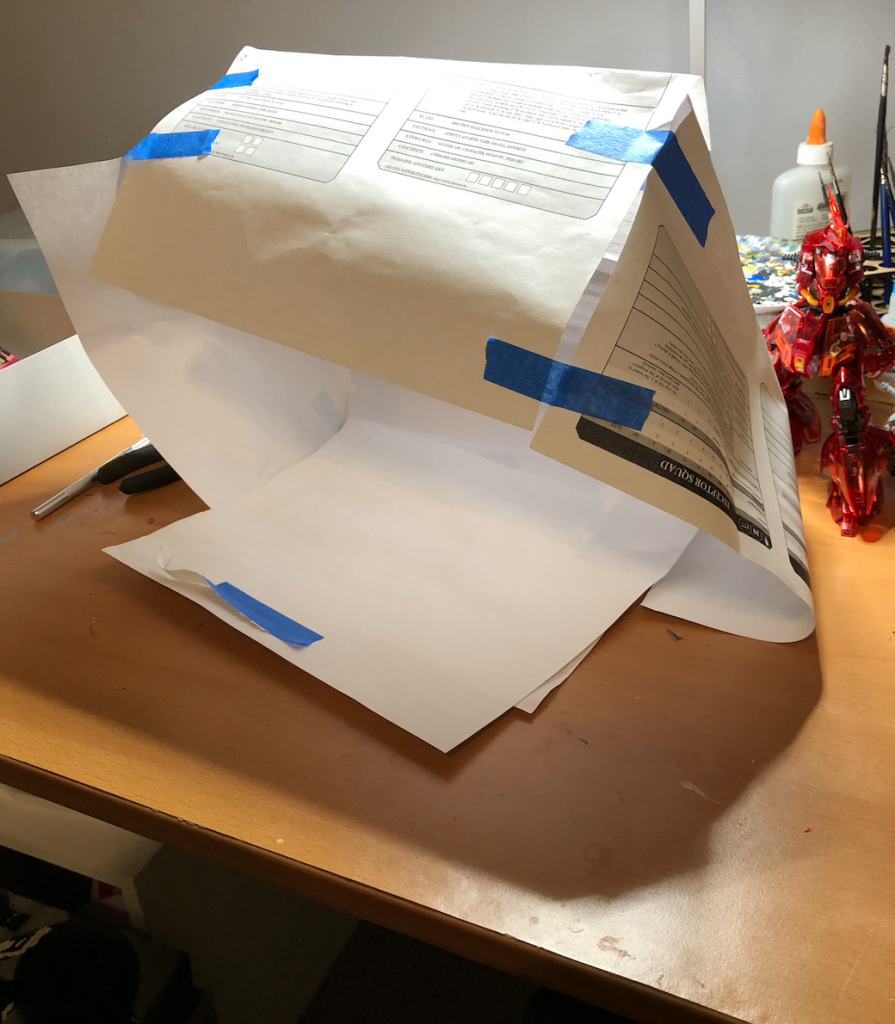 Pretty much the same thing, right?

The paint scheme, which I came up with from Booley telling me what he did and following his recipes, is pretty simple to pull off, but still looks sharp. It’s based on the Cerberus guys from Mass Effect 2, which is both obvious to anyone that’s ever played Mass Effect, and also something I didn’t pick up on until he told me. Tau models have less detail compared to Space Marines with their big stupid gold chains, or Orks with their big stupid belts and rusty guns with spikes all over the place, which are the other armies I’ve attempted to paint. The aesthetic is certainly it’s own thing that you might not be into, but it definitely makes them paint up quick.

I’ve kicked around a few lists, but the army has yet to hit the table for me (and, I assume, for Jack before me). I can only assume that I will still lose all my games, but this time it’ll be in a way that takes forever and pisses everyone off. Anyway, here’s some models. 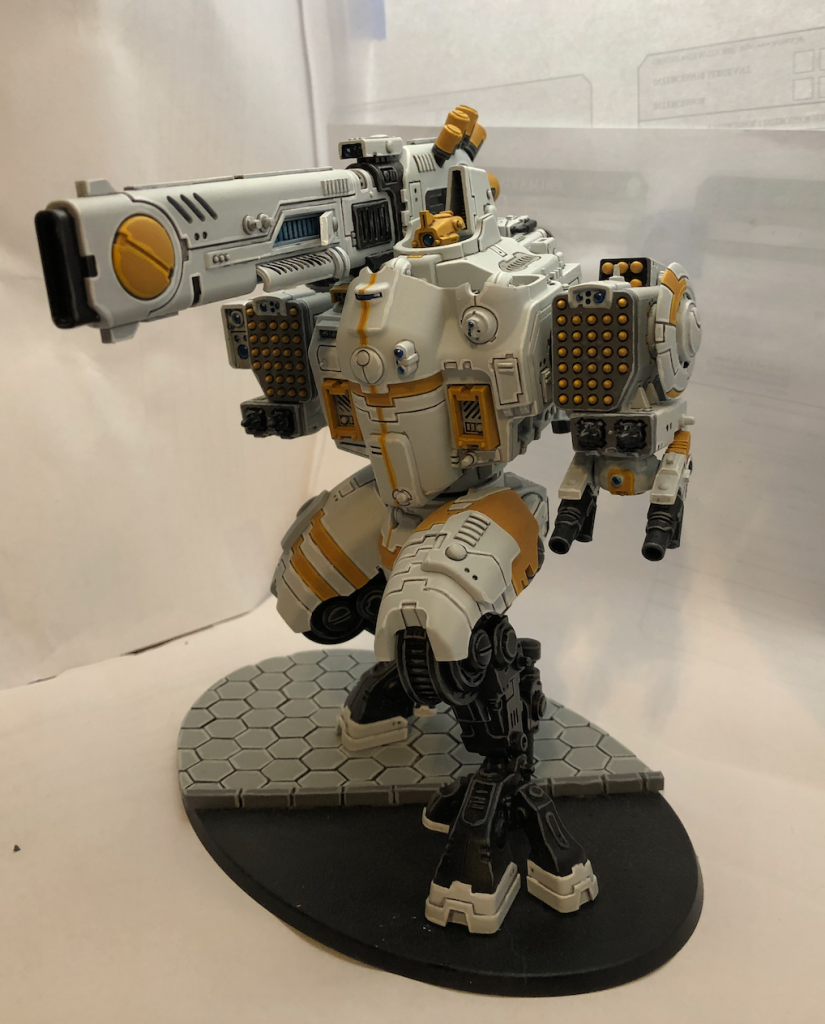 The Stormsurge is probably one of my favorite models that I’ve built. I had to re-assemble the legs because jamming models into a box and letting UPS drop-kick it a thousand miles took a toll, and re-attach the gun because Jack snapped it off – either out of spite or to make it fit in the crate better, who can know. It shows off the scheme, where the white armor really sticks out against the black panel lining, and I like the way all those missiles pop in yellow. I also have no idea which gun it has, but I think that’s fine because no one else will either? Please do not jump into the comments and tell me. Due to personal reasons, I will not be reading replies at this or any other time.

If I could change anything about this model, it would be for Booley to have used the various third-party bits on Shapeways to close up the cockpit, but I didn’t feel like doing it. 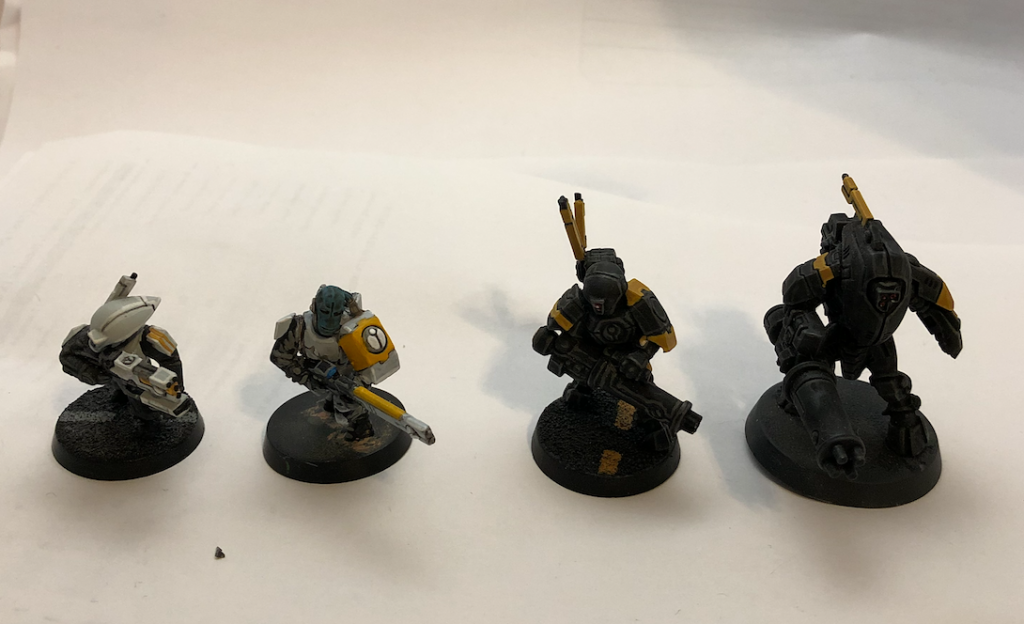 I did actually paint one of these models: The bare-headed Fire Warrior, which you can tell because he sucks.

Something I like about the army is that the sneakier units – so the stealth suits and Ghostkeels, with attendant drones – forego the white armor panels and are done all in black. I think I did a good job with it, by having Booley paint them so the black still has some depth to it.

Much like the white, the trick is not to really use actual white or black. The white is VGC Ghost Grey with white highlights, and the black is VMC Black Grey, with a Nuln Oil wash to bring down the shadows. I know this because I had to paint three Fire Warriors to fill out a Battalion’s worth (at 3 minimum squads of 5 guys – I obviously want, and will paint, more, but we’ll cover that later), which is the sum total of the painting I have done on this army.

So many friggin’ missiles. Too many, even.

Oh god, the Broadsides. They didn’t explode the most out of anything in the box, that would be the Commanders, but pretty much all of them lost their ankles, and at least one of them managed to disintegrate at both hips and both shoulders. Between the Smart Missiles, Seeker Missiles, High-Yield Missile Pods, and Missile Drones, these guys do a lot of damage on the tabletop. Probably. I mean it’s a lot of dice, at least, I guess, but I suspect Jack never played a game with my army, and I know I didn’t. Regardless, they look cool and I’m happy with my paintjob that Booley did.

I’m also still finding more drones every time I look in the foam that the army showed up in, so if this somehow isn’t enough, there might be extra missile drones in with Booley’s three railsides that I have, or with the three other Broadsides that I also inexplicably bought. 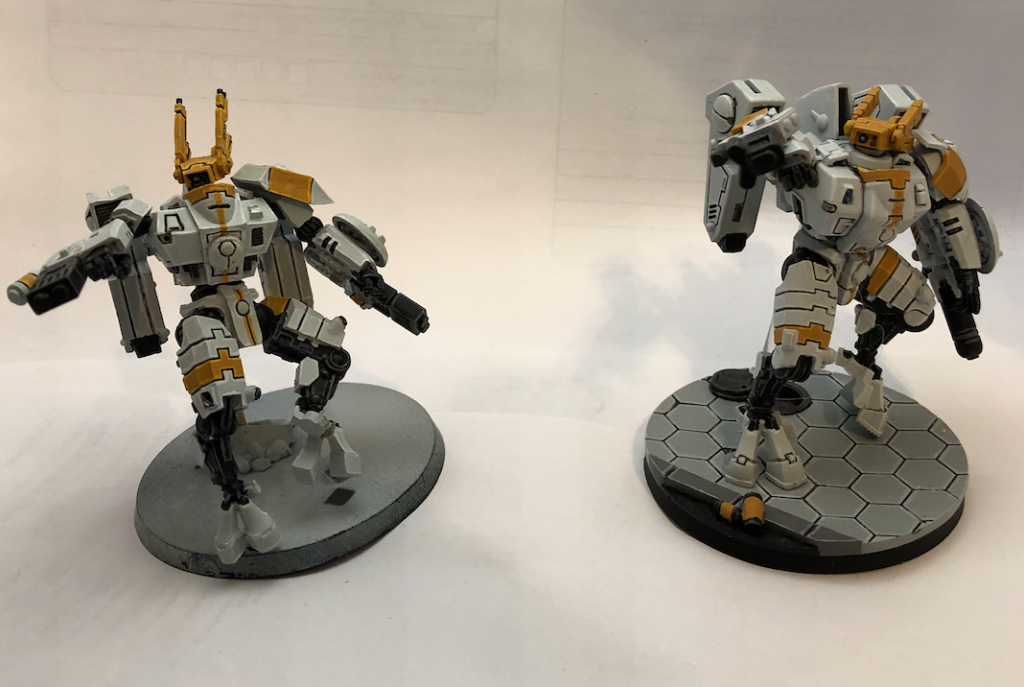 I don’t want to talk about how much pinning and re-construction these needed.

Not the optimal wargear, but I went with the dual-fusion-and-shield loadout because that was what Booley put on there. The other guy has what I think is either a Cyclic Ion Blaster (good) or a Flamer (??), and a couple of plasmas. As an incorrigible Dark Angels player, I’m not sure how to handle plasma weapons that don’t blow up and murder the user, but fortunately Tau Ion weapons are there for me on that front.

I’m still working on basing these guys, obviously, but for the one, I used resin bases that Jack bought from somewhere and painted and attached to the models, which he also painted. For the smaller models, I’ll probably give them a light sandy base, then paint it black and draw traffic lines on them, an idea that occurred to me when I read it in a Discord message that Booley sent me telling me to do exactly that.

After a long process of Booley building and painting Tau, I’m finally ready to hit the table with this, my newest and best-looking army. I’m not sure that some of the weapon choices that I made, based entirely on what the models already had, are optimal, but I’ve also never played as or against Tau before so questions like “what are the best support systems?” and “what even is a markerlight?” are probably beyond my reach until I’ve gotten a few games in.

Short-term plans for this army are to prime and Contrast paint the remaining 40+ Fire Warriors and 20+ Pathfinders, to fill out a second Battalion (or one Brigade) with troops, and then just start throwing in Rail Rifles. I’m excited to get some practice with them, but that might be a while: I’m stuck with my Dark Angels and their comically inept Chaplain warmaster (who is a Dreadnought now, but not the litany-having kind), until the campaign I’m playing in ends, which is lovely.

This blog is over.

Thanks…. Greg? We’re always looking for more armies to feature on Army Showcase – especially ones that the author actually painted and which weren’t drop-podded into their office by a vastly better painter, modeller, and human being. If you have an army you’d love to see published on the site, then let us know about it at contact@goonhammer.com or the Facebook page!