The Painter: Robert “TheChirurgeon” Jones
The Army: World Eaters
Points: About 3,000
Collected: Since 2015

Back in 2015, Games Workshop decided to throw Chaos a bone in 40k by releasing a surprise codex: Khorne Daemonkin. The book was interesting in that it presented formations (good riddance to those, btw) of Khorne Daemons and Chaos Space Marines as a unified force, with a sweet mechanic called Blood Tithe, where you’d accrue points for killing enemy models or having your own models die (Khorne doesn’t care from whence the blood flows, after all), and then you could spend those points at the start of each turn on bonuses like +1 Attack or Feel No Pain. I had been looking for an excuse to get into the army and when fellow goon Exinos had to move and sell all of his models, I offered to buy the full collection off him. Exinos had somewhere around eight to ten thousand points of Chaos Space Marines including a bunch of Forge World upgrade kits on models, and that supplied me with more than enough Berserkers to get started. I’d eventually add on to the army, picking up some more vehicles and adding a crapload of Khorne daemons to make it a true Daemonkin army. These days the daemons see more play, as they were recently a part of my NOVA army, but I try and get the Berserkers out every now and again.

Currently I have about 3,000 points of World Eaters painted, plus a bunch of Khorne Daemons that were part of my Daemonkin army that I’m not showing off today. That’s 20 Berserkers, Kharn, an Exalted Champion, 8 bikes, 10 Cultists, a Forge World Dreadnought, 5 Terminators, Zhufor, a Land Raider, two Rhinos, a Heldrake, a Winged Daemon Prince, a Chaos Lord on Juggernaut, 5 Possessed, 5 Raptors, and a Kharybdis Assault Claw. I originally bought the Kharybdis for the stupid Forge World formation that let you put 20 Berserkers into a Kharybdis and then when you’d Deep Strike it onto the table, they could all pile out and charge. I used this trick exactly one time.

Otherwise, it’s kind of a massive, heavy model to take around. The army in general is a pain in the ass to transport, given how many big bases it has, but I usually don’t have a lot of models when I run it these days.

Overall I’m OK with how the army has turned out. They’re a little brighter than I’d originally intended, and occasionally I’ll touch them up with some Carroburg Crimson to darken them a bit and shade the red, but it’s not a high priority and the character models already have more shading on their armor anyways. When I paint them I start with Khorne Red, then work up to Mephiston Red and Red Sunz Scarlet, but the color transitions tend to not be stark enough and get washed out in most of the photos. It worked out pretty well on Kharn, though. I paint the trim with Retributor Armour and the piping/tubing is done with Castellan Green because again, I’m a big fan of the 2nd edition color schemes for Chaos Space Marines.

To be honest, I don’t have a lot of immediate plans for these guys. I’m going to replace the Berserkers with larger, more modern models eventually, and I’ll probably do some Warp Talons and a Jump Pack Chaos Lord at some point so I can do a World Eaters Host Raptorial detachment, but I’m pretty happy with where these guys are at. If there’s ever a new World Eaters book released then I’ll be all over that shit immediately, but for now the most these guys will get added on is a Termite Drill, but I’ll probably paint that as Black Legion with enough red to plausibly hold a bunch of World Eaters. Otherwise, I tend to add models to armies as they make sense — I’m going to add a Lord Discordant to my Iron Warriors at some point, not because the army needs to be competitive, but because it makes sense for them to have one. Likewise, if a cool new melee unit comes out, I’ll probably add one to my Black Legion and one to my World Eaters.

Alright, let’s talk about the individual models. My favorite model in the army is a toss-up. I’m very happy with Kharn, for example: He’s seen here with his posse, a bunch of old, smol marine Berserkers. This guy was the first Chaos Space Marines character to be re-released and his model still looks great. I love running this guy with Berserkers.

Exinos had converted up a mounted Chaos Space Marine on a Juggernaut in the models he sold to me. I wanted a Chaos Lord riding one, so I gave him a better axe arm and a power fist and finished off the conversion work and painted him. I’m pretty happy with the result. It’s a smarter weapon combo than I usually do, and I’m sure that will come back to haunt me in the next edition. 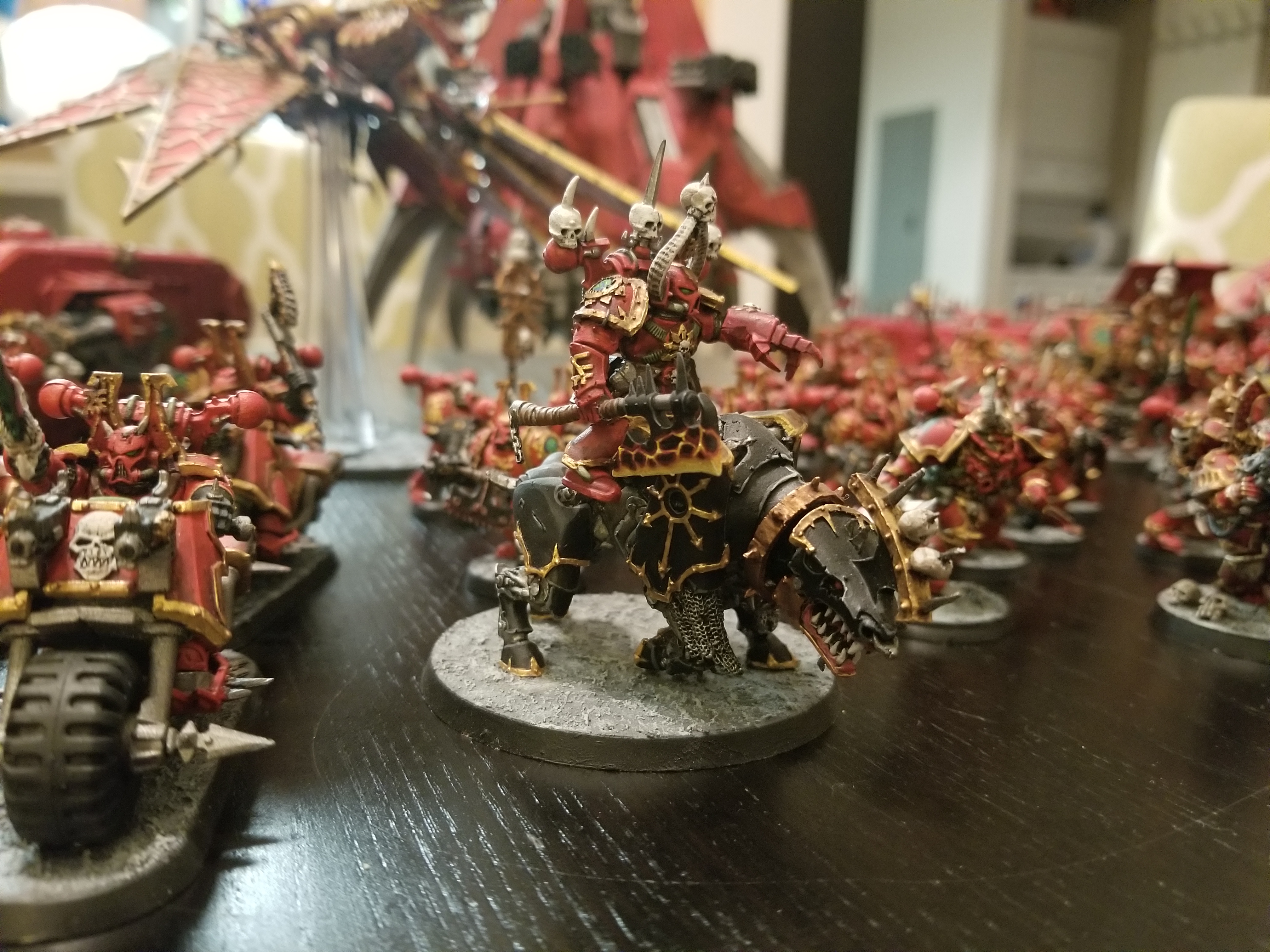 One of the biggest mistakes I think Forge World made was discontinuing the Chaos Dreadnoughts and Rhino/Land Raider doors. They’re such fantastic ways to add character to an army, and the legion-specific markings are great. This World Eaters Dreadnought is one of my favorite models in the army. His arms are magnetized, in case I want to give him a gun ever (narrator voice: He didn’t).

A squad of Possessed were a necessary part of a Khorne Daemonkin army, depending on which formation you wanted to run. So I converted up a squad of Berserker Possessed mashing the kit up with the Possessed kit and trying to only use the best bits. I think the effect mostly worked, but the heads aren’t quite there. I really don’t love the Possessed kit — there are some good bits in it overall, but the heads are trash and they don’t nail the promise or size of possessed like the Gal Vorbak do. The Greater Possessed are a good upgrade, but again, those also don’t quite “get there” for me. My favorite model in the set is the Possessed on the right, who has more of the look I’d go for.

I’ve got a squad of Terminators in the squad, mostly kitted out for melee combat. I love the Forge World Terminator upgrade kits for World Eaters. I wish they were good enough to actually take in a game, though. These guys have never done anything for me, even in 7th edition. Lightning claws have been pretty bad for a while now.

Zhufor the Impaler. This guy was also in the models I bought from Exinos. He’s a very cool model and I like using him as a Chaos Lord in Terminator armor. I don’t think I’ve ever run him as Zhufor. I ditched his Commissar skeleton backpack to make him easier to transport and also because I think that the big backpack/back banners look silly.

The bikes are some of my favorite models in the army. I have eight, but I converted several using mounted Chaos Warrior bits from Warhammer Fantasy so they’re holding sick melee weapons. I really, really wish that Chaos Bikes had melee weapon options to make them a little more threatening. Bikes are another unit right now that can put out insane volumes of fire with Bolter Discipline, but because it’s all AP0, they struggle to actually kill armored targets. I think that with Hateful Assault, they may be more worth looking at, but their melee options are also AP0 and that just doesn’t cut it in the current 40k meta.

This army’s Heldrake, and one of the five I’ve painted. I really don’t enjoy painting these. His wings are magnetized, like the others. Magnetizing Heldrake wings is a massive pain in the ass. Putting the magnets i place is easy; but they’re not powerful enough to actually hold the wings stable, and they tend to rotate downward because they’re so front-heavy. I like the Heldrake model visually but the thing sucks to paint and assemble and transport.

A Land Raider, for my Terminator Lads to roll around in style.

One of the army’s two Rhinos. I put more work into these than the Land Raider, which fits because I use them more often.

A squad of Raptors. I needed these guys for a Khorne Daemonkin Formation and I think I’ve never fielded them in a game. Eventually I’ll round out the squad and do up 5-10 Warp Talons s0 I can realize some of my dumb dreams of doing a World Eaters Host Raptorial. That’ll also mean doing a Jump Pack Chaos Lord at some point.

I keep saying I’ll show my Iron Warriors, and eventually that’ll be true. Probably the next time I do one of these. Hopefully we’ll have some more, non-Chaos armies from other authors in the meantime. Until then, if you have an army you’d like to share for our Army Showcase series, shoot us a note in the comments below or email us at contact@goonhammer.com. We’d love to have more armies to showcase!