Possibly the most Blood Bowl of all Blood Bowl races, the Orcs have been an ever-present at the spiky forefront of the game since time immemorial.  They play hard, die hard, and have a bloody good laugh about it, win or lose.  Our Team Guide will take you through every aspect of how to build and play the Gang Green.

The humble Orc lineman is a great value piece who excels at something linemen the world over have to do: be a punching bag.  Because of the large number of positionals on the Orc team you will tend to find the actual number of these in your roster is pretty low.  Despite that, fouling with them is a strong option to aid Orcs’ primary gameplan, especially if you don’t have any Goblins.

The most pivotal Orc positional, the Bltzer is a great piece out of the box who also has fantastic development potential and who will be central to the team’s success.  Like many Blitzers in Blood Bowl, these will find themselves filling many different roles, often within the same match.  Mobile hitters, mobile cagers, safeties, and often ball carriers.

The Artists Formerly Known as Black Orcs, the Big’Uns got a huge upgrade in BB20 with a boost to MA5.  Four of their most critical pieces getting an upgrade to one of the most important stats in the game was a real shot in the arm for the roster, especially considering they would still be must-takes without it.

Big’Un strength is critical to the Orc gameplan.  The combo of their raw strength and the applied blocking skills of the Blitzers gives Orc coaches a significant toolbox to determine how they bash. 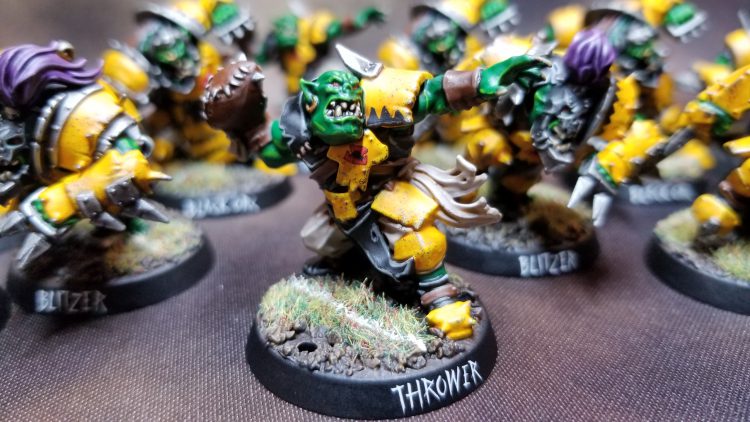 The first of our controversial Orc positionals (we have a few), the Thrower has always been one of the most debated positionals in Blood Bowl.  Sure Hands is a huge boon for average AG teams that require reliable pickups to get their cages going; but MA5 means you are committed to a slow grind, and when you need to do anything quickly you are hamstrung.  He also has AV9+, and if you have to field him on Defense you can bet your opponents will target it.  His passing skills are largely irrelevant outside of exceptional unplanned circumstances, and Animosity doesn’t help.  One upside is access to Leader on Normals, which looks more attractive in a team which now finds itself shorter on these than it used to.  Personally I think Sure Hands outweighs the other issues, but this is the kind of argument that can lead to mass Orcish brawls.

Goblins are a very interesting piece for Orcs.  They offer decent movement and agility, the Dodge and Stunty combo to let them get to places that Orcs rarely can, they facilitate the Throw Team Mate option, and they have great potential as cheap foulers.  All in all, this means at some point it is almost certainly worth throwing 40k at one just to give you these options.

Last but by no means least, Orcs have a Big Guy who is just as slow and even more resilient than the rest of the team.  The Troll can be quite divisive amongst Orc coaches; some enjoy the extra Strength, durability and consequent pitch control he brings.  Some believe that his tendency to go Stupid at precisely the wrong time undermines the whole consistent beauty of the Orc gameplan.  Both are right!

If you do take one, you might as well look to get a Goblin as well just to enable TTM.

Orcs are blessed with a very decent pool of Star players, most of whom are Goblins.  The standout is Bomber Dribblesnot, who at 50k is a trivial expense providing immense potential value for a team like Orcs.  Fungus the loon at 70k falls mostly into the same category.

Sadly, Orcs currently lack one of their favourite old options, the Troll star Ripper Bolgrot.  Their best current bet for a higher strength basher is Varag at 270k.  He is a very strong piece, with Block, Mighty Blow (which he can push even further with Crushing Blow), and Jump Up helping to keep him in the action on every turn.

Orcs are probably the definitive cage and bash team.  With low agility and movement on many players, and good blocking and armour, they have little choice but to play to their strengths and embrace a slow grind to victory.  Consequently to play Orcs well you must master the art of advancing a cage and scoring in 8 turns.  This can be very easy if you bash hard enough, but much more difficult if your opponent stubbonly refuses to get crumped.

One of the key skills to master with Orcs is to mix up your Big’Uns and Blitzers so you are able to leverage both their strengths as you drive.  And though Big’Uns make tough to shift cage corners, you want to ensure their strength is out there on your front lines where it can move opponents and create space for your cage to move into.

Defensively your main weakness is speed.  If opponents (especially agility teams) are able to exploit a flank or make a big hole anywhere in your line, they can easily exploit it and screen you out.  Generally this means you must play a conservative defensive plan ensuring you cover the width of the pitch and challenge your opponent to break you down.

Starting Orc builds have to make a couple of big decisions: to Thrower or not to Thrower, to Troll or not to Troll.  An additional wrinkle is that as a result of pricing changes made in BB20, Orcs struggle to find any builds that start with 3 Rerolls, which used to be a staple for them.

I would consider the following Thrower build to be a good compromise:

This comes to 965k, leaving 30k to spend on Dedicated Fans or save for further purchases.

Troll builds require some sacrifices.  In this case, we have dropped a Blitzer.

In this build I have included a Goblin because if you take a Troll, having a TTM option can be quite a big deal for Orcs.  But the Goblin can be swapped out for a Lineman if you just want to focus on being a nasty and resilient basher (that is why you are playing Orcs right?).

Depending on your starting build, Thrower, Troll, Goblin, Reroll, and Apothecary will all be on your list of potential development options.  Despite its lower value in BB20, the Apo remains a very strong choice for Orcs because they tend to skill slowly and have a very strong core of positionals that they really want to develop.  It is entirely viable to play Orcs without massively expanding the roster, and just focus on developing a very strong 12 or 13 player roster without Trolls, Goblins or too many RR’s (3 is fine).  In league environments this will be very TV and SPP efficient (concentrating MVPs on your best players) and can give you good matchups with inducements like the aforementioned Bomber Dribblesnot. 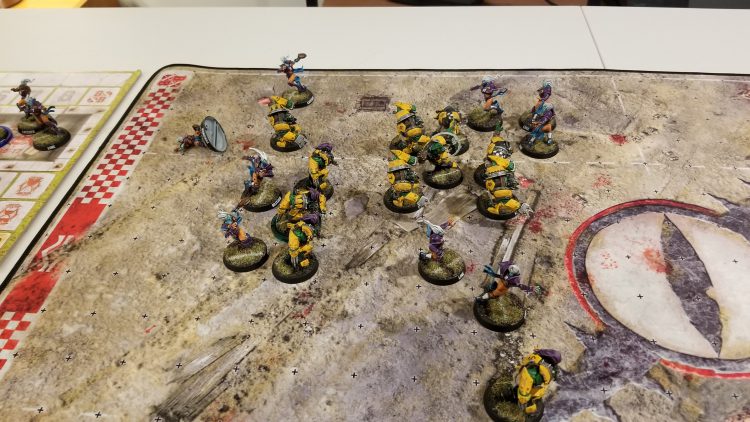 As with League you are going to have to make a decision about a number of optional positionals.  Typical Tournament spends mean Troll builds are generally far more viable though, so let’s start with one of those:

This is 1130k, which means you can add an Assistant Coach or other extra on top.  12 players means you don’t have to field the Goblin until you want to.  If the rules pack allows stars, the lineman can be dropped for Bomber Dribblesnot, but you don’t have any room for bribes.

Another possibility is to ditch the Troll and Thrower and concentrate on a strong core:

This comes to 1010K.  This core can be built out in various different ways depending on your rules pack.  For an 1100 tourney you can take one Goblin and Apo (or Bomber).  For 1150 you can take all the extras.  For 1200 you could potentially take one Goblin, Bomber and a bribe.  There are many options here, but remember, if you build without a Thrower, you will probably need to spend a skill choice on Sure Hands on a Blitzer.

Orcs want some amount of Block and Guard on Big’Uns, some amount of Guard, Tackle, and Mighty Blow on Blitzers, and any other skills will depend on what kind of Orc build you lean into.  In any skillpack that allows Orcs to take secondaries, a Troll with Block is very strong.  If you take a Thrower, putting Block on it will be very tempting, but I would prioritise skilling Blitzers and Big’Uns.

Orcs are the original Tier 1.5 team.  They are not quite good enough to hang with the rest of Tier 1 with only a few skills, but they can feel very strong when put into Tier 2.  In 3-tier skill packs I think they belong in Tier 1.  In 5-tier skillpacks they would probably go in 2.  Orcs remain a very strong team whose simple and effective gameplan can be exploited to success by beginners and veterans alike.

We hope you’ve enjoyed this guide to the meanest and greenest Blood Bowl team there is; as always if you have any feedback or requests for our Blood Bowl coverage, drop us a line at Contact@Goonhammer.com