Happy New Year, Sports Fans! We’re back this week and we’ve asked Dan to detail his latest Blood Bowl hobby project: The Blitzburgh Death-Dealers! Get ready for some extremely forced, livestock-based puns mixed with some hyper-regional sports jokes in what can only be described as a labor of love! Take it away, Dan!

For some months, I’ve been mentioning on the Badcast that I’ve been working on a Secret Project. And this is it! Early last year I decided that I was finally going to get my brother into Blood Bowl. He’s been curious about it for a while and we’d do things like play 7s on family trips, but I knew I could permanently snare him if I just painted him a bespoke team that he would no-doubt love. So, I set about to do just that! I started building and painting in September with a deadline of Christmas Day for delivery.

First, I had to decide on what would be best team for him. Now, my brother, Sam, is a normie, but he used to play Warhammer Fantasy Battles with me on the living room floor way back in the day. And while I was all over the place with my favorite armies, he always loved Chaos Warriors. With the best armor in the game and a truly impressive array of weaponry, they were rarely bested in combat. And along with Chaos Warriors came beastmen, minotaurs, and all sorts of other monsters. I figured that having a team filled with recognizable characters from the Old World would spark his nostalgia and give him an immediate emotional connection to the team.

So, I went with a Chaos Chosen team. Visually, they’re perfect to hit Sam in the nostalgia bone, and on the field they’re known for a straightforward and direct palystyle: punch the other team as hard as they can and worry about the ball when the dust settles! A team like this is perfect for a new player. Sam can concentrate on bashing the heck out of his opponents without worrying too much about losing all of his players to immediate retaliation.

Now, how am I going to paint these things? For reasons that I don’t fully understand, Sam is a fan of the Pittsburgh Steelers. That might not seem like a strange thing to you, but we did not grow up in Western Pennsylvania. In fact, where we grew up, the Washington D.C. area, has its own NFL team, the recently re-named Washington Commanders. I, being a loyal Washingtonian, chose to root for the home team, but Sam ventured Northwest and chose black and yellow over burgundy and gold. Just to be clear, he was right to do this. During his life, he’s got to see his favorite team win two Super Bowls. Meanwhile, I have given up on the NFL because my formerly favorite team serves as the ultimate example of how to be the worst franchise in sports.

Anyways, I knew that for whatever team I’d choose to give him, they’d be painted black and yellow. I’ve already outlined how I paint black in the How to Paint Everything: Raven Guard, and I’m sure you can find other places to learn how to paint skin, leather, and metal, so I’ll instead focus on my yellow and the Beastmen skin and fur. I once again use Citadel paints and regular-ass brushes. 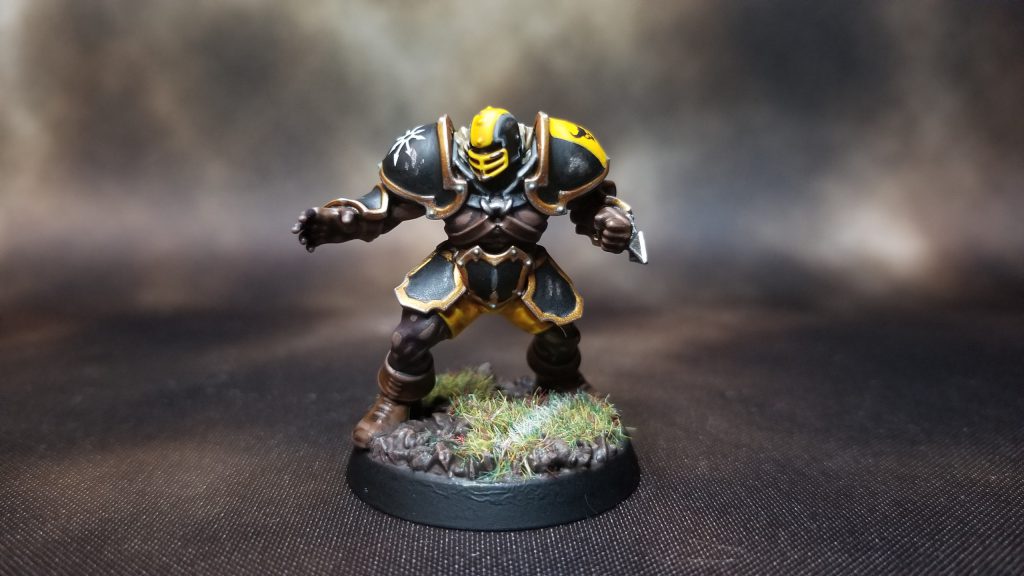 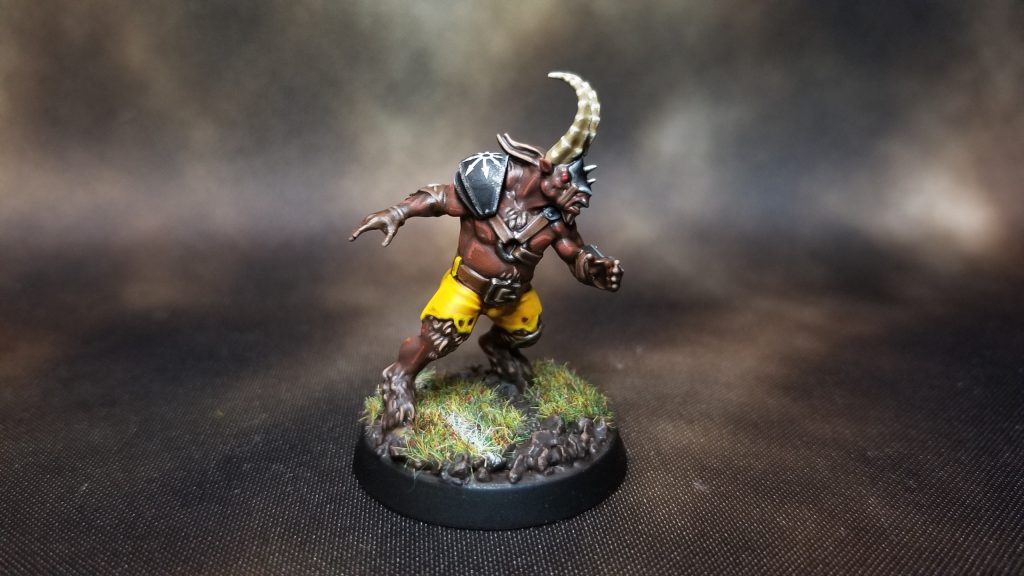 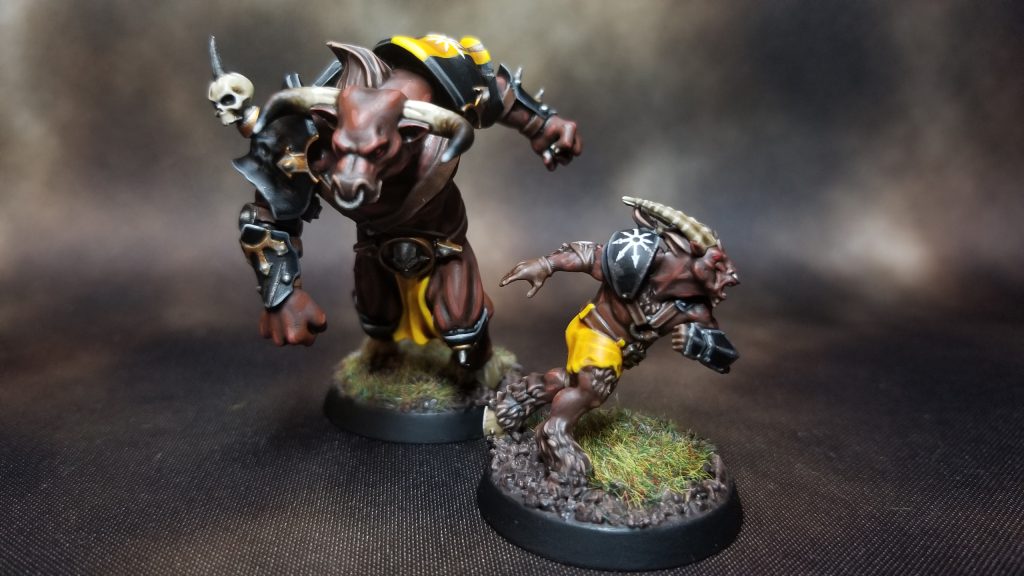 The Chaos Chosen team is made up of three positions: 0-16 Beastmen Runner Linemen, 0-4 Chosen Blockers, and 0-1 Big Guy from a choice of three: Ogre, Troll, or Minotaur. Because I’m a sicko, I couldn’t just buy the Chaos Chosen box and a Minotaur and call it a day. I like to have full rosters for all of my teams, so I did the same treatment here. So I also bought 3 more Beastmen off of eBay to round out the team to 16. Listen, I know that Sam will functionally never have call to have all 16 players on his roster, but I don’t care. This way, if all four of his Chosen Blockers and the Minotaur get hurt and have to Miss Next Game, he can play his next game without using proxies. Is it likely to happen… no – but again, I don’t care!

I chose to include a Minotaur because it is the iconic choice for a Chaos Chosen team, and it is way better than a lame, old, Troll or Ogre. All-told, the roster for the Blitzburgh Death-Dealers is:

Blood Bowl coaches have a long history of making up silly names for their players, and this team is no different. So please, enjoy Sam and mine’s joint efforts in coming up with hilarious names for the Death-Dealers. 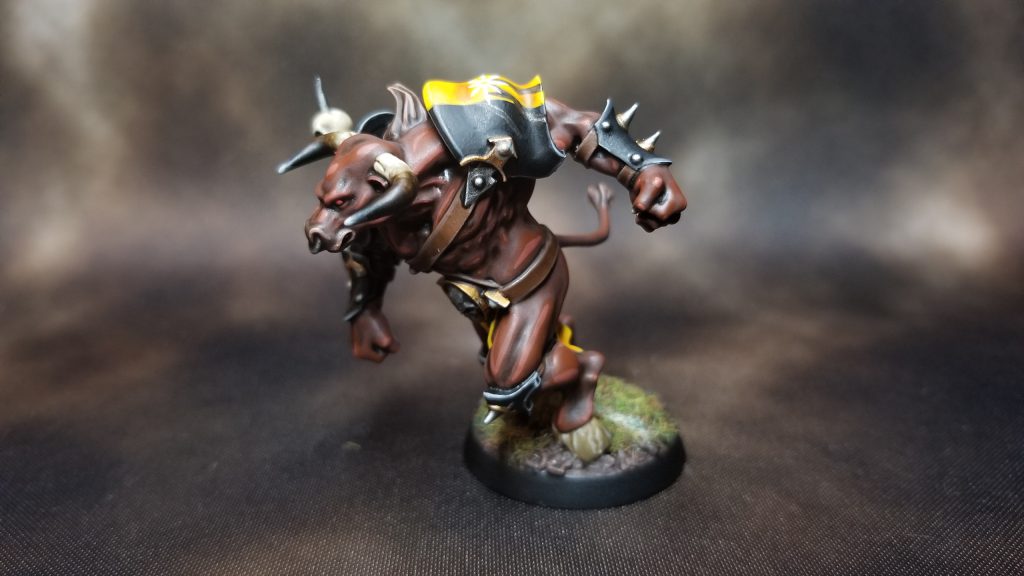 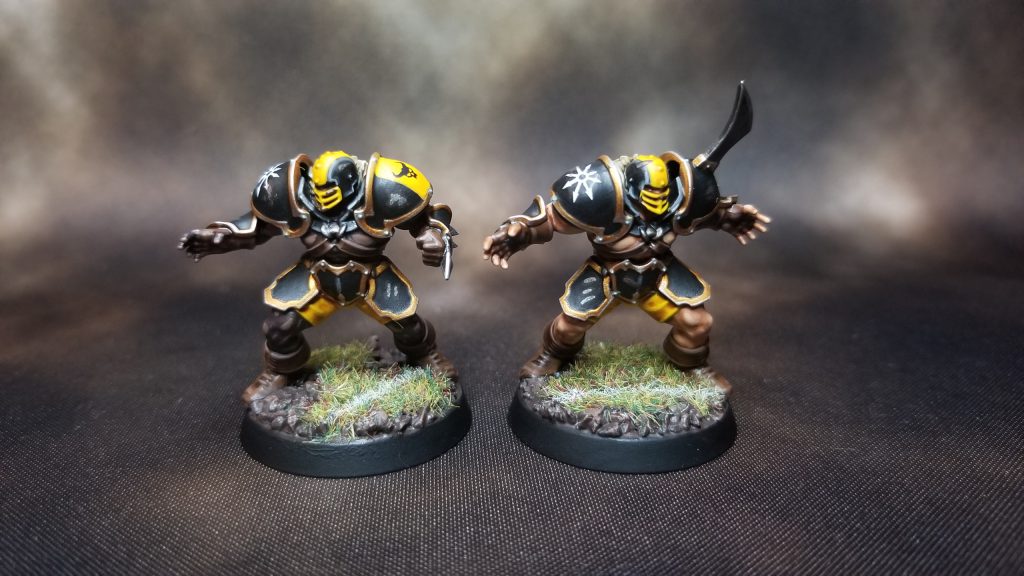 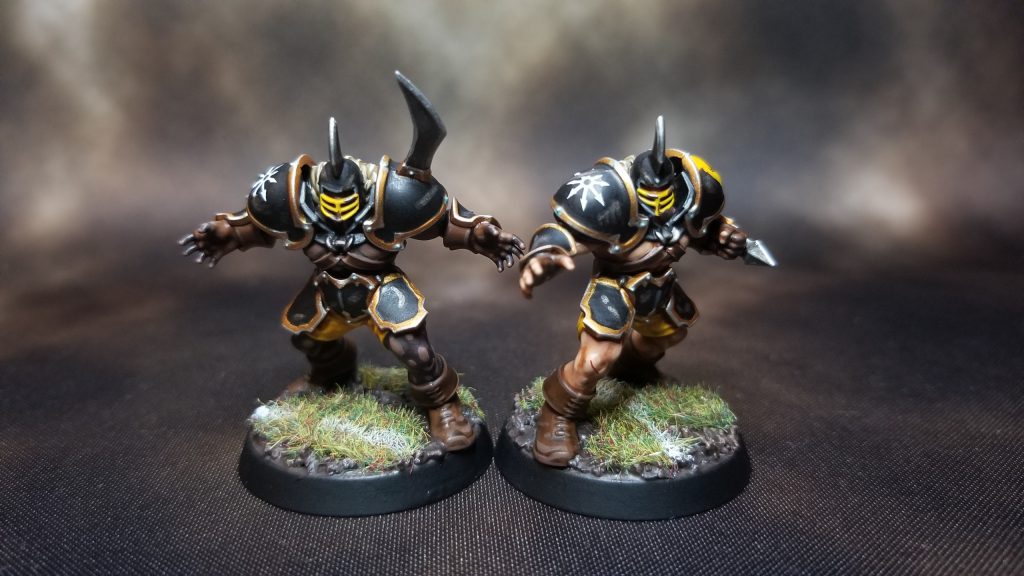 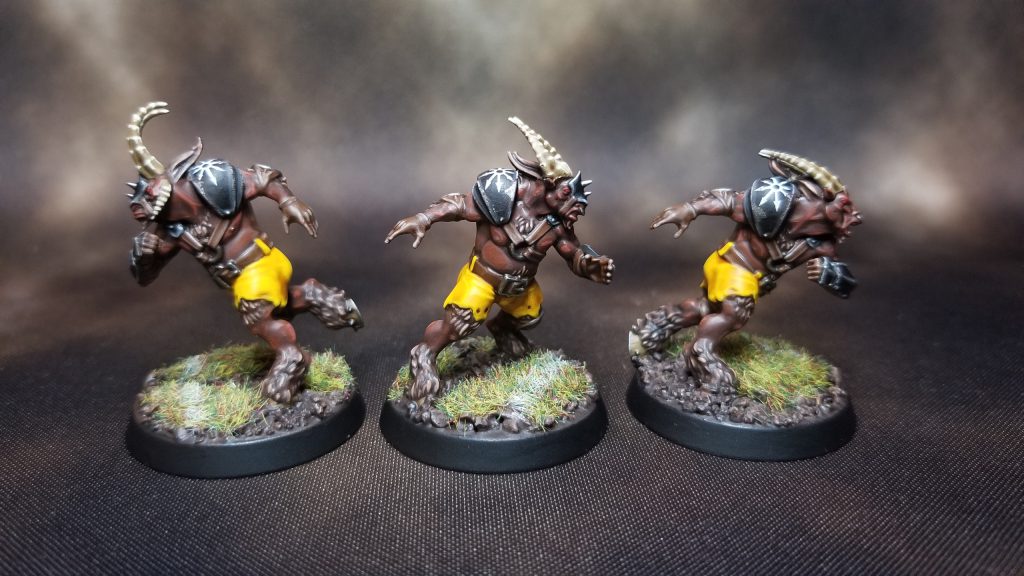 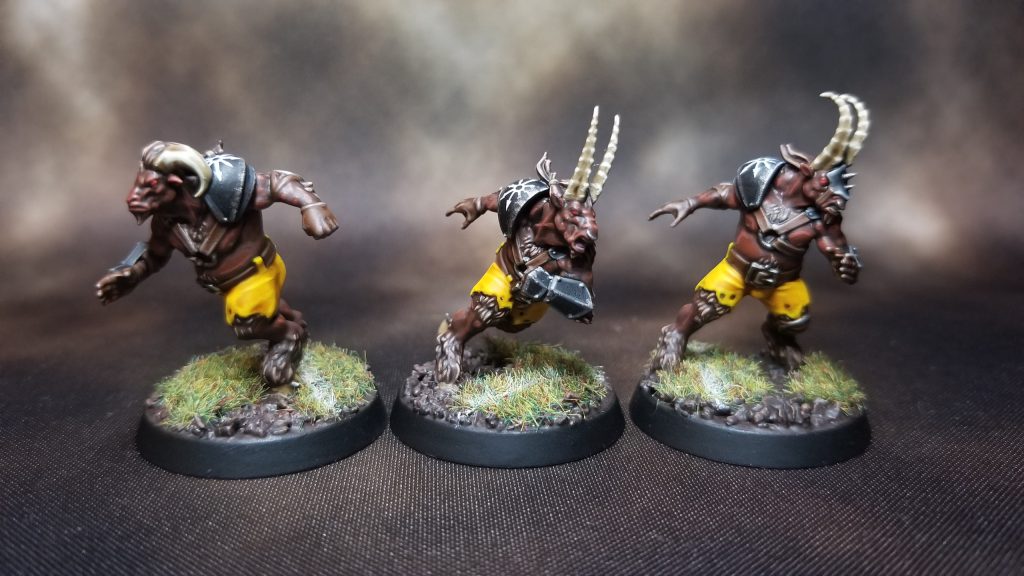 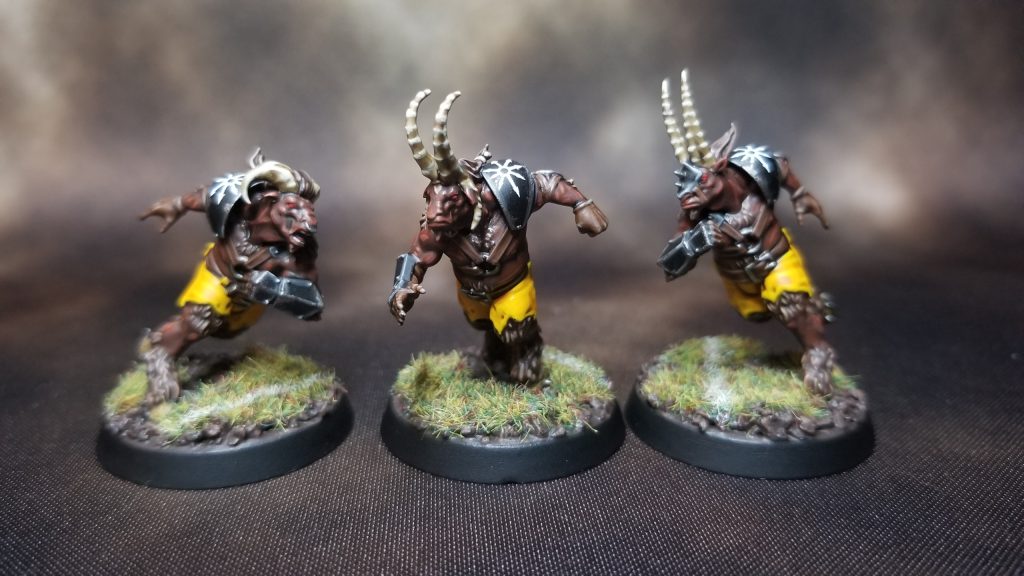 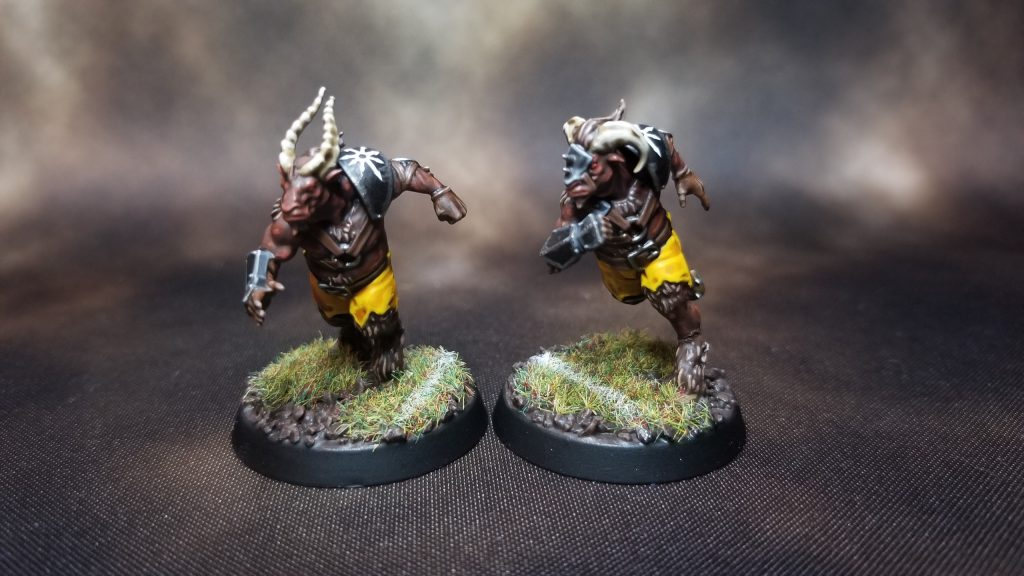 If you got any or all of those references, you’re a champion.

Christmas Day came around, and I was able to present to Sam the mostly-finished Blitzburgh Death-Dealers. I wasn’t able to get Francow Harris done in time, but I got him done a few short days after. Sam was obviously extremely pleased to be the recipient of such a thoughtful and lovingly-prepared gift, and he already excited about joining my yearly local league and even attending this year’s NOVA Open and participating in the Blood Bowl tournaments there! Also, I’m thrilled to finally rope him into tabletop gaming as it’s one more thing that he and I can share as adults this time around.

I cannot recommend giving a loved one the gift of Blood Bowl enough. He’s so excited to jump into the game, and I couldn’t be happier to be able to provide that for us. If there’s an important person in your life who might be curious about any of the tabletop games you play, I wholeheartedly recommend putting together a team, warband, army, or whatever for them and inviting them into the hobby. It’s an intensely rewarding experience!

Thanks for reading, Sports Fans! We’ll be back soon with more coverage of everyone’s favorite fantasy football game! Until then, may Nuffle bless your dice! There used to be a blog called Pittsburgh Sports and Mini Ponies – which was half humorous & insightful sports coverage and half pictures of tiny horses. I think about that a lot. Anyway, if you have questions / suggestions / pictures of mini ponies you can drop us a line at Contact@Goonhammer.com.