By King_Ghidra Blood Bowl, Crab-stuffed Mushrooms and Dan "The Sex Cannon" Boyd
May 30, 2022

The latest Blood Bowl FAQ updates have been released, and while there’s (thankfully) nothing world-shattering to absorb, there are certainly a few interesting points to pick over.  Our Blood Bowl experts pick over the changes and give their thoughts on where the BB ruleset currently stands. 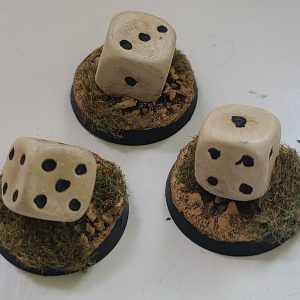 GW once again clarified what a team re-roll is and when you can use it.  The important ones here are the clarifications that Bribes and Argue The Call may not be re-rolled, as this was something of a grey area.

A further note puts an end to a long-used tactic of League TV Min-Maxers:  Coaches may no longer remove Team Rerolls from their team after purchase.

This is a surprising one and not good news for Stunty players:  thrown team-mates that hit any player, friend or foe, will cause a turnover.  This effectively kills the commonly used tactic of hurling a team-mate into a cage or screen to try and make a hole in it for subsequent exploitation during the turn, and in general means Stunty coaches will have to be much more circumspect in the use of TTM (which may be some challenge given the typical mindset of stunty coaches…).

This throws up an annoying inconsistency with the Turnover description that says that a Turnover is only caused when a player Fall[s] Over during their own activation.

Dan: This ruling is dogshit, and there are 2 reasons why:

First, what does and doesn’t cause a Turnover is all over the place.

This is a mess! It used to be that only whether or not the ball was dropped is what determined if the play would end up in a Turnover. That makes sense, at least to me. A consistent through-line of rules. Not any more.

Second, hurling stunties at cages to break them apart is FUN. Stunties are crummy players who have a hard time doing anything but running away from bigger and stronger opponents, and having a Big Guy chuck one at the opposition’s cage was one of the few ways to get in there and cause mayhem with your terrible little garbage people. This ruling is bad simply because it is less fun.

Why this arbitrary change? The Throw Teammate action already involves a randomized scatter. It’s not like coaches were pin-pointing stunties at ball-carriers the world over. All this ruling does is make the poor poorer in a game that is already stacked against stunty teams. Is someone over in Nottingham consistently dunking on GW employees with flying Snotlings or something? Ridiculous.

The latest FAQ clarified that Superb Kick Team-Mate actions do not award Star Player Points (unlike successful Throw Team-Mate actions). While this may be a clarification of rules as written, I’m not sure anyone was asking for this. Thanks, I guess? Sorry, Ogre players.

Some small utility here if you’ve managed to give ‘Jump Up’ to a Treeman.

Gobbos got a few clarifications, here (in addition to the Throw Team-Mate nerf above), B&C players don’t have to use up their entire movement allowance if they don’t want to.

K_G note: This is the kind of thing that really annoys me in the FAQ.  Nowhere in the BB20 rules does it state or imply that B&C had to do this, and the only reason it has been asked is because that’s how it used to work in BB16.  I don’t think clarifying that old rules no longer apply is a good use of the FAQ at all and actually just muddies the waters further.

State of the Rules

Are the rules in a good place?

K_G:  In general, considering that the BB20 release saw GW do a complete re-write (even if mostly just semantically) of pretty much every rule in the game, the rules are in a good place.  I think the adjustment to the current rules for longer-term players who have heads filled with assumptions about how things used to work is harder than for new players who are just reading them as written.

GW’s move (or attempted move) to a keyword system for BB was an admirable goal but I think you would have to say it has only been partially successful.  What we’ve seen in this and previous FAQ updates is that many rules are seemingly tied up in knots of interpretation and circular keyword references with inconsistent behaviours, which casts doubt on the merits of the whole exercise.

My primary source of amazement is that the most significant rule change in BB20, the ability to use multiple Team Rerolls a turn, which is not explicitly stated anywhere in the core rules, and which was confirmed to the community via the first FAQ, did not completely break the game.

CSM: As a casual player, Block seems too good, almost an auto-include when you have the option to take it. I think they should phase it out with Brawl or find other ways to make it less of an auto-pick.

Dan: I was mad about the changes to passing when they rolled them out at the beginning of the edition. Then I played a bunch of games with my pass-happy pro elves and I discovered that the changes weren’t all that bad, and were probably in place to reign in the Dark Elf and Wood Elf high Agility supremacy of the previous edition. My opinion has since changed, and I am fine with all that now. So with that gripe crossed out, my gripe list was really only 2 items long*:

And what did they do with this FAQ? They’ve gone and re-upped the gripe list to 3, what with all the Throw Teammate chicanery. Completely unnecessary and anti-fun.

These gripes aside, Blood Bowl is in a good place at the moment. No one faction completely dominates and just about all play styles are viable in today’s game. I’ve been having a ton of fun with the game lately, and I can’t wait for Tournament season to really kick off in the states.

*: I have a sub-gripe. Thorsen Stoutmead shouldn’t have his unique special ability. His ability should be that he gets Bombardier once per drive (or once per half, even) instead. The rule for throwing stuff at other players already exists, why add to the complexity of the game by giving him his own special version of the skill?

Were there any missed opportunities in the FAQ?

K_G:  At a minimum, releasing the damned thing in a format where you can search it by text strings would have been nice (Yes, this! – CSM).  It has become a huge document with absolutely no designated sub-sections or index, and manually scanning it for any given interaction with whatever action or skill you are using in-game is going to become increasingly impossible.

I personally would have liked to have seen other Stars revisited for balance changes via cost or team eligibility, but I can understand why GW is reluctant to do this or to create the expectation that they may continue to do so with any regularity in the future.  For good or ill, the FAQ remains primarily that, not a balance doc.

CSM: No changes to Dwarves? Still no nerfs and still invincible: They need to replace Block with Brawl (just like the Dwarf Linemen on the OWA team) and kneecap their movement.

The Blood Bowl FAQ team has shown more reluctance to tinker with the rules versus the Wh40k Design Team, but I think dynamic updates would be appreciated, if only to keep the meta fresh!

Dan: I fully support Ghidra’s FAQ format request, and CSM’s spicy dwarf takes are excellent, and I appreciate his willingness to stir things up.

I’d like to see some Star Player costs change here and there. Some are too low (Griff, Hakflem, Morg), and some are too high (Frank, the new Yhetee, Gretchen). So far, GW has been reluctant to change any of the amounts printed on Team Rosters, but I’d also like to see some shifts happen there (hello, 55k Norse Lineman!).

Thanks for reading, Sports Fans! We’ll be back next week with more Blood Bowl coverage! Got any questions? Drop us a line at Contact@Goonhammer.com.