Boardhammer: The Walking Dead – All Out War

This week I was asked to write about one of my absolute favorite games – The Walking Dead – All Out War. AOW is a miniatures skirmish game that is built for both cooperative and versus play, with a large amount of content written for cooperative scenarios straight from the comic book. It is published by Mantic Games and written by Mark Latham. It is a great choice for the Quarantine as you can play it solo or with a family member very easily.

I feel I should mention straight away – this is a game about the comic books (or graphic novels if you prefer) – not the very popular AMC show. While there is a large overlap between the show and comic book in terms of characters, you won’t find Daryl Dixon in this one. There are rules in the game for creating characters, so it wouldn’t be difficult to add him, but you’d have to source your own mini. 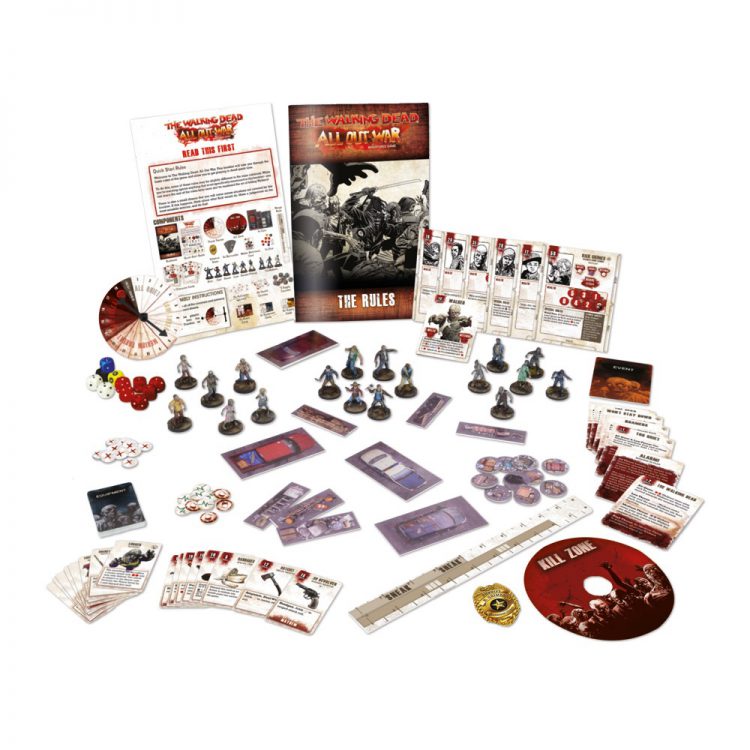 Coming in at $49.99 the core set is fairly standard for a game of this type. Lots of cards (the character cards are US postcard size – they’re lovely), six survivor minis including Rick and Carl, and 12 walker minis. The rulebook is comic-book sized and full color. All the art sourced for the game comes directly from the mega-popular comic, so it looks great. The key thing to know with the Core Set is that it is built for you to grab the rules, cards, walkers, and some character minis; however many of the cooperative scenarios you’ll want are in the expansions. Since The Walking Dead is a very character-driven story, you grab the other expansions with new characters in them that move the story forward. 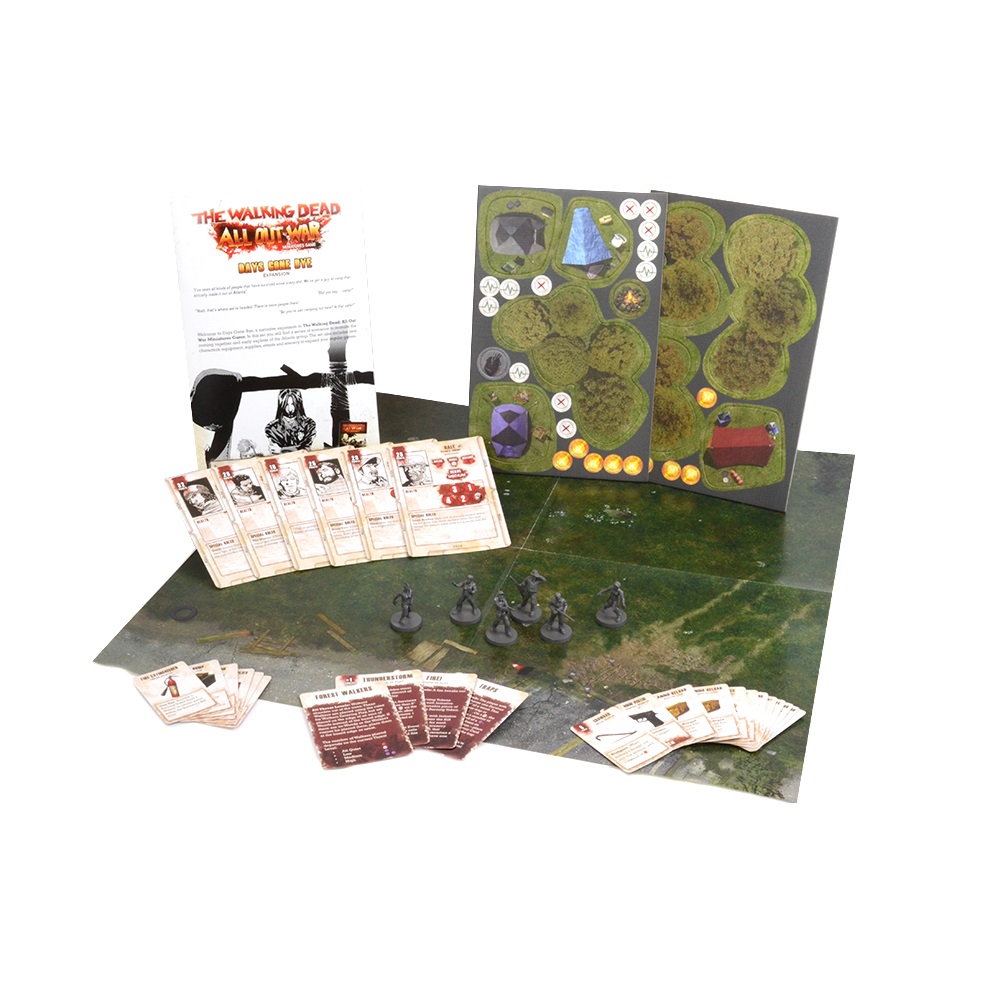 Below I’ve compiled a list of all the expansions for All Out War, plus the important stats. It is important to note that Prelude to Woodbury is a solo expansion, with the player taking on the role of The Governor before he became the leader of his community. There are also free solo AI rules for enemy survivors if you want to use those to command the enemy in PVP scenarios. After you’ve picked up expansions, there are Boosters available with new characters and walkers filling out the entire TWD universe.

If you haven’t picked up an expansion or booster yet and still want to play a scenario, each scenario includes a different way to play it – with a points value and limitations on items, etc.

Almost all the miniatures released for All Out War are hard plastic one-piece models with a built-in base. They are sculpted to look like the comic book, so they have comic book proportions. They are a little heftier than some 28mm models, but not huge. Like most wargaming minis, I’d recommend scraping mold lines and checking to make sure rifles or weapons aren’t warped – a bit of hot water and a bend will straighten them out.

The sculpts are probably the best quality I’ve seen from Mantic. Clean, easy to paint, and reflecting the character from the art in the comic book. Wave Six was released entirely in resin; the minis are fantastic. They take more cleaning up due to the resin casting process, but they’re really well detailed and clean sculpts. All the minis are really easy to paint since they’re wearing modern clothes, not insanely detailed Gothic armor. 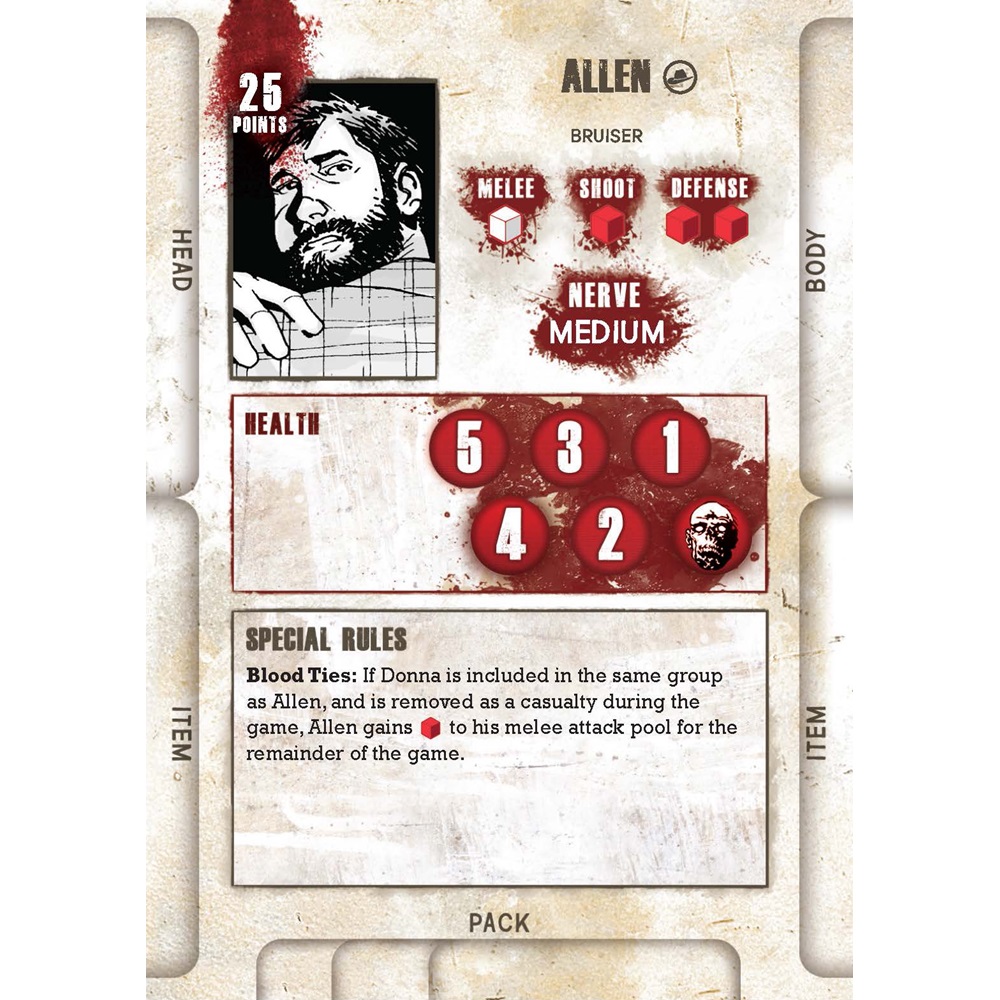 The character cards are huge and gorgeous. Each one has slots on the sides and bottom for where items go on your character. It is easy to track health with one of the included tokens and when you get to the walker head you’re dead (and maybe a walker). Each Survivor has a character type – Runner, Tactician, Bruiser, Marksman, or Support. There are various in-game bonuses for each.

There are factions included, such as the Atlanta Camp, Greene Family, Woodbury Army, etc. You can build groups with factions and some get bonuses; Leaders especially will have abilities that give effects to other characters in the group.

The core box also includes dice, cardboard cars and barricades, and templates. I’d recommend picking up the plastic terrain expansion if you’re into the game as it’ll make your table look great, but you definitely don’t need them. 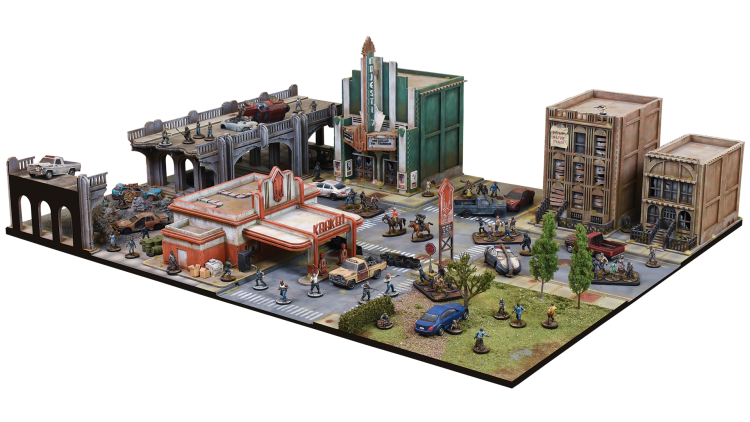 All Out War is a small skirmish game (3-8 models per side, plus 15ish walkers in the middle). Because there are walkers involved, it makes it really easy to play cooperative scenarios using the game engine. The ruleset could be a good skirmish wargame without the walkers, but the walkers definitely add to it. The game uses a Threat mechanic where noise, melee, and event cards heighten the difficulty as it progresses. When the Threat counter gets to 18 the game ends. Using a Hold Nerve action may cause the Threat to go down by one – a key action to make sure more walkers don’t appear from an event card or stave off the game ending.

Players use an alternating activation method to move with models. In a cooperative game, players just alternate with their own models. Each model gets two actions and they can’t be the same type of action: move, shoot, search supply counters, hold nerve, make noise, and a few others. Melee is done at the end of the turn, all at once. When moving, you can choose to sneak 4″ or run 8″ – running causes Noise, attracting the nearest walker. Shooting will almost always cause Mayhem, raising the Threat by one and attracting all walkers within 10″. Walkers move directly toward sources of noise. If they contact terrain they will stop, but if they started in contact with the terrain they’ll move around it toward the source of noise.

Before each survivor activates, you check the Threat level. If it is higher than the current survivors’ nerve rating then they must take a Panic check. This could cause the survivor to run away, yell, etc. Usually it results in lost actions and really forces you to try to keep the Threat low. 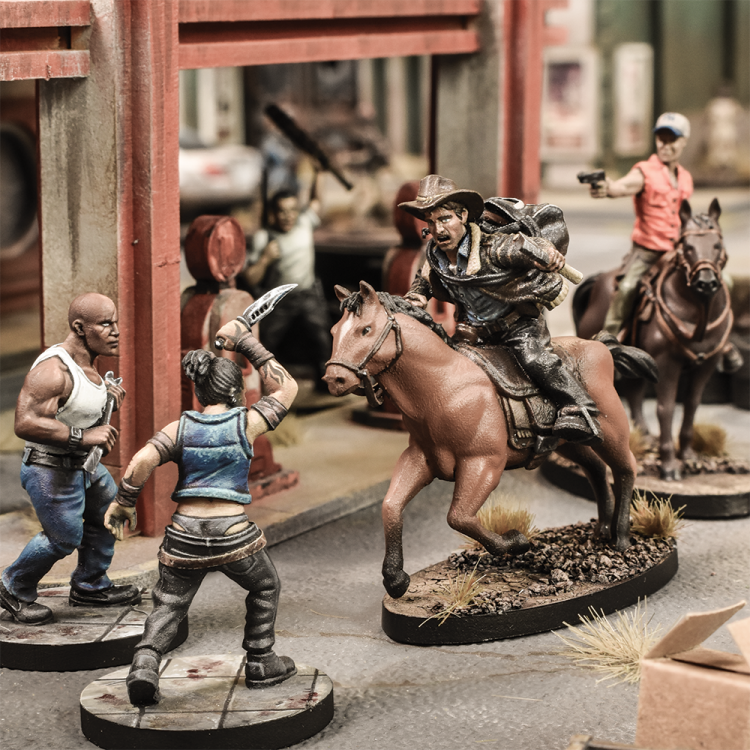 In the Event Phase you first check the ‘Kill Zone’ for each walker – a large circular template that measures to see if any walkers should move into contact with survivors for melee. You split the walkers evenly between combatants so it isn’t three walkers versus one survivor and one walker versus another if they are standing right next to each other. 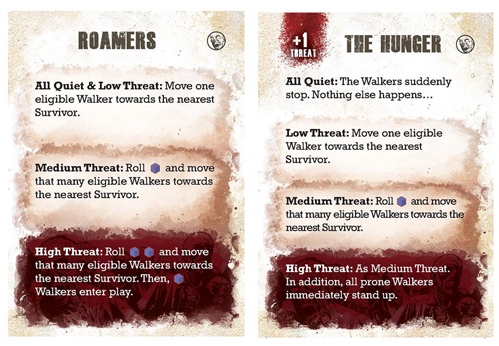 Next you draw the Event card. These will do a variety of things: move walkers toward survivors, add to the Threat level, or add more walkers to the board. You can see above it is based on each threat level that you’re in so the game gets harder as it goes along, simulating more walkers drawn to the area as fighting gets worse. 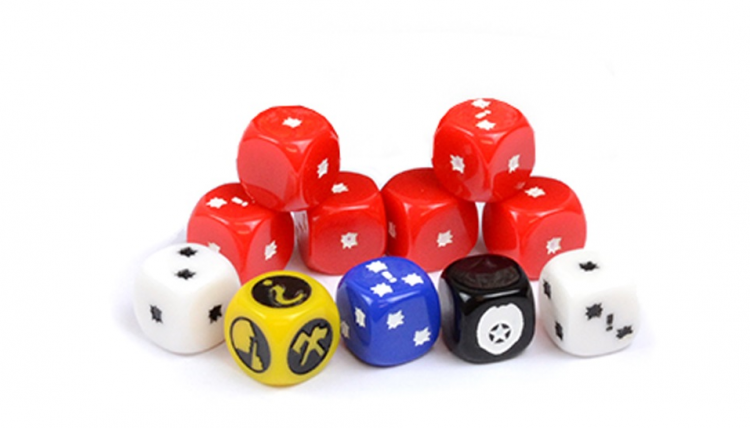 After Events, everyone does all melee at the same time. Each survivor checks their Melee Stat (Allen pictured earlier in the article has one White dice) and rolls those dice, adding any dice from weapons they have. Blue dice are the best, followed by white then red. Compare this attack roll versus a Walker’s roll of one Red (or if they group up, they start getting more and more exponentially up to a max of five each). In order to take down a Walker, you need to roll a Headshot (!) and beat the roll of the walker. If you don’t roll a Headshot but do manage to beat a Walker, they’ll be knocked prone. If you fight them again when they’re prone you can automatically kill them without a headshot as long as you beat their roll. 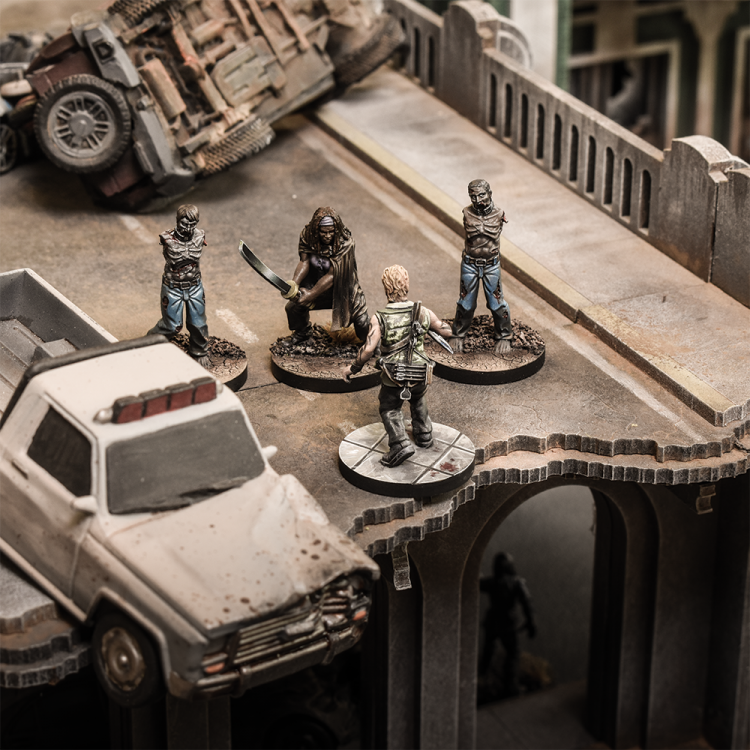 Survivors can choose to defend if they wish, in which case they use their Defense stat, but can’t do any damage to Walkers. If Survivors suffer a headshot from a Walker that means they’re bitten and could possibly become a Walker when they die from the infection!

The last phase is the End phase, where you do some housekeeping like seeing if prone walkers stand up, checking for infection damage, and raising the threat if you’re playing solo. 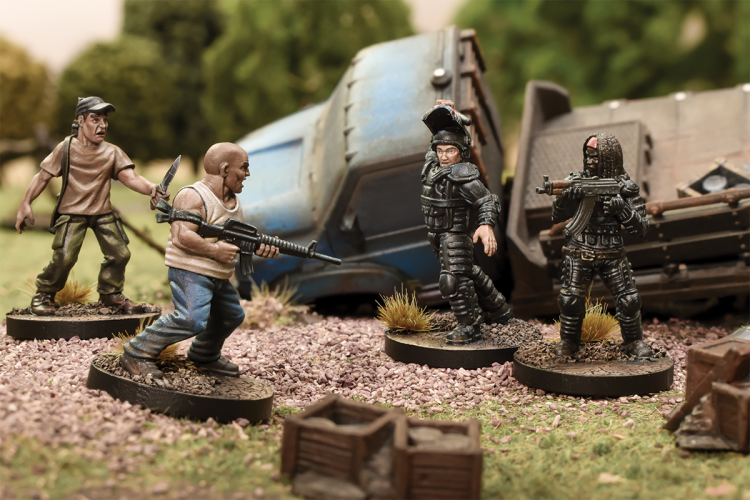 The Walking Dead: All Out War is one of my favorite miniature games. I am a huge fanboy of the universe, so this is an easy buy for me. I think if you like post-apocalyptic stuff, zombies, or comic books this could be a great grab for you as well. Like Mantic’s other offerings in Hellboy or Dungeon Saga, I feel that this game is one you could buy incrementally, painting as you go, and moving through the story so it isn’t a huge money expenditure all at once.

There are other ways to play, as well – Call to Arms is the competitive play ruleset for this universe that could be used to expand and grow a gaming group looking to do a campaign. Here’s Negan! is a board game that uses some of the same ideas to show Negan’s Saviors group clearing out the Sanctuary. With the Whisperers on the way, there is no better time to build your group and take on the walking dead!