So as you’ll see in the results below, Stormcast Eternals are still a threat and it’ll take more than a slap on the wrist from the Battlescroll update to knock them off podiums. That said, there’s a healthy mix of stuff on the podiums this week which is really nice to see. In fact, Fyreslayers were one priority roll win away from winning the Hampshire GT and really making a statement – Ritchie McAlley came fourth but I’ll highlight his list anyway because it’s new and spicy.

Let’s get to this week’s results.

A two-day, five-round event which took place at Horndean Technology College, in Portsmouth, England. It was a 113 player event and you can find the lists for this event at Tabletop.To.

We are rapidly approaching the point where the joke of ‘you could randomly generate a Thunder Lizard list and it could podium’ becomes reality – this is a pretty different take on Thunder Lizards that foregoes the comforts that such players have come to rely on in their lists in favour of Kroak, a Celestant Prime and a bunch of Snek Launchers. Darren can push the Snek Dispensers up the board pre-game and screen off his Kroak inner sanctum, and with Spellportal the big frog can make his presence known on the battlefield from a safe distance.

This doesn’t have the raw damage output of traditional Thunder Lizards lists, but the fact that their damage comes primarily in the form of mortal wounds means it’s better in the mirror match. It helps as well that Kroak can tag team with the Celestant-Prime to drop precision mortal wounds and blow up key pieces, taking apart the cogs that makes the opponent’s list work and then leaning on the Bastiladons and Skinks running interference long enough to rack up the victory points on objectives.

Let’s start with the combo – Bloab Rotspawned has the spell Miasma of Pestilence, which will do D3 mortals on a 2+ at the end of each phase in which the affected unit took mortal wounds. Bloab himself can proc the mortals in the shooting phase with his ranged profile (and the enemy’s shooting phase with Daemon-Flies), combat is pretty much guaranteed and disease rolls trigger it in the battleshock phase, but what about the hero phase? Most direct mortal wound spells are fairly short range for Nurgle, but The Burning Head has an effective 15″ range to help trigger it. At 20 points it’s a cheap inclusion that helps milk that extra bit of value out of Bloab’s amazing warscroll spell.

As for the rest of the army, it’s based around board control established by the big ol’ flies – with 16 wounds each and a 4+/5++, they’ll be hard to take down, especially when the GUO ensures they’ll be healing D3 wounds a turn thanks to Locus of Fecundity. This list won’t be winning in the combat phase, but it will play into the Nurgle gameplan perfectly of establishing early board control and grinding your opponent down through Disease points and Mortal Wounds.

*Hunters of the Heartlands
**Warlord

Fyreslayers were basically trapped in one build with their previous book, which was put under pressure with the new book. Suddenly it was a lot harder to keep the 4+ Ward on the Hearthguard while having any kind of aggressive game plan. That said, the Hearthguard’s loss became the rest of the books gain, as Vulkites became a compelling and efficient choice to trade with (and they need to be killed outright or they will rally very efficiently with the battlesmith). The other element of the books that’s come into play with this list is how much more respectable Magmadroths are nowadays, putting out high quality attacks and bouncing back a lot of mortals when making saves in melee. With 18 wounds, a 4+ save and likely a 6+ from one source or another, they are reasonably tough too and won’t easily be shot off the board before they start closing in on your opponent.

For slapping, the Runefather has Blood of the Berzerker and Axe of Grimnir, which when combined means he can not only fight twice, but the Runefather himself contributes an impressive four damage 4 rend 2 attacks, which he can pump even further with his once per game ability to give +1 attacks to everything WW 12″ of him (including himself).

It’s an interesting spin on Fyreslayers and reports on the ground suggest he was one priority roll lost away from winning it – hell yeah Ritchie!

Let’s round out the rest of the top 8:

A two-day, five-round event in Adelaide, Australia. You can find lists for this event at Down Under Pairings.

Perhaps the most interesting element of this list is how it’s invested in mobility for it’s Battleline – Spoor Trackers let’s all his Zombies and Dire Wolves near the general move 3″ at the start of the hero phase, which has sneaky utility in that as it’s movement that happens outside of the movement phase, your opponent can’t redeploy to try and get away from them. That combined with the Zombies natural ability to activate and pile in from 6″ away and pile in 6″ means you can set up some rather nasty activation chains that really constrain your opponent’s ability to freely move around the board, which sets things up nicely for Prince Vhordrai and Radukar to roam and pick apart your opponent’s army.

Belladama brings serious spellcasting utility with her warscroll spells, yeeting Dire Wolves at problematic ranged elements to shut down shooting and powering up the chaff to hold their own in a fight. It’s a smart list that really maximises some of the strengths of the faction. 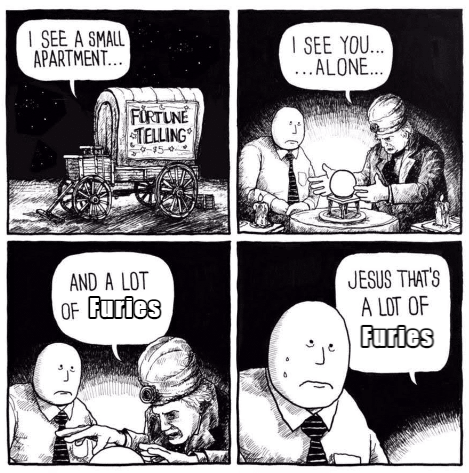 Sam’s a bit of a maverick in the AOS scene, as he’s previously been running Skaven lists that run over a 100 gutter runners and other such nonsense. He’s a control player, who wants to screen the board with loads of cheap chaff and win by making your opponent chew through more bodies than it can handle, combined with select hammer pieces to score battle tactics and tip the scales in key combats.

Enter Furies, whose main features are:

These three things together make a nightmare for your opponent when spammed, as they can basically act like a bunch of annoying gnats making it impossible for your opponent to get out of their deployment zone while the list quietly starts churning out Plaguebearers and/or Horrors every turn (or in fact more Furies!). The Khorne DP is here to pop down bloodslicked ground to make charges a ludicrous proposal for your opponent, and the whole thing just looks exhausting to play against.

A five round, two day event that took place in Indianapolis, USA. Lists were pulled from BCP.

It’s got a bit of everything really – Legion of Night means he can deep strike stuff to get more mobility and board control options, he’s brought a lot of different units that can all contribute in combat in a pinch, and of course Mannfred really comes alive in his own Legion, and acts as a lynchpin that makes the rest of the list so much better for his inclusion.

The VLoZD is of particular interest, because it’s combined Terrifying Visage and Shard of Night to make a rather tough little combat monster. The former bestows a -1 to wound penalty to all melee attacks trying to slay him, and the latter makes him ignore rend when making saves against Ranged Attacks. Such an effect does not do much good against mortal wound shooting, but we’ve started to see a subtle shift away from those style of units anyway with the downturn in LRL popularity. This all bodes well for the VLoZD, who is much more likely to stick around for longer and tagteam with Mannfred for some flying Herohammer fun.

Idoneth excel at frustrating armies that lean on their shooting capabilities, as their allegiance abilities mean that Idoneth units can only be targeted with ranged attacks if they’re the closest eligible target to the attacking model. Enter the Loreseeker, who can go into reserves during deployment and then get placed anywhere on the battlefield outside of 3″ if enemy units and not in your own territory. So he immediately becomes the closest target for your opponent’s entire army and then must be dealt with before you can even begin to deal with the other 1800 points of Idoneth brutality.

It’s a sneaky elven trick, and it’s at his best here with this list opting for 1 drop battle regiment, ensuring that Jon often has control over who goes first so can happily give first turn away secure in the knowledge that in shooting matchups he has a significant edge and can bide his time for good opportunities to commit.

It’s been really intriguing how varied the lists have been the past few weeks, with the old guard fighting to regain their dominance amongst a more varied field that promises new lists in response to listbuilding challenges presented by the metagame. Idoneth and Fyreslayers both provide new challenges that may shoulder out some of the old favourites, and Big Waaagh continues it’s impressive win rate even as more and more players decide to pick them up to see what the fuss is about. Cya next week for more!