Competitive Innovations in the Mortal Realms: Landing on the Jail Space

As mentioned a few times over the previous few weeks, June/July is a bit of a lull period in the AoS tournament scene as things shift from one season over to the next. As a result, there were *no* tournaments worldwide that met our threshold for a major tournament (5 rounds, 28 players) over the previous weekend. That’s not to say that there wasn’t tournament games happening, so I’m going to take this week to pick out some of the cool lists I saw when browsing through tournament results from the past weekend.

A quick note before we continue, Ronya Andersson won the Worlds tSports Champions Event this past weekend, which was playing using GHB2021 rules. For those unfamiliar, invites were sent out to the top 16 players globally to come to Nottingham to take part in an invitational event (with invitations going to the next ranked player if the invited player declined for whatever reason). While it was a small field of players, it was packed with very good players and high level play. Ronya took the following list:
Ronya's List - Click to Expand

Grieving Legion hasn’t been the darling pick amongst the NH community, with most bitterly arguing as to whether Emerald Host or Scarlet Doom is the best (while Quicksilver Dead yells obscenities in the background). To those not in the know, Grieving Legion shuts off retreat for enemy units while they’re within 3″ of any NH units with 10 or more models. It’s an extremely powerful effect that is a little trickier than you might think to keep enabled when you consider that it’s actually quite difficult to have many horde units in your NH army without running into some serious points issues. That said, Ronya shows her mastery of all things spooks by utilising this overlooked subfaction combined with Grimghast Reapers, who in units of 20 can trade blows with most units in the game and do quite well for themselves. Why? Well they’re just kind of generically efficient, 4+ ethereal save, access to a 5++ ward, bucketloads of rend 1 attacks. Olynder and Kurdoss act as hammer pieces that can do well for themselves in their own right, with Olynder in particular able to replenish models back into every unit in the army thanks to her once per game d6 models replenishment ability, No Rest for the Wicked. That said, as the army was written with GHB2021 in mind it felt a bit odd to linger on this tournament and let’s instead take a look at what early going listbuilding looks like in the world of Gallet.

Let’s start things off with a warp-fueled bang – John B won From the Ashes 2022, a 22 player event with the following:

Our first look at a successful GHB2022 list, how exciting! This list went 5-0 with a Expert Conquerors list that goes as low as it can reasonably go (3 drops with a BR) in order to likely control turn priority from the offset against the many Bounty Hunter lists running around while still enjoying the benefits of Expert Conquerors. So how does it work? Well the Clanrats are going to put up deckchairs on the objective and hope nobody notices them, while the real bloody work is done with some appalling firepower from the books more elite sections… Let’s start with Thanquol, who can hurtle up the board with Skitterleap *or* Lauchon the Soulseeker depending on how fast he needs to be, and then absolutely nuke an unsuspecting unit with 4 Warpfire Projectors. It won’t be incredibly potent against very elite units or heroes, but against anything with 3 wounds or less it could potentially wipe the entire unit out in an instant, ouch. Adding on to that is his general proficiency as a anti charge deterrent (helloooo Unleash Hell on him *and* a nearby Stormfiend unit), a very proficient spellcaster as well as just generally being annoyingly tanky and difficult to kill. Acting as the second almighty hammer in this list are six Stormfiends, who are a little bit less consistent in the new book (thanks to the loss of rerolls) but almost as devastating in the shooting phase when supported by an Skryre hero (which is here, of course) and that much better placed to do good work now that the floor of the rest of the book has been lifted up a bit. They’ll get tucked into deep strike with the Warp-Grinder to ensure they can dodge any initial blows before they get the chance to unleash a devastating combination of damage 2 Ratling Cannons and damage D3+1 Windlaunchers. It’s the kind of Skaven build that’s been around since their 2nd edition book, and it’ll be interesting to see if it can thrive in what is assumed to be a heavy bounty hunters world. What helps here is that the big beef that appears out in front can help take attention away from the lowly Clanrats, who can then win handily in the objective control department if they only have to trade blows with other armies’ chaff.

Double chicken in the no retreat subfaction where everythings rerolling casting and unbinding AND there’s an Incarnate? But wait, there’s more! The new super charged endless spells make great companions for the spellcasting juggernaut that is Tzeentch, with Kaleb opting for the soon to be everywhere Purple Sun of Shyish, along with Ravenak’s Gnashing Jaws to act as damage dealers (and Umbral Spellportal because DUH). It’s also gone for *zero* Daemon infantry, as it needed to go budget on it’s battleline in order to afford the big boys, the big toys AND the Incarnate all at the same time. That said, the Incarnate makes for an interesting companion for the chickens, as it’s a threat that can’t just be yeeted off the board turn one and blown past – you can’t retreat near it and it WILL last a minimum of two turns, which might be all that’s needed for the sheer amount of ranged mortal wounds this list is capable of putting out to pick apart crucial support pieces and help turn the tide. One last note before we move on – another list that skipped past the temptation of Expert Conquerors and Bounty Hunters, which makes sense for this list as it absolutely wants to control priority, especially when it can just give turn 1 away against melee armies that can’t appreciably touch him turn one, or seize the initiative and go first against synergy based armies that this army is more than capable of picking apart at range. 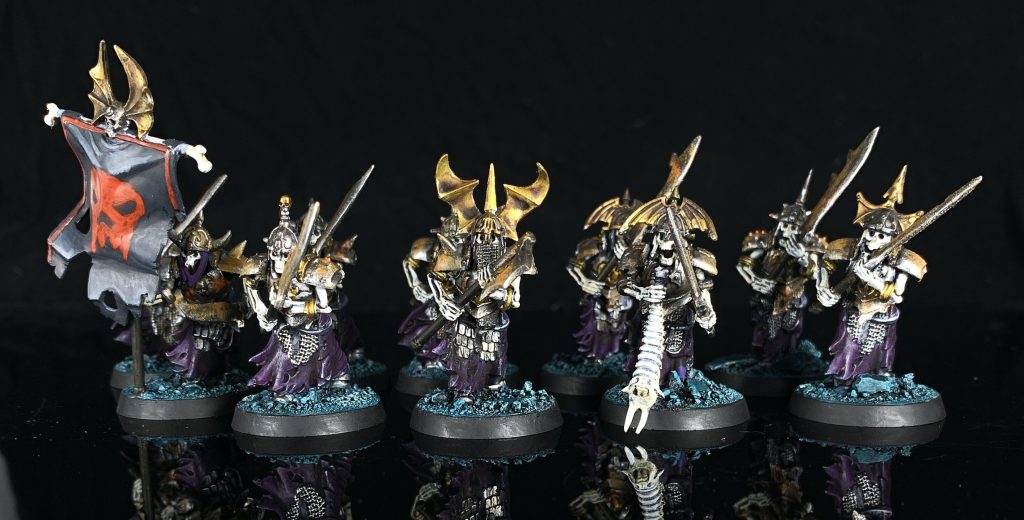 Bryan Lofton came 2nd with a 3-0 record (missing out on top spot to a pretty boring looking Morathi and Snake list that just crammed everything into a Battle Regiment) at the Wonkos 2k Tournament, a 20 player 3 round event.

I’m going to blow past the hero section as it’s what we expect from successful SBGL lists (though notably this list is in Legion of Night for Morbheg’s Claw – an artefact to make for his magic more optent) and focus in on the troops section, as this is where the impact of the new battalions starts to make itself known. 20 Deathrattle Skeletons and 20 Grave Guard in Bounty Hunters, a total of 80 Zombies in Expert Conquerors. The former are hammers (though admittedly the Skeletons are likely here because he *needs* at least two units to go in the battalion to make it legal) and the latter are extremely annoying anvils that will be hellish to outright kill and make them VERY difficult to take objectives from – a unit of 40 counts as 120 on an objective! This kind of area control list is going to give a lot of problems to lists not capable of putting out some serious damage, and it’s going to be interesting to see how much armies will lean into Bounty Hunters to try and counteract this kind of threat.

So we’ve not seen any Bounty Hunters heavy lists make a splash yet, but it’s early days and as you can probably tell from the slim pickings of this week, we suspect a lot of this is down to players furiously practicing away in the shadows, hoping to crack the filth of the new season for when big tournaments begin again in earnest. See you next week!

If you have any questions or comments leave one down below or email us at contact@goonhammer.com.