Goonhammer Reviews the New Releases for Walking Dead All Out War

Mantic Games is continuing to release new models and content for The Walking Dead: All Out War. Originally Kickstarted in 2016, the game has followed the comic books (not the show), releasing new models, terrain, and scenarios for each different part of the story. Mantic is nearing the end-ish of the story, having completed the All Out War with Negan’s Saviors and most of the Whisperer War. This new release fills out The Kingdom faction, a community led by Ezekiel. Ezekiel is a former zookeeper who now larps as a King (and everyone in the Kingdom plays along) and has a tiger pet, Shiva. 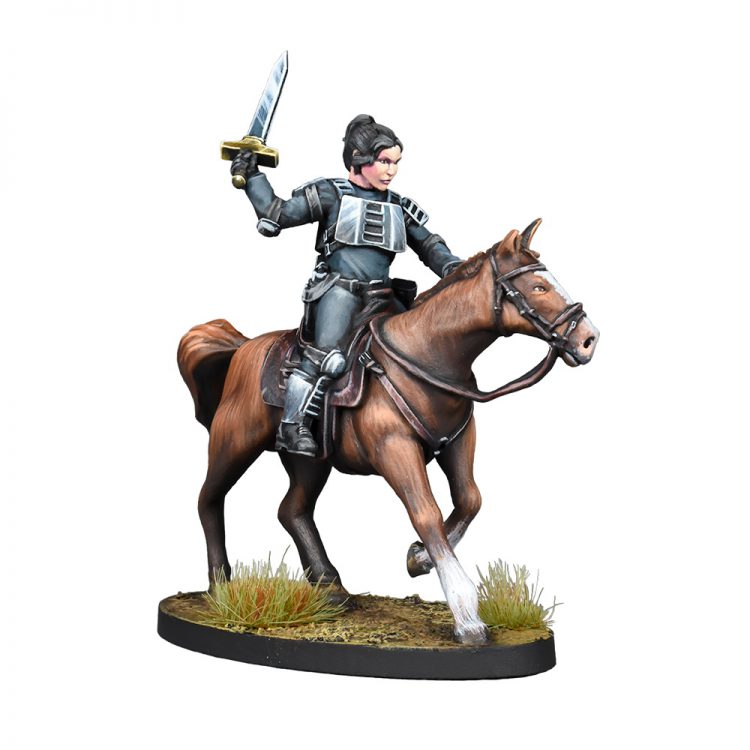 Included in the Kingdom release are five mounted models (Gus, Benjamin, Taylor, Kingdom Guard 1, and Kingdom Guard 2) and one dismounted model (Richard). Previously TWD had three mounted models, so this makes a big addition to the game. Mantic has converted to all resin starting with Wave Six, and these models are definitely some of their best resin models produced. The only issues I’ve had are clipping the models from the flash – all of my horses’ tails fell off. Mold lines were pretty comparable to any resin models I’ve purchased before. 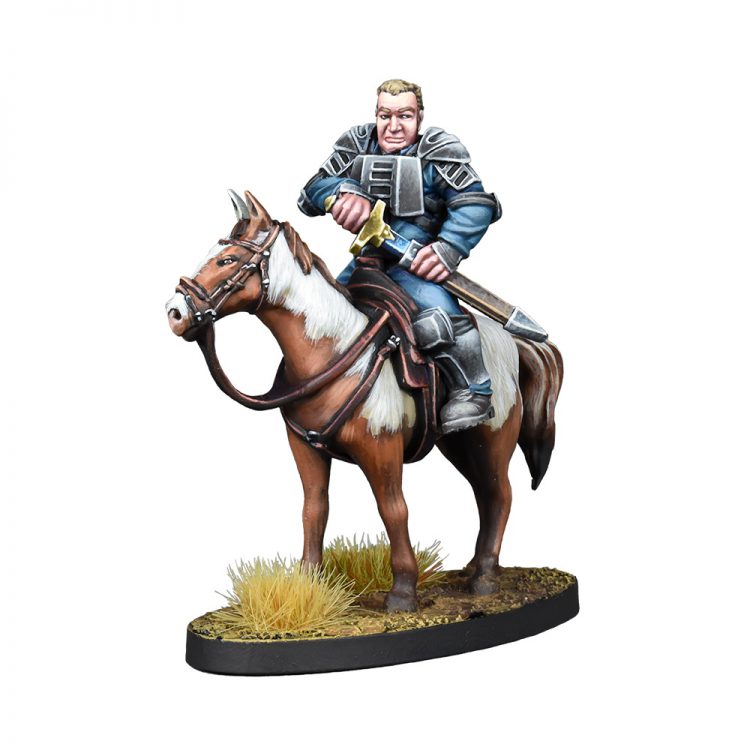 The horses are sculpted well and scaled well; the humans scale just fine with the rest of the range. I glued the riders onto the horse before I primed them as I hate painting in sub-assemblies. There were a few minor places I had to green stuff where the rider connected with the reins in the front of the horse, but otherwise it wasn’t bad. The level of detail with these resin minis is great – the hard plastic ones they had been doing were on par with most other companies’ offerings, but the resin adds just a little bit more detail and crispness to each model.

If you’re like me and wanted to be able to use more of the generic Kingdom Guards, you might consider conversions with them. I bought an extra box and swapped their weapons with weapons from other kits I had laying around, giving them a different melee weapon and gun. I also swapped heads with another kit – not sure where I found them – but most heroic 28mm heads will work fine. This gives them a bit of a different look. 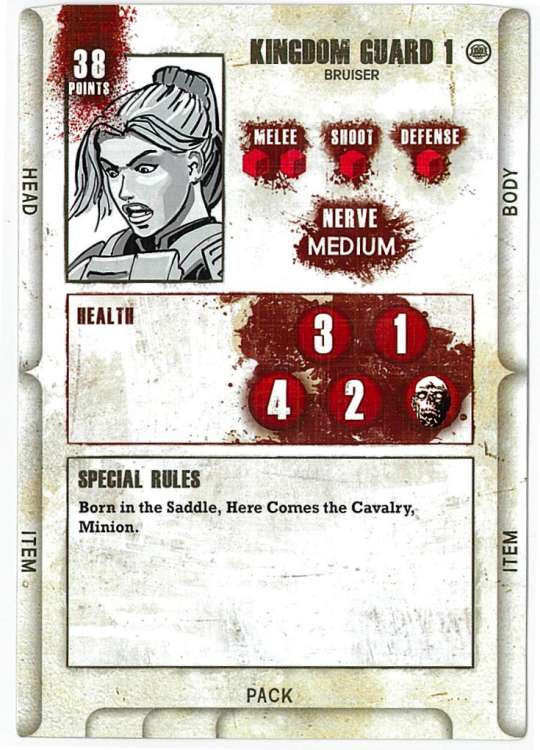 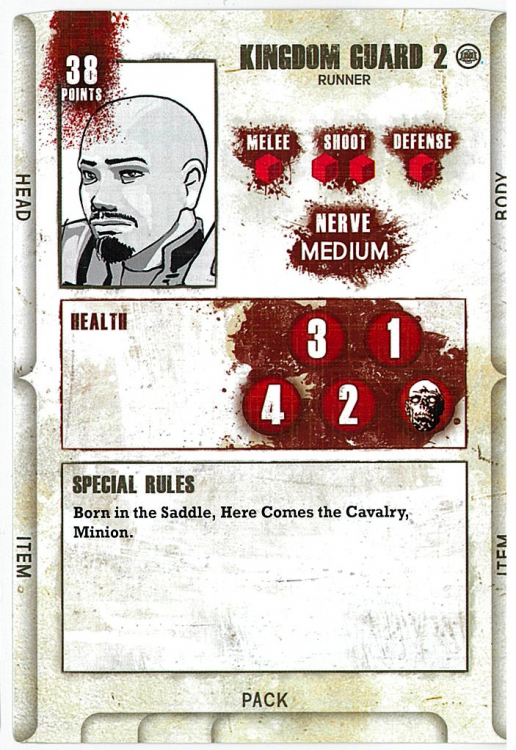 With the release of the Whisperers, Mantic started creating models that were generic – they could be used in numbers, instead of all one-off characters. The Kingdom receives that treatment here with a box including Kingdom Guard 1 and Kingdom Guard 2. This pads out a faction that didn’t have a ton of characters named in the comic books. For these models we have one that is better at shooting and one that is better at melee, which is fairly standard. They seem rather heavy points-wise but they come with Born in the Saddle, which grants them a Horse, usually a 20 point upgrade. They also have Here Comes the Cavalry, granting them an additional Red die when they make a melee attack in the same Kill Zone as another mounted friendly model. 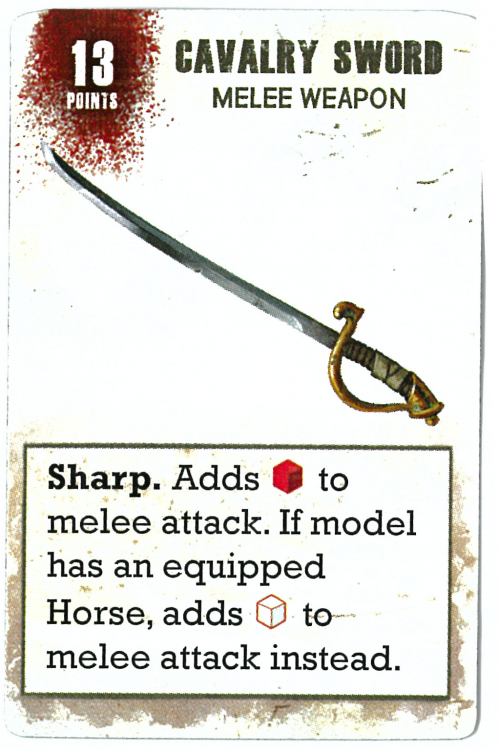 Equipping Kingdom Guard 1 with the Cavalry Sword gives you a 51 point character that rolls four Red and one White die when attacking near a friendly horse rider, making them very deadly in close combat. You’ll want to keep your cavalry at least in pairs to benefit from that rule and also make sure they don’t get surrounded. You won’t have a ton of models since they’re relatively expensive, but I feel like putting the generics as bodyguards for your named characters will go a long way towards being successful. 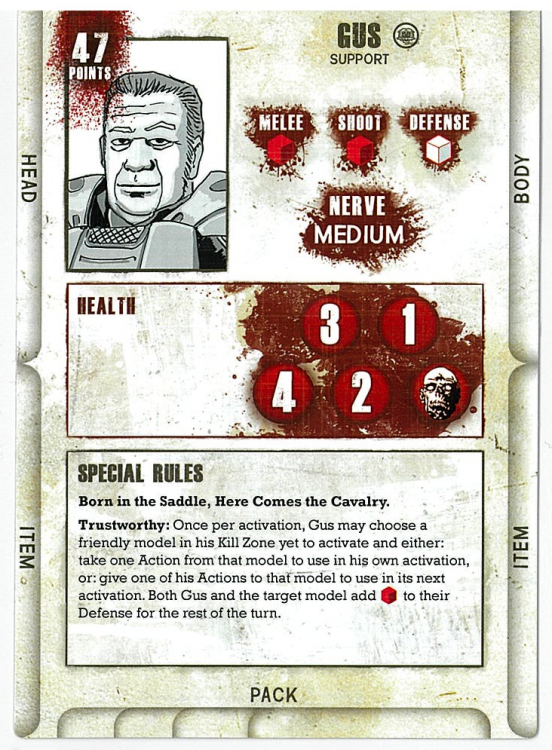 Gus is going to be a staple in Kingdom lists because he’ll be a good bodyguard, having good defense, but also because he can grant extra actions to other cavalry around him. I imagine giving him bandages or another medical item and then running him alongside, giving extra Defense and actions. It seems like a great way to boost the heavy hitters in your group. 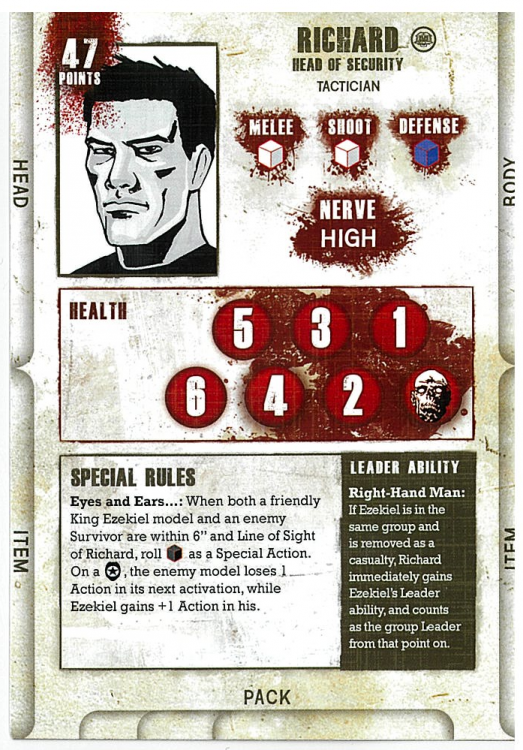 Richard is actually the only model in this release not a horse, but he’s still great. He has six Health, two higher than the others. His stats are exceptional – 1 White in Melee and Shoot, and 1 Blue in Defense, providing another tanky model to a pretty tanky faction. It may be worth investing in a horse for this guy so you can get him across the board with the others, but you’d also want to horse up Ezekiel then as well because Richard’s special rule Eyes and Ears… interacts directly with Zeke. 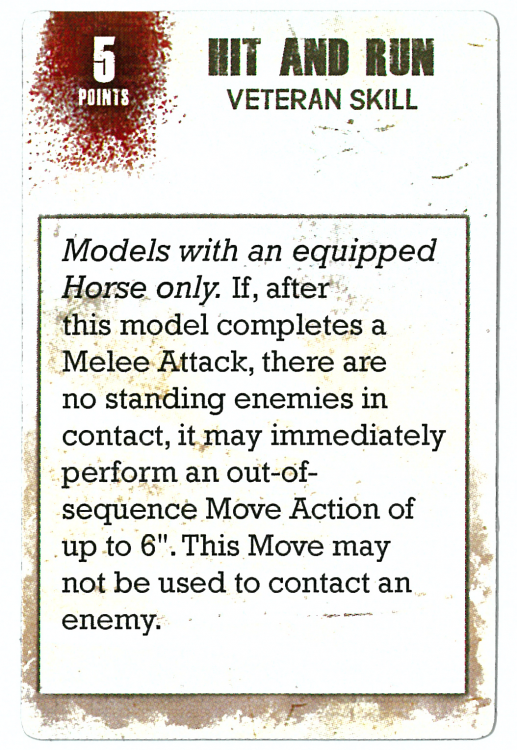 Besides the models, there are items and veteran skills included as well. I like Hit and Run because it gives your cavalry even more mobility. Move up, fight a walker and knock it down or take it out, and then keep moving. You’ll be across the board and flanking enemies in no time. For five points it seems like a great way to finish a list. 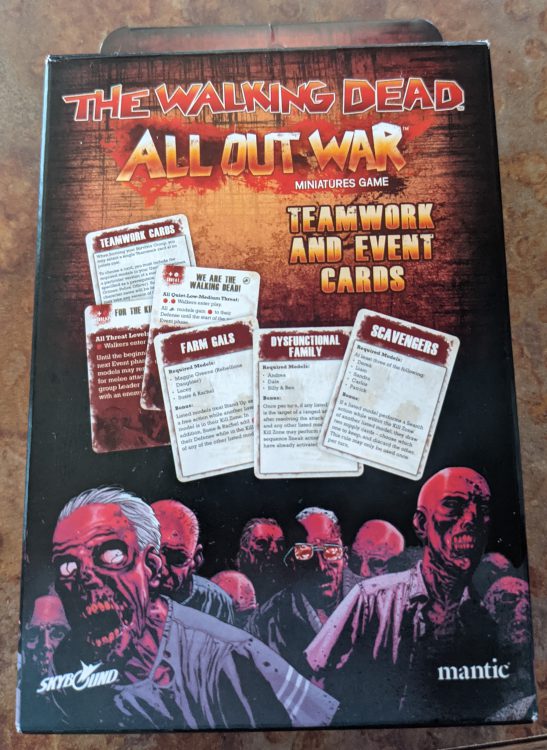 The other part of this release are the Teamwork and Event Cards. These are 41 brand-new cards that help flesh out the game and add new angles to it. They are the standard MTG size cards and will go into your binder nicely with the rest of the cards you have for the game. 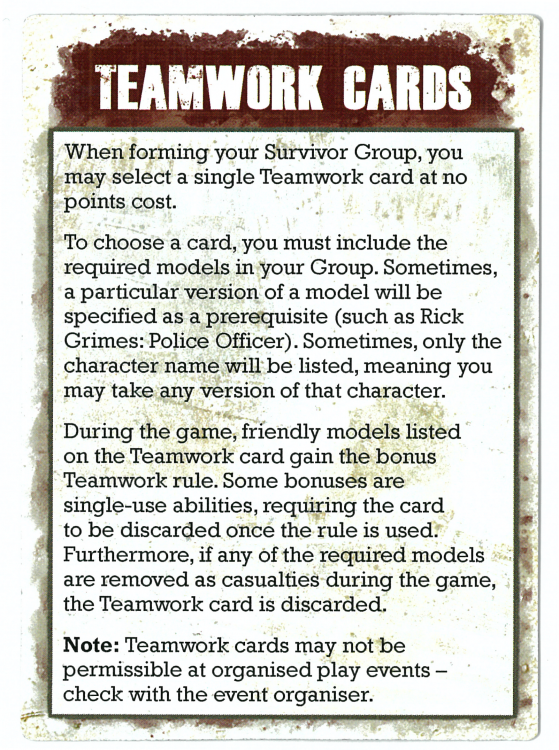 Teamwork cards fit in nicely as a small boost but not something that skews a force tremendously or changes how the game is played. You can take one Teamwork card for free as long as you include the models noted in it. I’ve looked through all of them and many of them add new elements to the game that aren’t just adding a currently existing special rule or giving bonus actions. 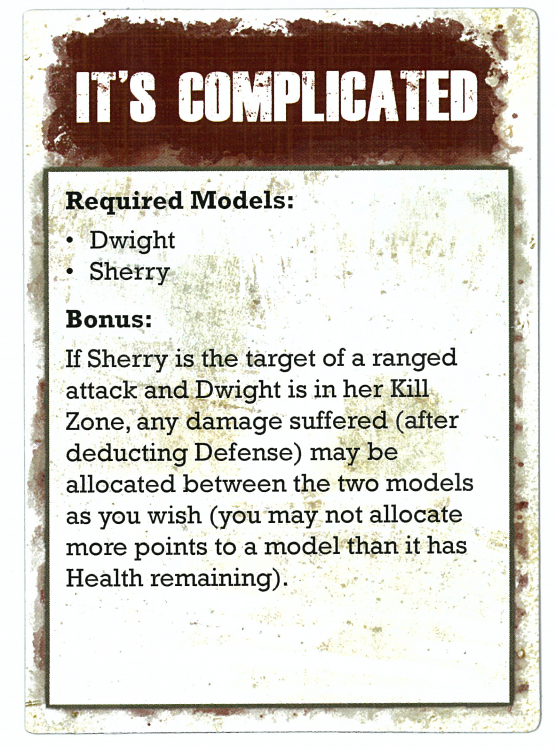 Dwight is my favorite character in the comic book so I had to spotlight this card. This is a very interesting mechanic, one I don’t think has existed previously in the game. It’s interesting that it is only for two of the members of the Saviors, not the entire group. This allows you to keep the two of them alive longer and definitely shows how tough their relationship is. 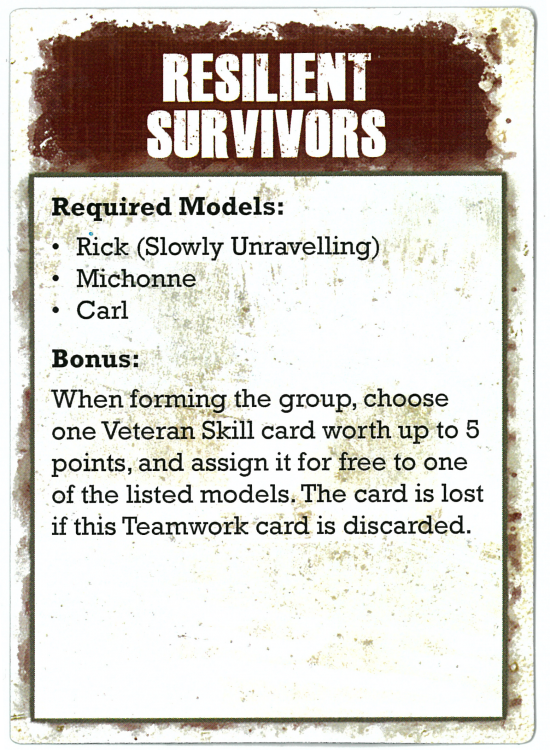 There are also cards that affect your list building. In this case you get five free points by putting a Veteran Skill on one of your models. The card is discarded if any of them are removed from play, so you have to keep the others alive as long as you can. Five points is not a huge boon – but there are other cards such as Desperate Housewives that makes your children models (they have the rule Just a Kid) half the normal points cost. That’s pretty cool, albeit not a huge game breaking thing, because most models with Just a Kid are not heavy hitters. 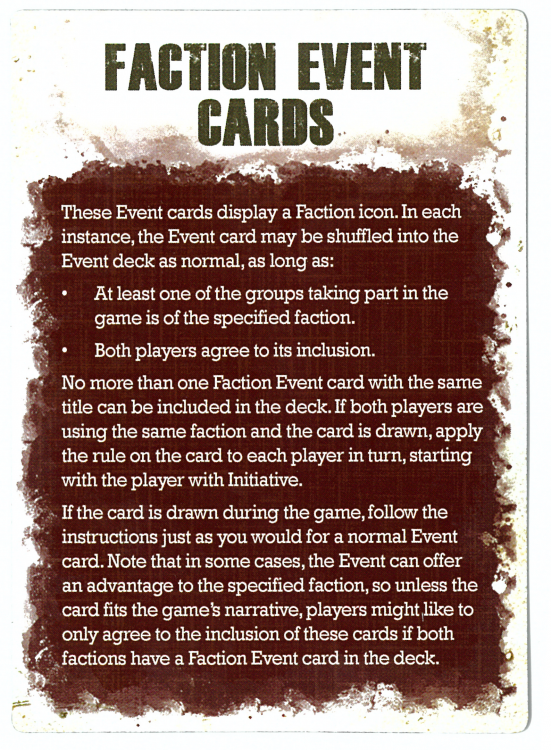 Also included are Faction Event Cards. These are Event cards with Faction icons in the corner. I imagine after playing All Out War for years with the normal Event cards the Event Phase can get more predictable, so adding these in definitely adds a layer to the game. Currently there are Faction event cards for The Whisperers, Rick’s Group, Woodbury Army, The Hunters, The Saviors, The Hilltop, and The Kingdom. Hopefully with future releases we’ll se new Event cards for new factions as well. 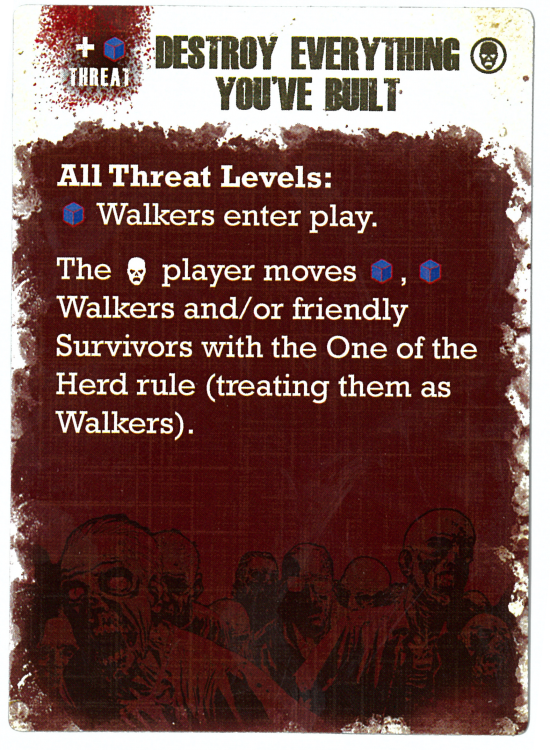 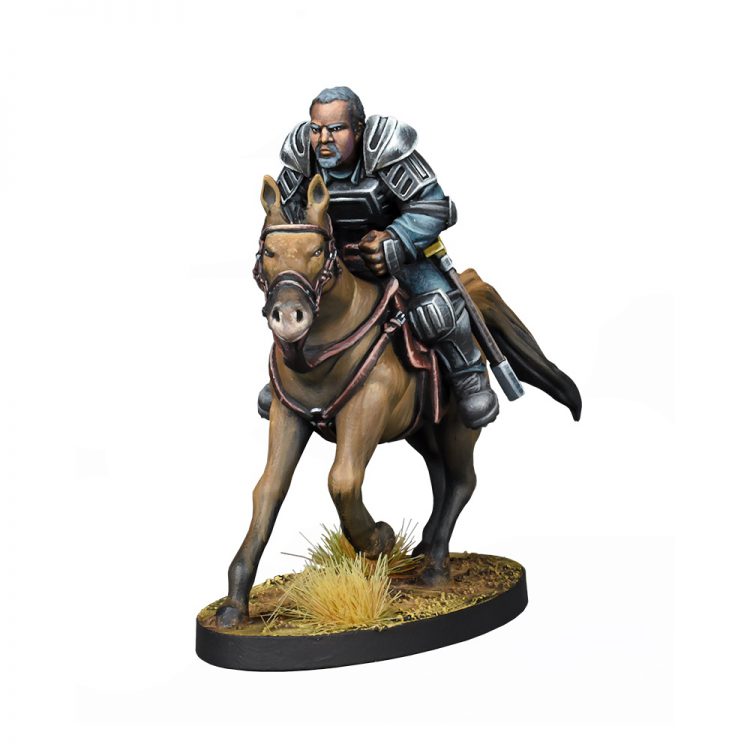 If you’re a fan of The Walking Dead I would definitely pick up the new Kingdom releases as well as the Teamwork cards. The Kingdom brings a new aspect to the game – a mostly or all-mounted force, hitting hard and then moving out of the way. Previously we’ve just had King Ezekiel basically as an ally model for other groups, so having him now in the game and able to lead a force in the Whisperer War is very cool. The models are great, made out of resin with not a ton of cleanup work required. The flashing was a bit cumbersome, causing me to have to glue some tails back on, but nothing an average hobbyist should have difficulty with.

The Teamwork cards also bring something totally new to the table – small bonuses that are included if you build your force a certain way. I think they’re very interesting and while some cards are more impactful than others, they’re definitely story-driven and will lead to new play styles. The only thing I didn’t like was that some forces have very limited Teamwork card availability – I hope Mantic makes more in the future. The Event cards are again another way to add a layer to your game. For $20 I think it’s definitely worth your cash, especially if you’ve been hammering The Walking Dead: All Out War since release, as it’ll change up the game a bit.