This week’s Hammer of Math returns to the Mortal Realms to look at Dracothian Guard weapon options.

Age of Sigmar is really growing on me. The rules look fun. The units look fun. If it weren’t for my crushing backlog I’d probably pick it up. In the interim I’m having a wonderful time working with the AoS crew here to answer some questions about various units and their effectiveness. This week we’re looking at Dracothian Guard.

For the uninitiated, Dracothian Guard are what happens when you take a fantasy Space Marine and put them on top of a four legged dragon thing. Think of it as the equivalent of a Space Wolf riding a Thunderwolf, but in a universe where such a thing would actually make sense. There are three variants; Concussors, Desolators, and Fulminators. All three ride a Dracoth which gives access to a Stormblast ranged attack which deals 1D3 mortal wounds if you hit on a 4+ and 3 melee attacks courtesy of Claws and Fangs.

I used the latest version of my AnyDice program for this, and you are welcome to check it out for yourself.

First up are the Concussors, which cleverly enough are equipped with a Lightning Hammer. The Lightning Hammer has the same profile as the Claws and Fangs that every Dracoth comes with; 3 attacks that hit and wound on a 3+, have -2 Rend, and deal 2 damage. The difference is that the Lightning Hammer also have the Blast to Ashes special rule, which automatically inflicts 2 mortal wounds on an unmodified hit roll of six and then ends the attack sequence. The chart below shows the wounds, with one caveat. AnyDice calculates results based on sequences of numbers, and it’s very challenging to add a circumstance where an attack deals mortal wounds and ends. As a result the charts below are off by about 3% for the Lightning Hammer attacks. The bottom line is that Lightning Hammers are a very reliable source of damage, averaging at least 2 wounds against even a target that saves on a 2+. 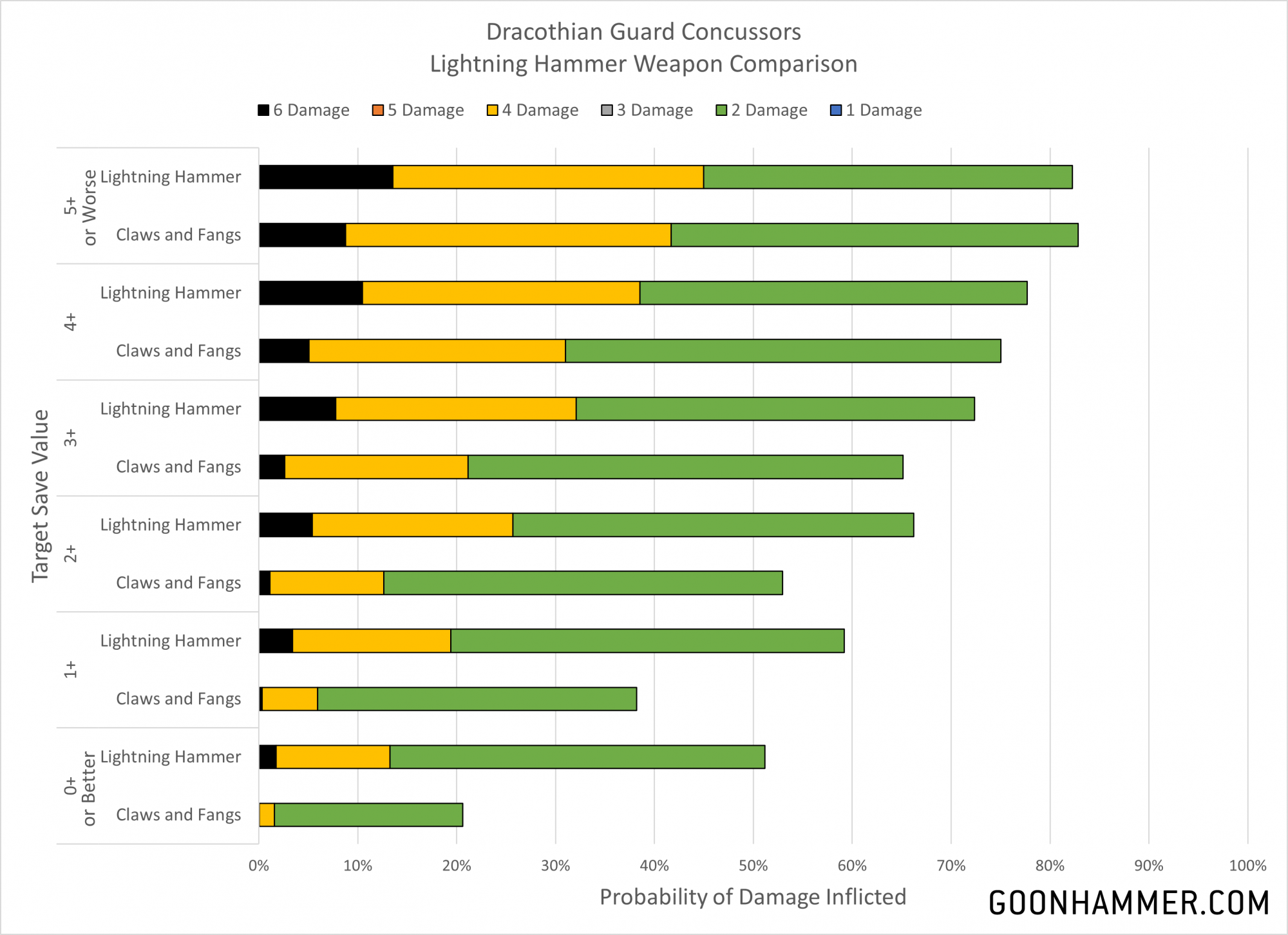 The Desolators do not have any kind of weapon-related name. One would think that a unit equipped with a Thunderaxe would have allegories to thunder or lightning, but instead they have to settle for getting 5 attacks that hit and wound on 3+, have a Rend characteristic of -2, and deal 1 point of damage. If the target unit is greater than the number of models in the Dracothian Guard unit then the Cleaving Blow ability provides an extra 2 attacks. 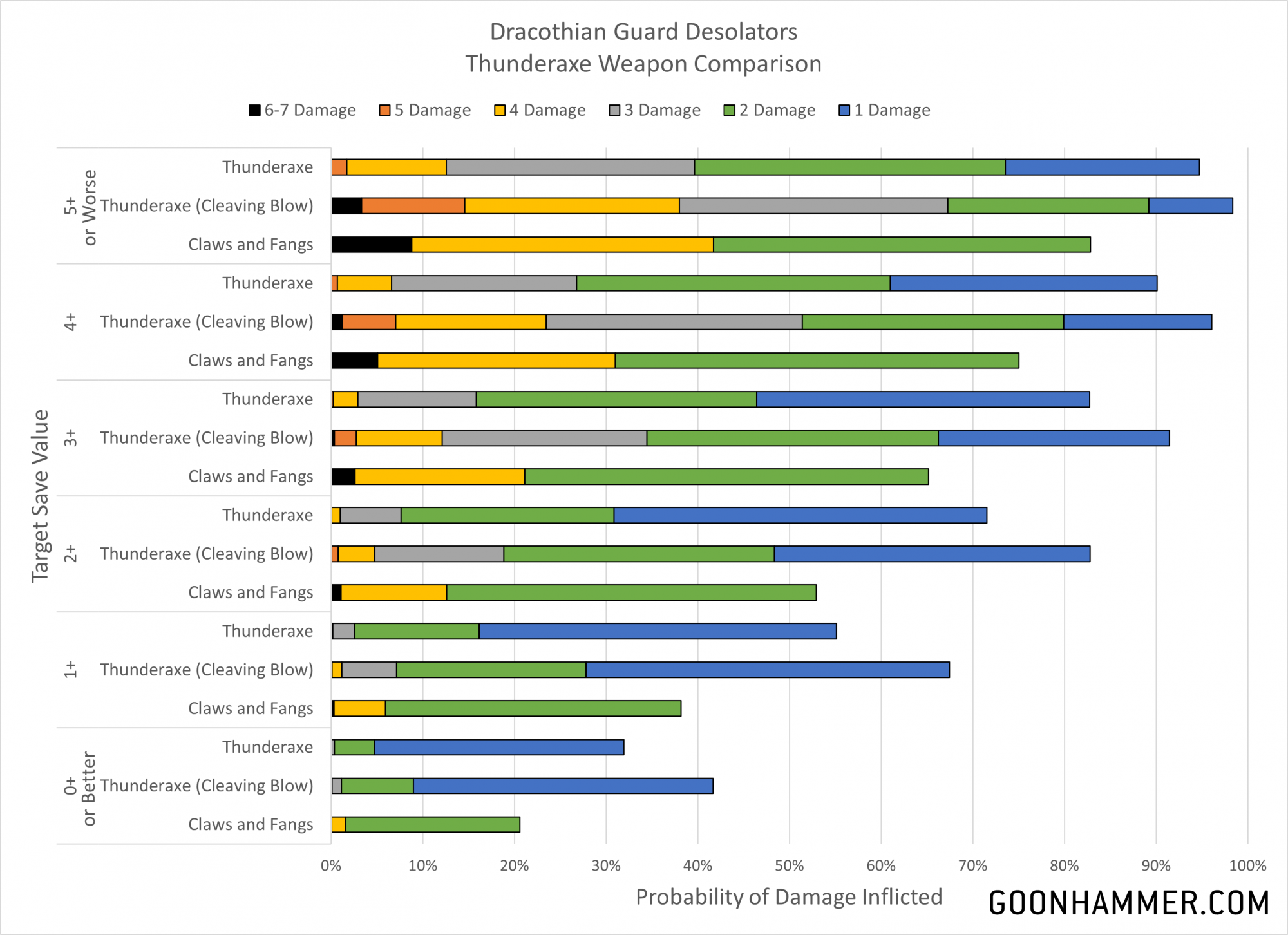 The definition of “fulminant” is “coming on suddenly and with great severity”, and that description is particularly apt given what the Fulminator’s weaponry. The Stormstrike Glaive has 5 attacks with a 3+ to hit and wound, a Rend characteristic of -2, and a base damage of only 1. However on the charge the Fulminators can use their Impaling Strike ability to change the Damage characteristic from 1 to 3. Tripling the damage in AoS is particularly devastating thanks to how damage is transferred between models, meaning a charge by a pair of Fulminators could potentially kill up to 30 models in a single strike. 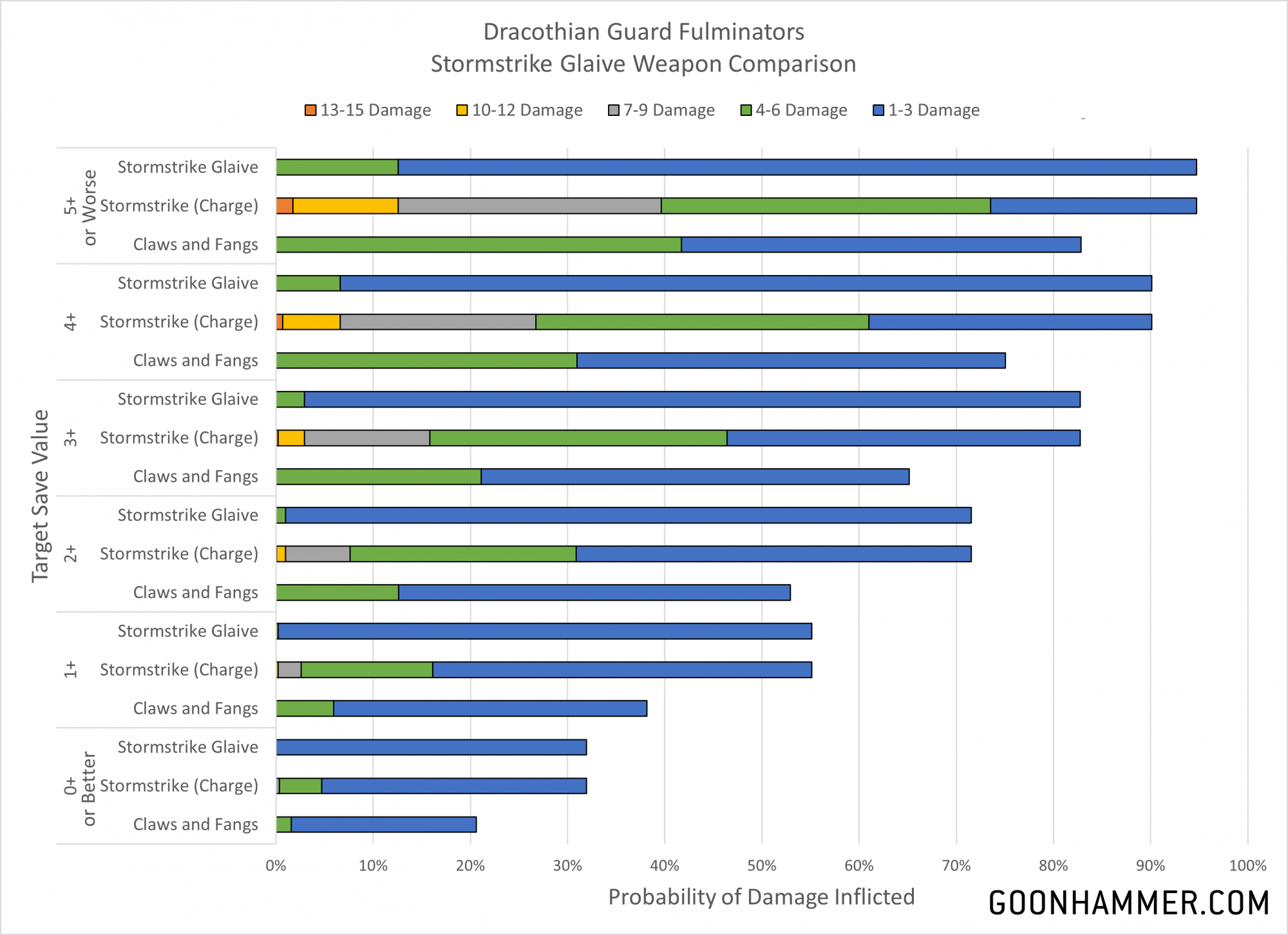 One of the biggest challenges of doing any kind of weapon analysis is understanding the context in which the units will be used. How often will a particular unit charge? How often are they going to dive headfirst into a unit that’s larger than them? If we start with the baseline below it’s apparent that the Lightning Hammer is the superior choice thanks to the high damage and possibility of mortal wounds. The profiles of the Thunderaxe and Stormstrike Glaive are identical so as expected the baseline weapon output is also identical. 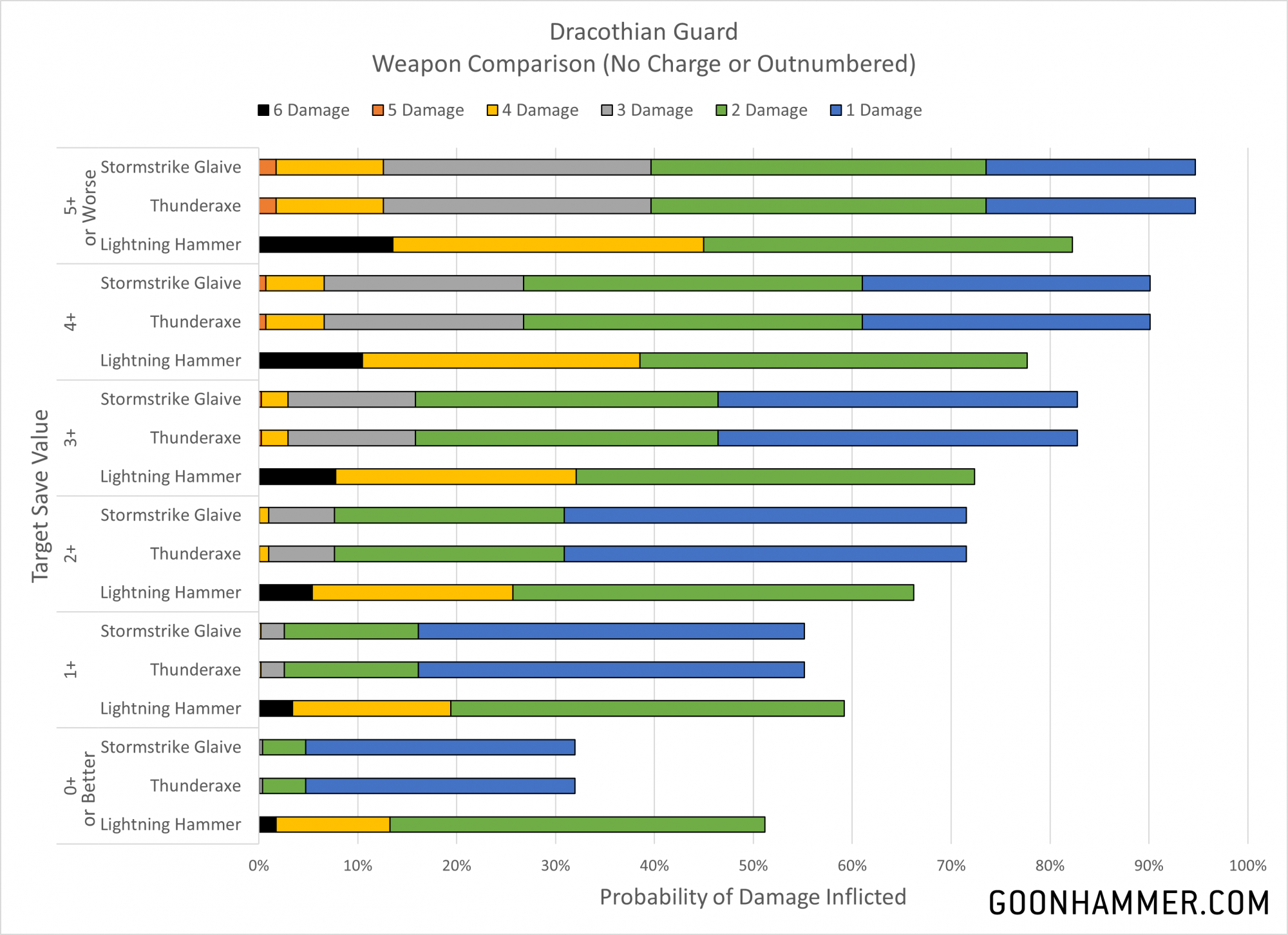 What happens if we look at situations where the weapons can use their benefits? The Lightning Hammer is unchanged since its ability is always used, but we can see how the Thunderaxe and Stormstrike Glaive change in the chart below. The first takeaway is that the Lightning Hammer is better than the Thunderaxe even against larger units; the additional damage and possibility of mortal wounds simply makes it more effective. The second is that the the Stormstrike Glaive on the charge is significantly better against every save except for one; when the target is guaranteed to save on a 2+. In that situation the Lightning Hammer is slightly better. 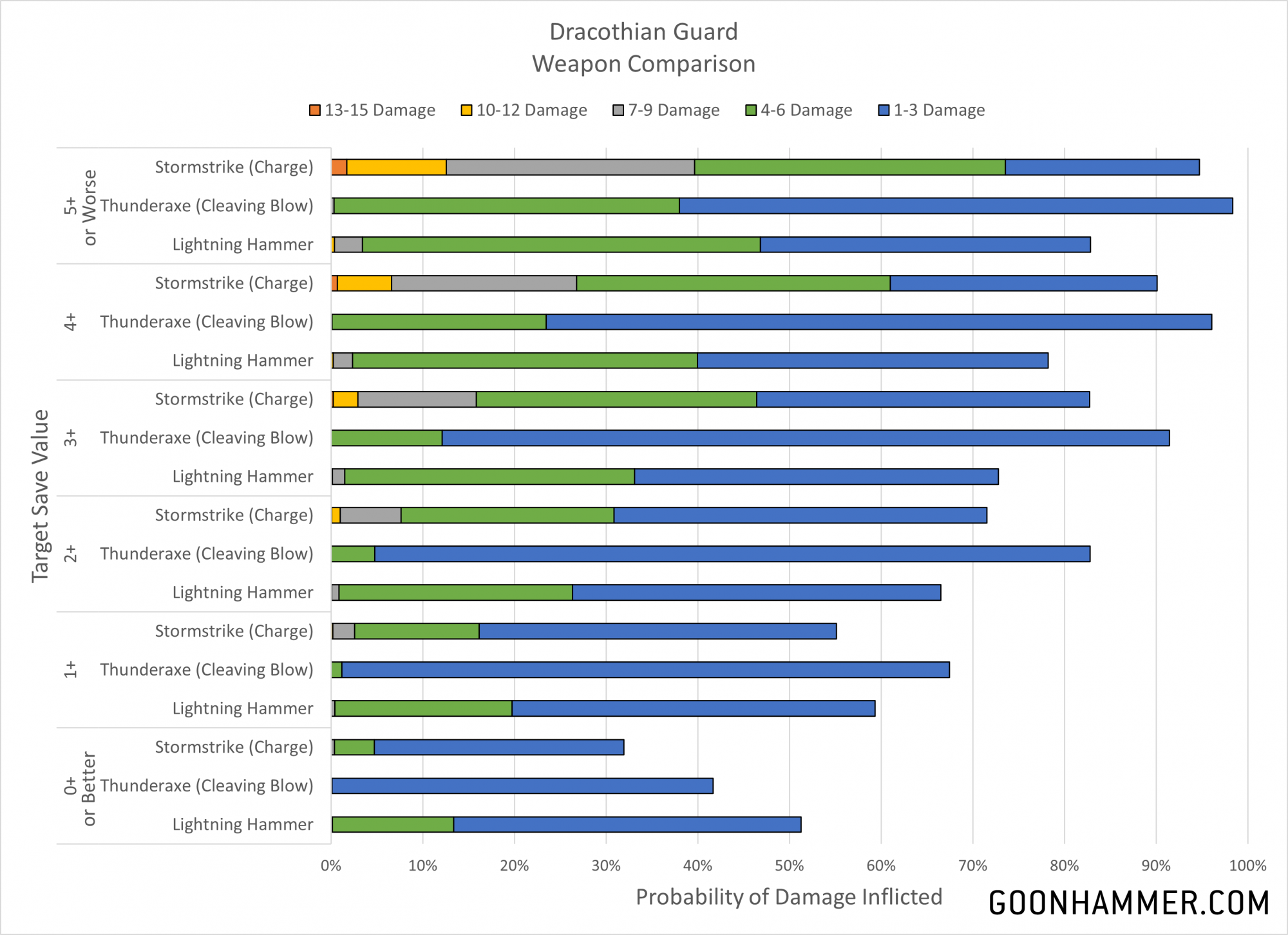 If your plan is to always have your dragon riding golden boys charge into the enemy and crush them without pity before escaping to charge again, then the Stormstrike Glaive is unquestionably the best choice. On the other hand if you expect to deal with incredibly armored threats, or you expect your Dracothian Guard to get stuck in over multiple turns, then the Lightning Hammer is a reliable option which will provide turn after turn of glorious damage. Either way you can expect to deal a lot of damage.