A History of Miniature Violence: Exploring the Skulz Program, Part 1

In a History of Miniature Violence, we look at the history of the hobby and some of the more interesting stories, events, and oddities that shaped the modern era.

Reward programs are everywhere these days – flight miles, sandwich cards, cash back on credit cards – but they’re much less common in the world of tabletop games, in large part because games tend to rely on a large number of small local retailers for sales. The big (and glaring) exception here is Games Workshop, who have retained a large direct order business alongside their local retailer efforts. If you joined the Warhammer hobby in the mid-2000s, you might have heard whispers of Skulz. Skulz was a loyalty scheme run by Games Workshop starting May 2000 and announced in White Dwarf 245. Participating customers were offered a chance to receive symbolic currency (Skulz) with each purchase, to exchange for prizes. In the case of Skulz, these were represented by silver skull stickers (bearing Wayne Englund’s Iron Warriors iconography), of which you would receive one for every 10 British Pounds or 15 US Dollars you spent through Mail Order (or double that on the weekends of the 7th to 8th May 2000)1. 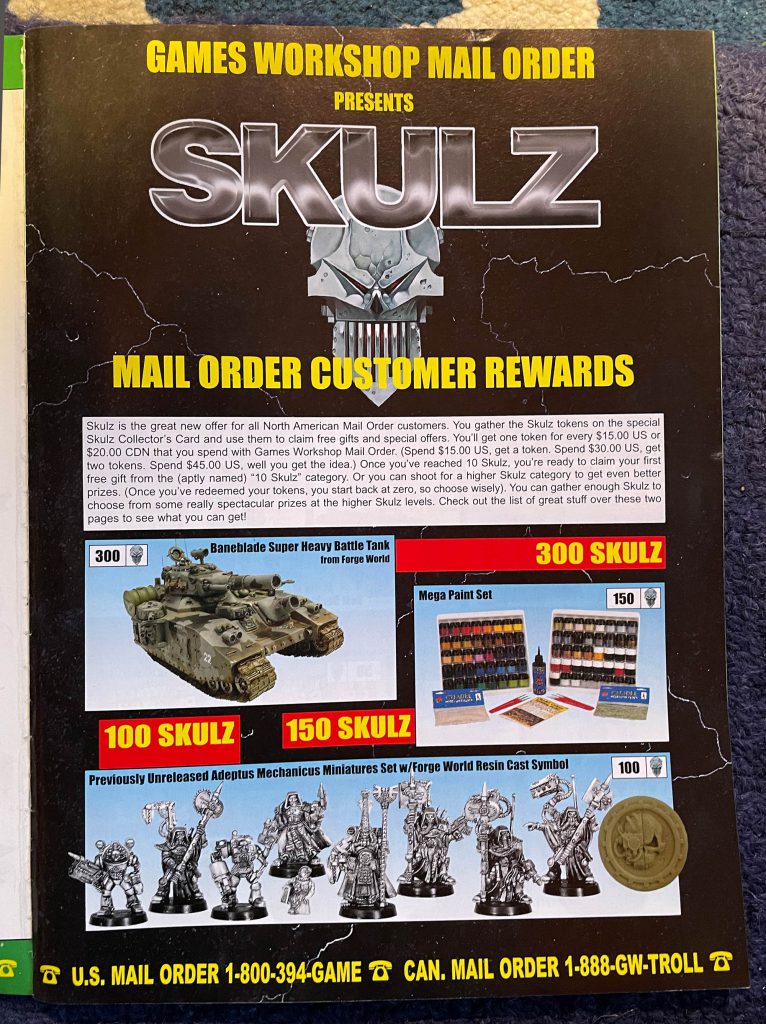 For those newer to the hobby, this is comparable to the three The Path to Glory actions, in which you would get a stamp for every 25€ spent and could cash them in for special dice and shirts depicting the marks of Khorne, Nurgle and Tzeentch. Unlike those, Skulz offered miniatures, books, terrain, and hobby accessories, with several items that were otherwise exclusive or new to the program.

I must note how difficult the research for this was2. When I began my original search for information about Skulz, all I could find was a very short article on another hobby site with very low-resolution images of the Skulz flier. By some luck however, I had recently found the blog Limited Edition Warhammer Models, who happened to have an article dedicated to all the model-related prizes from the program, including pictures of most of the miniatures. I also stumbled upon the Skulz section on the famous Stuff Of Legends archive and I will also be making use of resources (images, copies of White Dwarf, and oral history) provided by Dylan Gould from the Goonhammer team.

While this article may have started as a response to the poor state of resources on the topic of Skulz-exclusive miniatures, it slowly morphed into a much larger project. In this series we’ll be diving into the history of the Skulz program and looking in detail at the program’s prizes, with special detail on the miniatures, talking about when they were initially available and in what capacity.

2 Note that as I was not yet born at the time the program was announced, completing this research was only possible with the help of my fellow older hobbyists. 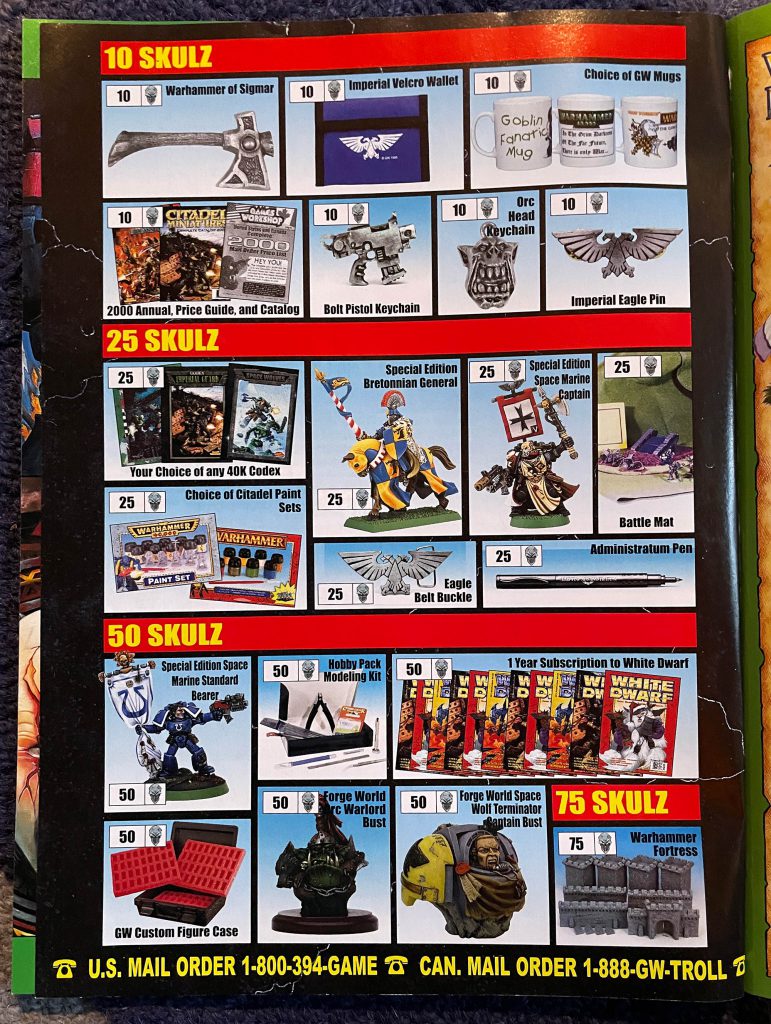 The Skulz program offered a number of reward models that weren’t necessarily exclusive to the program but at that point were either no longer in production or were only available in limited or timed releases, such as large army boxes or other promotions.

The first among these that we’ll be looking at in more detail is a series of Warhammer Fantasy Battles Army Standard Bearers. While these had been staples of their respective army books since 4th edition, after 5th edition Games Workshop seemed to have become reluctant to fully release any official models for these units outside of the big box sets in the early 2000s. The specific standard bearers chosen for Skulz seem to correlate with the army sets released at the time, since certain standard bearers would only later be available, such as the Ogre Bruiser or the Tomb Kings standard bearer, so the only ones included in the original program were ones released in 2000.

The Orc Standard Bearer was available for 25 Skulz, equivalent to spending 200 Pounds or 300 Dollars (the Skulz collector card features a number of “free” sticker spots, and there are five between every 25-Skulz milestone, so to get 25 Skulz, you only need to accumulate 20 stickers). And as expected from an orc, the banner really is just an icon with a bunch of rags, although the flag planting pose he’s in is a rather fun and uncommon pose.

This model was originally only available through the Orcs & Goblins army set released in 1998. This was a rather common practice in both 40k and Warhammer Fantasy Battles, where alternate sculpts and limited edition models like the standard bearer would be included as extra incentive to buy an army box.

This particular box was massive and included:

The Vampire Counts Standard Bearer was also available for 25 Skulz and brings with him what we all are used to with undead banners: Dried and stitched together skin with some flappy hands left, of course cast in beautiful pewter.

His design is rather reminiscent of the old Blood Dragon design – classic medieval plate armour with a helmet sporting a winged creature or just wings of some sort. Then again, except for a few dynasties, vampire back in the day almost all looked like Blood Dragons. Finding the deal that originally contained this model was considerably more difficult; the Vampire Counts wouldn’t receive a dedicated battalion box until around 2008, so I’m unsure as to what context this model may have been originally released in.

The Empire Standard Bearer models for command units have always been great, as they usually sport an actual flag with a large surface for hobbyists to be creative with. This one in particular is quite amazing as it has the flat surface of the standard facing forwards, giving you a massive canvas to put mean little messages on for your enemy to see during battle. This model was originally available in the Empire army set released in 2000 but would later be available for 25 Skulz.

Unlike the vampires, I could actually find an image of the army box; unfortunately, it is rather blurry and low resolution, but you can make out the standard bearer.

The Dark Elf Standard Bearer is reminiscent of the Black Guard as they share quite a similar set up armorwise (though with some difference in helmet ornamentation). But I suppose if given a coat he would easily look like a corsair as well. Personally, I am not the biggest fan of the “holding the standard and pointing your sword” pose, something that GW often repeats. That is not to say the sculptors have done a bad job; aesthetically and detail-wise, the model still looks stunning. This one, just like the others, cost 25 Skulz and was originally featured in an army box.

Similar to the Vampire Counts, the Dark Elves seem to not have had a Battalion box until 7th edition (roughly around 2008), and that particular box featured the most metal models out of any army box so far.

The Dwarf Standard Bearer has one of my favorite poses – holding a helmet (also that cute boar on his helmet is adorable). Similar to other standard bearers, this one went for 25 Skulz.

Somewhat noteworthy is the pose and standard mirrors that of the goblins – specifically the shaman staffs/standards – so the question is, did the Goblins imitate the Dwarfs, or do the Dwarfs just mock the Goblins?

This standard bearer was also released in an army set, though sadly I only could only find a rather blurry picture of the box. I’ve seen conflicting accounts online that mention the box included the Anvil of Doom. However as that’s not on the box art, I’ll leave that out. Additionally, I could not fully identify the other characters, so I’ve done my best.

The Bretonnian General that you could get through the Skulz program was first detailed in issue 239 of White Dwarf. Both the Bretonnian General and the Space Marine Captain were part of a pair of limited time offers: You’d get them for free if you bought a starter set (conveniently marked with a sticker). The model itself unusually spots a crest on his helmet, which I find an odd choice of style as they usually have elaborate icons and statues on top of their helmets, but maybe that’s why he’s a limited edition.

Thanks for reading! Check back next week for part 2, where we look at more of the models available in the Skullz Program. And if you have any questions or feedback, drop us a note in the comments below or email us at contact@goonhammer.com.