How to Paint Everything: Craftworld Ulthwé

In our How to Paint Everything series, we take a look at different armies of the Warhammer universe, examine their history and heraldry, and look at several different methods for painting them. Today we take a look at the Craftworld Ulthwé. The moody bad boys of the Eldar Craftworlds faction, these warriors have a very distinct paint scheme, clad in black and bone armor.

When Slaanesh was birthed and the massive warp storm known as the Eye of Terror was created, the Craftworld Ulthwé was trapped in its gravitational pull, and has decided to remain there ever since, battling the forces of Chaos in an unending battle. Because of the need for psychic might against these forces, the Aeldari of Ulthwé employ more Warlocks and Farseers in battle and are led by Seer Council, famously helmed by Eldrad Ulthran, one of the most powerful psykers in the galaxy. While many craftworlds prefer to stay out of the affairs of the galaxy’s other races, the Eldar of Ulthwé frequently intervene to direct humans, orks, and others in ways that will benefit them. “Them” being Ulthwé specifically here – their intervention frequently proves disastrous for other races, leading to events such as the Second War for Armageddon. Thanks, jerks.

The warriors of Ulthwé wear black and bone-colored armor. Because they have a ton of seers and warlocks, they tend to have fewer Aspect Warriors – their psykers just don’t have time to split their focus. They make up for this by having exceptionally well trained guardians.

The literature around Eldar is surprisingly thin for a faction as old and integral to the 40k storyline as they are. The Phoenix Lord series, particularly Asurmen and Jain Zar, have some decent reading about the Eldar pre-fall, and connects to Ulthwé pretty substantially. Ironically enough, one of the books where they appear most prominently is Fulgrim, where a young(er) Eldrad tries unsuccessfully to warn the Phoenician of Horus’ impending betrayal.

Painting Ulthwe means painting black, and learning how to effectively shade blacks and make the prospects of mostly black armor look interesting and varied. Often that will mean not painting things completely black but instead doing a kind of “off-black” with several shades of either dark gray or dark blue.

I’ve always liked the Ulthwe scheme and so I thought this would be a cool opportunity to paint one. I picked a Wraithblade for this particular scheme, since it’s got some large bone areas to cover. 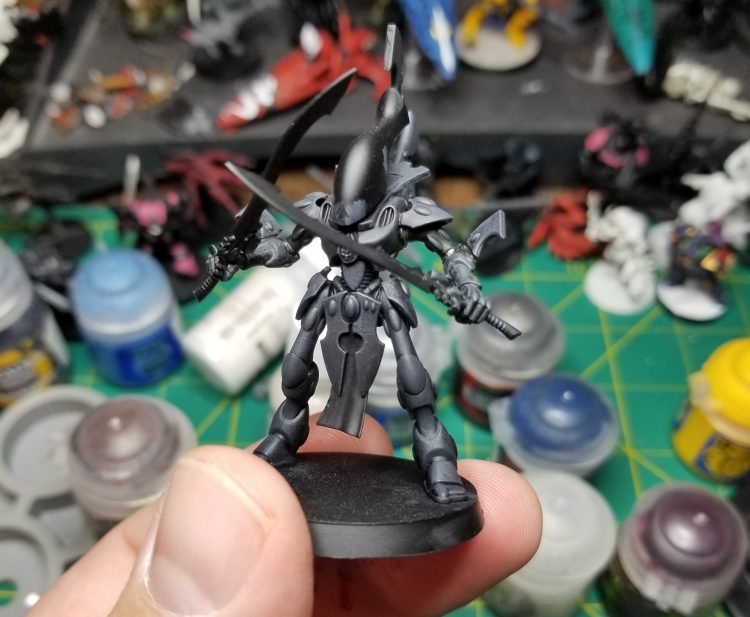 I started by priming the model with Abaddon Black, after which I highlighted it with Corvus Black. I add more depth and shading to this by shading parts of it with Nuln Oil and doing a second round of highlights with a 50/50 mix of Corvus Black and Mechanicus Standard Grey. 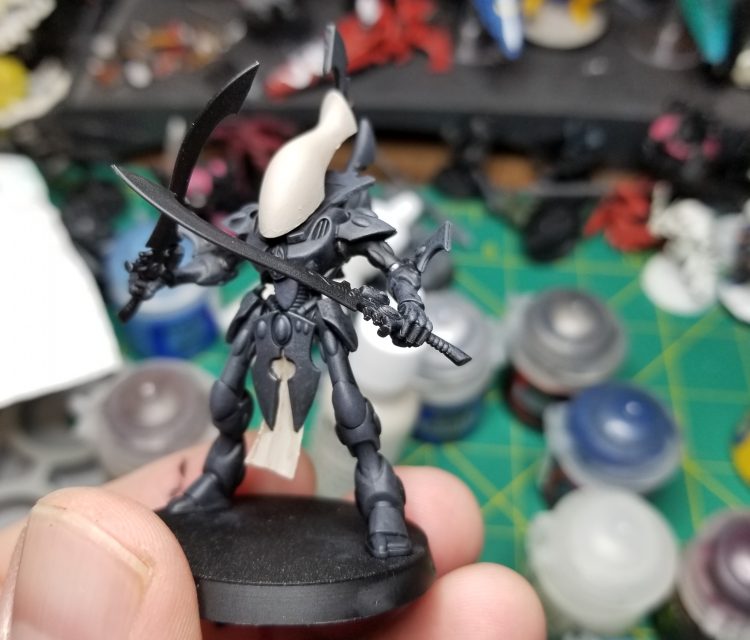 Next comes the basecoat for the bone parts. I’m using Rakarth Flesh here. For the tabard I do a quick wash of Agrax Earthshade and then a new highlight of Rakarth Flesh. Next I have to highlight his dome, which basically means blending up to Reaper Polished Bone, which is also the shade I’ll use to edge highlight the helmet with. 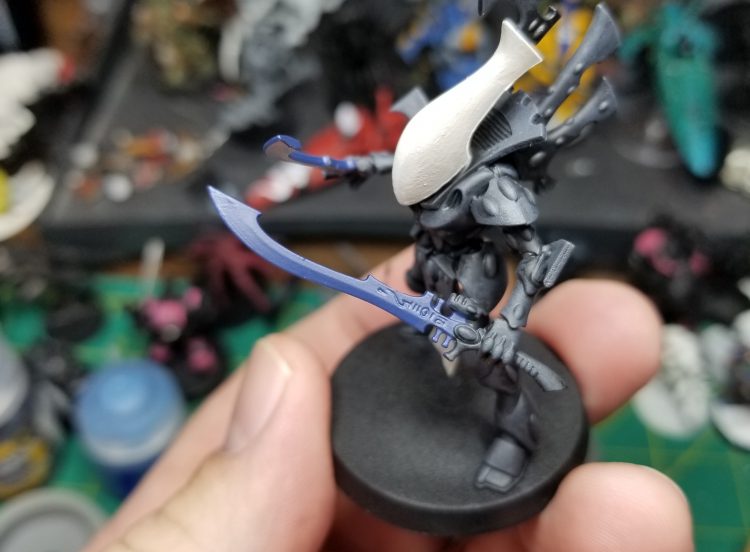 Time for the swords. These are a basecoat of Kantor Blue. 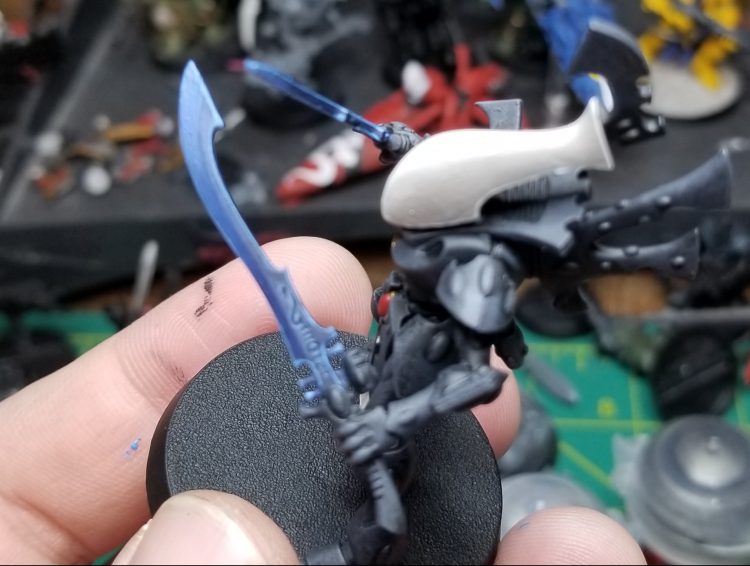 These I’ll shade with a bit of Drakenhof Nightshade, then blend them up to Hoeth Blue. They get a final edge highlight with Hoeth as well. Though any Power Weapon process you like will work here. 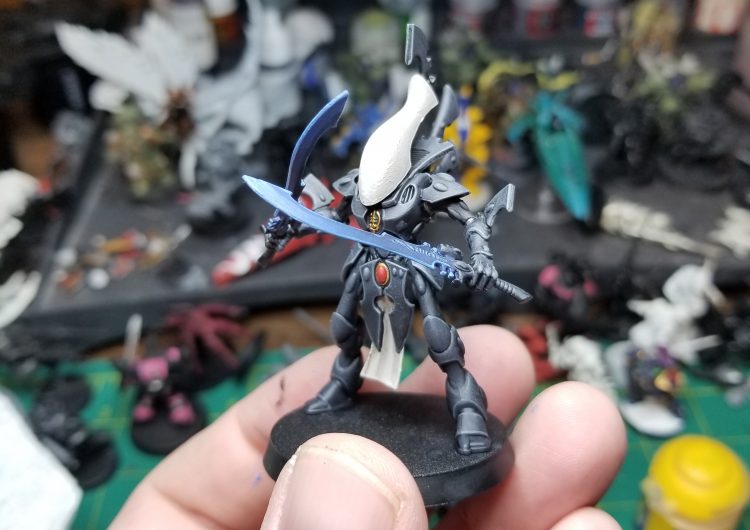 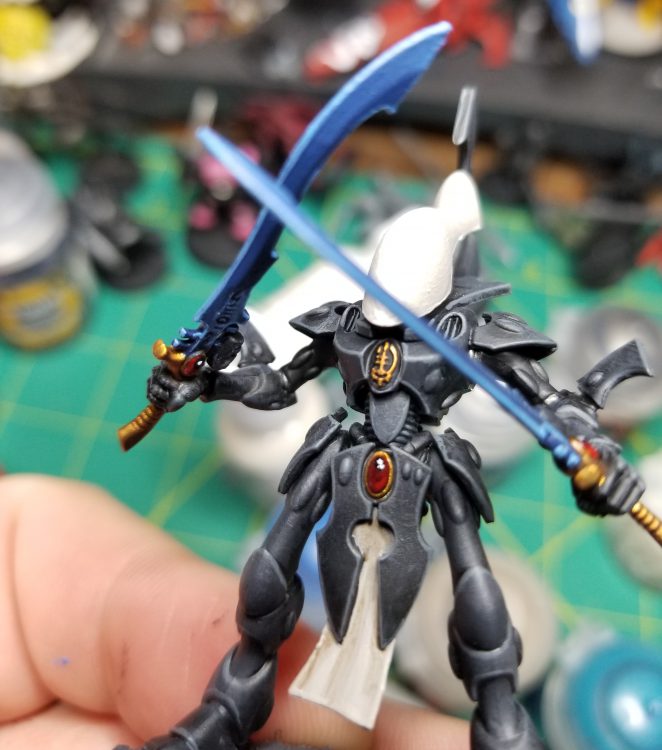 Finally the gemstones. This is a standard process for me – basecoat Mephiston Red, shade up with Carroburg Crimson and Nuln Oil, drop a spot of black in the upper right, two drops of white on top of that, maybe a swoosh of Evil Sunz Scarlet in the lower left. You can find a full tutorial on gemstones here.

Add a transfer (though note that I freehanded the symbol on my guy), do some final touch-ups and there you have it! I’m very happy with how this guy came out, particularly in terms of how I was able to make the blacks of the armor look varied and shaded. Mixing up Abaddon and Corvus Black really made a difference on this.

My Eldar army is Ulthwe more or less entirely because of Eldrad, always the first character who comes to mind when I think of Eldar. Their black and bone scheme also appeals to me, being very striking on the table.

The foundation of the scheme is, of course, black. This is a fairly simple process for me, aiming for a clean tabletop standard – all-over VMC Black, with Black Grey on raised areas, and then Mechanicus Standard Grey and Dawnstone in progressively finer layers to pick out edges as sharply as possible. You can see the difference in how well this is achieved between Eldrad and the Wraithblades, painted about two years apart.

Bone is the other core colour and I base Rakarth Flesh before layering on Flayed One Flesh, which as anyone who’s used it will recall is a total pig of a colour especially on large, flat surfaces. Thin layers work ok, or I think for the Wraithblades I actually just faced to bloodshed and drybrushed it on.

I try to reach a mid-point between Boon’s approach of “paint every single bump as a gem” and not doing them at all, picking out key ones and generally doing them in Kantor Blue, Teclis Blue, and finally Baharroth Blue, also used for the axes and cloth on the Wraithblades. Gems get a gloss varnish, the rest doesn’t. One or two key gems are picked out in red or orange instead, to provide a little contrast and mark them as being especially important; you can see these on the arms and pelvises of the Wraithblades, and the crest of Eldrad’s helm.

Finally there’s yellow – Averland Sunset based and then a 50:50 Averland and Flash Gitz to brighten it up – and gold, a very standard Retributor Armour base and Auric Armour layer. Apart from picking out some metals and a few bits of leather, that’s pretty much it, which makes this a nice simple way to approach Eldar in general and Ulthwe specifically.

For my Ulthwe model I’ve chosen a Warlock, which feels like an iconic pick for the “Psyker Craftworld”. This has allowed me to focus on the core scheme whiel also doing a rad psychic sword.

So let’s walk through the model, this won’t be a step by step but cover some of the key areas. Everything here was done by brush, no airbrush.

Black is the main color for Ulthwe and this can be tricky to get right. I wanted a satin-y look for the black so I knew I’d be highlighting up with blue tones. As you can imagine, I started by painting the whole thing black. My two highlight colors were VMC Old Rose and VMC Blue Grey Pale. Old rose is a pinky color that ends up working real nicely for highlight up black to create interesting tonal variation.

The process is pretty simple, gradually mix in Old Rose into your black and glaze in your highlights. As you can see I left the recessed folds pure black and focused on the large flat areas and raised folds. The raised flat area on the front I highlighted upwards to create some tonal variation and draw the eye up. Do this in an as many or as few phases as you like to get the level of blending you’re happy with. Once you’ve greyed your mix a bit with Old Rose, I started adding in the Blue Grey Pale for the starker highlights, which I mostly stippled on.

All in all, you get something that looks black but is clearly shaded and highlighted without being too flat.

The bone is the next most important cover, particularly since it covers the face. This was pretty much just blending from VMC Cork Brown to VMC Ivory for some nice shadowing on the lower parts of the facemask and near white as you get to the forehead and brow. I used the same colors for the runework on the front.

For the leather I wanted to introduce some red so I used VMC Hull Red and highlighted up with VMC Red Leather to VMC Pale Sand. You can get real bright specular highlights on leather, it helps sell the effect. And a couple scratches here and there do wonders.

For the gems, it’s the typical GW process. Gradient of crescents from dark to light and a dot of white in the dark area. Then I cheated and gloss coated them.

The sword probably is the first thing to catch the eye so I spent a fair bit of time here. The way I approach blade is I decide where my points of brightest reflection are ahead of time and then work from that. So in this case I decided 2 spots on one side and the third spot would be centered between them on the other side of the blade, which creates the opportunity for some reverse gradients. Then I just paint dark to light. Basecoat the entire blade in your blue of choice (I think I used VMC Dark Sea Blue) and then glaze upwards. So I coarsely painted in my reflection by mixing in some Turquoise and later white (or ivory), glazing in increasingly smaller areas until you get to the pure white reflection in the very center. If at any point you have to big of a shift, just glaze over it with a mid tone a couple times to blend it in.

Ulthwe are an interesting Craftworld that can be as challenging to paint as you like – you can go as simple as quick edge highlights on black or work toward a more nuanced scheme with different shades of black and gray. There’s also a lot of opportunity to add bone-colored details and geometric designs that stand out against the faction’s dark armor plates. Hopefully this guide gave you some ideas for your own approach. As always, feel free to send any questions or feedback to contact@goonhammer.com.