How to Paint Everything: Draculas (and other Vampires)

In broad terms, vampires as creatures who feed on the essence of the living to survive have been around for thousands of years, with mentions in folklore from ancient Mesopotamia, Hebrews, Greeks, Romans, and Manipuri. These proto-vampire spirits and daemons who drained lifeforce all pale in comparison to the real bad boy of modern horror fiction however: Dracula. Introduced in Bram Stoker’s gothic horror novel written in 1897, Count Dracula is based on the Eastern European folklore about vampires that emerged in the middle ages. Dracula’s name and some of his appearance and original history are inspired by Vlad III Dracula, the former ruler of the Wallachia region of Romania. Dracula was historically renowned for his cruelty; he had been nicknamed “Vlad the Impaler” for his habit of impaling his enemies on stakes. One such account of this occurs during the Ottoman War, wherein Turkish soldiers arrived at a the town of Targoviste to discover a “forest” of impaled corpses left behind by Vlad’s men.

While Dracula wasn’t an immediate best seller, it quickly gained steam and became widely known. Dracula as less of a horrible monster and a more seductive one paved the way for countless interpretations of the character as less of a “hateful, murderous dude who impaled babies” and more of a “tragic, gothic loner” or a Byronic hero (Stoker’s Dracula falls into this Byronic mold already but I’d argue he becomes even moreso in the two hundred years following). This also makes Dracula and the vampires that follow him easy marks for romance novels and teen fiction, where the notion of vampires as eternally young and beautiful, mysterious, and dangerous lovers is pure gold.

Where to Read/Watch More

Painting Draculas (and other vampires)

Painting Vampires is about nailing a few things: The pale flesh, the suave sophistication (and typically regal clothing), and what will probably need to be a blood spatter or two. Here we’re really covering Draculas, but if you want 40k’s own Dracula, check out our tutorial on how to paint Mephiston, Lord or Death.

(1)The skin starts with a base coat of Stonewall Grey, followed by (2) a recess wash of Druchii Violet. The trick here is to carefully put the wash where you want it, rather than slathering the whole thing. So here it is in and around the eyes, ears, in the creases around nose and cheeks, and under cheekbones.
(3) Next comes the initial highlight layer- a 1:1 mix of Stonewall Grey and Pallid Wych Flesh. This mix is put mostly on the upward facing angles of the face- The brow ridge, bridge of the nose and tops of nostrils, tops of cheeks, lips, chin, tops of ears, teeth, eyelids.

(4) This next step is a finer highlight of Pallid Wych Flesh on the most prominent angles, leaving enough of the previous layer to provide a transition- Very tops of cheeks, bridge of nose, brow ridge, chin, tips of ears, lips. The eyes are painted in with Khorne Red.
(5) Final step is to hit most of the teeth with Dead White and highlight the eyes with a mix of Sun Yellow and Burnt Orange (Any yellow plus orange would work for this step).

Here is another Dracula I painted for the old Black Coach. The basic idea was the same, but not painted in such a linear fashion. It has a similar purple to light grey gradient, but I took the time to smooth out the transitions. The teeth and nails on him are more yellowed, which can be accomplished with lightly glazed browns or by using something like Citadel Ushabti Bone. 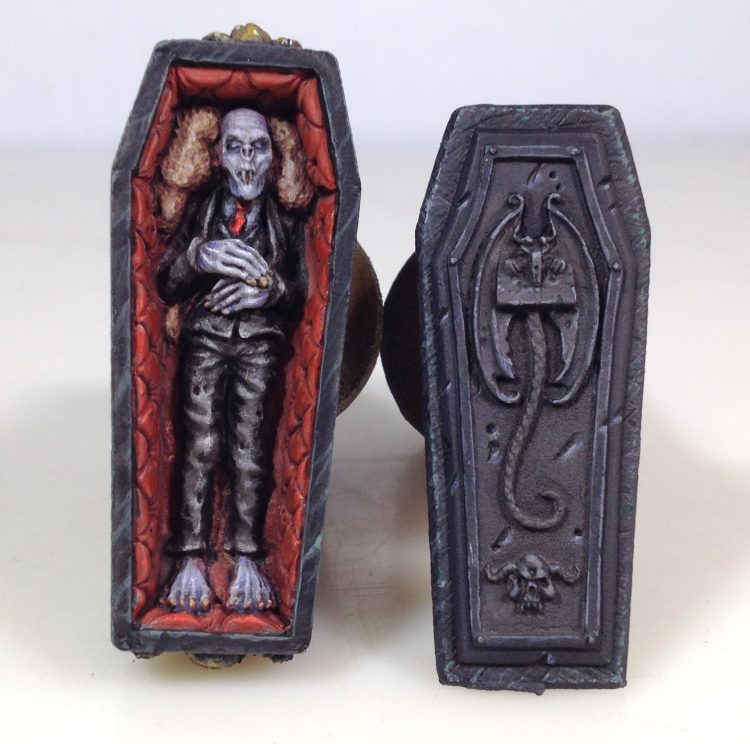 For my method, your first step is that you should pick up the board game Horrified, which you can find pretty easily at places like Target, and then immediately play it before or on Halloween, and then have your very own, ACTUAL Dracula to paint.

Just as note, these are fairly small, but they have a decent amount of detail, some of which came out only after priming them. I used a Zenithal, but since I don’t have an airbrush, this meant mostly that I sprayed with a combo of Chaos Black and Corax White, skipping the greytone because I was worried the minis couldn’t hold up to that much layer of basing paint. This was probably silly, but it didn’t really affect anything and gave me a great canvas to work from.

The paintjob for Dracula here is pretty simple, and only involves the following contrast paints:

Black Templar for the back of the cape, jacket, and pants.
Basilicanum Gray for the shoes and hair (mostly because I wanted to break up the black between the pants and the base).
Apothecary White for the vest.
Blood Angels Red for the inside of the cape and bowtie.

I decided to use the traditional Bela Lugosi Dracula as my inspiration, especially since Horrified draws from the Universal movie monster line. I made a few slight changes, such as coloring his bowtie (which is traditionally white) and the gold medallion, which hangs from a red sash. The mini didn’t really present these details in a way that would work, so I gave him a red bowtie instead.

I did not thin any of the contrasts here and went straight from pot to miniature. I found that for these small minis that worked best, but overall I was actually surprised at how nicely the contrasts played with these minis details; for example, the shading on the back of the cape actually ended up as a cool effect due to the way the contrast pooled and dried in the recesses, and I think it is actually one of my favorite examples of the power of contrast I’ve ever painted.

From there, I added a few accent paints.

Rakarth Flesh for the skin, as I wanted something cool and “dead” but not just white.
Averland Sunset for the yellow medallion and the buttons on the vest (I decided to skip metallics).
Yriel Yellow to highlight the Averland just slightly and make it look a little more ‘golden’ or ‘shiny’ given the space I had to work with.

Finally, I used Daler Rowney Pro Black ink to color the rest of the base, as this is my go to basing black. I believe this is a type of ink used for photography, I’m not really sure exactly, all I know is that it goes on very smooth and gives my bases very nice rims, and that’s about all I care about using it for.

The final product came out looking great, and really helped my copy of Horrified stand out on the table! Shown here are a few of Dracula’s buddies from a recent play of the game in keeping with the season; they were also all painted with contrast paints for 95% of their coverage, and the ink really helped finish their basing off by making it seem almost as if they came that way out of the box.

If I were doing this scheme on a larger model, or in an army that might contain Many Draculas, I’d probably drop the yellow accents for a metallic, and presumably focus instead on whatever weaponry he might be holding. Also, I wanted to attempt giving him the ‘red’ lip corners, like Lugosi had in the movie, but this mini was too small to try and attempt that without potentially screwing up the whole scheme, so I’d likely try that too. I also think that this scheme would make for a great black and white paint scheme base for a horror based army, with red as an accent!

Lords of the Undead

Well that wraps up our frightening week of spooky monsters to paint. Hopefully you’ve been suitably inspired by all of the undead monsters we’ve covered and you’re well-equipped to paint Draculas and vampires of your own. As always, if you have any questions or feedback, or just want to share a vampire of your own, drop us a note in the comments below or email us at contact@goonhammer.com.