How to Paint Everything: Mephiston, Lord of Death

In our How to Paint Everything series, we take a look at how to paint different models, armies, and materials, and different approaches to painting them. In this article, we’re diving into the Lord of Death himself, Mephiston.

Mephiston was not always known by his more famous name – in his former life he was Calistarius, a simple Librarian of the Blood Angels (as much as a wizard space Renaissance vampire can be described as ‘simple,’ anyway). In this form he is best known as the Librarian who accompanied the Blood Angels’ assault on the Space Hulk Sin of Damnation.

It was the Second War of Armageddon where Calistarius died and was reborn, however. While fighting in the defence of Hades Hive, Calistarius succumbed to the Black Rage and, like other victims of the Blood Angels’ curse, was inducted into the Death Company. During an assault on an Ecclesiarchy building, the building collapsed, and Calistarius was trapped, still raging as he imagined himself to be Sanguinius. For an ordinary person, even an ordinary Blood Angel, this would have been a long, slow, death sentence; for Calistarius it was the moment of his apotheosis. Fighting back the madness of the Black Rage, he eventually, through sheer force of will, overcame it. On the seventh day of his entrapment he burst forth from the tomb; he was Calistarius no longer. Now he was Mephiston, the Lord of Death.

It was not an easy birth. The ruins had fallen to the Ork menace, and Mephiston, weaponless and with his armour in ruins, was immediately confronted by a whole mob of them. Something had awakened in him, though, and he was now far more powerful than an ordinary Space Marine. He slaughtered the Orks mercilessly, forcing them into retreat after he punched through their boss Nob’s chest bare-handed and tore out his heart.

Mephiston is now one of the most powerful psykers in the Imperium, his powers enhanced by his rebirth, as well as possessing greater physical strength and toughness too. He shrugs off blows that should wound or kill him, and moves with lightning quickness. He rose to even greater heights after crossing the Primaris Rubicon, his altered physiology enhanced even more by the dark technology of Belisarius Cawl.

Mephiston is a popular character with Black Library writers, with both a standalone novel and his own standalone series.

Mephiston: Lord of Death was written by David Annandale, covering the time shortly after Mephiston’s transformation as he and his battle brothers descend to the mysterious world of Pallevon.

I don’t collect Blood Angels, but Mephiston is such an iconic miniature. He’s frequently described as “sinister” in the background and I wanted the mini to reflect it:

“…there are whispers that Mephiston paid a dreadful price for his resurrection, that when he mastered the Black Rage something altogether more terrible took its place.”

The color scheme denotes him as a Blood Angel, but his skin is pale and his hair is no longer blonde.

I went with blood stains on his mouth and glove, suggesting that he may be transforming into something darker (part of his Faustian bargain for conquering the black rage). If I could go back, I’d add the body of a fallen Death Company to seal the deal.

Cool things I learned painting: Flesh Tearers Contrast Paint is great for glazing red. I should’ve gone brighter on the red highlights, first. Incubi Darkness is also great for blacklining red. Thanks to GW’s Darren Latham’s vid for both tips – check him out on YouTube!

Wet palettes are one of the biggest game changers to how you’ll paint your minis. If you’re not using one. Get one immediately! You can make one yourself, but I recommend this one from Red Grass games.

Why use a Wet Palette?

The acrylic paints we use are designed to dry quickly, faster than we have time to paint! Wet Palettes help you avoid painting “out of the bottle”, keep your paints lasting longer and keep your paint layers thin!

Hobby Cheating: After priming your model, hold it under a bright light and take a photo. This will act as a “guide” for where you should place your highlights!

I decided to paint Mephiston in “hard mode” and primed him with Chaos Black spray paint. This made it easier to ignore hard to reach places that I couldn’t paint easily with a brush! The head was primed separately with Grey Seer.

I recommend you paint the first to keep yourself motivated. You can re-attach the face once you’ve painted the top area of the model.

The secret to painting faces is watered-down, thin layers (mine were a bit chunky here). Go lightly when spraying primer so you don’t obscure detail. If you don’t get perfect coverage, that’s okay:

Remember that photo we took of the primed model? We’ll use that as a reference for placing our highlights:

Remember to use that photo you took of the primed model as a guide for placing the highlights. It doesn’t have to be perfect, but it will help guide your brush!

The Trick to highlighting the cape will be leaving a sufficient amount of black showing:

Try to keep the highlights limited to the “bottom-right” of the jewel. The “top-left” should remain Caliban Green:

I used a different set of greys to differentiate the gloves from the cape: 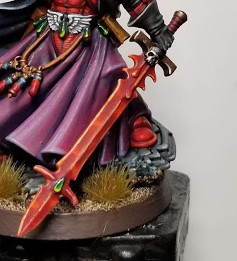 Try to make your sword highlights “uneven” along different parts of the flat of the blade.

Let me tell you, after reading Joey’s comprehensive method above I feel like I have a tough act to follow. If you’re not quite on his level and wanting a simpler Mephiston which is closer to the box art version, here’s mine, which involved a lot fewer layers and a lot more Contrast.

I primed my guy all over with Wraithbone, and then hit the robe and armour with Blood Angels Red and the cloak, gloves, and his extremely goth psychic hood with Black Templar. I also hit the wings with Apothecary White, the skin with Guilliman Flesh, and the hair with Snakebite Leather.

I then layered the red with Mephiston Red, the cloak with VMC Black Grey, the wings with pure VMC White, the hair with a touch of Screaming Skull, and the face with Kislev Flesh. The gold is a standard Retributor Armour -> Auric Armour layer.

I washed the robes (and mouth) with Druchii Purple, heaviest in the folds, and the chest armour with Casandora Yellow. This gave two distinctly different red tones, which helps differentiate the two big red areas. I then tidied up a bunch of the wash with more Mephiston Red and then hit the high points with Wild Rider Red, as well as the edges of the armour. The eyes and temples have a blue glow, which I replicated with some Teclis Blue and then some Baharroth Blue. The sword lightning I’m not really sure about at this point, but by the time I’d finished it was too late to change – this is just Kantor Blue, Teclis Blue, Baharroth Blue, and then some VMC White.

Finally, fitting the Halloween theme, the skulls are Rakarth Flesh, then Ushabti Bone, washed Seraphim Sepia, and then layered Ushabti Bone once again.