How to Paint Everything: Eldritch Gods, Horrorterrors, and other Weird Monsters

Eldritch horror abandons the familiar trappings of Romantic Gothic horror – which often looked at monsters all too human in their motivations and desires – in favor of something alien, weird, and unknowable. The term became popular in the early 20th century through the writings of HP Lovecraft, whose horror focused on the terror of grappling with monsters and horror too alien to even comprehend. Eldritch or Lovecraftian horror focuses on the cosmic aspect of horror, with an emphasis on creeping dread and the loss of sanity, over more traditional gore or shock scares. The creeping feeling that, beneath the surface of things, something is definitely not right with the world, and to pull back this veneer and see the true way of things would drive us mad. The monsters in these works do not take humanoid forms but instead inhabit a variety of shapes, unfamiliar and unsettling to the eye.

Where to Read/See More

Eldritch Horror was popularized through the works and mythos of HP Lovecraft, but there are plenty of other places to find great examples of it today.

When one thinks upon Lovecraftian horrors, one inevitably thinks of tentacled otherworldly creatures. While Lovecraft did not himself create the Cthonian–Brian Lumley created them some 30+ years after his death–these rather loathsome things have been a staple of eldritch horror stories and games for a long time. They’re giant, horribly dangerous, and make for a perfect nameless enemy.

To get started I’m painting up a Cthonian from Fantasy Flight’s Mansions of Madness tabletop game, which offers an impressive array of miniatures including eldritch threats, cultists, and assorted hapless adventurers. Since the game isn’t primarily about hobbying, the details on these models aren’t terribly impressive and there’s a good amount of flashing. Thankfully a lot of these monsters are large enough it’s pretty simply to get in and clear away most of the egregious mold lines.

I primed the Cthonian in Wraithbone spray, as the first painting step I took was a quick application of Skeleton Horde contrast. This gives the model a nice earthly undercoat, which I’ll then build up with successive layers of pasty flesh.

I started in one the flesh using a 50/50 wash of Ushabti Bone and water. As you can see from the photo above, this allowed a light coat of white to reach into all of the various folds and give the model a sickly/milky film look. I then applied a couple solid layers of Ushabti Bone to the raised folds and details. 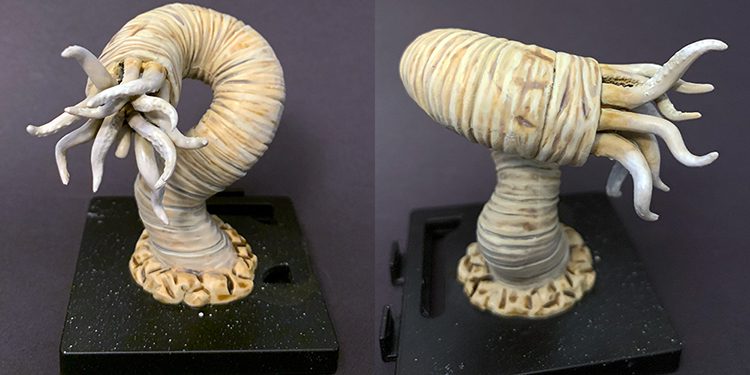 Next, I hit all the raised areas with more Ushabti Bone and a successive layer of 70/30 Ushabti Bone/Wraithbone, using a bit of the excess (watered down) to add a smooth transition on the tentacles. 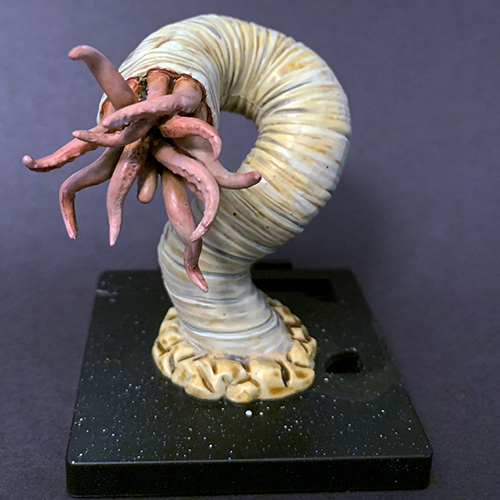 Add a complimenting color to the tentacles. I went with a natural (but still gross) pinkish color. I improvised (half-assed) a purple wash from Blood Angels Red contrast, a touch of Caledor Sky, and some water to reduce the color a touch. I let this dry and then did any touchups I needed, making sure to catch any excess pooling at the bottom of the model.

Reusing the wash color I created, I slowly added in some Wraithbone to bring the tone up to a brighter fleshy purple and applied multiple line layers to the tentacles.

Finally, I went over the model and handpicked some crevices and details to hit with some Agrax Earthshade to deepen some of the folds and marks. Next I applied shading to the pucker-areas of the tentacles and at the mouth where they enter the body. Finally, I applied a gloss (I used Secret Weapon Scenics Realistic Water because I couldn’t find my actual gloss) to give that bonus gross factor.

Roll up roll up, and come see the carnival of horrors. I made this little warband as a group of possessed for Mordheim, and then added a few more big lads to flesh them out for other skirmish games. They were an exciting sculpting and converting project, and I wanted to really get them to immediately read as horrific and wrong.

Pretty much every one of these models started with a Ironrach Skin basecoat, and then a 1:1 Reikland Fleshshade : Carroburg Crimson shade, followed by highlighting back up progressively adding White Scar to the mix. Everything else is just gravy (and blood effects). 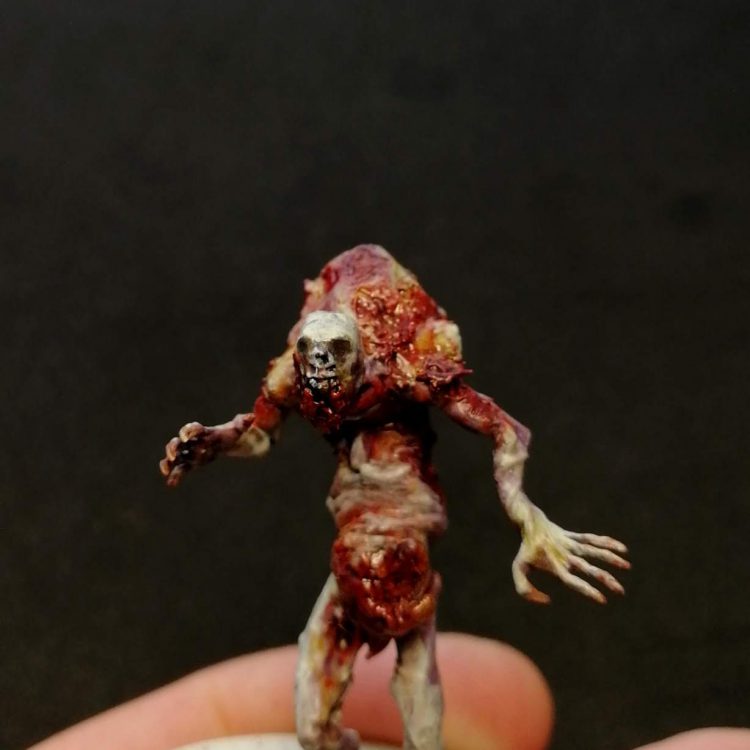 First up, meet Lungback. This was very close to an original sculpt, using a ghoul body as the frame, and then sculpting a new head, arms, back, torso and uh… ok it’s ghoul legs with a greenstuff on top. But you might be surprised at how easy some of these effects were to pull off . The open sores and torn flesh revealing… insides… was done almost entirely by crafting a smooth greenstuff lump and then using the PVA + Super Glue trick. To do this you’ll need some liquid super glue and some normal PVA glue. Apply the PVA in a layer over the surface and then allow drops of Super Glue to fall onto it. As the glues dry, they’ll turn into this unpleasant twisted organic textures, and using a cocktail stick you can carefully pull and stretch this around as it dries to get it looking exactly how you’d like it to. I think just covered the damn think in Vallejo Effects (Old Blood, Fresh Blood and Vomit) as well as citadel’s blood for the Blood God. Get it looking real bloody and slick and it’ll look great. 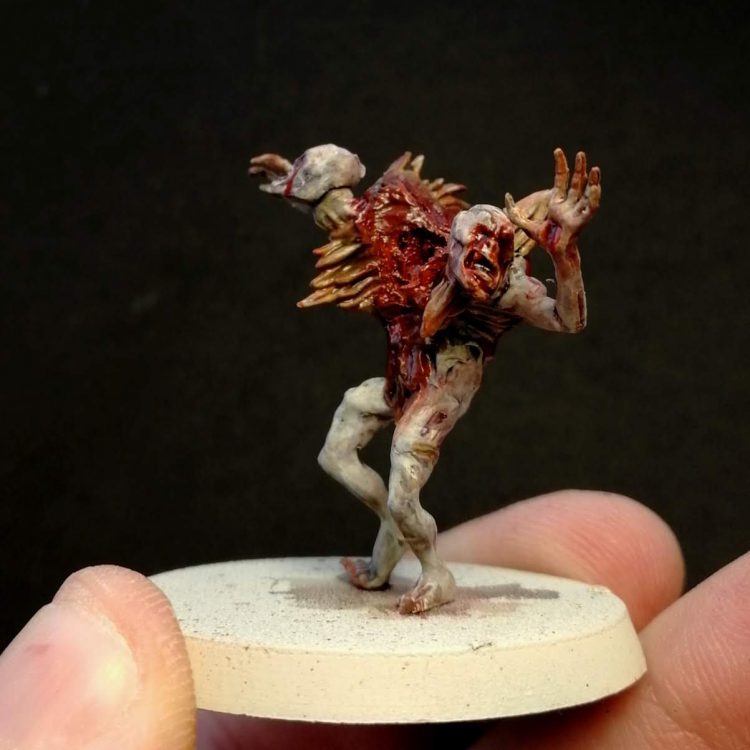 The Twins are up next. This was much more a genuine conversion rather than a full sculpt – I simply took a pair of ghoul legs and two ghoul bodies then cut each ghoul body so about a quarter of it was missing from each side, leaving two flat surfaces, a head and an arm on each. Then I positioned them together, applied a bit wedge of greenstuff in the middle and then carefully began pressing them together and pulling them apart. As the greenstuff is worked it becomes fibrous, and eventually you’ll get it to a point where it pulls apart leaving these ragged strands and tatters. That dry, I sprayed the mini, applied copious blood effects to the awful wound in the middle, and they’re ready to rumble. 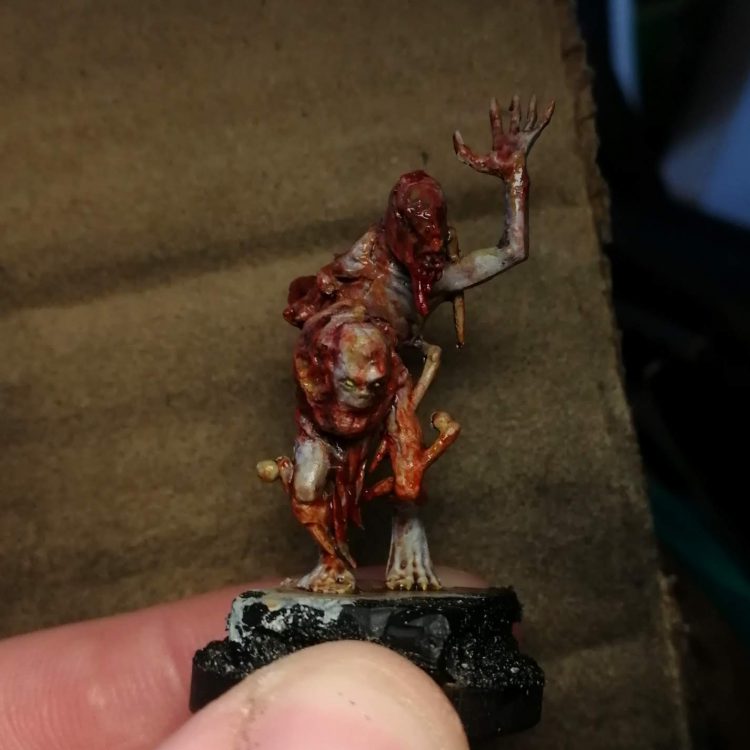 Vestige was another combination of two ghouls. but this time I cut away the belly of the first, and around the right shoulder, then formed a greenstuff belly into which I set a ghoul head. I then used PVA and superglue as before to make it look ragged and like an open wound, and that was pretty much all that was needed. 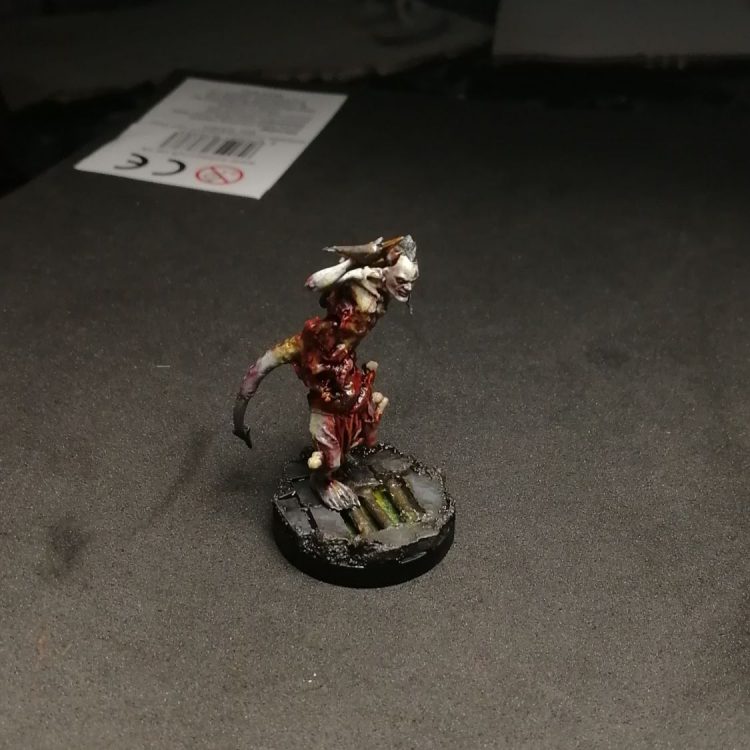 The leader of our happy little band, Savant was one of the most difficult conversions. He’s actually the upper torso of a Harpy fixed onto the legs and torso of two ghouls, one on top of the other. This was then hacked about a bit, with greenstuff applied to make it more ragged and unpleasant. I used the bones that are for decoration in the ghoul kit to have them jutting out of him at an unpleasant angle. I used the rest of the harpy to give him a tail and a little surprise on his back… 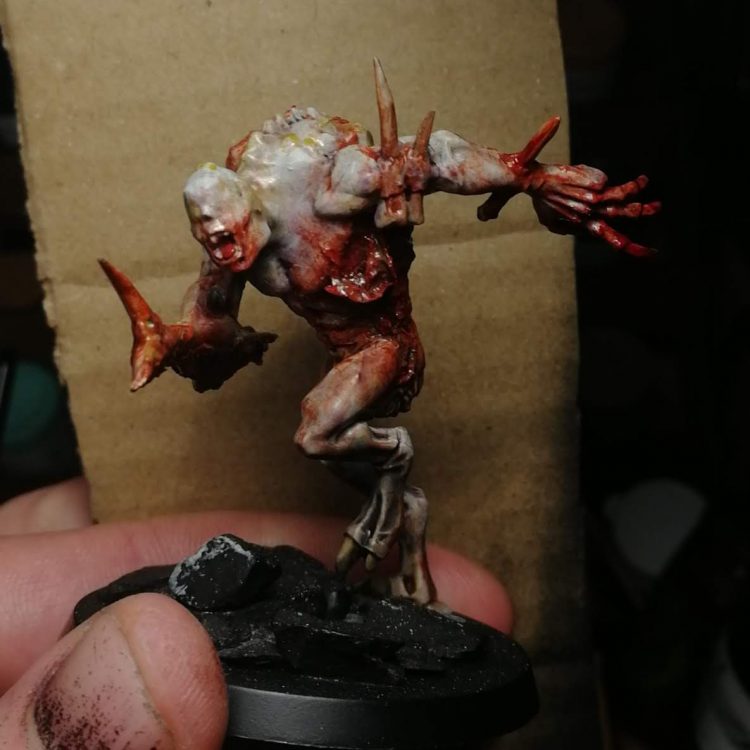 Jumbo has greenstuff to smooth over his eyes, and his right arm was carved down to remove the hand and add his… pointy stumps. The tear in his chest was made with PVA and Super Glue which, when almost dry, was sliced with a scalpel and pulled downwards with a cocktail stick. The base model for this was a Crypt Horror, which is also the case for his brother Dumbo: 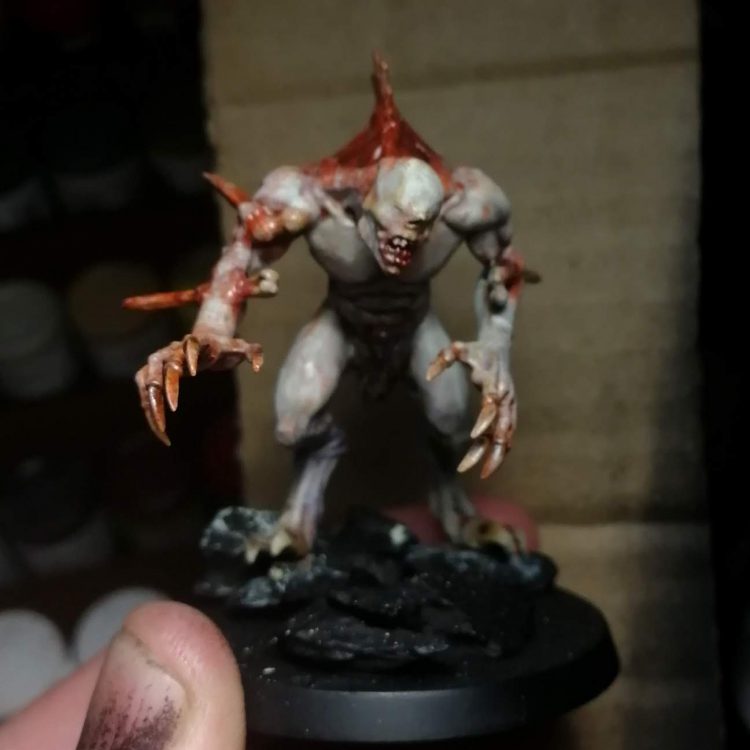 Dumbo was even simpler. – the green stuff over his eyes was basically the only conversion made to the base models. Luckily the base model with the spine exposed is gross as hell so that served my purposes well. The claws and bones are Morghast Bone washed with Agrax Earthshade then highlighted with Ushbati, before being given a good coat of Vallejo Effects Vomit.

Get Weird With It

That wraps up our look at eldritch horror and with it, our slate of Halloween painting tutorials. We hope you enjoyed reading these and following along as much as we enjoyed making them! In the meantime, if you have any questions or feedback, drop us a note in the comments below or email us at contact@goonhammer.com.