Given the flurry of new product releases we thought it would be useful to start doing a follow-up to each set with a list of the top 10 or so cards that would seem to have an impact on the format. Of course, this is a few weeks late as by the time we had the idea, Baldur’s Gate came out and we had to write about that. In this series we’ll talk about cards that will become staples, or combo pieces, or have a lot of value in niche decks with an eye toward Commander. We’re calling this series Memory Jar, after the powerful artifact. 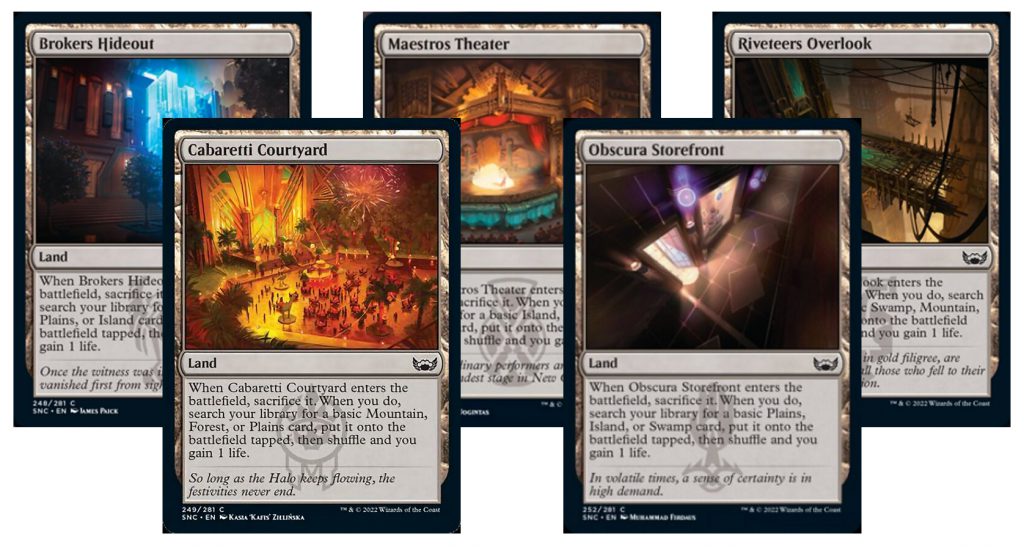 First, the new cycle of Shard fetches, or “Tri-sac lands” as they’ve been called in some circles. These all enter the battlefield, they have a triggered sacrifice effect, gain you 1 life, then put one basic land into play tapped from the appropriate 3 choices of the appropriate shard. These are okay at best. They are significantly worse than the original fetches, because they will only fetch basics, the basics enter play tapped, and you can’t wait to use them. One of the powers of other fetchlands is you can use them to reshuffle your library if you know you have things on top you don’t want. Evolving Wilds and Terramorphic Expanse are better, as is Prismatic Vista and Fabled Passage. If you don’t have fetches I’d include these over the panoramas, but that’s it. 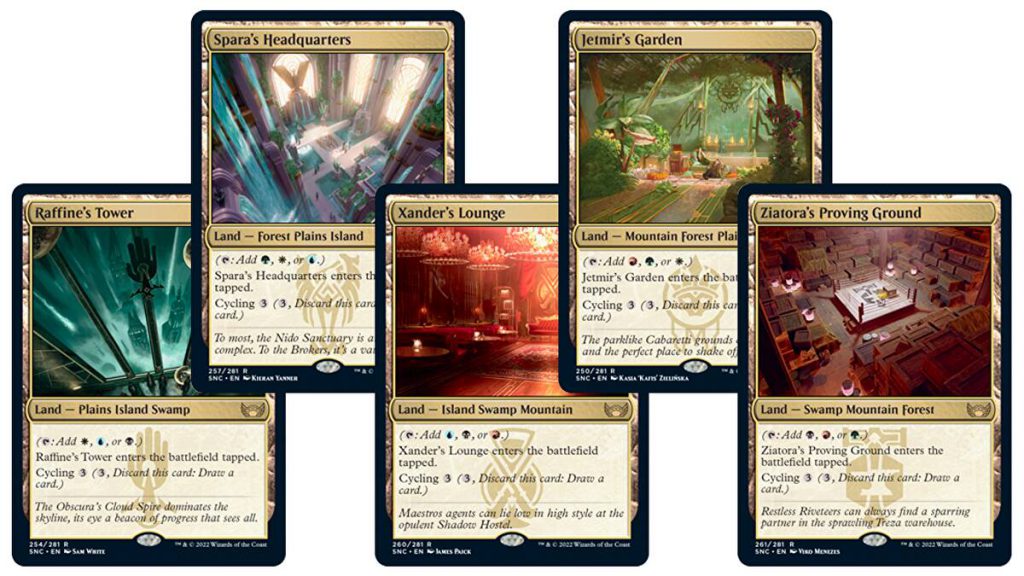 It goes without saying that the cycle of tri-lands with Cycling (to finish out the Triome cycle from Ikoria) are worth picking up. The only question is why they weren’t packaged in the Commander precons.

Aerial Extortionist – At 5 MV this is probably too expensive to make the cut, but it will get you a free draw whenever your opponents cast their commander (much like Ghostly Pilferer) with the added bonus of the ability to keep exiling nonland permanents, that they can then cast, but which will net you a draw.

Dusk Mangler– This is a pretty strong reanimation target. You should never be casting this thing, but since it forces each opponent to sacrifice a creature and discard a card and lose 4 life, that’s a lot of punishment.

Currency Converter – Ways to benefit from discarding are becoming more common, and this is another one. If you can consistently connive or have impulse draws in your deck you can benefit from this, grabbing treasures or rogues, depending.

Jolene, The Plunder Queen – This has a political dimension, but getting more treasure is big. Obviously, you can run her as a commander, or apparently green has treasure cards now too so.

Ledger Shredder – This guy is likely to let you draw/discard every turn of the game. That’s amazing card selection and the shredder himself should likely ramp up into something dangerous rapidly, especially since it’s a 1/3 with flying to start.

Luxior, Giada’s Gift – So this is a way to actually protect your Planeswalkers in commander, which is pretty nice. There are also a bunch of weird tricks with things like the Ozolith to instantly get emblems. I expect to run into it from time to time, but it’s clunky enough that it won’t be everywhere.

Professional Face-Breaker – Yeah, amazing. Just amazing, gaining treasure for dealing combat damage alone would be playable, but the second ability is frankly amazing. It alone would also be playable. Together this is a crazy creature, should be an auto consider for any red deck at this point.

Rumor Gatherer – If your deck is set up right this can cause some fairly serious card draw.

Witty Roastmaster – This is a 3rd source of “when a creature enters play under your control, deal damage to all opponents” and it makes that style of deck more powerful and redundant.

An Offer You Can’t Refuse – This is a very strong 1 MV counterspell, just slightly worse than Swan Song which is absolutely a staple.

Big Score – This is almost the best version of this card that’s been printed in the last year, and they keep printing it because it’s solid. Discard 1 to draw 2 and get 2 treasure tokens, at instant speed, which can be important.

Grand Crescendo – For WW all your creatures gain indestructible. On top of that, if you can pay more, you get tokens. At instant speed. Nice for creating triggers on creatures entering play.

Smuggler’s Share – This is a solid white enchantment, that benefits you when your opponents are doing well. I think cards like this will keep getting printed, and an archetype of “group hug you to death” will emerge.

Prosperous Partnership – Yeah there weren’t enough treasure cards already. Anyway, tapping creatures that are just chilling to create treasures is awesome. And the tapping comes from the enchantment so there are a number of ways this can be part of a game-ending combo.

Prizefight – Instant speed fight for 2 that creates a treasure is solid.

Industrial Advancement – This seems like it’s a bit of a sleeper, but notably when you sacrifice the creature, it doesn’t care about power, or mana value, or anything. If the top card of your library is a Blightsteel Colossus, or an Archon of Cruelty, or really anything, it goes into play.

Life Insurance – Creating treasures when creatures die is powerful, extort is useful. This is a combo piece.

Resourceful Defense – This is like The Ozolith but more so, and you can do things with this like manipulate the lore counters on sagas, or rush out emblems.

If there are cards from Streets of New Capenna that you think should be added to the list, that you’ll be putting in lots of decks, please leave a comment below.