January marks the release of two new kits for the Old Dominion in Para Bellum’s Conquest: the Last Argument of Kings. Despite the name, the Old Dominion are the youngest faction release-wise in Conquest, and these new kits significantly flesh out their foreshadowed roster.

Before we get started, a big thanks to Para Bellum for providing preview copies of the kits for review purposes. 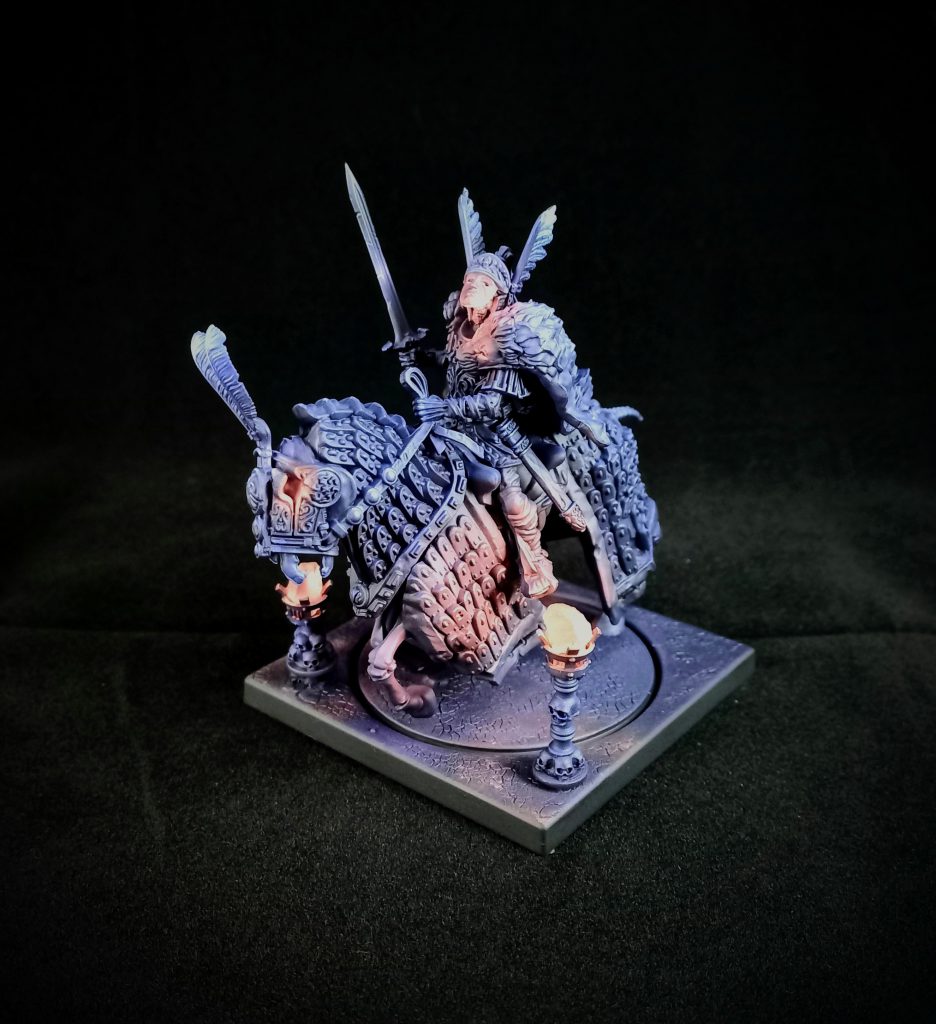 The only remaining unreleased character for the Old Dominion, the Mounted Strategos is obviously designed to fit in visually with their Kataphraktoi; the only unit he can be fielded in right now, and his logical home in any case. There are some clever visual flourishes to bring him to visual prominence in the regiment despite a consistent model scale, thanks to the extra height and bulk from his feathered helmet and horse plume. As with most Old Dominion models, there’s a lot of extra incidental detail from the combination of ornate armour and dilapidated and decaying flesh, bone and cloth that adds a lot of visual texture to the model and which painters can take advantage of with fairly simple techniques.

In terms of assembly, for those unfamiliar with Conquest, it’s a 38mm scale wargame, which has a number of advantages but changes the usual dynamic for plastic model assembly. Because the models are large enough that the usual weightlessness of plastic doesn’t apply, you’ll be dealing with a mini large enough that individual pieces have a weight that strains the holding power of plastic glue while curing. As such, you’ll want a workflow for assembly that gives joins time to set up and harden before moving on. There are plenty of joins on the Strategos like his sword arm, which is two pieces – the arm from shoulder to wrist, and the sword hand. Give the arm time to cure in its joint before attaching the sword hand, or the combined weight of the pieces will cause challenges.

With this caveat (and I’ve assembled enough Legionnaires now to be comfortable with the workflow that lets separate elements cure at any given time), the model went together very cleanly. A clever little join that connects his left hand to the reins means you’ll be mostly set in a single pose, but there’s some solid poseability of the head and sword arm, and a canny hobbyist could sculpt an inclined base for the model to adjust its pitch to good effect.

Like most Conquest character models, the Strategos is a detailed and ornate sculpt but doesn’t come with any spare elements. However, Old Dominion players looking to customise it should find ample spare bits from their Legionnaire kits if they wanted to add some extra gubbins. 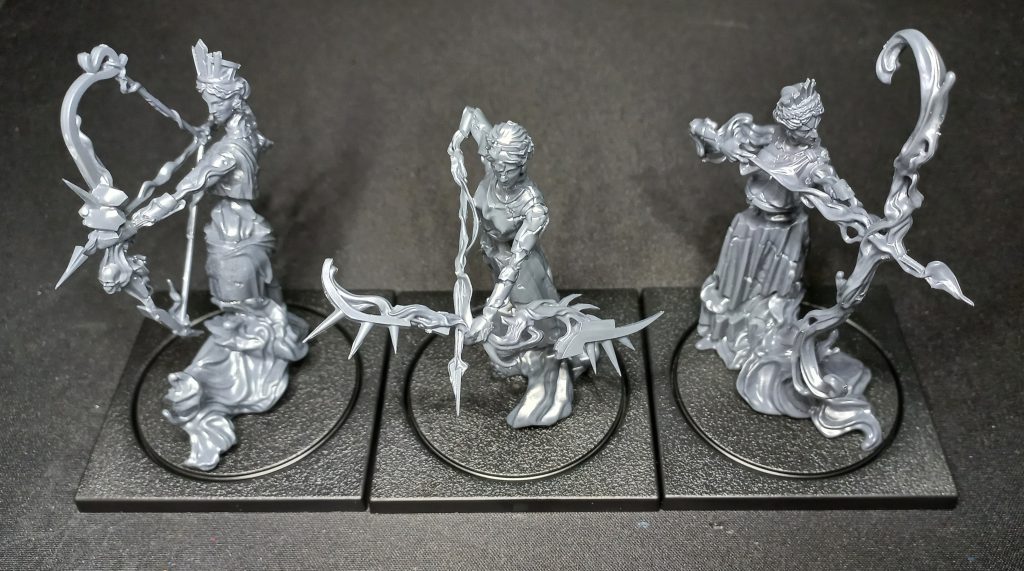 One of Conquest’s dual kits, Karyatids and Kanephors are temple statuary shattered and animated by the blood of the Dominion’s dead god that wept from his temple walls after his fall. This is a wonderfully unique aesthetic, and this kit has a number of technical and design elements that are worth calling out specifically.

Firstly, the entire idea itself. Sculpting something like viscous fluid in motion is not an easy task, and these models stick the landing.

Secondly, while the kit isn’t loaded with spare weapons (you’ll get exactly enough bows or melee weapons to assemble them in whichever configuration you need), it does come with what appears to be a lifetime supply of statue heads. This actually lets you fairly significantly change the look of the unit; while the heads are all either crowned or laureled women, they’ve got significant variation in terms of style, with looks that range from classical Greco-Roman inspired, to papal tiaras, to what I think are more eastern orthodox influences. Whichever look you pick, you’ll have enough for the regiment to look uniform if you desire.

Finally, I want to thank whoever at Para Bellum decided how to cut the sprues for assembly. When I saw that the bow arms are four point joints (a bow which connects to two separate arms, which then connect to the shoulders of the torso), I very nearly had a Nyss Hunter post-traumatic stress incident, but in practice they went together a smoothly as any model I’ve assembled. The arms slot into very clear locations on the bows and then end in ball joints for the shoulders, meaning that you can assemble the bow and arms as one piece, let it set, and then just pop the torso in at which point it will just hold in place by itself while it cures. I was so impressed that I took this picture mid-assembly just to illustrate what I mean: 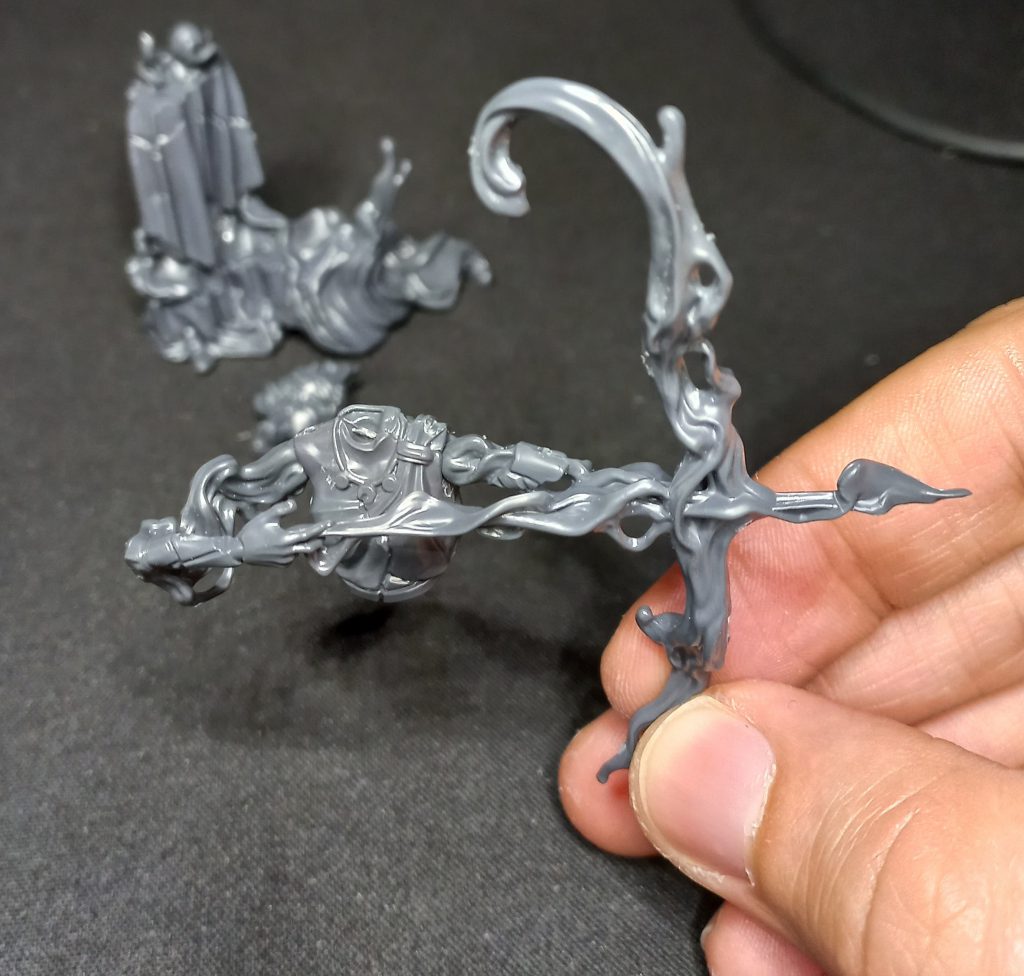 The torso there is just popped in place to check the fit – there’s no glue holding it in place. You could conceivably take advantage of this to swap out bows and melee weapons as needed, although I’d recommend a pinning system just to keep them in place, especially since the melee weapons are all separate pieces per arm. A good pin join should hold them in place just fine though with a bit of care during the assembly stage.

Overall, this is an attractive and very slick kit that showcases Para Bellum’s continuing maturation as a plastic miniatures shop.