Welcome to Ruleshammer, a collection of resources to help explain the detail and complexity of some of the more confusing rules in Warhammer 40k, this week we’re covering some more questions submitted by you, the readers!

Drukhari – Can Dark Technomancers stack twice for units in an Open Topped Vehicle?

Can you apply Dark Technomancers from inside an open-topped transport? The way I read it, points 7 and 9 of the open-topped transport rules (“detachment abilities apply” and “modifiers to the transport’s attacks apply to the passengers”) both indicate that you can overcharge with DT from inside a Raider or Venom. If both do indeed apply, couldn’t you actually double-dip (activate DT on both the transport and the unit inside) for +2D and +2 to wound?

First I think the text of the Obsession is vital to understanding how this is applied:

Each time a unit with this Obsession is selected to shoot, you can choose to enhance any or all of the ranged weapons models in that unit are equipped with. If you do so, until the end of the phase, each time an attack is made with an enhanced weapon, add 1 to that attack’s wound roll and add 1 to the Damage characteristic of that attack, but that attack’s hit roll cannot be re-rolled. If any unmodified hit rolls of 1 are made for attacks with an enhanced weapon, the bearer’s unit suffers 1 mortal wound after shooting with this weapon. If the bearer is a VEHICLE or MONSTER model, it suffers D3 mortal wounds instead.

So specifically it enhances the weapons a model has, and the modifier only applies when making an attack with an enhanced weapon. Part 9 of the open topped rules therefore don’t apply here:

Here the modifier has stopped applying as the vehicle is not making attacks with Enhanced weapons when it’s not shooting. Specifically this part of the Open-topped rules generally applies rarely; units inside suffer modifiers for a variety of reasons because they meet the criteria on their own. Examples of when Part 9 would apply this is for instance when a Transport has had an modifier applied that is active in less specific circumstances. Such as the T’au Neuro Web System Jammer.

Use this Stratagem at the start of the enemy Shooting phase. Pick an enemy unit within 18″ of a BATTLESUIT COMMANDER from your army. Your opponent must subtract 1 from hit rolls made for that unit this phase.

This modifier affects the Unit for the whole phase and doesn’t have any specific conditions like Dark Technomancers does.

Fight Phase – Splitting attacks between weapons that get additional and which models have the Close Combat Weapon?

The short answer is that you get 4 attacks with the Klaws. For a slightly longer answer I’m going to flip this a little, to a Deff Dread with 1 Klaw and 1 Saw. It will become apparent why later on. First things first, in 9th edition there isn’t a “base profile” for Close Combat attacks in the same way that there was in 8th,

This change was mostly to prevent some odd interactions with rules based on how many weapons a model had where technically everything was armed with the Close Combat Weapons as well. So all attacks for a model that has any Melee weapons must be with those melee weapons, unlike in 8th edition where models could always choose to use the basic close combat weapon. With that in mind the Deff Dread with 1 Klaw and 1 Saw effectively always makes 1 additional attack with each weapon, as a player you then get to decide if the 2 Attacks the model has will be with either weapon. So might make a total of 3 Attacks with the Klaw and 1 Saw for instance. This is distinct from melee weapons such as a Tyranid Pincer tail which rules like this

Each time the bearer fights, it can make one (and only one) attack with this weapon. This is in addition to the bearer’s attacks.

Which limits the Hive Tyrant to just one attack with the Pincer Tail, it does have 4 attacks though as well (as the pincer is in addition). If it’s not armed with any other melee weapons, these attacks would meet the “or if it cannot make an attack with any of the melee weapons it is equipped with” criteria required to use the Close Combat Weapon Profile.

Movement Phase – Space Marines – Can units make a normal move after disembarking from an Impulsor?

Can a unit make a normal move after disembarking from a transport which has already made a normal move? Eg from an impulsor. It seems to be played that they can but the rules state a unit in a transport is considered to have moved if the transport has moved and therefore surely cannot move twice?

Unit that are using the Assult Vehicle rule can in fact move again once they disembark.

Because the rule for embarking units counting as making the same move only applies to units that “are embarked”.

For all rules purposes, units that are embarked within a Transport model that has made a Normal Move, Advanced, Fallen Back or Remained Stationary also count as having made the same kind of move that turn.

The are no longer embarked, and this rule does not say units that “were embarked” it only applies to units currently embarked.

Terrain Rules – Shooting from Dense cover, how does that work?

Dense cover has the below exception. Am I correct in thinking that if a unit is in dense cover, shooting another unit in area terrain (or behind an obstacle) the shooting unit has -1 to hit (again assuming the line between passes through both terrain pieces).

Yes. Here’s some diagrams on a few of the many ways Dense can apply and not. 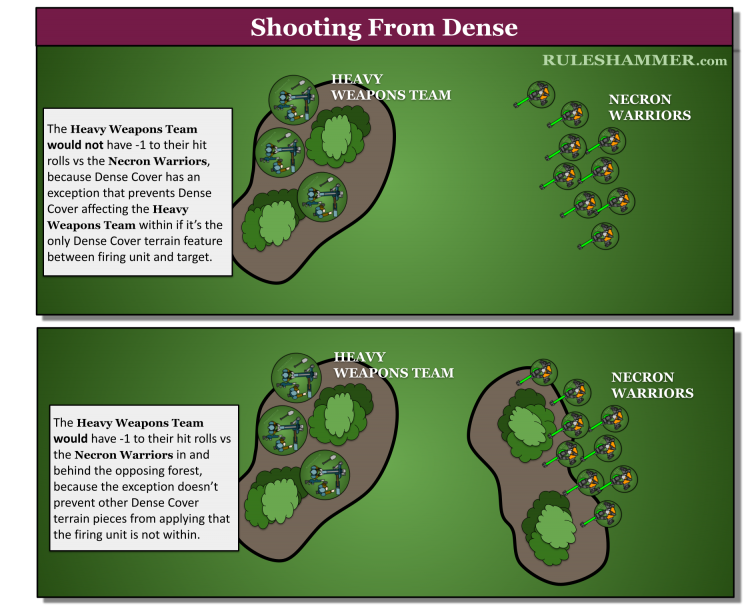 Dense cover is still a bit of a confusing rule – frustratingly, the FAQ we got clarified the intention of the rule while not actually updating the wording of the rule. For more detail on other aspects of Dense Cover and Terrain check the Ruleshammer Terrain guide.