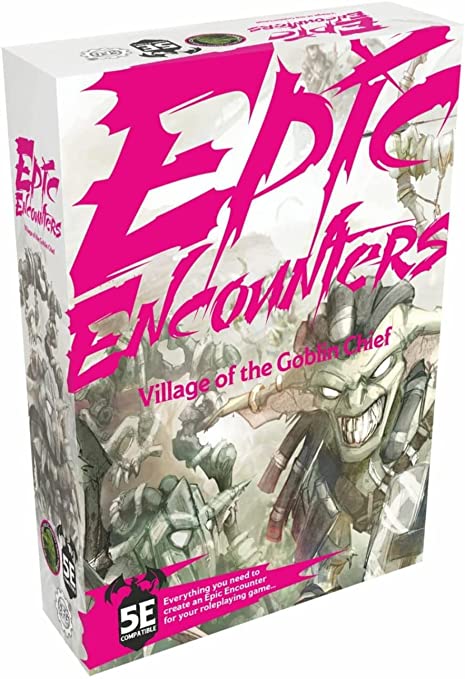 Anyone who has ever run an RPG for their friends or family knows how much work it can be. It’s not just mentally juggling every NPC, monster, and (usually) being the rules adjucator; it’s also the prep. Reading and understanding the upcoming encounter, learning to prepare for the unexpected…and Pelor forbid you’re building your own world and campaign from scratch.

As the one who usually ends up DMing, I have come to embrace premade scenarios for RPGs. They take a lot of the prep out and make things easier on me, a scruffy dad of 3 with absolutely no time left at the end of the day to make campaign worlds out of thin air. While thousands of prebuilt encounters have flooded the market via sites like DriveThruRPs, the thing they typically do not provide are miniatures.

There are, of course, hundreds of companies out there selling minis but this again leads to more work on me, a scruffy dad of 3 with absolutely no damned time left at the end of the day to hunt down minis. Enter Epic Encounters, a line of truly one-box RPG purchases by Steamforged Games. Each box provides 2-4 hours of RPG time that is designed using the d20 SRD (meaning it works seamlessly with D&D).

There are two types of Epic Encouters: Warbands and Boss Battles. While sold separately—and playable separately—they are designed in pairs. In Labyrinth of the Goblin Tsar players will delve a dark mysterious cave system full of goblins who have sworn fealty to a Goblin Tsar. Upon defeating him they discover a more sinister evil lurking in the shadows that can be faced in Web of the Spider Tyrant.

All of the Warbands are designed this way. A menu of hooks provide various reasons for your heroes to venture into the encounter, making it easy to drop into whatever existing campaign you’re running. The Goblin Tsar encounter includes 6 hooks, ranging from human survivors telling tales of a rising goblin power to creepy news of insects emerging from the ground and homes, terrorizing local folks. At the end you face a (mini)boss and reveal a segue way to the boss encounter.

In addition to the hook, there are a few pages of establishing lore to help ground the DM and players in the immediate world though it is necessarily generic. Goblins are what you expect for the most part, and they have to be to fit seamlessly into the “5th Edition of the world’s most popular RPG”.

Boss boxes also include lore and hooks should you decide to drop them into your ongoing campaign without the establishing Warband scenario. Despite being familiar monsters (I have Large Hydra and Large Spider), the actual encounter and design of these creatures is exciting.

What’s in the Box?

Available for $35-$55 USD depending on what and where you shop, an Epic Enounters box includes everything you need to run an RPG night. In addition to the actual encounter it comes with a foldout battlemat, tokens, and between 1-20 miniatures depending on the encounter.

There’s nothing to complain about with regard to quality. The map is sturdy and durable, it almost feels like it’s made of a plasticy vinyl vs paper and should stand up to repeated use (and folding). The minis are of course, fantastic. Steamforged has been making detailed PVC minis for years now and it shows. While the detail does not quite hit GW level (nor would I expect it to given the price), it is heads and shoulders above anything else on the shelf at my FLGS and work has been done to make the minis characterful and unique. The goblin minis are far from generic.

Boss miniatures are suitably imposing. While you only get 1 miniature in the boss boxes, the sheer size makes up for it. They’re enormous. Plopping one of those down on the table will definitely make your players sit up and understand they’re facing something powerful. Notably, Boss box adventures may include mobs from the associated Warband box but do not include any miniatures; if you don’t have the corresponding Warband box you’ll have to make do with included cardboard tokens.

Steamforged can’t say Dungeons & Dragons in their advertising, but luckily I can. When I say these adventures drop seamlessly into your RPG night I do specifically mean Dungeons & Dragons (and anything using the d20 SRD). If you want to use them in any other system you’ll have to do some additional work.

If you are playing D&D however, it works great! A detail I particularly like is how flexible they can be. Labyrinth of the Goblin Tsar is designed for levels 5-10, however some basic work has been done to ensure you can use them at any time. Many elements like traps say they deal “standard damage” which is defined on a table based on the level of your party. Higher level adventurers? They’ll take more damage from a tougher environment. Difficulty checks are higher as well While a bit of work is necessary to make the monsters harder or easier that is the easiest kind of DM work: just add or subtract HP and damage dice. The numbers are made up anyway! 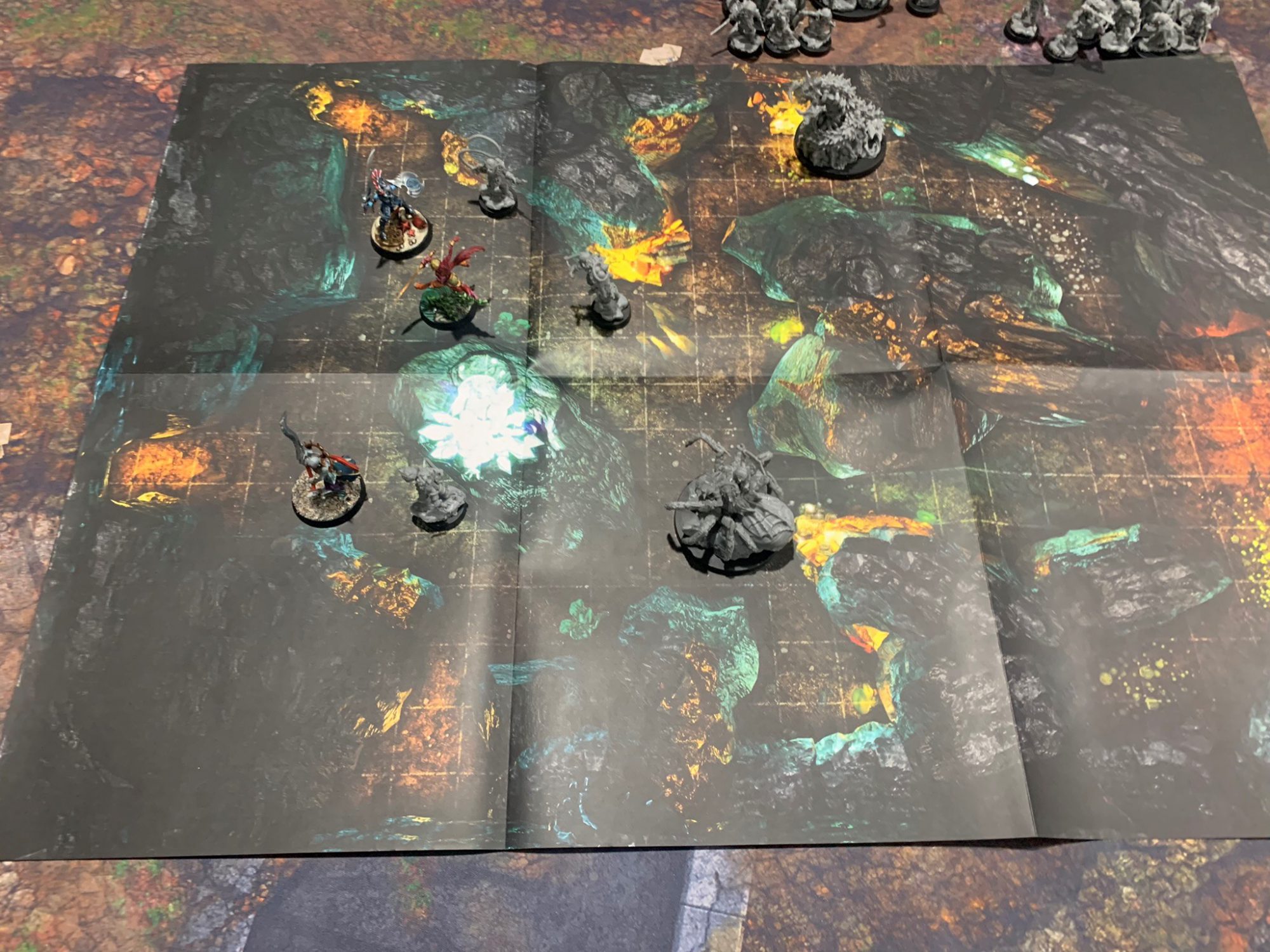 Bosses are given an even more intricate scaling system. Because each boss box is a single encounter, a lot of great work is put into making this memorable. It goes far beyond the idea of “Lair Abilities”. The Web Tyrant encounter includes attack sequences, environmental effects, alternate strategies for players and the big bad, and more. If the Warband boxes feel a touch generic, these feel like a brain dump from a master DM.

Accordingly each boss is in fact 3 different bosses based on the level of your party. At the highest level the boss includes special Legendary Abilities that will push your party to the limit. While I like both types of boxes, it’s the Boss boxes that truly shine. Given enough time I could build a scenario like Labyrinth of the Goblin Tsar and there is enough info in my Monster Manual to tweak goblin wizards. The Boss battles, however, are far beyond my ability to design and balance.

The primary differentiator between the Epic Encounters line and the ocean of adventures available online are the physical goods. Full-color full-art battlemats provide an ambience that is driven home by the miniatures. This does mean that the primary audience is folks who play with maps and miniatures. For those of you who do go all-in on grids, however, the entire line is worth a look.

When I run a game of D&D, I tend to go for theater of the mind. My “maps” are quick sketches on a whiteboard and there’s rarely a miniature to be found. I would use one of the Boss minis to set the stage, but I don’t personally mess around with grids and movement specifics. I personally would lean towards the Boss boxes. The custom built enemy and environmental battle are beyond my ability to design and I’m happy to outsource that.

Overall, I think this is a great product line with a bright future. Its ability to slide seamlessly into existing campaigns can’t be overstated and it also allows for the miniatures themselves to be used over and over, whether you’re running one of these adventures or not. It’s a true one-stop option, which this dad of 3 with no free time is excited about.