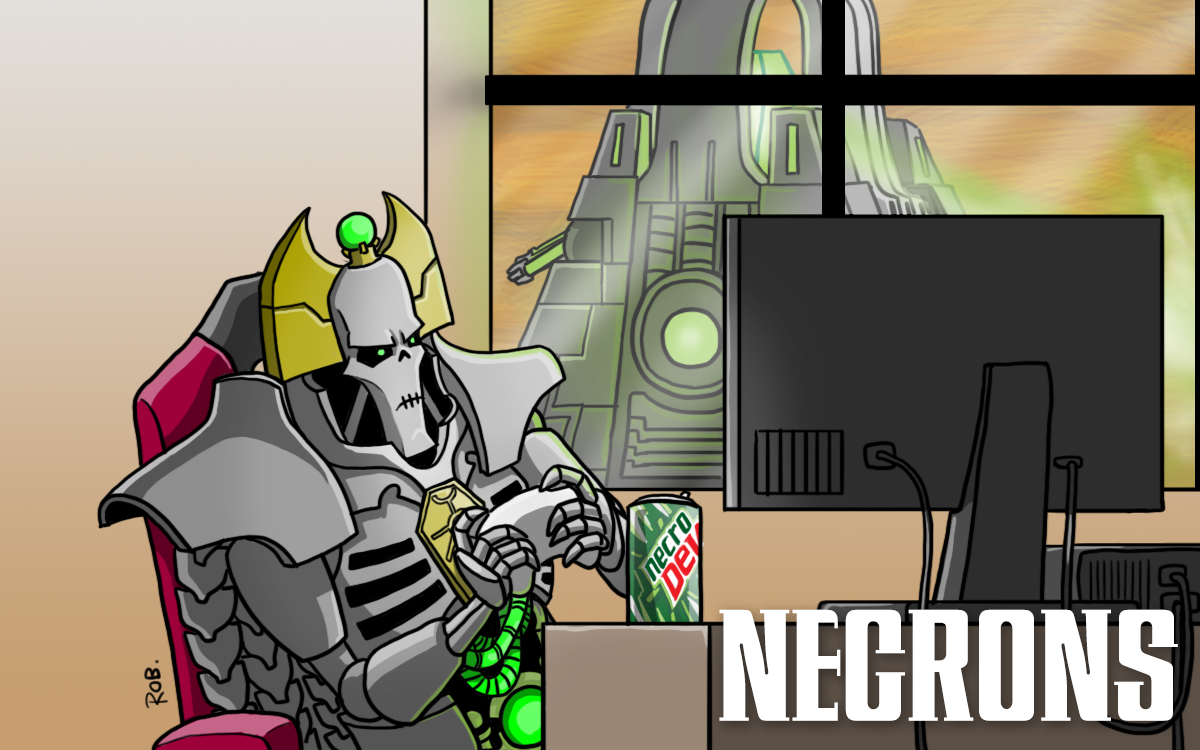 A month in to the glorious new era of Necrons being actually fun to use competitively, we today received the first FAQ for their new Codex. This covers several of the questions that we had about some of their exciting new rules, leaving only a few mysteries in its wake, perhaps to be covered in a future update.

Today, we’ll take a look at the changes and then quickly cover the few things that it would still be nice to have some clarity on.

Probably the most exciting clarification in this FAQ is that, when you use the Deceiver’s Grand Illusion ability to pull units into Strategic Reserves, it neither costs you CP nor counts towards your maximum number of reserved units.

This substantially increases the potential use cases for this C’tan, where up till now they’ve largely been overshadowed by the Nightbringer (because of what a terror they are in melee) and the Void Dragon (because they’re active in multiple phases and have reliable ranged MW output). In some matchups, pulling key units into strat reserves once you know you’ve lost the roll-off is hugely beneficial, and stacks on top of the already strong utility of being able to redeploy based on where your opponent is strongest. Removing the cost also plausibly opens up some weird skew builds somewhere along the line, and also means that if you decide you want to pull the Deceiver themselves into Reserves (if you want them on the table only in the case you go first, since they do have Dimensional Translocation) you don’t pay through the nose for it. Even just using it to make strat reserve pulls you were already planning free is a boost, given that Necrons now want every CP they can get!

I’ll certainly be at least trying the Deceiver in my C’tan slot a few times now, especially in lists that can already hold their own in melee by other means.

Unique C’tan powers can only be taken by their designated C’tan.

This was incredibly obviously the case, but nothing in the rules actually specified it, and I’m always happy to see GW tidy up edge cases like this.

The Silent King’s ability to activate a Command Protocol you didn’t select for a battle round on demand has been updated to reflect the fact that, because of his mandatory warlord trait, you will always actually have two unselected protocols when you use him. It has been clarified that you get to pick which one of them you activate, making an already neat ability even better. Plausible uses include hedging between Eternal Guardian and Sudden Storm for the first battle round, and also keeping both of Conquering Tyrant and one of the defensive ones in reserve.

The Ancient Machineries secondary has had its wording updated to take account of the fact that there are deployment maps with two objectives in neutral territory. No real functional change here, as this was the only sensible way to play it, but again good to have it tidied up.

The Territorial Imperative Agenda accidentally earned you victory points rather than experience points in the book. This has been corrected. Mild to moderate shame on anyone who tried to use this to cheese a win in a narrative game!

The timing on Metallophagic Atomic Decouplers has been upgraded so that it actually works, making it a neat upgrade to drop onto a Warrior, Immortal or Tomb Blade unit.

What’s Still Up in the Air?

The good news for Necron players is that the Codex is, all together, pretty clean – with the luxury of a ground up re-write that doesn’t have nearly as much of a legacy range to handle as Marines, GW have put out a Codex properly tuned to 9th’s rules. The biggest question that was going to straight up determine whether a unit was valuable (the Deceiver) has been sorted out, and most other questions have at least a clear RAW answer that can be played with. Having said that, there are a few outstanding things that I still think could use a look, notably:

There are a few other niggles that people aren’t 100% sure on, but these are the main ones we’d like to see cleared up!

Altogether – good news for C’tan fans and good news for people who like rules clarity – a few important things get tidied up, and the overall improved strength of 9th’s rules gets shown off by how much shorter this document is than others we’ve had in the past. If there’s anything we’ve missed, hit us up at contact@goonhammer.com.