The Importance of Narrative: Warp’s Edge Review – Board Hammer 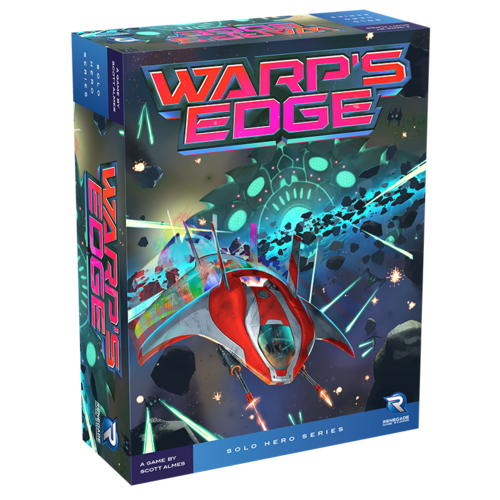 Warp’s Edge is familiar in more ways than one. The setting is a sort of neon corporate sci-fi with humorous robots that reminded me a bit of The Outer Wilds. You play a solo pilot facing down a large mothership and its fleet in a desperate gasp at victory; die or fail to destroy it and you loop back to try again like Edge of Tomorrow keeping your upgrades in an abstract representation of having more knowledge. Warp’s Edge is familiar, however it does just enough with its systems and story to make it worth recommending.

Designed by Scott Almes—of Tiny Epic Noun fame—Warp’s Edge is the second game in Renegade Game’s Solo Hero Series. It’s purely solitaire with no multiplayer option, however there are two modes of a sort. To start your space adventure you’ll grab one of the four ships, a permanent upgrade, and choose a mothership to attack. Each ship is different, defined by a unique ability and suite of 5 POWER tokens that each provide strong effects. The skills will be different, your ship will be different, and every mothership requires a different strategic approach. However, this is the kind of variability that doesn’t necessarily impact replayability.

The details will change but structurally every play will follow the same formula. You’ll toss a few tokens in your bag, initially made up of some low powered lasers, maneuvers, and energy. Lasers and maneuvers are used to destroy enemy ships (stunned, if you don’t finish them off) while energy is used to purchase upgraded tokens including those special POWER tokens. Enemies can be blasted to bits or dodged depending on the tokens you assign to them, and either method of finishing them off will net you more tokens or instant effects. Each ship also has a POWER token colored yellow, to signify that you get to toss one of those into the bag at the start as well.

With this small bag of tokens you’ll embark on your first “warp”. Tokens are drawn from the bag 5 at a time, and assigned to various actions. Lasers and maneuvers can be assigned to enemies (including the Mothership) to stun or destroy them. An enemy that has a token assigned to it, but not enough to defeat it, is stunned and won’t shoot back at the end of the turn; destroyed enemies go to the discard and provide a bonus. Most of the time it’s another token for your bag, but sometimes they’re abilities like drawing a few extra tokens to use on this turn. Energy tokens are spent to buy additional tokens, often more powerful versions of what you’ve already got. Like all deck/bag-building games, at the end of the turn you discard unused tokens and refresh. In this case, it means refilling the enemy row and drawing 5 more tokens.

A warp ends when need to draw during the clean up step or if your ship is blasted out of space. At this point your ship’s Savior Protocols kick in and you get to start over. Newly acquired tokens are added to the bag (representing your knowledge of the enemy), and the enemy discard pile is shuffled and placed back on top. This is a key design element that works well which I’ll touch on in a minute. Now you begin again, drawing tokens and attacking enemies with the key difference that enemies may be a bit tougher; during set up you stack the enemy deck so that ships arrive in an ascending order of difficulty but since they’re all shuffled together during reset it’s possible to see some stronger enemies right at the start of subsequent warps. Good thing you’ve got stronger tokens!

Honestly, my initial play of Warp’s Edge was not terribly compelling. We’ve seen all these systems before. In particular, Warp’s Edge follows a formula that is endemic on Kickstarter these days: a dash of input randomness followed by a series of microactions implemented via bright colorful chits and tokens. No individual action has any particularly meaningful impact, but after a few minutes of manipulating components around the table something Big Happens and you get Better at The Game Thing. In this case you draw some tokens that have a narrative definition but are essentially defined by color, assign them to ships, and get more tokens. Eventually you or the Mothership explodes and you pack up.

However, Warp’s Edge drew me back to the table thanks to an included narrative booklet. Written by Banana Chan, an RPG designer who has recently turned her stellar writing and design chops towards board games, this booklet is a 7-part Choose Your Own Adventure narrative that tells the story of pilot Taylor Minde. You’ll shape their emotional connection to earth, their tactical approach to combat, and interact with some NPC robots on the ship. It only takes about 10 minutes to read through, and functionally it replaces the random elements of set-up with selections based on your narrative choices. More importantly, it provides stakes.

The narrative booklet provides just enough immersion to shift the game from an exercise in gaming to a tense space battle against a familiar foe. Your ship’s personality has a purpose, the cards coming out of the Skill Deck reference elements of the story, and your Mothership opponent represents the nemesis responsible for your journey becoming a solo trip. It doesn’t change the game itself, but it changes the reason for playing just enough to bring me back to the table. I’m glad it did, because repeated plays revealed that the familiar system is deeper than it appeared.

As I noted, defeated enemies are reshuffled and placed back on top of the enemy deck. Because you can stun enemies by assigning just a single token to them, it gives you quite a bit of control of the tempo of the game.You can opt to play aggressively, tearing through the bad guys and filling your deck with tokens at the cost of bringing more powerful enemies into play for every subsequent warp. Damage taken by shields causes you to burn a token from your discard pile, which can be brutal or desirable depending on whether or not you want to thin your bag of low value tokens. Aggressive early attacks will give way to delayed stalls late in the game as you focus on the mothership and allow enemy attacks to thin your weak tokens in preparation for the final warp. Every decision made carries a dual weight, which makes the game tactically interesting while reinforcing the narrative.

It’s worth noting that it’s possible that my first play fell flat because of my set-up choices. My ship had a low shield rating, effectively eliminating the opportunity for strategic bag thinning, and the Mothership could only attack or be attacked if every enemy ship in the deck had been defeated on that warp. This meant there was little incentive to stun vs destroy, no reason to deliberately take shots, and made the play fairly one-note. I’m glad I discovered a deeper experience however I think it’s worth pointing out this situation given there are only 5 Motherships and 4 Hero Ships

If you’ve never played a solo board game, we put together a list of good ones at the start of this whole pandemic thing and now we can add another. Generally speaking, games that are designed specifically for solo provide a cleaner experience and Warp’s Edge is not an exception. With the narrative stakes raised by Chan’s story, Almes design is given the chance to breathe and shine. The production quality is high, and it feels like a game that can be readily expanded—so long as that expansion includes a new story book.