Hailing from the forgeworld of Ryza, the Warmongers are famed for their fearsome plasma weapons and reactors that fuel them. Their rules let them build Titans that are just begging for you to mount the biggest, nastiest, most shield-drainingest weapons you’ve got, then push to move them around the battlefield aggressively. 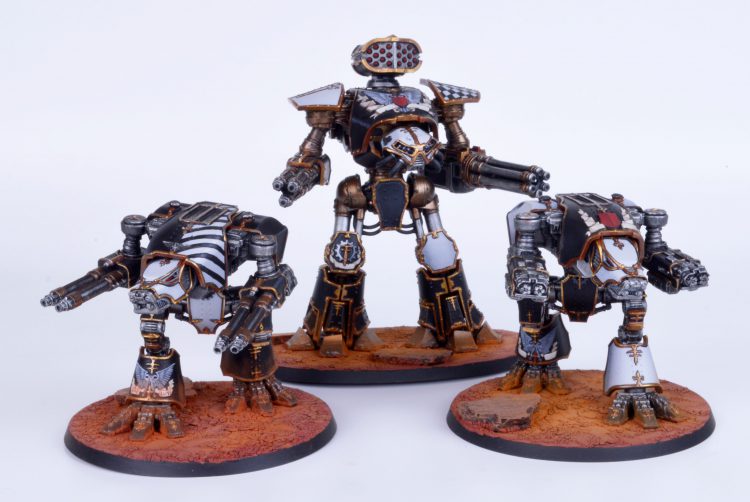 It’s hard to talk about Legio Crucius without mentioning their main Forge World, Ryza. In both the Horus Heresy setting and Warhammer 40,000, it is one of the most powerful and advanced Forge Worlds, second only to Holy Mars. It is particularly famous for it’s plasma technology, resulting in the Legio being one of the best equipped in the Collegia Titanica.

Legio Crucius were known to be incredibly analytical, even amongst the Mechanicum. They foresaw that one day they would one day face other Imperial Titans on the Battlefield and prepared for this day through extensive wargames. At the outbreak of the Heresy, they rallied with the Loyalists and took part in the defense of Molech against the Warmaster’s forces. 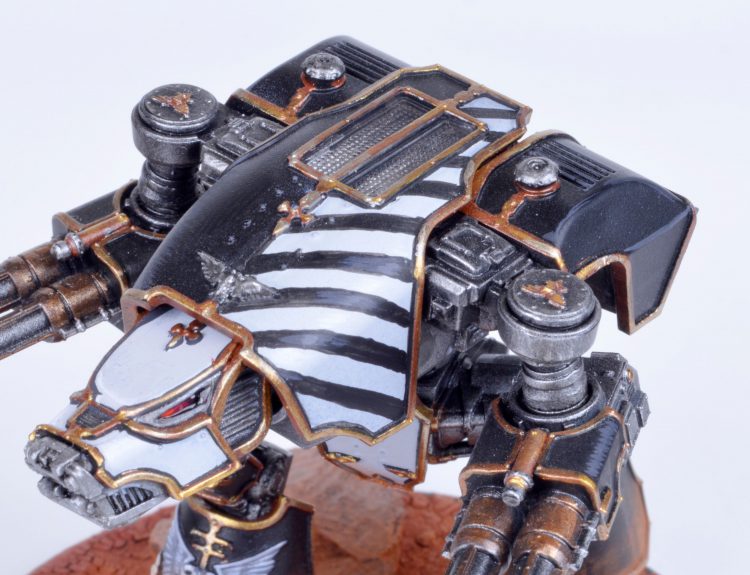 We asked @davetaylorminiatures on IG for his method of painting up his gorgeous Warmongers battlegroup.

When it comes to the painting, I basically built the titans and left the armor plates on the sprues.

I primed everything with GW Chaos Black and painted the titans in my usual “metal robot” approach, which is: 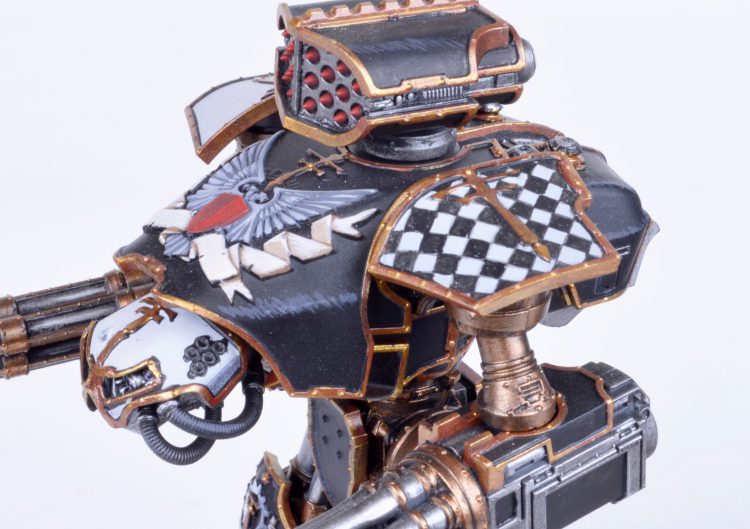 The bases were basecoated with VMC Red Leather, before being covered in GW Martian Ironearth. Once the Ironearth had dried I put a thin wash of GW Agrax Earthshade over it. The final step was to slather the base and lower legs in a rust pigment from Secret Weapon Miniatures. 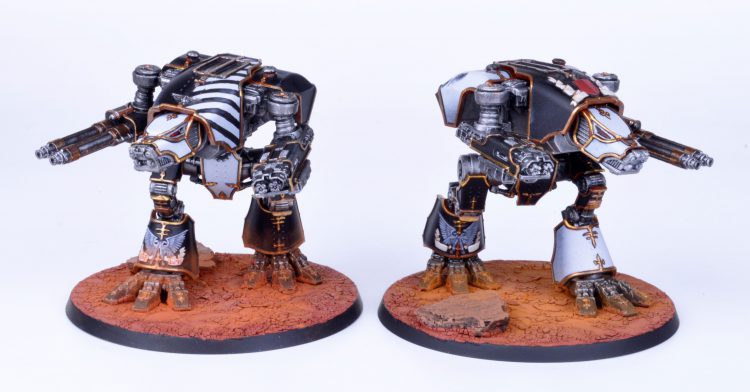 Legio Crucius were initially added to the game in the Doom of Molech supplement but will take center stage again in the upcoming Defense of Ryza supplement. Taken together, their rules give them some of the best heat-management tools in the game, allowing them to push their reactors more aggressively to move faster, hit harder, and shrug off hits in situations where other principes would just let their voids collapse.

Forgeborn lets you reroll any repair dice of a 1 during during emergency repairs or during the damage control phase. Compared to the Warp Runners’ Veteran Princeps, this is usually weaker, but will sometimes result in more re-rolls than you’d get otherwise. This is particularly true of the Warbringer, which is more likely than not to roll at least one 1 on its repair dice, but doesn’t benefit from the second bonus die that Astorum Warlords get. Just remember that this one only works in the first two battle rounds, so you’ll want to push early, and push often.

Pride of Ryza allows Warmongers Titans to use a repair dice result of a 6 to vent two heat instead of one. Normally, you’d use these to reignite void shields, raise shields, or even repair off critical damage, but if you’ve built Titans that run hot, this is an excellent way to vent off another point or two of heat each round, letting you keep your reactor in check over the entire game.

Terminus Override Systems – For 30 points the first time a titan would require to roll on the reactor overload table, you may immediately perform shutdown orders instead. Given this can only be used the first time you roll on the reactor table, you would have to be in the red pip to really justify taking shutdown orders instead of losing your voids or hits to the body. Generally speaking, you would have to be pushing your reactor very hard and be rolling poorly for this to be worth it.

Condit: Really the problem here is that you’re paying too much for this effect. There’s an edge case for a reactive shutdown that (with smart positioning, anyway) lets you vent overheats without having to take actual Shutdown orders, assuming you’re able to set the Titan up so that it can hid from most of the enemy battlegroup. However, the value of that effect is probably a bit overcosted at 30 points, and in most circumstances you’re probably better off risking orange-lining and hoping for the best.

Ryza’s Techpriests save the best for their Legio and this shows with the Bi-folded Power Containment upgrade. For 30 points, when firing a weapon with the draining trait you roll a d6. On a 4+, you roll two reactor dice and choose the result you prefer, but on the result of a 1 you have to roll twice instead and keep the worse result. In math terms, you usually have a 16.7% (or one-in-six) chance of rolling a “freebie,” double heat, or awakened machine spirit. However, with this upgrade you’re looking at about a 13.9% chance of advancing by two, 12.0% chance of awakening, and a solid 21.3% chance to not generate any heat every time you push your reactor.

This upgrade along with your traits is begging you to fully abuse your reactor. Here’s a few loadouts you might check out:

The Princeps Senioris of Legio Crucius have some interesting traits to pick from, and while some of these may not be your first pick they give some variety and flavor to your maniples.

Mechanicum Born allows your Princeps to reroll a repair dice, but must keep the second result. Combined with all the other traits and wargear, this will help keep even the most unruly plasma reactor in line. Probably not your first pick, but a solid complement to a Princeps Senioris who will be pushing in everything to the limit.

Black Banner provides you with a tertiary objective worth 5VP, providing you haven’t already got one to keep your Princeps Senioris from being destroyed or structurally compromised. Given that your Princeps can be a fire support Warlord parked on your back line and packing at least one Belicosa, this could be a reasonably-achievable 5VP, tipping the scale in your favour from the start. However, be careful – using this trait is begging your opponent to nominate your Princeps for their Tertiary, creating the potential for a massive swing. You’re going to have to keep your Princeps safe if you want to avoid that.

Collegia Lord – When your Princeps is issued an order, on a roll of a 9+ on the command check you may issue this to all other titans in the maniple without a command check. The slim chance of occurring combined with the usual trade  off with issuing orders makes you wonder how often this will be useful. However, it could lead to one hell of an alpha strike with first fire, provided your opponent doesn’t proceed to arc dodge you. If you want to roll the dice and take a chance on a huge payoff, this trait might be for you. Just keep in mind that that payoff isn’t very likely.

Condit: This will also require you to issue all your orders at once, which is rough – a lot of games will find you daring your opponent to be the first to declare First Fire so you can lock in his arc and dodge it with the things you’re trying to protect while trying to delay your own First Fire orders as long as possible. Fishing for this will require you to front load, giving away more of your plan for the turn and taking away the ability to respond to enemy orders. 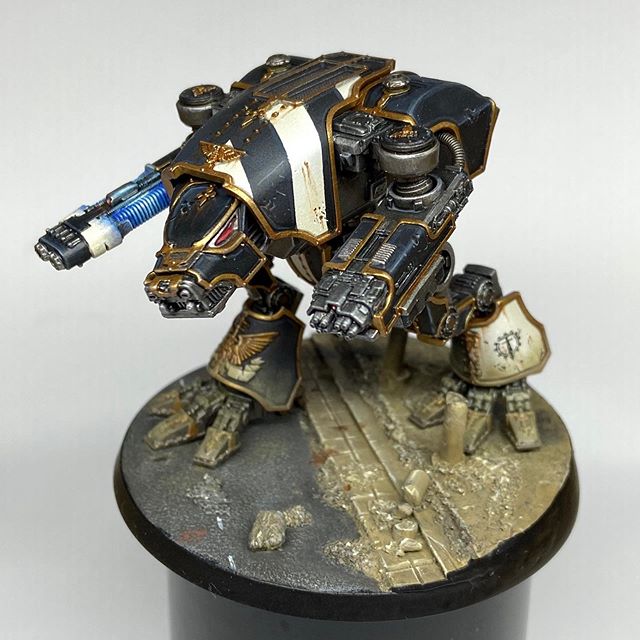 Legio Crucius Princeps should consider taking Titans with larger reactors to make the most of their Ryzan heritage. More Servitor Clades grant more chances for Forge Born and Pride of Ryza to trigger. Larger Chassis with carapace weapons also give you more opportunity to tax your improved reactors further.

That said, their traits and wargear do work with all chassis – so don’t feel that you can’t take Warhounds. They need all the help they can get with managing their reactor!

We would suggest checking out some of the Maniples below:

With all that in mind, let’s take a look at a 1500 point list which takes advantage of the unique rules Legio Crucius offers. This list is a solid starting point for a beginning player, but also has plenty of options for a veteran to play around with:

The Ruptura is a great complement to the Crucius playstyle. You want to push hard and early, to make your mark on your enemy before they can really strike back. They normally follow the same formula to how they play out.

Melta equipped Reavers will use the maniple’s free Power to Locomotives movement to close into fusion range and strip shields with their megabolters along the way. The Warbringers struggle to break shields on their own, as usual, and rely on the Reavers to do the heavy lifting until the shields are down to cause serious damage. The Warbringers are where the Bi-Folded Power Containment upgrade really begins to shine, allowing them to push their reactors more often and more safely than normal, and with such a massive reactor track to begin with this makes them very deadly. Being able to fire their weapons that already have Draining and then getting the chance to push for Shieldbane as well, if needed, makes these titans deadlier than usual.

On the Princeps Senioris we have opted for Iron Clad Tyrant as you will often want to take either Split Fire or First Fire orders and want to improve the force’s reliability. Normally you’d look at Swift Killer for a gunline list, but the Warbringers’ 2/3 manoeuvre value combined with Crucius heat management means you probably won’t need it in order to line up shots, and can focus on ensuring you shoot as often as possible instead.

If you want to go all-in on your legion’s theme, you could consider taking more volcano cannons – they’re powerful, and you’ve got the heat-management tools to fire them in the early game without having to worry too much about melting down immediately. You could also swap one of the Reavers out for some Lancers for some more close range punch (or just take a banner in a larger game.

With their superior heat management, expect Legio Crucius engines to be pushing their reactor more often than usual in the opening turns. Otherwise be especially mindful of any heavy hitters with Bi-folded Power Containment by arc dodging or the odd Obscuration Barrage or Blind Barrage.

You’re likely to be looking at larger Titans to take advantage of their repair-focused legion traits, so consider bringing flakers and harassment units to hit them where they least expect it. Just be careful about committing Knights – you’re likely to see more volcano cannons that you might in other matchups, putting your banners at serious risk. 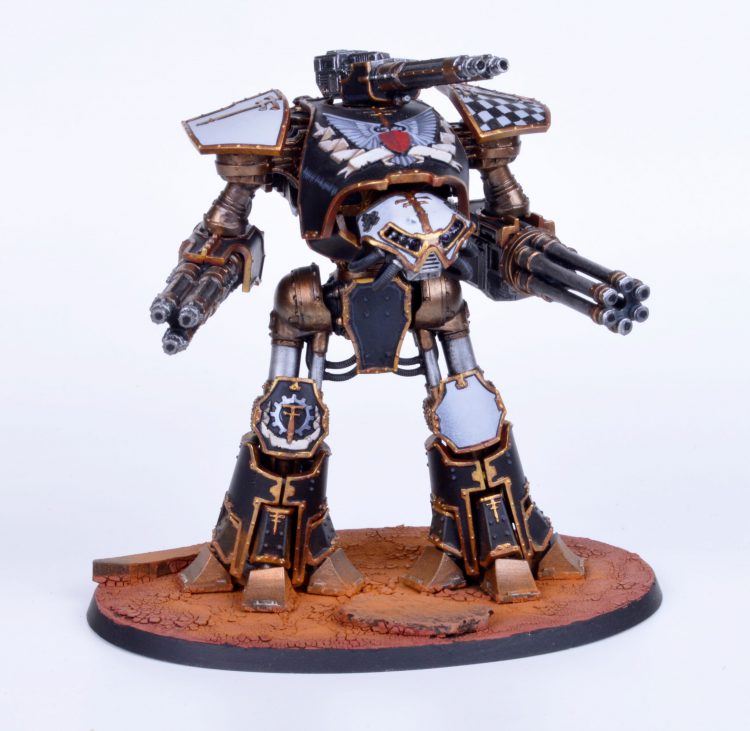 The Warmongers have some flavourful rules which resonate with their fluff, allowing your push your reactors further than others would dare. Lean into this when building your Maniples and you’ll be able to burn your opponents to ash – so long as you don’t burn out first.