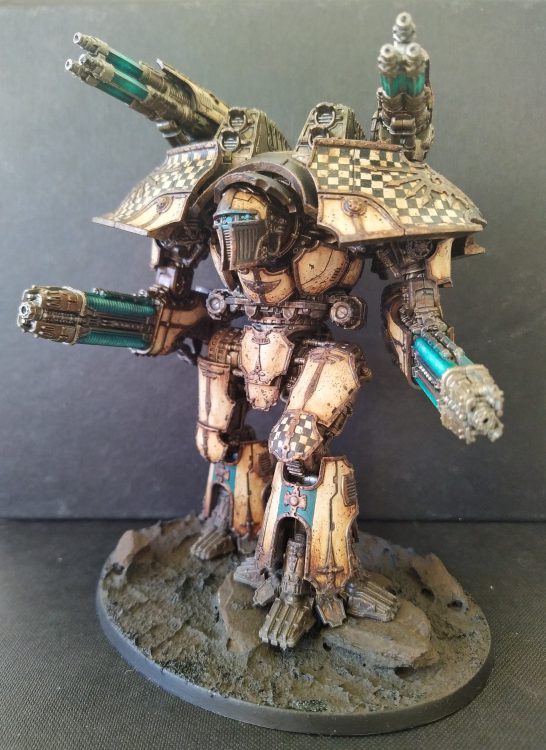 The Imperial records are pretty sparse on the stoic Sentinels of the Edge, who were normally found at the Imperium’s frontiers. They would vigilantly guard newly reclaimed worlds as the Great Crusade expanded outwards, caring not for glory or personal reknown.

It was only with the Betrayal at Calth that they were recalled from the fringe to halt the traitor’s advance where they would go on take part in the Shadow Crusade.

Soggy: They were first introduced to the universe in excellent Betrayer by Aaron Dembski-Bowden, where a Lysanda Warhound nearly squished Lorgar. If that isn’t enough to sell you on them, I don’t know what is. 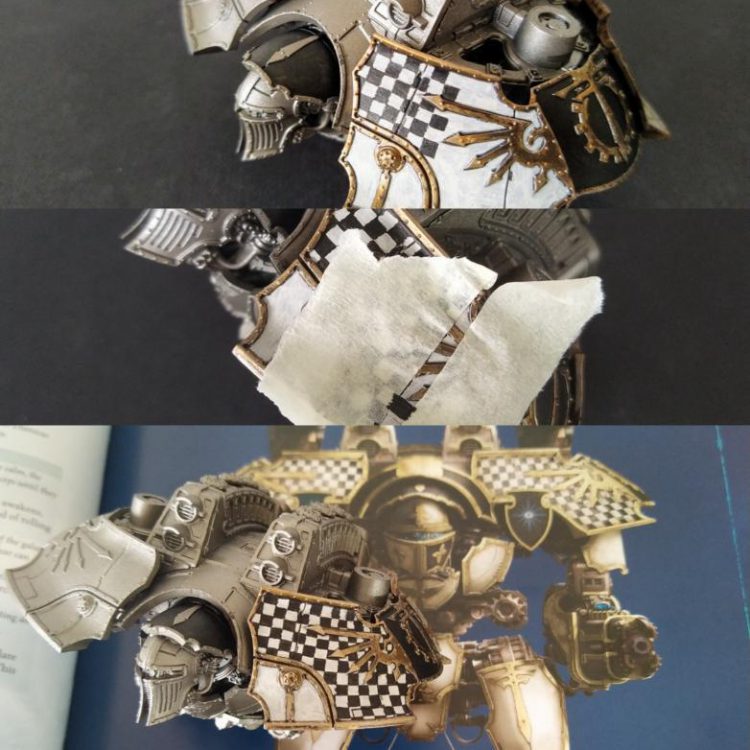 Metallics – Base Leadbelcher, washed with Nuln Oil and Agrax Earthshade and weathered with some Typhus Corrosion.

Brass – Warplock Bronze base, followed with Brass Scorpion and Runelord Brass finished with a wash of Agrax Earthshade 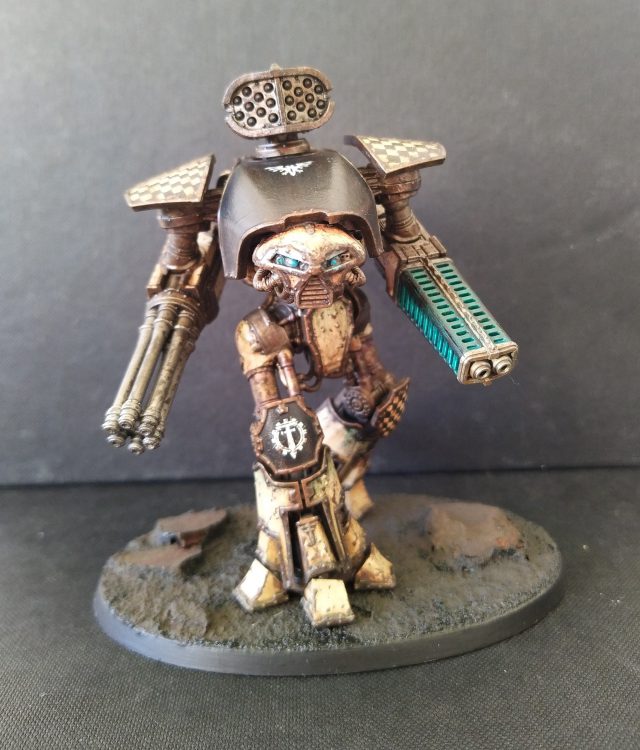 Lysanda are characterized by their patient approach to warfare, not letting their own emotions or their Titan’s machine spirit get the better of them.

Patience Beyond Measure allows a Lysanda battlegroup to deploy all their units at once and allow their opponent to win the initiative roll-off for the first round in exchange for adding 1 to all hit rolls and Command checks in the first round. You won’t want to use this in every game, but played right it can be very powerful. It’s also important to mention that this trait is unusable in some Narrative missions, but we’re sure your opponent might not mind considering what they get in exchange.

Bair: I like this a lot. As someone who always struggles with deployment anyways, getting a bonus on the first turn is pretty awesome. I can see a Lupercal making great use of this with their excellent movement being able to reposition anyways.

Stillness of Mind is a fairly niche trait – it lets you add 2 to the die when you roll to see if you can clear Shutdown. Shutdown still isn’t a great order to issue in most situations, but Lysanda are a lot more likely to be able to get back in the game once they use it. This isn’t a trick to rely on, but it does make Shutdown orders slightly more appealing if you’re redlining.

The Sentinels’ unique stratagem, Frontier Guard, improves the BS and WS of all their Titans by 1 so long as they’re within 6” of an objective marker for their victory conditions. Unfortunately, most of the matched play missions so far don’t have objective markers. However, if you luck into a mission that has them (or are running a custom mission like The Devouring of Chipotle IV), spending 2CP for a boost to hit on Titans who are contesting objectives could be useful.

Mantle of Responsibility is one of their standout options, especially on larger Titans. It lets you re-roll results of 1 or 2 on Command checks. This will make most of your failures on Command checks re-rollable, and is more likely to come into play the larger the Titan is. One potential downside: rules as written, this only triggers on results of 1 or 2, not unmodified results of 1 or 2. That means that if you put it on a Warhound in a squadron and issue it a squadron order, it’s actually even less effective if you issue the order to 2 Warhounds, and won’t work at all if you issue a squadron order to 3 Titans at once – adding 2 to the roll means it’s impossible to roll anything less than a 3.

Condit: Reliable access to orders is huge, and this is one of the better effects in the game for it – at 15 points, it’s a steal.

The standout personal trait here is Vanguard Leader. It gives your Princeps a 3” aura that allows it and any other friendly Lysanda Titans within 3” to boost their speed without pushing their reactors. This will let you move a bit faster while still freeing you up to use your reactor for other effects. It’s also just wide enough that if you’re careful with your spacing, you won’t have to worry about getting hit multiple times by the same Blast weapon.

Bair: I absolutely love this, and this might be the strongest part of Lysanda over all even. It’s just so good. Putting this in a Lupercal or Ferrox and letting those hounds MOVE at least for one turn without pushing is incredible. I can’t count the amount of times I decided to push a hound for movement and went immediately into orange for it to nuke itself 2-3 turns later.

Serene could be interesting in certain matchups – if your opponent has access to Command debuffs or ways to force you to re-roll successful Command checks, taking this and Mantle of Responsibility will help ensure that your Princeps’s Titan is as likely as possible to take the order you issue it. However, this won’t come into play in a lot of games, and even when your opponent has access to these tricks you’ll often be better off with Dominant Strategist or Swift Killer.

Harrowed by Betrayal, like most of the other traits that trigger off of an Awakened Machine Spirit, probably isn’t worth taking. It could lead to an extra out-of-sequence shot every so often, but even pushing aggressively won’t lead to your Princeps’s Machine Spirit awakening that often. 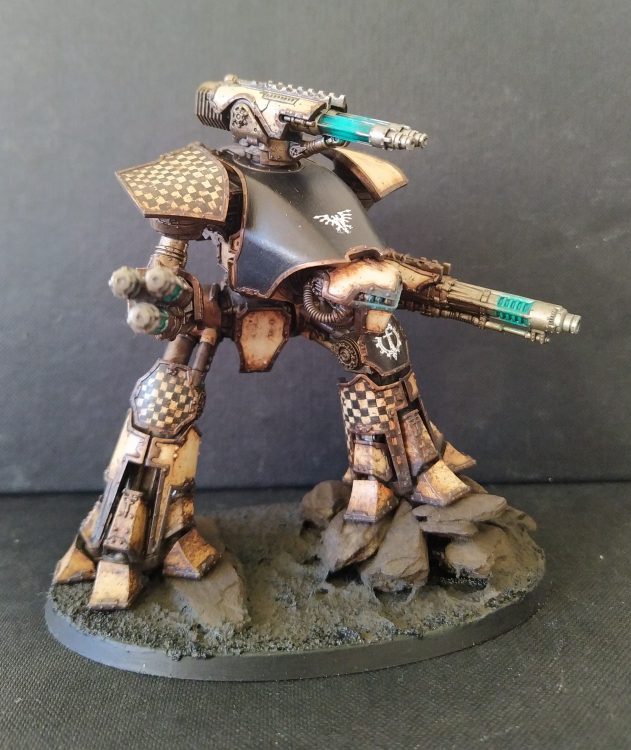 Legio Lysanda’s traits don’t overly favour a particular chassis or maniple, which gives you the flexibility to build your battlegroup the way you want to. There are a few amusing synergies that we would like to highlight, though.

Vanguard Leader is fantastic and works well with any battlegroup that stays close to each other or wants to move quickly. This gives Warhounds in a Lupercal or Ferrox maniple some solid reliability as they close in on their target or can allow for a surprisingly mobile Fortis or Regia maniple.

It’s important to remember it’s optional, so once the table has been set up with terrain and you can see what you’re up against you can weigh up the risk.

As we mentioned earlier, Mantle of Responsibility leans towards larger Titans or a Warhound Princeps Senioris to get the most use out of it.

With this in mind, let’s take a look at an example Lysanda battlegroup which takes advantage of a number of their abilities – including Patience Beyond Measure, if you’re willing to take a chance.

The Corsair maniple is one of our favourites with the flexibility it offers you in both movement and what roles you give to your Reavers. The Reavers in this force have been built with different roles in mind: a long range fire support, a close range brawler and a melee cruise missile. These loadouts can easily be tailored to your play style; you can play far more aggressively and take some knights in place of the Warlord along with more combat weapons on the Reavers if you keep them close together for the free movement buffs. Or you can focus on the extra hits in the first turn and go all out with apoc launchers to knock down shields, then back them up with some volcano cannons and laser blasters to rip apart the enemy turn 1.

Bair: I really like that this Legio doesn’t lean towards one or two particular play styles like so many other legios do. You can find what works best for you and then make this Legio work for you. Very solid.

Once the table has been set up and your objectives set, you’ll need to decide if you’re up for using Patience Beyond Measure. Consider both your and your opponents objectives and how they will likely deploy in response to you putting down everything at the same time. Terrain is all important if you use this or not as well. Ask yourself a few quick questions: Am I likely to shoot at least half of my weapons in the first turn? The weapons that I will be able to fire, do they need the +1 to hit to be more effective or are they mostly blasts? Is my opponent likely to hide behind terrain for a turn to avoid the extra hits? This could be a massive benefit if you have chosen Hold the Line as it may keep your opponent back further in the first turn.

Bair: Terrain and deployment type will be the largest factors in whether or not you use this. A good table will have plenty of terrain for your opponent to at least force shots with negative modifiers before moving out of cover.

In terms of deployment, the two close range Reavers should deploy together to spearhead into the center of the table. The third Reaver can stay in the backline or push up as well, depending on the table on the day.  The Warlord will play a traditional fire support role in the backline, hopefully being able to deploy in a corner without too much obstruction blocking its shots.

Mantle of Responsibility gives you an incredibly reliable orders phase, ensuring you pull off those key orders. Try to set up to take advantage of First Fire and Split Fire on the Warlord as often as possible. And between Vanguard Leader and the Corsair maniple trait, the Reavers are excellent targets for Split Fire Orders, letting them pound down shields on one target while they melt away another enemy’s armor.

In terms of stratagems, a Vox Blackout on turn one might not be a bad shout if you’ve used Patience Beyond Measure and your opponent has elected for you to go first to give you further activation disadvantage – you probably won’t be able to First Fire with your Warlord anyway and it will prevent them from hitting it with an Obscuration Barrage for a turn.

While being able to play aggressively and get those important orders off a bit more reliably is useful, Lysanda doesn’t have too much else going for them. If your opponent opts to deploy everything first for those first turn benefits, consider not pushing up in the first turn to help ensure most of their weapons are out of range. Vanguard Leader requires them to play fairly close together, so they’re less likely to try to flank you if they’ve taken that trait.

At the end of the day, though, Lysanda’s rules can support a variety of tactics, so you’re probably going to need to tailor your strategy to your opponent’s list on the day. Just keep in mind that Vanguard Leader can make their main force surprisingly mobile, and Mantle of Responsibility gives them very reliable access to orders when they need them. 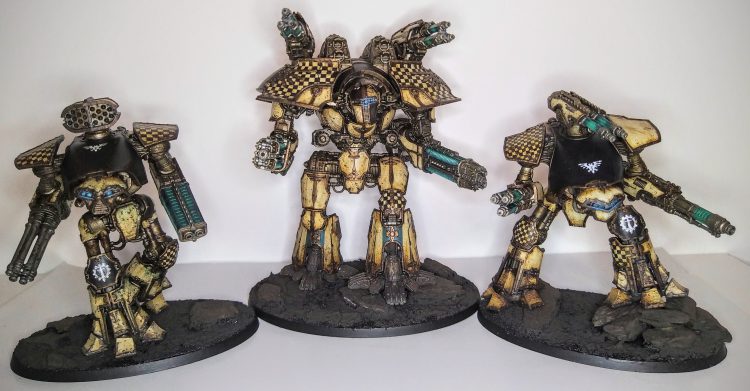 Lysanda’s rules may look like a mixed bag at first glance, but their good tricks are very useful. Between bringing a very mobile core force and more reliable Command checks, they can play a very solid game that can react and adapt to your opponent’s moves as the game unfolds.