Getting Started with Magic: the Gathering Arena

Welcome to part two of our Getting Started series for Magic: The Gathering! Yesterday we covered the basics of getting started with paper Magic on the tabletop (click here if you missed that one and one to know more), and today we’ll cover the electronic side of things, talking about how to get started with Arena.

Magic: The Gathering Arena is Wizards of the Coast’s second attempt at converting the full game of Magic into an online playable format. Released in 2018, Arena gives players a way to play the same game online with an updated interface and free-to-play mechanics. It’s also got a slick interface, adding visual effects and flourishes to play and its digital tools and format make it great for learning the game as well as ensuring correct play and smoothing out timing and memory issues that can be a problem in tabletop play.

You can find Arena here: The Official Arena site

You may be familiar with Magic: The Gathering Online (MTGO or MODO), Wizards’ other online Magic offering. First released in 2002, the Magic Online client offers several features that Arena lacks, such as support for every card in the game, eternal formats like Modern and Vintage, Commander, online drafts with real players, and a redemption program where a complete set of digital cards can be redeemed for real copies. Magic Online more accurately resembles the paper game, but has an older, clunkier interface and while it’s still supported by Wizards of the Coast, Arena is obviously the direction the company is headed. We’ll talk more about Magic Online in a future “Getting Started” article but for now just know that: 1. Arena and Magic Online are not the same thing, and 2. Arena is the better choice if you want to invest in a platform that is likely to be around for the long term.

Getting started in Arena is pretty simple. The game places you into a tutorial when you create a new account, which teaches the basics of Magic using simple mechanics in a limited game setting. Using highlighting, animation, and pop-ups, the tutorial will keep you moving forward, mastering mechanics like playing land and how you use land to generate mana, and then use that to cast spells and summon creatures. You’ll be guided on your journey by a helpful ball of blue-white light, and this little wisp will also offer suggestions for every play.

The first match will place you against an elf, starting with only a few life, and only deals with creatures and a couple creature buffing and tapping spells.

The second match places you at full life (twenty) against a red mage with a goblin deck and only thirteen life to start. The tutorial is designed to force you to play to win, dealing with the red player overextending and you winning as white. It also introduces enters-the-battlefield effects that only occur once the creature is on the battlefield.

The third match faces you against a naga. You will learn about evasion abilities like flying and the concept of enchanting creatures and enchantments that tap and keep creatures tapped.

The final match pits you against Nicol Bolas, one of the primary antagonists of Magic lore. He casts several spells to draw cards and interact with your creatures, such as spells that damage all creatures. If you play carefully you defeat Bolas, and the wisp will give you helpful hints along the way. When you complete the tutorial, you will receive five starter decks decks. 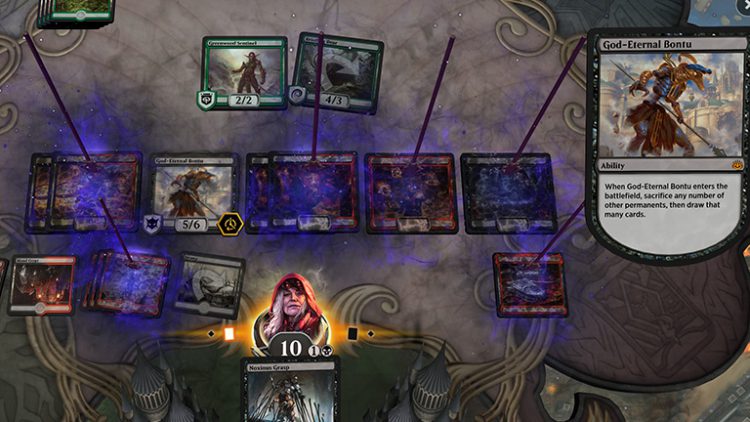 After the initial tutorial ends, you will have a new set of quests to complete called color challenges. There is one challenge for each color where you play with a single color deck. As you play, you earn rewards which allow you to improve the deck. Unlike the first set of tutorial games, you can lose if you misplay. If you are a new player, completing these challenges will teach you the identities of each color and expand your collection. If you are a veteran player, completing these challenges are an easy way to grow your collection with the starter decks.

You can hop in to playing against other people at this time in various formats or practice against more bots via the bot match. At this stage, if you’re an experienced magic player you can put together your own deck out of the cards you’ve gotten as rewards. As you continue to play you’ll get more cards and packs for free. Each day there are daily quests, and there is a set mastery tracker which will reward you as you earn experience. If you purchase a mastery pass then you’ll receive a reward at every level (the lower tier), but it’s not a must-buy immediately – if you purchase a mastery pass later, you’ll automatically receive all the mastery pass rewards you’ve already earned. Note that these set mastery passes expire periodically. In addition, if you play ranked and win games in constructed or limited, you’ll achieve higher tiers for winning, and when the seasons ends (seasons last approximately one month), you’ll earn a set of rewards and be placed into a tier for the new season automatically based on your ranking and tier in the prior season.

Because you cannot trade cards on Arena or buy them off-site from singles sellers, as you open packs (even free ones you’ve earned through rewards) you’ll earn wildcards at various rarities; these can be exchanged for any card of that rarity. In this way you can get the cards you need for a deck without opening tons of packs. In Arena you can’t have more than four copies of a given card, and the game has been set up to prevent you from opening additional copies after you collect four. If you would collect a fifth copy of a rare or mythic rare in a booster draft or any booster packs you open, you’ll be rewarded with gems. Extra commons and uncommons go into your player Vault, a storehouse of bulk cards that can be traded in for mythic rare, rare, and uncommon wildcards. 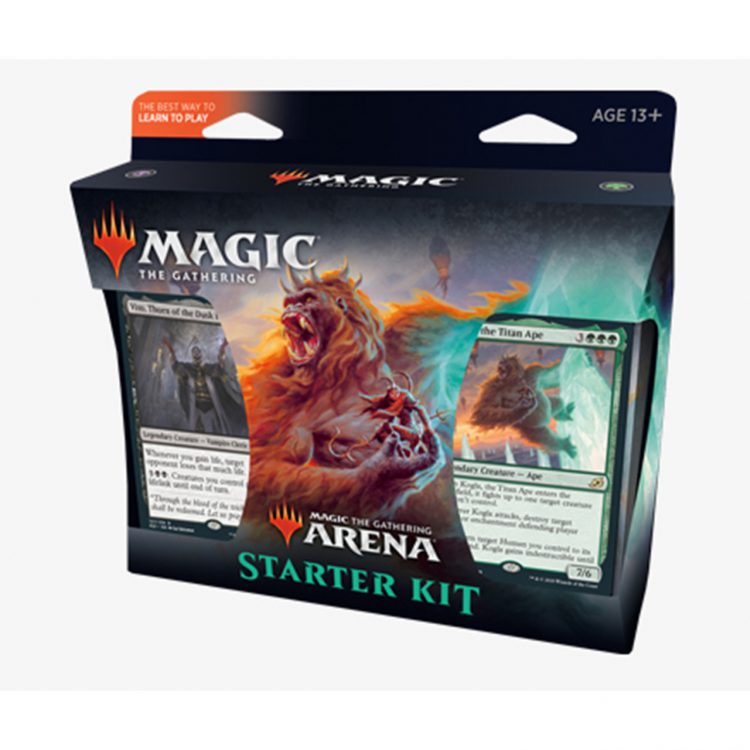 The Arena Starter kit is a new product that replaces the Welcome decks and Spellslinger decks in the paper format. It comes with two decks designed to showcase the game’s more exciting aspects and comes with a code to redeem both decks in Arena. You can currently buy these online for about $10 USD. This is handy if you’re looking to start and buy cards for in both paper and Arena but it’s something you can skip if you have no interest in playing both formats.

As an experienced magic player I found the process of re-learning to play via Arena to be smooth and did a good job of explaining and introducing mechanics at a digestible pace. Once I got through all the tutorials I played some games in the workshop mode and then wanted to settle down and make a deck. I have a friend who encouraged me to play Arena, and he said he hated Cat Oven, so naturally, I built Cat Oven.

Have any questions or feedback? Want to suggest a topic for a future article? Drop a note in the comments below or email us at contact@goonhammer.com.