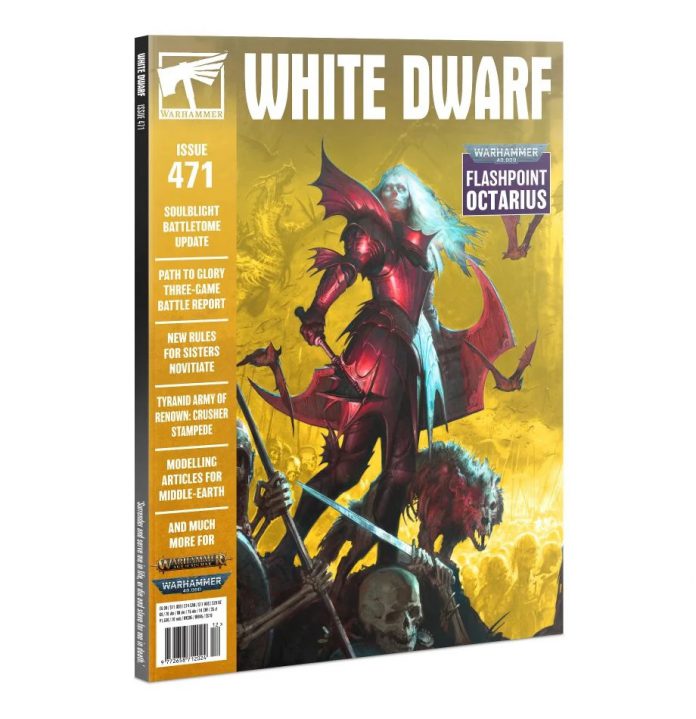 We’re bit late on this one, with all the holiday festivities but better late than never! Last month, Games Workshop released another Tome Celestial in White Dwarf, this time for the Soulblight Gravelords. This one was probably expected, the Tome Celestial serves as a sort of “Get You By” mini-Battletome while you wait for full rules, particularly if you’re raring to jump into Path to Glory without being bound by the meager core rules.

The Soulblight Gravelords Tome launched right at the end of 2.0, with only a few weeks to spare. As a result, the book was written purely with 3.0 in mind and likely won’t see an update for some time. The Tome Celestial format is a nice way to spruce it up a little bit without needing to rewrite the book. The book itself is great, and I feel it’s the platonic ideal of balance that every book should aspire to: Tons of build options and nothing feels broken on the power level of Lumineth Sentinel or Stormdrake Guard spam, but is still very powerful and fun to play. It’s just a great book. So what does this have to contribute to such a book?

A surprising number were added here, three total, two of which can be used by any of the subfactions while the last is aimed solely at Legion of Blood. There’s definitely an attempt here to buff the viability of the generic Vampire Lord, who got a pretty sweet new model with this release but feels a bit underrepresented on the table, instead usually used by a named Vampire like Belladomma or Radukar.

Available to all Soulblight armies regardless of allegiance, it is highly reminiscent of an ability that appeared on the Blightkings in the Maggotkin of Nurgle book, but much more general. When a Hero who isn’t a Monster attacks, you may choose a Summonable unit wholly within 12″ that is also in combat to fight immediately after. It doesn’t even need to be against the same enemy unit! This pairs well with Vampire Lords that are on foot, or other combat footsloggers like Radukar the Beast or the Wight King. Melee foot Heroes have a bit of a bad reputation right now (with some exceptions) and this plays well into Soulblights general desire to have a Vampire supporting their vast legions of undead by joining the melee.

As it stands Vampire Lords on foot tend to hang back and work as buff pieces for their battleline. Which is fitting, but not the combat monsters one might expect. It also makes Legion of Blood, an underused faction a little more appealing and +2 to casting can be pretty competitive with Vyrkos reroll casting. I’m also just a fan of options that let people customize generic heroes to taste, to give them an edge over stock named characters.

These are available to any subfaction when you add a Vampire Lord on Zombie Dragon. Locus of Death lets you affect an extra unit with the Deathly Invocation ability (which by default means 4 units with this trait). It’s…fine? You don’t need too many units to be affected by Deathly Invocation since you can’t target the same unit multiple times, and as a Hero heavy army you have plenty of other stuff to invoke it. Foetid Miasma is quite a bit better, letting you reroll the D6 for damage from Pestilential Breath. D6 damage can be wildly swingy and if you get a 1 or 2 you’ll appreciate the roll.

Like other Mount Traits added in Tome Celestial these are at least an upgrade in the sense that you didn’t have any to work with before so any bonus is a good bonus, but Foetid Miasma does manage to hold its own as a genuinely solid trait.

Hoo boy these are bad. Definitely a blemish on the whole thing. Since being errata’d to no longer require that you bring all of the units together, Radukar’s Court appears to try and make up for the loss by using the carrot rather than the stick. If you bring all of the Cursed City units (not counting Radukar himself) then you get an extra enhancement. Not great, considering all the Heroes in this are named! It’s also not going to justify over 700 points of a grab bag of models, most of which are pretty bad.

Fellwing Flock and Deathstench Drove are a bit more flexible. Fellwing Flock requires 2 Fell Bats and 2 Vargheists (with the ability to include a third Bat and/or Vargheist unit) and grants Swift. Cursed by the fact that Fell Bats aren’t very good and Vargheists only see marginal play as list filler. Deathstench Drove requires a Corpse Cart (With an option for a second) and 2 dire wolves units and 2 Zombies units, which are at least units you probably were taking anyway, and grants Slayers. Both have the dreaded “anything that isn’t Magnificient/Unified” curse and you’re probably going to prefer to put these guys into a Warlord or Battle Regiment. Hard pass.

Honestly feels pretty lazy this time around. As always we get a Twist and a Ruse, the Twist is that on a 1-3 nothing happens but on a 4-6 both players gain Hardened to Death which lets them use Inspiring Presence for free. Whatever. The Ruse is potentially interesting, Gravestrewn Battlefield lets you place an additional gravesite anywhere on the field, giving you 5 in total. It potentially opens up a lot of options and would be interesting if it were say, a subfaction ability but sadly it’s likely to languish here.

A decent grab bag of stuff. You probably know what to expect by now, but if you’ve patiently been waiting for it to come to your army it’s appreciate nonetheless

Taking a cue from the Seraphon Tome Celestial and the Maggotkin of Nurgle Path to Glory rules Summonable units are not added to your roster and instead are picked each fight. You pick 3 for each Mortarch, 2 for each other Vampire Lord and 1 for everything else. A nice rule that fits the fluff, picking up whatever corpses you find on the way rather than treating them as a battle hardened regiment.

You saw the mount traits and may have guessed where this was headed. For the quest, you simply pick a Vampire Lord on Zombie Dragon, and if they kill something they get a mount trait. It’s fine.

Since your battleline are all summoned in each game, they cant gain Veteran abilities. Instead, there’s a slew of unique ones for your more elite units who hang around once the carnage is over.

Spurred Into Action – For Blood Knights, once per game when using Riders of Ruin the unit can run. Surprisingly good! Riders of Ruin is one of the best parts of Blood Knights, allowing them to skip unnecessary fights to get to the action and do a little damage on the way. A few extra inches can make all the difference.

Eager for Bloodshed – For Vargheists, you can either set them up more than 9″ from the enemy or more than 2D6″ from the enemy when deepstriking. It’s not clear if you choose to roll if you must take it, but the way I’m reading it I think you can roll and then decide. Regardless the average roll for a 2D6 is about 7″ which is an upgrade regardless and helps mitigate landing in only to biff the charge and stand out in the open.

Corpsemaster Seneschal – Once per game a Corpse Cart can issue an order to a summonable unit for free. A Corpse cart is a near mandatory buff staple to Soulblight and this makes them even better.

Deathless Abominations – Zombie Dragons and Terrorgheists gain an extra wound. As this is a Veteran Ability you cant give it to a Vampire Lord on Zombie dragon, but its a pretty alright upgrade, if dull.

3 New Territories for your conquering pleasure. The Gravelands let you add 1 summonable unit to your army, and 3 if you upgrade it, an extremely powerful ability especially if you have Zombies to spare. Cursed City is probably the most interesting, allowing you to add 3 Allied units from either Nighthaunt or Flesh Eater Courts (you have to pick one). When upgraded that unit can become your General and it gains the Soulblight Gravelords keyword. A lot of potentially fun combos from that, like a Ghoul King on Terrorgheist to go with your Vampire Lord on Zombie Dragon. The final territory, Bloodgrounds, doesn’t do anything until upgraded but once it is it lets you add an additional Territory, Barracks and Outpost to your Stronghold.

Nothing surprising here, make your On foot Wight King or Vampire Lord their mounted versions. A slightly interesting conceit is if you already have a Vampire Lord on Zombie Dragon you can remove it to halve the cost. So your up and coming Vampire Lord can murder his superior and take his mount. Neat fluff option, but seems largely impractical unless your Zombie Dragon Vampire Lord has taken too many beatings lately.

I would have liked to see an option for a Necromancer to become a Vampire, similar to Slaves to Darkness trying to become a Daemon Prince, but they played it safe here and that’s fine.

You get one new Grand Strategy and 3 new Battle Tactics, as we’ve come to expect at this point.

One new one, Lust for Domination, if you control more Gravesites than your opponent then you succeed. This isn’t bad actually, I can see this being competitively viable. Since you have a lot of control over where the Gravesites are set, and half are in your territory anyway. You’ll want to be careful placing the other 2, making sure they remain where you can easily retain control of them but this is definitely doable given how much control you have over their placement.

Some actual good battle tactics here, the first 2 are incredibly good and will likely come up in games a lot.

Callous Overlord – Oooooh, I love this one. You choose one of your own Summonable units and if it dies this turn then you gain 2 VP. Very fluffy and easy to obtain if a unit is sufficiently weakened. Got a unit of 3 skeletons remaining? Suicide charge them into something you know they can’t win against. You can bring them back anyway, why should you care?

Lust for Blood – If your general (or two other Vampire Lords) use The Hunger or Mortarch of Blood this turn, gain 2 VP. It does say they need to restore wounds so they need to be injured, but if that’s the case you simply need to kill one model with them. Easy to set up and probably something you do as a matter of course.

Unstoppable Armies – The only stinker of the bunch, you need to successfully roll a 5+ on the Endless Legions roll to bring back a unit. Are you really going to bank 2 VP on a 33% chance that requires you to kill a unit first? Probably only if you’re desperate.

A really solid Tome Celestial. A lot of the ideas here are recycled from other books but that’s fine, it’s a great combination of fluffy rules that are also competitively feasible. Much like how I feel the tome is the tome that all other Battletomes should be aspiring to, this is what future Tome Celestials should try to be: A solid collection of fun rules that help juice up an army’s identity to give it more flavor.

If you have any questions or comments please comment below or email us at contact@goonhammer.com.