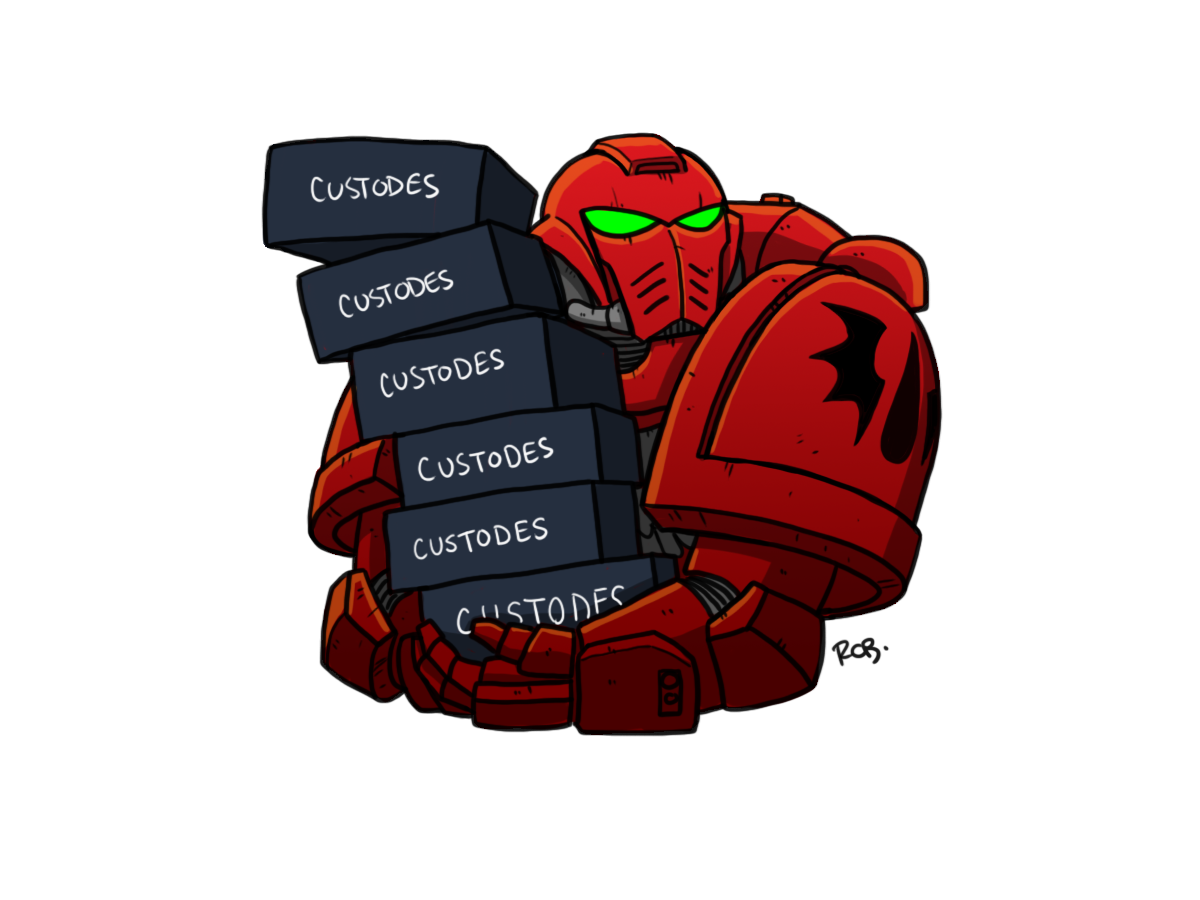 We kicked off the One-Box Challenge recently, our newest and perhaps worst idea. The premise is simple: using only the contents of one single box from Games Workshop, construct a legal thousand point army. This is dangerous and untested new technology, but we remain committed to advancing the state of the art in the 40k meta. Today we’re looking at all the different type of Aeldari. This one goes places, and I will be mad at Condit over it for a long time.

Welcome back to one of our best/worst ideas yet. This week we’re looking at the best armies you could assemble by buying a single box of minis over and over, then we’re gonna have them face off at some point to determine which is the best one. If you missed the general ground rules or the first installment of the series, you can find it here.

The perfidious Eldar make their first appearance. By percentage of units a faction has, this is one of the most expansive, using a full 16% of the Harlequins range. It’s on the expensive side, and will be a complete nightmare to paint, but the idea of spamming in what is supposed to be an elite small-model-count army is too good to pass up. 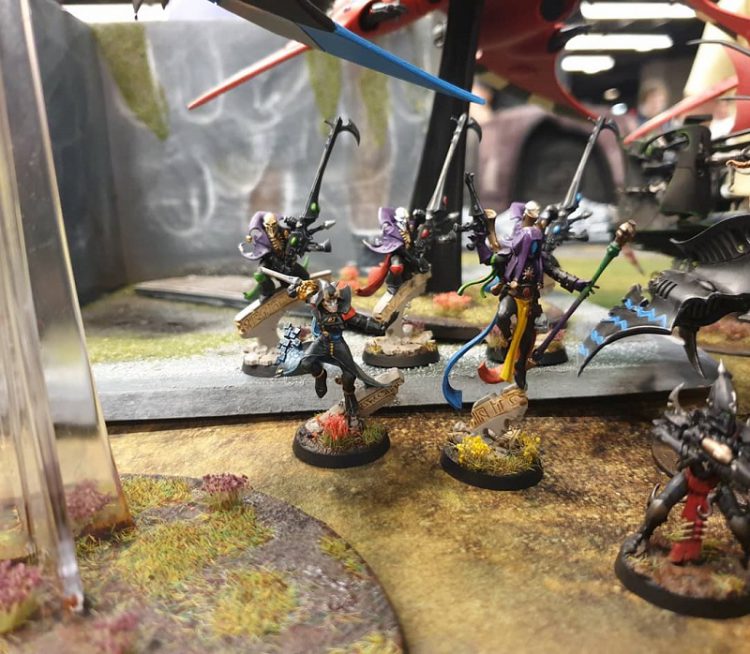 You can really do whatever you want with these loadouts, though keep in mind that with the minimum number of boxes here you’ll have 14 each of fusion pistols, neuro disruptors, embraces, and caresses. You’ve got more Harlequin’s kisses than you’ll know what to do with, though. Feel free to shift the loadouts around to suit your taste.

2 Troupe Masters and a pile of Players is the foundation of a seriously tough list, and this is likely one of the favorites going in. The big problem here is that you lack any transports to get your Players across the board and stuck in, but between Webway Assault and the various tricks available to you, at least a handful of your units should probably make contact.

Honestly, if you wanted to pick up and play Harlequins at 2k, this wouldn’t even be that bad of a purchase, something which is distressing to me on an existential level. You’d wind up with more Players than you’ll bring in most games, but you’ll also be able to source all the fusion pistols you’ll want for a “real” list, so who’s to say whether this is a bad idea?

Greg: This sounds utterly awful to play against, and I am already doing stretches to limber up so I don’t hurt myself rolling my eyes when I read the battle report. It lacks some of the more extreme tricks that Harlequins can pull off, but doubles down so hard on one particular gimmick that I want to puke through my gritted teeth. We haven’t even gone into the Masques and Pivotal Roles, but I’m confident that heinous Elf garbage is right around the corner. This one is going to go far.

It was honestly hard to come up with a list that you could build out of a single box for Craftworlds – you could bash up fancier version of any of the Aspect Warriors and call them an Autarch or a counts-as Phoenix Lord, but neither of those feel particularly great, especially with the limited wargear options on Autarchs, and “converting” a named character when there are real models in the wild seems a bit too much like cheating. This leaves us with two options: Shining Spears and Swooping Hawks. Of the two, Shining Spears seem like the stronger play, and one that might actually hit the table if you wanted to build out from here. Plus, with our two datasheet limit we need something we can convert into another unit, and they’ll make convincing Windriders. 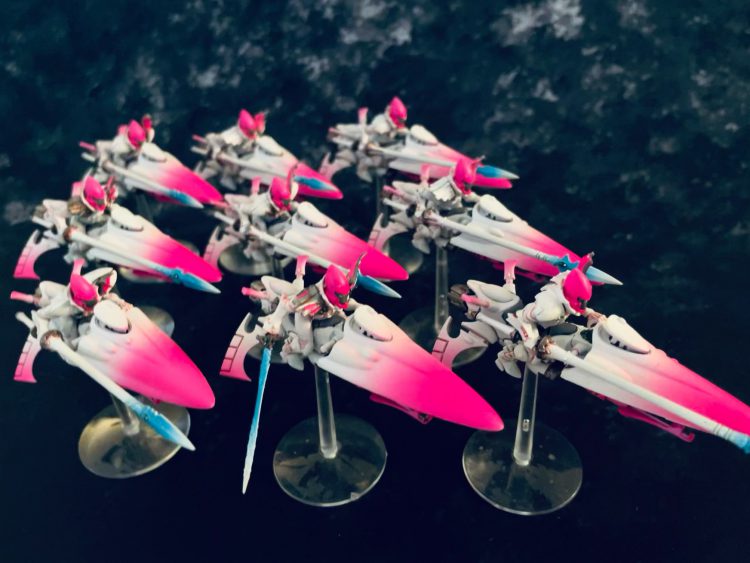 Just give two of your Shining Spears a few more bits and call them an Autarch. Done. For another three, cut off their spears and they work just fine as Windriders. Then have fun running these piles of laser lance attacks around the board and pray that whatever you hit on the charge dies, because otherwise you’re likely gonna have a Bad Day.

Shining Spears are one of the bright points in the Craftworlds roster at the moment, but it turns out that there is such a thing as too much of a good thing. This list is going to move fast and hit hard, but this might be leaning in just a bit too hard. Plus, the complete lack of psychic options here is going to hurt. Having a squad or two of these jerks ready to hunt down whoever you’re mad at today will be useful, but spending nearly $500 on this many seems unnecessary.

Greg: Yes it costs five hundred United States dollars, but it’s also Very Cool. Whipping two dozen jetbikes across the table isn’t something you can put a price tag on, despite the fact that we obviously did. Depending on the match-up, this could either ram directly into a brick wall of armor, or slice right through 125 Catachans, who can say?

And you thought they were bad at 2000 points. Reader, you are not ready for this bullshit.

Rob: Ahhh fuck I just scrolled down and read the list 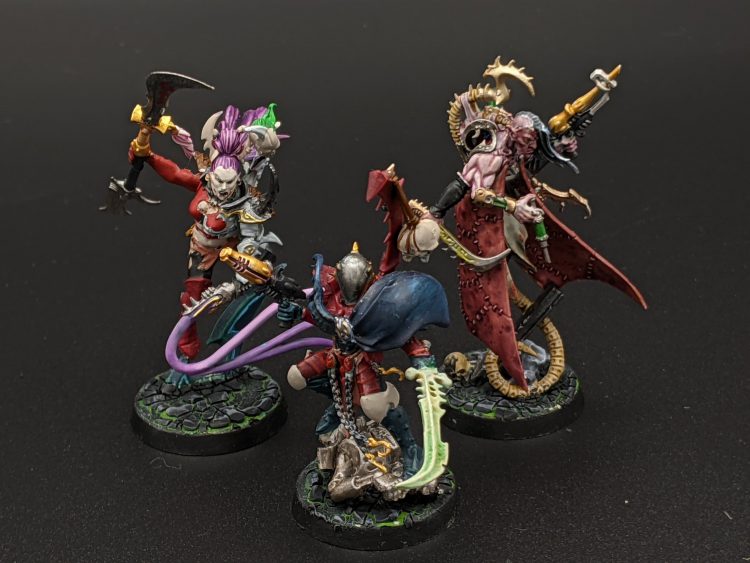 This one needs a bit of explanation. The Ravager kit is just a Raider with an upgrade sprue for the extra guns and other bits, allowing us some flexibility in the vehicle that we build. In addition, each Ravager comes with a bunch of body parts for the gunners, pilots, and a few assorted hangers-on that are intended to be used to decorate your space boats, but make for excellent conversion fodder with some creativity and a sharp knife (as well as a source of 21 25mm bases). Unfortunately, there aren’t much in the way of special weapons for the squads, so you’ll be stuck with just plain splinter rifles. You’ll have to get creative to bash this many infantry out of this kit, but if you’re dedicated to the bit, it’s possible.

Rob: *checking notes on the meta* I’m not even sure it’s possible to build a Drukhari army that isn’t competitive right now

Greg: I hate this so goddamn much. I thought we were going to end up breaking our “no box sets” rule and have to use the Drukhari Combat Patrol as the Boss Fight of this event, but no, it turns out that their transport kit is actually the strongest single-box army in the game. Jesus Christ.

Next Time: The Rest of the Xenos Clowns

That’s it for today, but check out the other posts in this incredibly pointless series if you want more bad ideas. Please, we beg you, do not try this at home. Come back tomorrow when we tackle the rest of the Xenos armies in one-box fashion, and in the meantime if you have any questions, feedback, or suggestions, drop us a note in the comments below or email us at contact@goonhammer.com.