A Very Good Knight: A series of excuses of why it took 241 days to paint one model 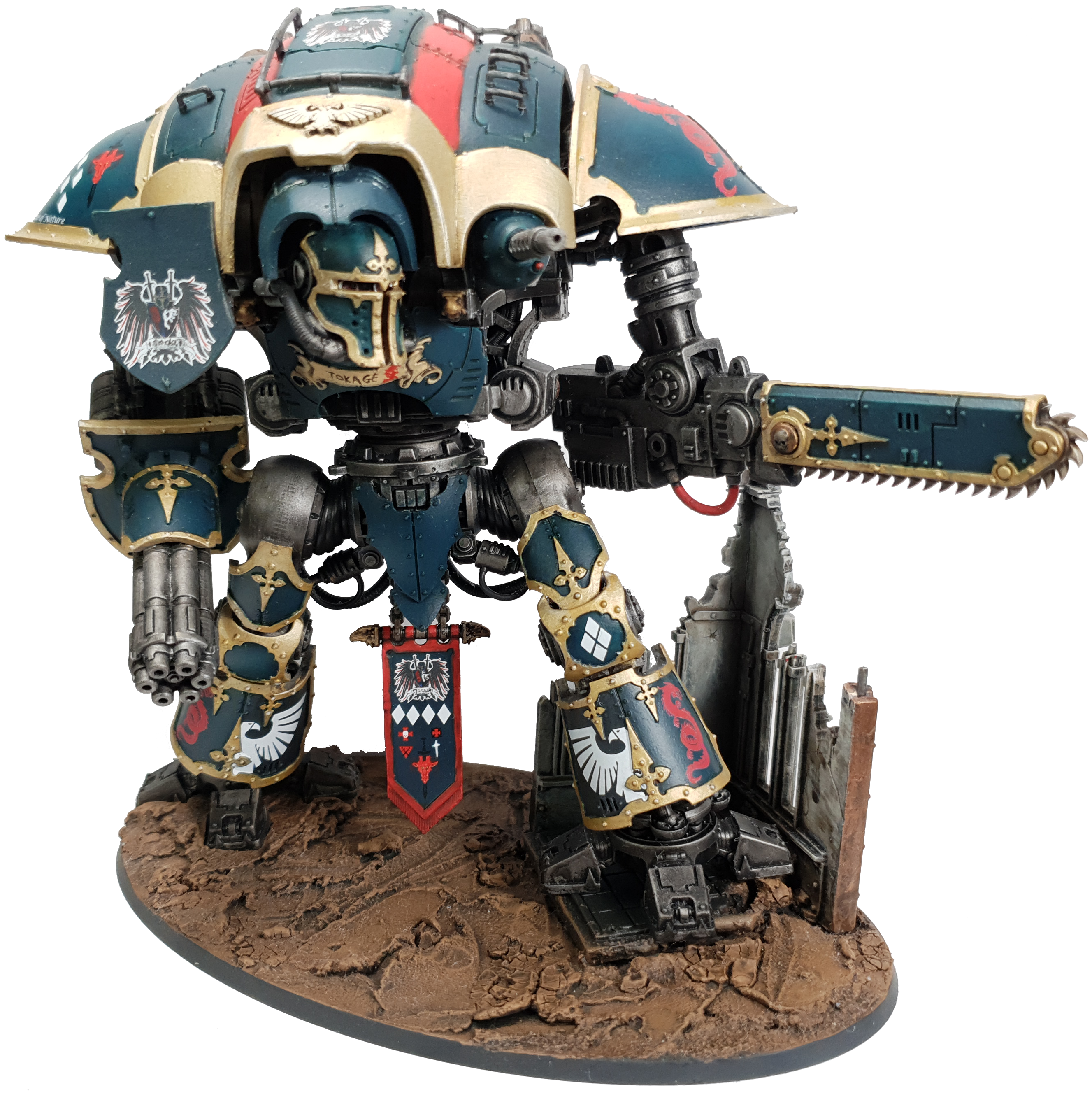 Before we get down to the nitty gritty and excuses, why I painted that way etc, let me take you back in time.

I’m staying at one of my best mates places overnight in Newcastle while karting an oversized van Adelaide to Brisbane for work. This conversation totally happened.

“I started painting again. Psyche said it helps with the whole anxiety and depression business.” I said as I stuffed more pizza into my mouth than what should be possible.

“Uh-uh. Let me guess it’s marines.” my friend replied with a raised eyebrow.

“Yeah dude, totally not going to play any games though or get any of the big huge knight things.”

“What the fuck in a knight? When did they add that?”

“But still, not getting one. They are bad and lame Jay.”

“That’s cool. But you know what’s cooler. My wallet not crying in the corner. Also I have no idea how I would paint one.”

“Nope. Not doing it. You need to do transfers and shit. Last time I did that it ended in tears.” Luckily you have no video form of Duncan saying it would be totally cool to buy a knight for this.

I’ll stay strong. I’m not paying like $200 AUD for a single mini, no matter how baller it is.

Still not going to do it.

Nope. I am a strong independent man who needs no plasticrack.

Well I guess this is going to be a thing. 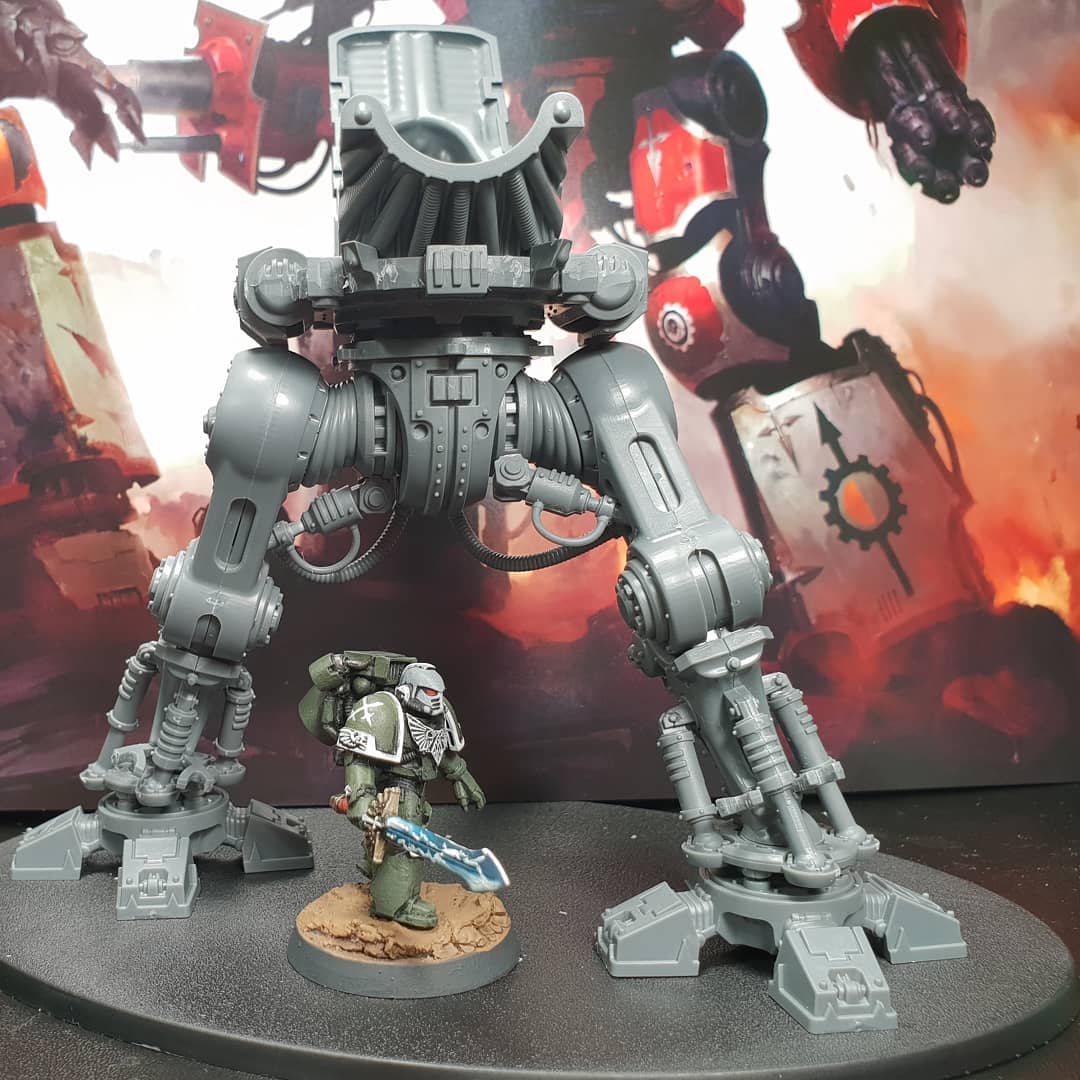 I cracked out this amount of progress after work and prep-ed myself to wake up at 0400 local for the stream start. Assault marine for scale and swordness. 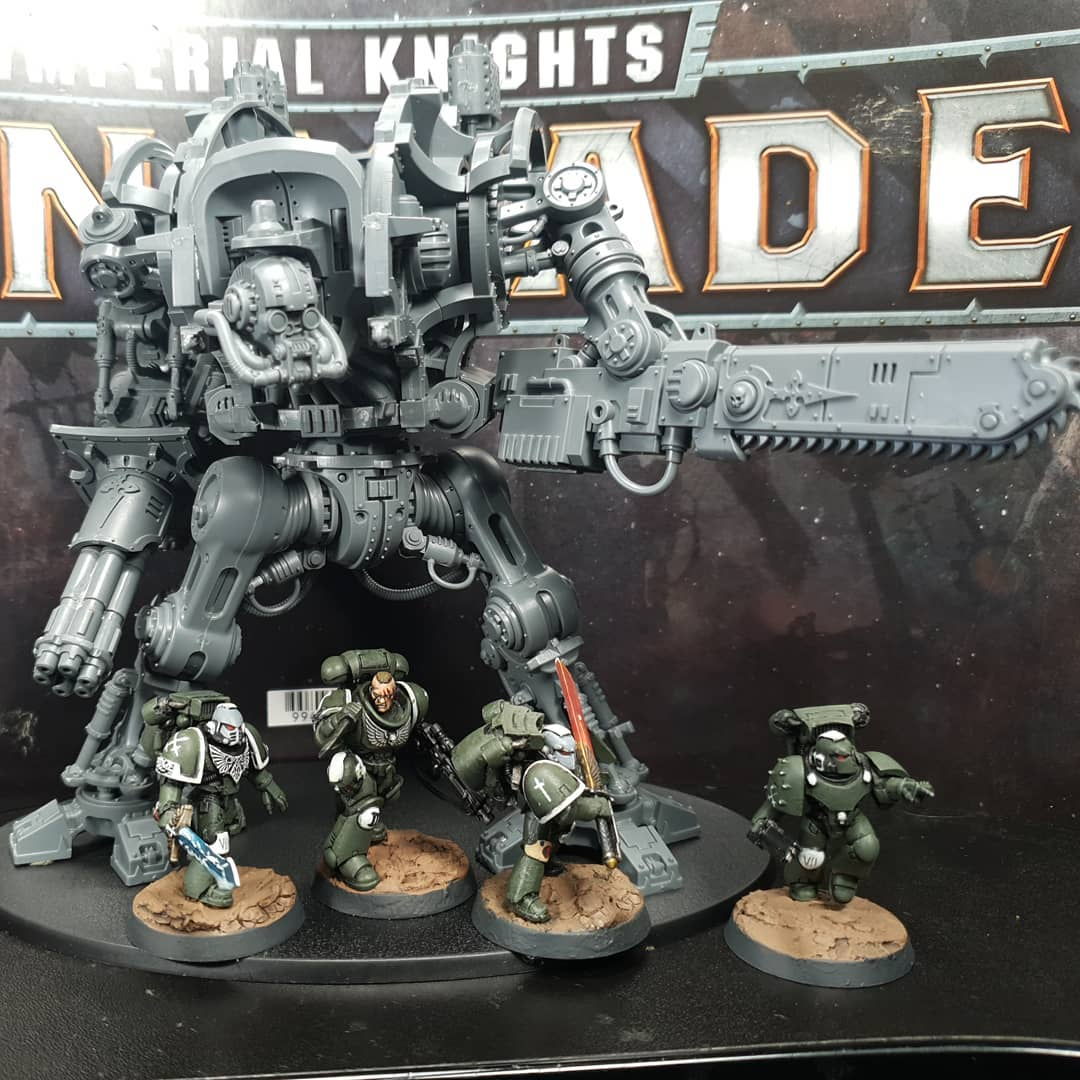 The stream done and the knight somewhat assumed. Pretty good work rate for 4am.

Right back to the knight.

But how do I paint it. I mean I can’t just paint it green like my marines and I would totally want it to fit with them and any other projects on the Imperial side of the fence I might try out in the future.

Respected and good people are consulted.

Math is attempted. Things like ‘secondary colours’ and colour wheels are suggested.

Test schemes are photoshopped. Apps that beep-boop out close colour matches for Vallejo Yellow Olive (god’s own green) are consulted. 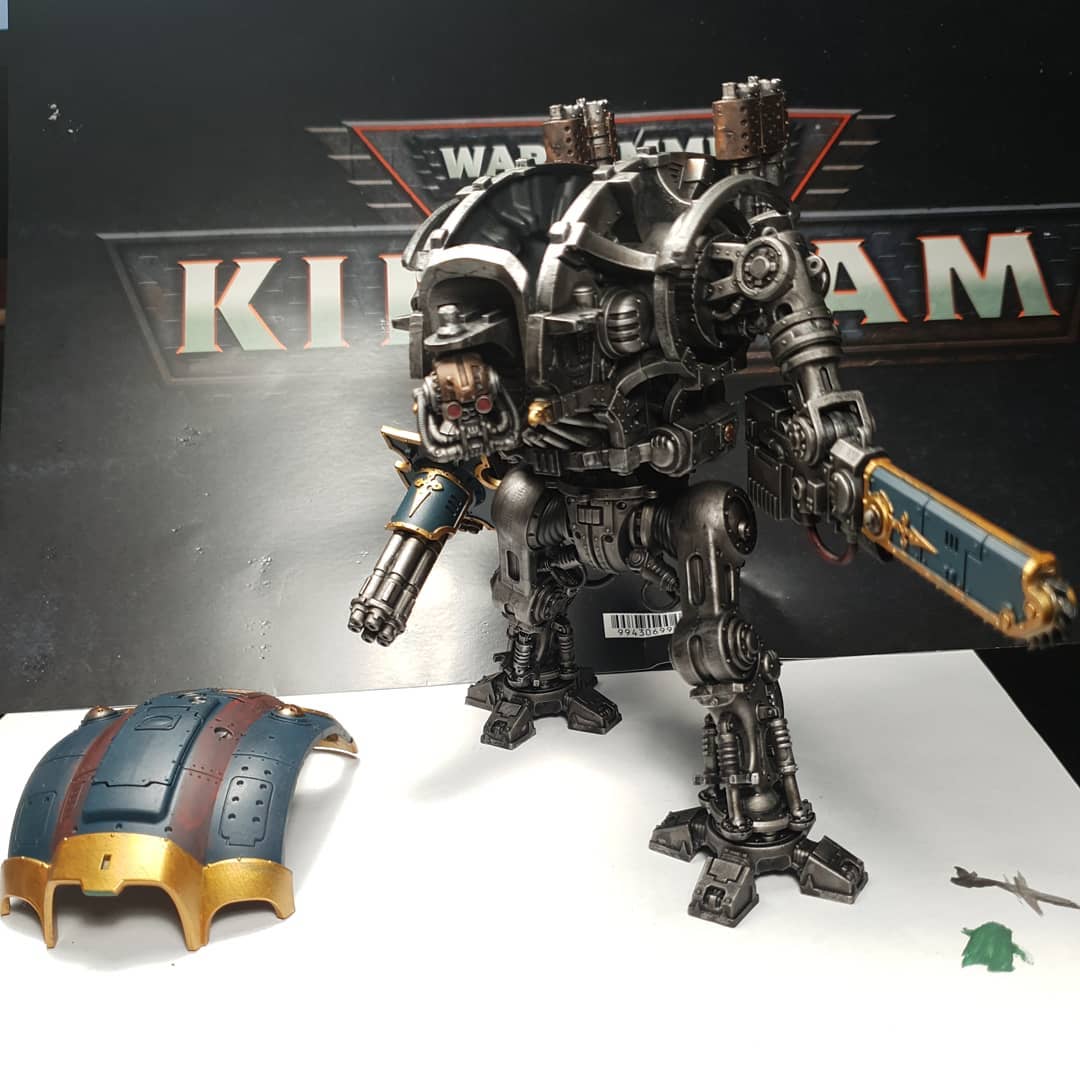 In the end I went with Incubi darkness because it looked good with red. I wasn’t happy with the gold at all (it was too warm!) but couldn’t crack the code to make it something I liked. 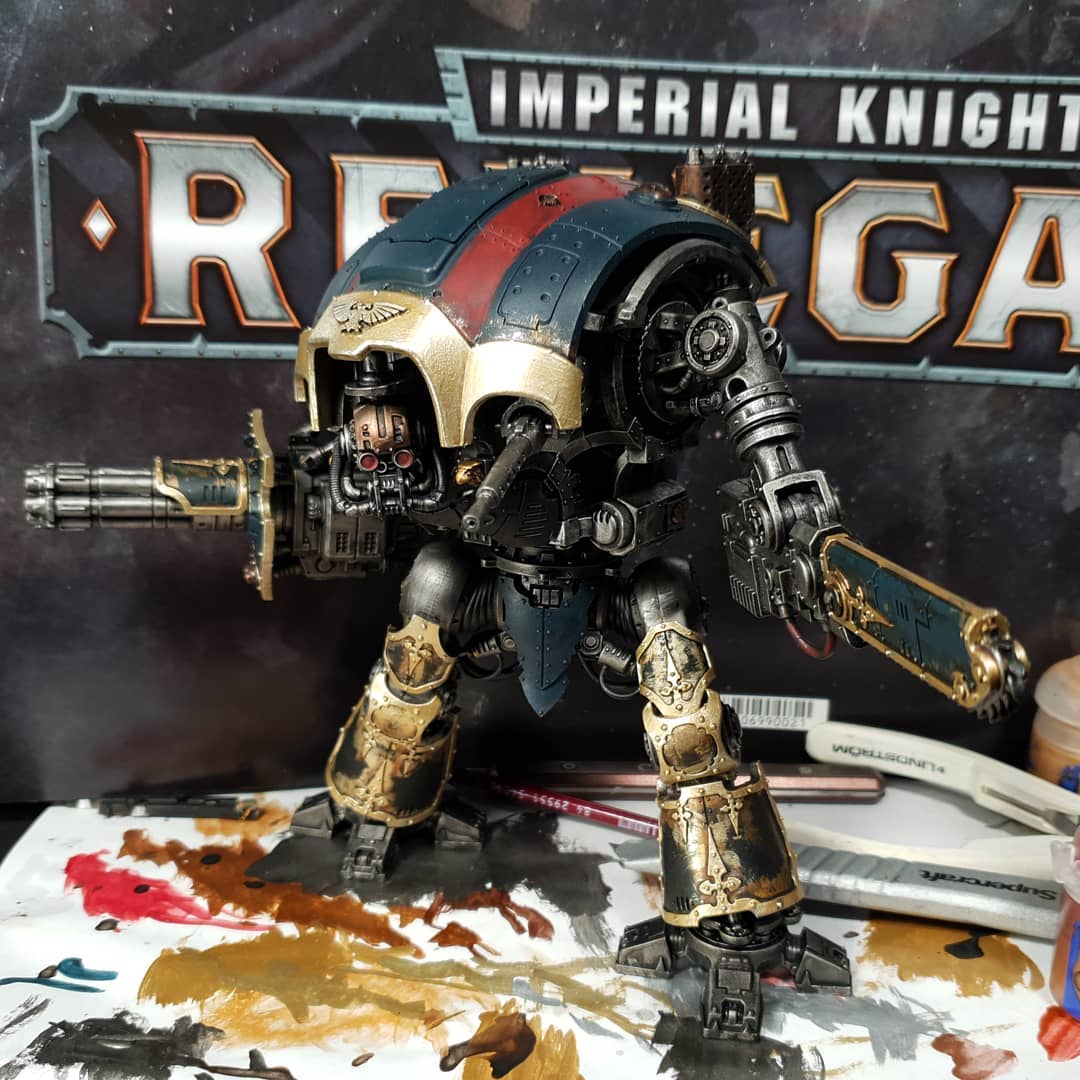 WHY IS THERE SO MUCH TRIM.

At least I found a tinge of gold that I liked.

Well That’s pretty much done. I think using the same red spot colour I liked to have in my armies, plus a green that is similar but different from my marines and dark angles (who if I re-do them will share the dreaded gold trim) tie it to the armies I have while remaining distinct.

Marking wise I could try to freehand this but I reckon I’ll ruin it pretty hard. I guess the Davionic House will get markings later.

It’s not like it’s a 20 year old fear to get over or anything. 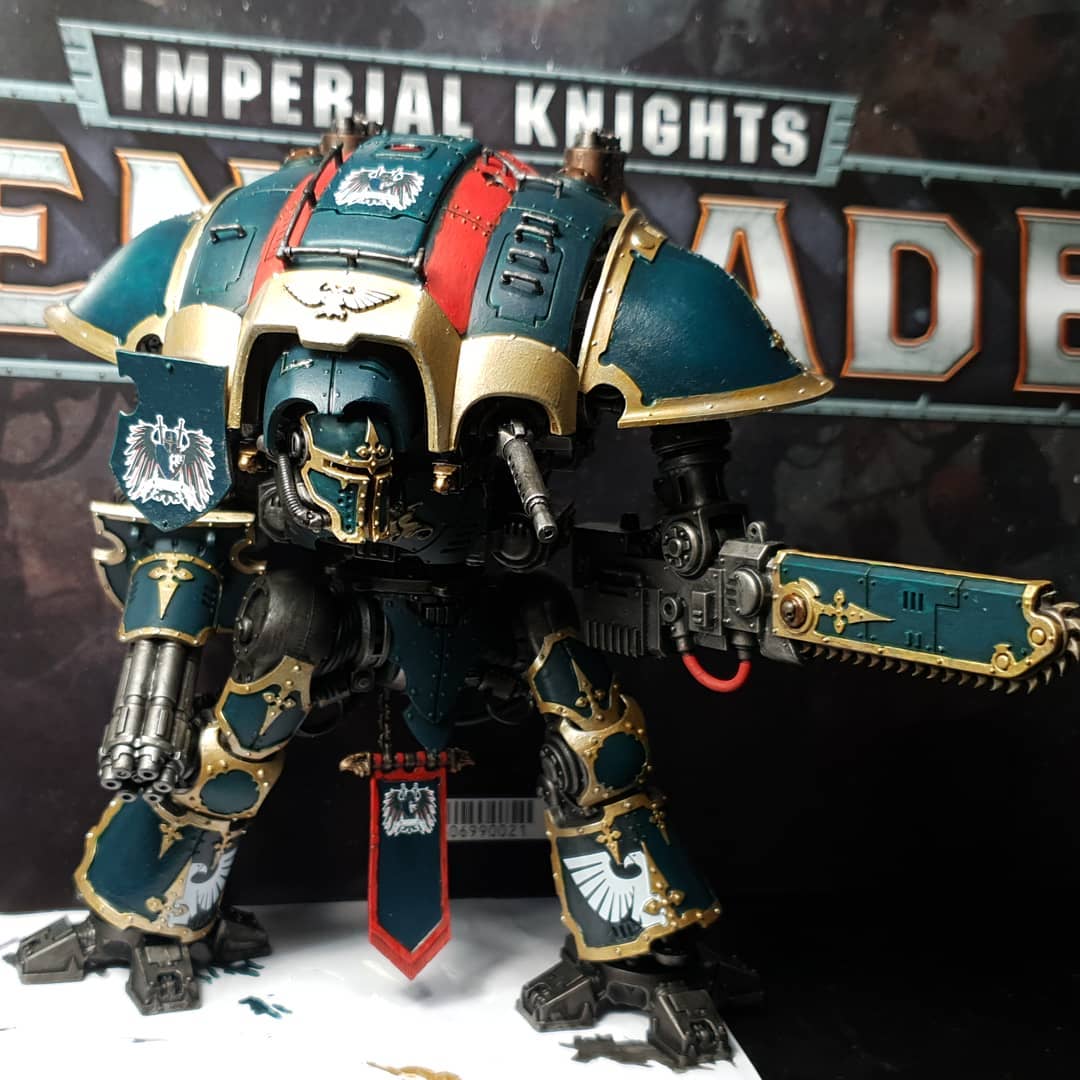 “So it turns out that 30 year old me has way more patience and skill than I did when I was 10. Who would have knew!?!”

On the other hand, now I need house transfers. None of the included ones would fit my definitely not mary-sue Imperial Davonic Republics Knight House. I’ll get some custom ones made! This won’t take long, hell I’ll print them myself.

So Tokage means lizard in Japanese. I’ll totally use a Chinese dragon and make Not-House-Mooshoo. I’m a genius!

Printing them myself on my $50 printer did not work. Better get someone do to this for me! Bedlam Creations  (p.s there is a goonhammer review right here) seems to be run by a cool dude that doesnt do anything morally bad. Let’s go with him.

They are finally here! I’ll get this done in a jiffy!

Well they are on and I have spilled micro sol all over my desk. Better wait for a good day to varnish this sucker.

I’m totally not afraid of this.

I’m totally afraid of this.

Baroness Altria Pend-Tokage
First of her name, slayer of the unnamed 4 beasts, Knight of Imperial Davionic Republic Of Tokage and her stead, The Rules Of Nature

So I used the included transfers to make her personal heraldry and found out you can half arse paint over them pretty easy to make mild changes.

So what I wanted to do was have a number of little features that can provide story hooks on the model.

The obvious one is the custom house, Tokage. Digging deeper I’ve used the banner and heraldry to hint at some personal achievements. The 4 diamonds symbolise big game hunter style kills in close combat, a couple of campaign badges show that she is an experienced warrior and the personal heraldry sums it up. She is a monster killer at heart and like many Davonic warriors she lives and dies by her swordsmanship, ooooh boy speaking of swords, the chainblade continues that theme with bone like chain teeth, no doubt taken from some monstrous fiend in close combat!

There is also a small chapter symbol of the Swords of Davion, symbolising Tokage’s commitment Tiberius Rex and his’ Chapters quest to liberate the Davion sector, however how this agreement came about is a story for another time. It is totally not hinted at all in the chassis’s name, shut up Jay you can’t prove I secretly sometimes like anime.

Speaking of the Swords, I went with the same basing as my Swords of Davion Astartes, who this model with be taking to the field with. I stressed for weeks about the knights fitting with my marines, both current past and future. Lets see how I did:

Excuse the slightly out of focus shot but I think I’ve nailed it! If you do (or don’t) think so or have any other questions or comments, let me know on Twittar or Insta. Anyway, that’s my frist big lad(y) done and dusted. The model was joy to paint and put together and I wish I had the cojones and attention span to finish it faster than what I did.

Also on that note I’m pretty sure I only got one knight in the kit. YEP. IT’S TOTALLY FINISHED, YOU CAN’T PROVE ANYTHIN-