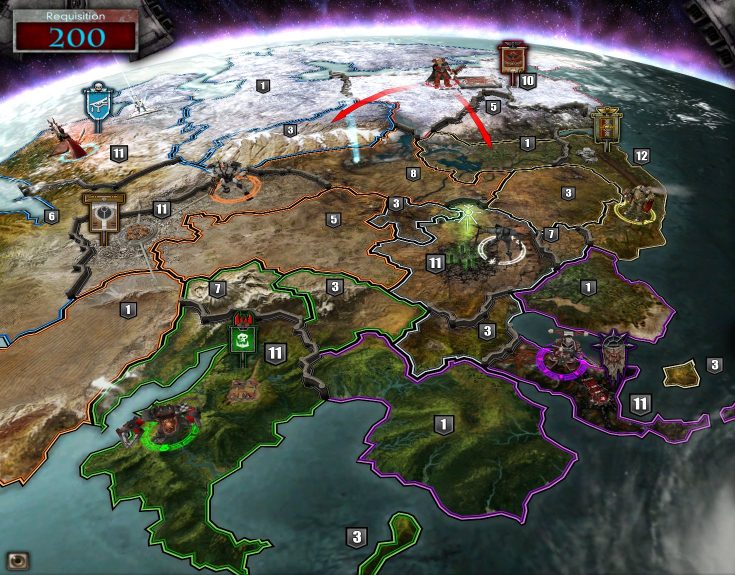 In my previous article about the campaign, I wrote about the campaign’s basic setup and the card system we’re using for conquered assets throughout the campaign. This time, I’m going to talk about the custom warlord mechanics that we’re using. In my prior campaign, we toyed with the idea of doing custom warlords who had more than one warlord trait. Ultimately, this was a fun idea but didn’t really work out all that well — players forgot about their custom warlords and their rules, and ultimately it was more of a narrative device than a gaming one. That said, at the end of our big Apocalypse game to cap off the Paulus campaign, one of my players mentioned that he’d be using his campaign loss as the narrative reason for his T’au commander being exiled from the Empire and becoming a pirate. I thought that was really cool, and immediately wanted to make sure we could incorporate narrative elements like that into our games.

Enter Chapter Approved: Every year chapter approved comes out with sweet rules around custom unit creation that never see much use in my group as a result of them not having points values or being set squarely in the “Open Play” box. Last year’s edition (2018) introduced a set of custom character creation rules that were perfect for what I wanted to do for the Astradus Campaign.

For the Astradus Campaign, I wanted to allow players to build their own custom special characters to play with, so that everyone would be kind of roleplaying their warlord’s rise to glory (or fall from grace) as they fought over the system’s planets. Here are the general principles I had in mind when creating the campaign rules for custom heroes:

Based on these principles, I settled on having players create heroes using 4 abilities, and called the created characters Warmasters. Each Warmaster would also have static wargear options, relics, and warlord traits, have to be approved prior to final use. Warmasters cost an extra +25 points over whatever their final unit cost would otherwise be, and if you include one in your campaign army, they have to be your warlord. I then sent these rules out to my players, along with a request for photos so I could use them to make custom datasheets for every warmaster, so the players could have the rules for everyone’s custom unit.

Here are a few of the results from goons in the campaign, which turned out awesome:

As I write this, we’re almost done with Round 1 of the campaign (and I’ll have an article on that in a couple of weeks), and we’ve got around 25 games in so far using warmasters, with several tweaks having been made. Here’s what I learned about using these, and what I’d recommend if you’re going to try and replicate this in the future:

With the cards printed, our warmasters made, and a sweet rulebook available for download, we were ready to roll on the Astradus Campaign. In my next article, I’ll talk about Round 1, starting things up, and how I handled matching players up. After that, it’ll be campaign updates with ongoing plans and lessons learned. Stay tuned!