5.1: Briefly peaking, and then Brought Low. 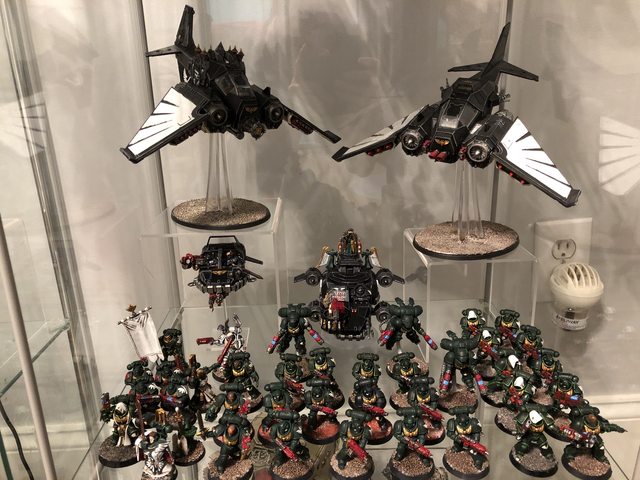 I actually wrapped this up a few weeks ago, but since then I have literally made negative progress.

I thought I was doing great. Contrast helped with getting the last of the marines done, the Darkshroud wasn’t as bad as I’d feared, everything was coming up Milhouse. I sat back to watch everyone else rush through their last-minute painting prep, time to take a big sip of water and run this list by someone who knows anything.

5.2: Literally unable to stop fucking up.

Oh whoa, who could have seen this coming, but I fucked up! Azrael and the Company Vets are on 25mm bases, instead of 32s. So those guys need re-basing sometime before next month. Taken on its own, this isn’t the end of the world, but it sucks because I thought I was done and instead I’m not. That’s butt! This is hell world, and I’m puke.

I put that aside, and sat down for a couple of practice games with TheChirurgeon. Despite reading over various printed materials, I’d actually never run this army in a game or played the NoVA/ITC missions, and I maybe skimmed over the article here on Goonhammer that talked about picking secondaries, so this exercise seemed like a good way to get familiar with the format.

The first game was Mission 1, with 6 objectives and Dawn of War deployment. I went with Progressive scoring, and for secondaries, I picked:

Then I deployed in the classic Space Marine Battle Pile, and as you can see, it went perfectly:

The Kytan murdered half my stuff, and then it died and blew up and killed the other half. Cool as hell.

I’m not going to bother with a detailed batrep here, because you already know how it went. Doubling up on the “shoot big stuff” objectives was dumb, since he only had one Titanic unit, and I had the “10 wounds” one already. Also, I deployed like an idiot. Progressive scoring was a good idea – I assumed that I wouldn’t have enough models to score everything at the end of the game, which ended up being accurate. In fact, after turn 3 I didn’t actually have anything at all on the table, which at least meant we didn’t run over on time. Still, we learned a lot about ourselves, and our armies, and probably had fun too.

I won’t lie to you, reader: there was a period during turn 2 of this one where I considered dropping out of the GT entirely. It’s not because I was getting creamed, though I absolutely was. No, I’m used to that. I felt completely out of my depth, and after about the fifth time that TheChirurgeon had to remind me how the game works, I started to feel like a) he was going to laugh me off the table, and b) I would deserve it. In the end, I walked away more convinced than ever that I’m going 0-6 at NoVA, but also with a better understanding of just how different a beast tournament-level 40k is. I took a minute to get my shit together, took a deep breath, and went back to getting rocked. Obviously I am glad this happened here instead of at the real event, so there’s that.

Our second game went better. Mission 4, Hammer and Anvil. I stuck with Progressive scoring, but mixed up my secondaries to take “kill 10 wound models”, “kill a troop”, and “basically get Linebreaker every turn”. The Kytan and Discordant worked for the first one, the Cultists and his Engineer-ed up CSM for the second, and I just parked a jet on his end of the table until (spoiler alert) it got blown up, for a couple of points there.

I deployed better, with a proper screen on my Hellbois and the characters less out front. Better, but not great: the Ravenwing Talonmaster died first turn because I put him way too far forward. I also deferred to go second, for some reason? The jets have done well for me, and the half-dozen overlapping auras on the battlepile are as hilariously stupid as they are effective.

I did do better remembering my Auras, and I managed to take out the Kytan again, but the Lord Discordant is an asshole so I lost most of my dudes again. Still, even after 6 turns I wasn’t tabled. It ended up being 24-11 or something score-wise. Not great, but not terrible.

I feel better after this, somehow. I am still one hundred percent going to die IRL at NoVA, but I have a better idea what my rules are now, which is all I really wanted out of the GT, is not to waste anyone’s time. The army itself I think is solid, but I can’t overstate how good of an idea it was to get some games in with it, along with trying the missions, ahead of time. Having that context, instead of walking in and instantly being overwhelmed by new information, makes me very glad that I finished painting early enough to focus on games.

So now I just need to re-base 6 guys, and then I can do nothing but play practice games until the end of August, right? Definitely I didn’t do anything stupid that might distract myself. Clearly I did not do that.