Battle Bros 2021 Year in Review: Look Back in Anger 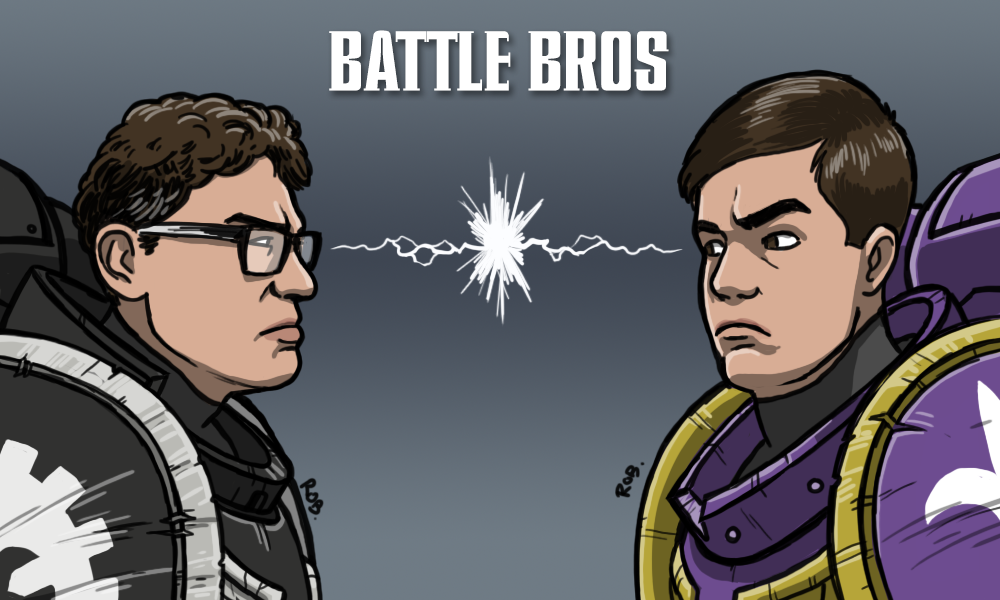 Battle Bros is an ongoing bi-weekly column where Drew (PantsOptional) teaches his brother Chris (head58) how to play Warhammer 40,000 but somewhere along the line they lost that thread and this is what we ended up with instead. Catch up on their past adventures here.

CHRIS: Welcome! If you’re reading this I have to assume that you are trapped at an unpleasant relative’s house for the holidays and have already read through everything else on Goonhammer Dot Com in an attempt to stave off terminal boredom/look busy and avoid your family. We’re so, so sorry that it’s come to this.

DREW: There’s a nonzero chance that one of us is the unpleasant relative in question. In which case, I am not sorry even a little and I expect a Thank You card after this is over.

CHRIS: Word came down from the Goonhammer High Command in their lofty golden Orbital Plate that we should get in on this “Year In Review” thing. Well, if you go back and read Season 2 of this column (not recommended) you’ll get a pretty good sense of my year in Hams. The first half of the year was Orks! Orks! Orks! as I frantically collected and painted up about 1000 points for the column. Please, don’t ask me how much more I have still unpainted.

DREW: I lost count of what you’ve desperately tried to sell off in an attempt to undo the harm you’ve done yourself. If I had to put a number on it, I’d guess you maybe have 2500 points, if which maybe a third are good and cool units you could ever actually use.

Fortunately I think the only Iron Hands stuff I did all year was acquiring a Drop Pod which, well here, it’s easier if I just share this:

DREW: Do you remember what I just said about good and cool units? At least trading stuff that could be good for you in exchange for a painful experience is entirely on brand for either of us.

CHRIS: I mean, I’d always intended to get Devastators, and it seemed like a good trade to me. Of course then I needed to buy said Devastators. And because all my Firstborn are in MkIII armor as the Omnissiah intended, I had to buy a box of MkIII marines, spend time and effort getting the heavy weapons to fit those bodies (and modify the backpacks to have the more conical MkIII exhaust ports, because I’m not a goddamn monster), and then track down some extra multimeltas because two is never enough… Surprising exactly no one, a trade for a cheap Drop Pod turned into a Whole Damn Thing.

Also the Drop Pod wasn’t put together very well and I had to pin/magnet a couple of the doors. Fuck my life.

DREW: Having put one together myself, you’re not missing a lot. Other models may have been more of a pain in my ass but for some reason painting my Drop Pod was extremely onerous. I’m pretty sure that in Purgatory you just work on Drop Pods until your fingers wear to the bone and drop off. I look forward to it.

CHRIS: I’ve also painted a ton of other stuff this year – lots of Marvel Crisis Protocol, and a ton of super adorable chibi Marvel United figures which are an absolute blast to paint. I’ve actually had my second most productive year since I started keeping track. I can beat my old record if I can finish (quick math) 32 more models before the end of the month. Maybe I should pick up the Pariah Nexus and just crank out some of the Goonhammer Model Of The Year nominated “terrain.” What do you think? Can I pull it off?

DREW: If history is any indicator, you can absolutely pull it off. You might even paint some models too.

My year in review is much the same. We did the Battle Bros Season Two back in… was it Spring? Summer? The void has devoured all sense of time. It feels like it’s been a thousand years since we published the final column, but this hateful calendar says it was only June. How dare.

Anyway, not long after that point I moved, and while that process was slightly less mentally draining than painting the Drop Pod, it served to kill my hobby progress dead in its tracks. Everything got packed up and moved so a lot of stuff was out of sight and out of mind. I sort of teased my way through Contrast painting another ten cultists but my heart wasn’t really in it.

CHRIS: Oh the horror. Batch painting ten models. How did you ever survive, he says looking at a pile of 90 Boyz.

DREW: That’s exactly the point! Just ten models and I couldn’t find the motivation. All that changed due to a little screw-up though. Without getting too deep into the details, a shipping error from an online retailer resulted in me getting some free unexpected reinforcements in the form of some basic-ass Chaos Space Marines. While I was a little surprised to see that the models from the box set are radically different from the Shadowspear/Star Collecting models, I sure as hell wasn’t disappointed and I got down to assembling and painting them thinking everything was coming up Milhouse.

Here, Dear Reader, is where I fucked up hard, and where you can learn a lesson from my shame.

I did this for every single one of my other armies, even the Tau that my youngest child expressed interest in and then promptly abandoned after I painted the fuckers for them. For some reason I never did it with my Black Legion, even a little, and so after edge highlighting all the black on my dollies I realized I had done so with a color that was far too light – Stormvermin Fur instead of Skavenblight Dinge. It’s okay, edging is cool and good these days, and absolutely something I enjoy doing for hours on end.

CHRIS: Nope, not even going to rise to that bait. Not even worth it.

DREW: I also utterly failed to complete a challenge model from our FLGS in time to turn it in for the holiday party. Each model was in a blind bag going in; you got assigned one random infantry model, a main color, and a basing scheme. Mine was a Space Marine Captain who had to be gray on a cobblestone base, and when I read that combination my soul crumbled away and fell off. I don’t know if the color/basing combination made me put it off so long, or if it was just that I was jazzed to work on my new spiky dolls, or if I’m just terminally late for everything. Let’s say all of the above.

I did get it done eventually, treating it as time to play around with some colors. A gray model on a gray base needed a pretty strong pop to be anything but visual oatmeal, so I went with the classic movie poster colors of orange and blue. Y’all can be the judge as to whether I stuck the landing.

CHRIS: You have no idea how much it pains me to say this, but with the parameters you were given to work within that’s solid. The high contrast orange and blue were a good call.

DREW: That’s us all told, Dear Readers. But to round out the year and start the new one off right, there’s one last thing. Look, we talk a lot about how bad/dumb we are and that the column is just the two of us yelling dumb jokes at each other about stuff no one wants to hear, and when we interact with you we express confusion and befuddlement as to why you read this in the first place and suggest that perhaps you shouldn’t.

But much like wrestling or the value of the dollar that’s just a fantasy in which we choose to engage. The truth is, we’re glad you’re here and we’re glad you like it. We might not be great 40k players, or even particularly good ones, but we get to make some folks’ days a little lighter – maybe even put a smile on some faces – and it’s all worth it just for that. Thank you. We couldn’t do this without you; it might just be that, deep in your hearts and ours, you’re all the next member of the Battle Bros.

Have any questions or comments? Want to try and bully the Bros into making a Claymation special? Drop us a note in the comments below or email us at contact@goonhammer.com.