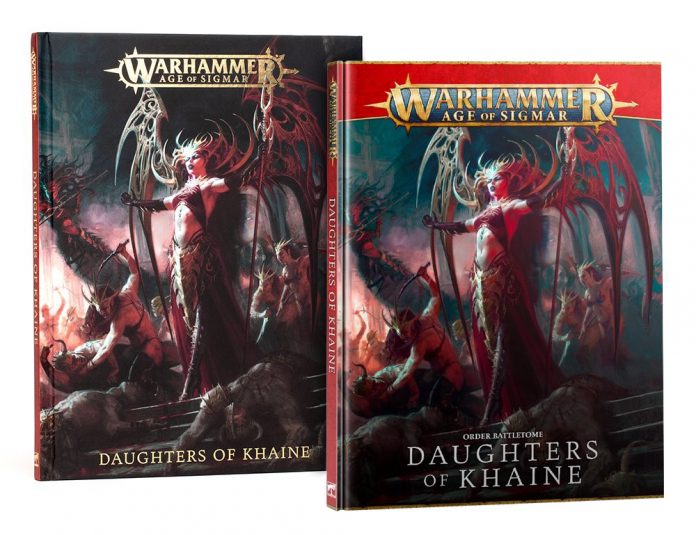 As always, we’re following up our rules review of the new Daughters of Khaine battletome with a review of the Path to Glory rules. If you missed our review of the tome, you can find it here.

The Daughter’s primary Path to Glory campaign is gladiatorial combat. After each battle during the Aftermath step, you can nominate a unit to be a contestant in a gladiatorial battle. It can be a Hero or Battleline Unit. A roll of 1d6 determines what happens to them.

Heroes risk injury but can gain renown, and on a roll of 6 you can push your luck. If you’d like, you can roll 2d6 and risk killing the hero outright. Whether they live or die, you’ve got the potential to earn up to a whopping 12 Glory Points straight out. I could see this tempting me…

Battleline units participate in Massed Combat. It works the same, roll 1d6 and consult the table. You risk lots of casualties but higher rolls give renown and possible glory. I think personally I’d go with the hero most of the time, as you have more control and the risk is lower overall; a rapid burst of renown (if you survive) could be a lot of fun, however!

There are 2 quests for the Daughters of Khaine

Cauldron of Blood – Select a Hag Queen or Slaughter Queen and set them on the path of murder. Every time they take out an enemy Hero you’ll earn Quest Points and once you’ve got enough you’ll get a discount on a Heroic Upgrade for that unit.

Cauldron of Blood is very thematic, every Daughter of Khaine is united in their domineering lust for power. Looking to offer only the greatest sacrifices you’ll be rewarded with Quest Points each time you slay an enemy hero. This quest embarks your Hag Queen or Slaughter Queen to stride out to take what theirs. That discount on Heroic Upgrades for your hero is a fitting reward that Morathi would bestow on one of her finest generals.

Shadow War – Classic “unlock a battleplan” quest here. Win some games, then you get to play the included “Divide and Conquer” battleplan with your army.

Where the Shadow War quest really shines is in that regular gaming group setting. If you have two regular opponents to play alternating games with throughout your Path to Glory campaign to really build that narrative then the included “Divide and Conquer” battleplan is going to feel like that fun crescendo of your campaign. The three of you finally meet on the battlefield and your villainous hand is revealed as the one manipulating the two players throughout their war as you rush to deal the killing blow.

Zealots – Once per battle this unit can add 1 to the Round Number for the purposes of determining what benefits they receive from Blood Rites. Notably, it is cumulative with other similar effects.

Swift-Footed Murderers – Only Witch Aelves are eligible, but this grants them a once per game charge re-roll. Get stuck in and start stabbing.

Bloodthirsty Assault – Sisters of Slaughter can take this boon; once per game following a successful charge you can add 1 to Attack and Wound rolls for when you really need something to die.

Sudden Deadly Assault – Khainite Shadowstalkers can pop this off to gain Strike-First for a single combat phase.

Deadly Doomfire – A nice little ability for your Warlocks. It can only be used the first time you successfully cast Doomfire, however it lets you use 10 when determining how many models are in the unit.

Cold-Hearted Killers – +1 to Wound once per battle for your Melusai.

Muderous Precision – A Khinerai unit with this ability can drop out of the sky more than 6″ away from an enemy unit instead of 9″. Brutal!

Daughters of Khaine armies only have 4 specialty territories.

Gladiatorial Arena – Ah yes, home turf advantage! If you’ve got this territory you gain additional Glory in the aftermath step and gain the ability to re-roll your Arena rolls. It’s good to rule. Once upgraded, the additional Glory is increased.

It’s a simple but effective rule to increase your odds on those Arena rolls. Daughters of Khaine are willing to put their lives on the line for reputation and that sweet renown. There’s nothing wrong with stacking those odds in your favour though, and that re-roll could be the difference between life, and death.

Khainite Temple – Once upgraded you can increase the Unit limit of your Roster by 3. This is free to upgrade, however you can only do so once you’ve scored a victory on the “Ceremony of Blood” battleplan.

Khainite Temple is a pretty minor benefit but I’m all for upgrades that reward you for using the content in the book. You’ll be bringing something unique to the table with the “Ceremony of Blood” battleplan as you dare to enact this flavourful ritual. It’s a good incentive to use the battle plan regardless of which quest you’ve chosen to embark on.

Scáthborn Lair – Increase your unit limit by 2 (or 3 once upgraded) but can only be used on Scáthborn units.

Scáthborn lair is neat if you’re building your roster that way, there isn’t too much else to say about it here though.

Free City Shrine – This is my favorite of the four. It increases your number of available allied units, however once upgrade it does a little bit more. An allied Warlord has become a puppet of the Blood Queen and can be your Warlord. It also gains the Daughter of Khaine and relevant subfaction keywords!

Free City Shrine is exactly at home in Path to Glory. Your coven has established a shrine within a new territory inspiring new followers to the lure of Khaine. This is a wonderful opportunity for you to really put some flavour into your Warband. This upgrade allows an Allied Warlord to declare fealty to the Blood Queen, and can then be your Warlord?. Love this. A great option to break out the Blood for the Blood God and paint up something new for your Warband. Could your shrine be in one of your gaming group’s cities? It all fuels that narrative fire that Path to Glory is all about.

These let you remove a hero from your roster and replace it with an upgrade warscroll. Hag Queens and Slaughter Queens can hop aboard a Cauldron of Blood, and a Bloodwrack Medusa upgrades to a Bloodwrack Shrine.

This does come at a cost of renown and glory, however as noted above the Cauldron of Blood quest can make this cheaper. You also have to ensure you have room on your roster for all of the new Warscroll’s types.

That discount makes you feel like there’s more at stake when you embark on the “Ceremony of Blood” battleplan. Your Warlord can really feel like they’ve earned their upgrade if they emerge victoriously. Incentives like these inspire great hobby opportunities to paint up a new version of your Warlord atop their sweet new ride. Maybe with some of those battle scars they earned on their Arena rolls.

Ceremony of Blood – This is the battleplan relevant once you’ve discovered a Khainite Temple. In order to gain its benefits you must consecrate the temple in…yeah blood what did you expect? The Daughters player will play the role of the Ritualist, setting up their forces around a large Ritual Cauldron and 4 Fonts of Blood. The Usurpur will attempt to destroy the Ritual Cauldron, however with control of the Fonts the Daughters player can heal the Cauldron. Representing their commitment to ending this fell rate, there is a handy little ability the usurper can leverage to return destroyed units to the battlefield.

Divide and Conquer – This is an interesting battleplan in that it requires exactly 3 players. The Daughters player embarking on this as a result of their Quest is attempting to crush both other players, and gets to do some pre-game damage to represent weakened foes. The other two players are simply trying to score more victory points, though they will want to work together to minimize the impact of the Daughters player.

Let There Be Blood

I’m glad the Battleplans in this book feel unique and creative, because overall this Path to Glory section is a little anemic. The core mechanism of Gladiatorial Combat, while appropriately thematic, really just boils down to a single roll of 1d6. Coupled with territories whose primary impact is roster size increases I think this book asks a little more of its General’s imagination than we might hope from a narrative offering.